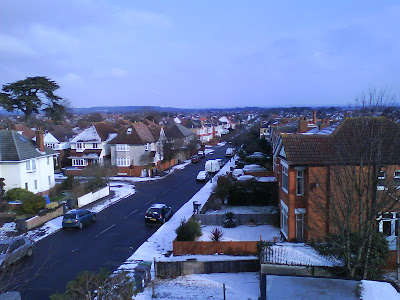 Aside from my travels, I don’t often see snow these days, and inspired by finding these old photos recently, it’s time to reflect on my last Winter living in England. The above photo, stunning was taken from my bedroom window during the snow in Southbourne, Bournemouth in February 2009. 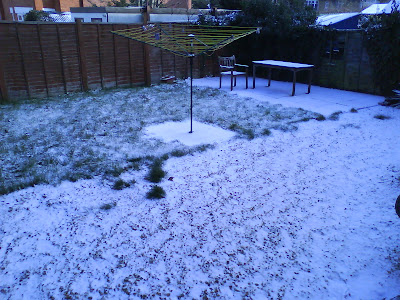 Even living in the south of England, snow wasn’t guaranteed every year. Our back garden at Arnewood Road here covered in the white stuff. 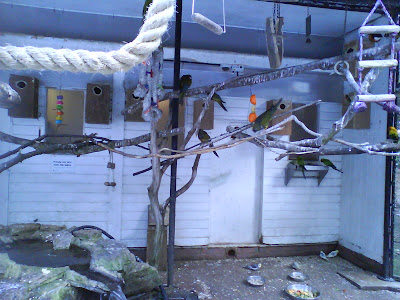 At the time I worked in Bournemouth Pavilion Theatre and Bournemouth International Centre as a barman mostly (amongst other things) and took a few photos during the day in and around Bournemouth. It was as well I did, as I didn’t realise at the time that my next 4 winters at least were destined not to be spent in the UK. Above an aviary by Bournemouth Seafront Gardens. 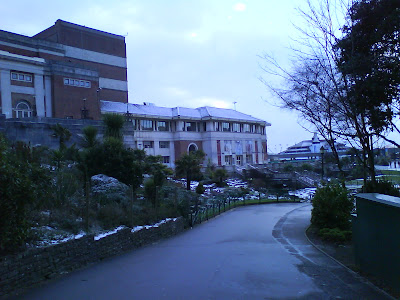 The walkway between the Pavilion Theatre on the left, where I worked and the gardens. 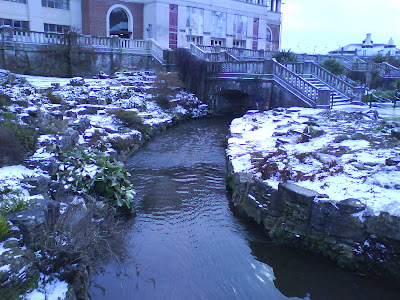 The stream that runs by Bournemouth Pavilion. 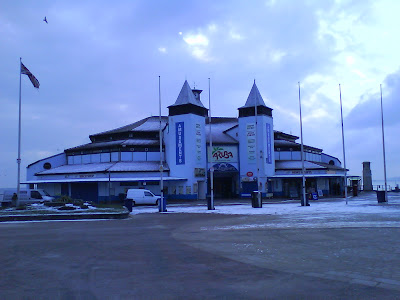 I worked in this building manys a time, selling ice creams, sandwiches and drinks. I also worked in the amusements arcade a few times (a fact I forgot until I saw this photo). It’s nice to see the beautiful seafront of Bournemouth in snow, rather than its more famous sunshine. 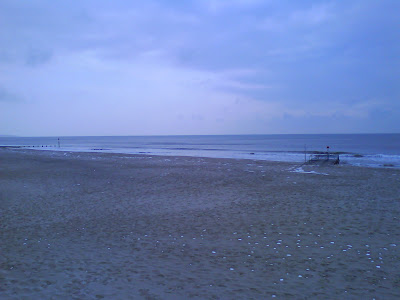 Not a soul braving the snowy winter cold on Bournemouth beach. Back in February 2009. 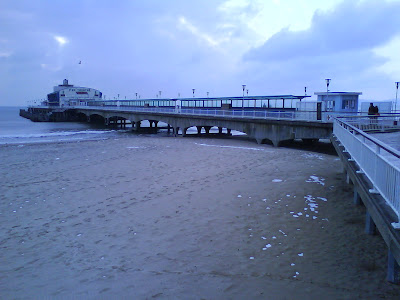 A southern sun attempts to pierce its way through Bournemouth pier, while the beach doesnt quite dry up the previous night’s fall of snow. 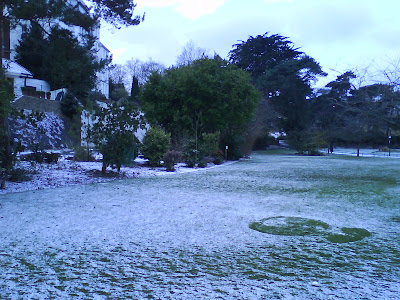 Bournemouth seafront gardens. Also called Bournemouth summer gardens. A bit odd to call it that in the photo above. Again, not a soul in sight! It was a pleasant lonely walk. 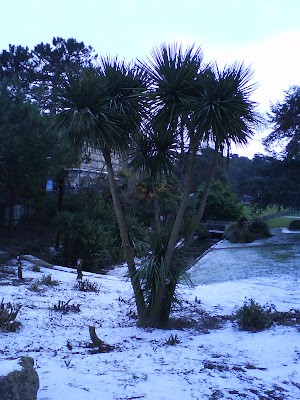 A tree at Bournemouth seafront gardens. 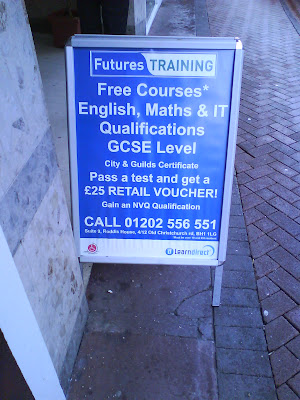 I wasn’t looking for any courses, but just odd that I took this photo that day (I’ve included all the photos on this post) given that I’m now teaching English. I think my former girlfriend Noemi wanted to study English there. 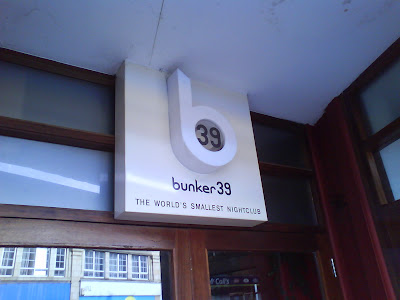 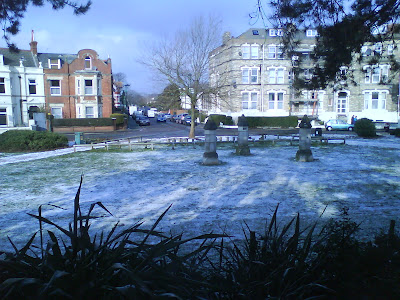 Boscombe in the snow. Boscombe is the district where AFC Bournemouth play their home matches. We lived at Arnewood Road in Southbourne at the time. 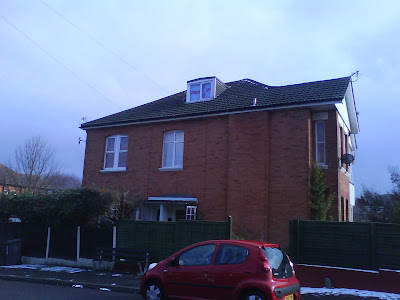 If you look closely, you will see my famous travelling Northern Ireland flag on my bedroom window! This sighting is of course a coincidence, as the main reason for all of these photos was the snow. In that wee house I lived with Dan Darch, Richard Rowland and Corinne Luescher. A mix of Switzerland, Cornwall, England and Northern Ireland. Looking back it was a dream household for us. But things went wrong for a lot of us at the time. I can look back with some fondness and sadness at that flat. 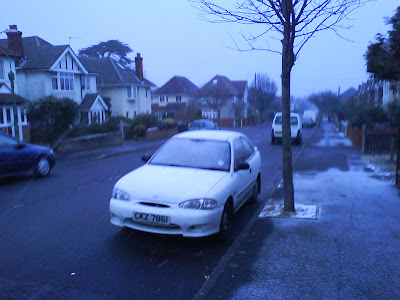 My white Hyundai accent parked outside my old flat in Southbourne. 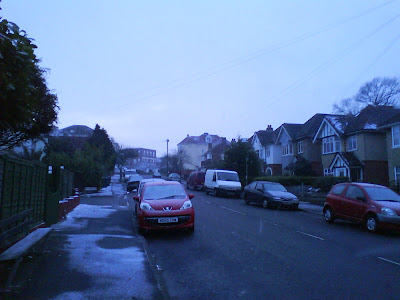 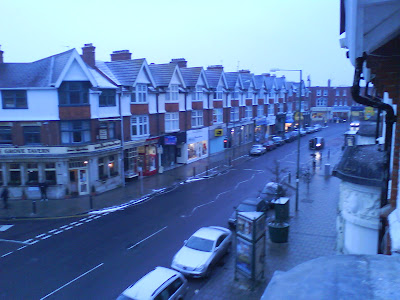 The view of Southbourne High Street in the snow. Things weren’t quite what they seemed. The ex girlfriend lived here and I took this photo from her bedroom window. We lived a 2 minute walk away from each other. 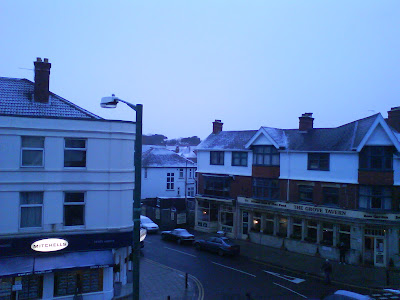 And the view looking the other way of the darkness setting in over Noemi’s flat on Southbourne Grove. 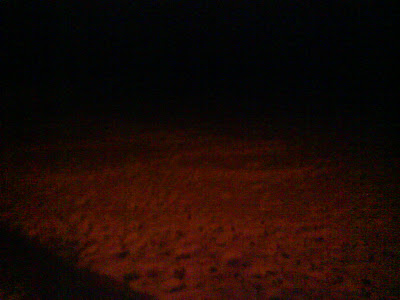 The two of us went for a walk that night and it snowed as we walked along the beach. I took this photo of the beach at Southbourne. 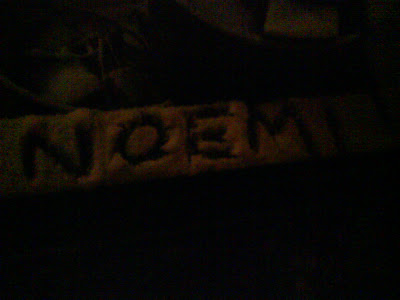 I wrote Noemi Linzenbold ‘s name in snow. We popped into one of the local pubs The Grange Hotel where we sat by the fire and I drank a Caffreys. That beer was memorable for me as I know it was the last pint I had on British soil for 6 months. I got depressed soon after, gave it all up and hid away from the world. 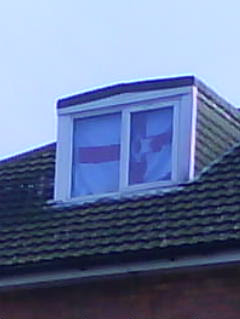 I just took this close up from the other photo. My Northern Ireland flag. Boy has that travelled some distance since I photographed it there in Southbourne. I can see the very same flag, right here in my flat in Hong Kong! 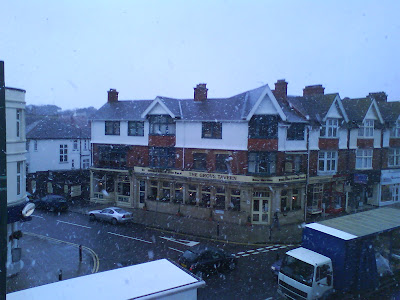 Snow again taken from Noemi’s window the next day. The snow lasted a few days. 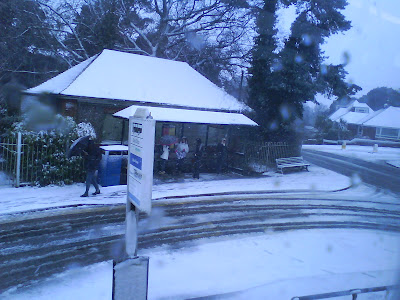 We got a bus to Poole that day for a spot of shopping and I snapped the above shot on route. In the six years of living in Bournemouth, I don’t believe I saw as much snow as this. 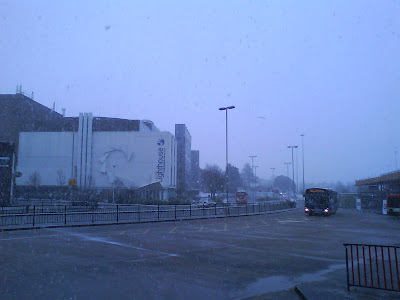 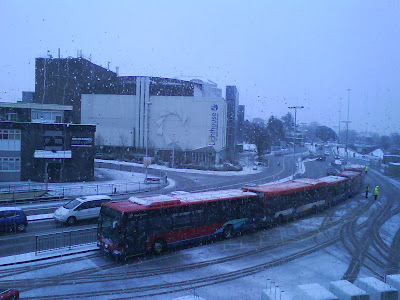 And the last photo. A chain of buses pulling away from Poole station. All of these photos were taken in early February 2009 in either Poole or Bournemouth. They were also taken by my old camera phone, which still worked up until late 2010 (ironically breaking while in Antarctica). Noemi Linzenbold may have enjoyed these moments with me. She should have treasured them. They were locked in the history books and it was time to put them online here. If not to close the doors on that life, but at least to have one last fond memory of winter in Bournemouth. On the grand scheme of things, its not a bad old town. It’s more than just its football team that has left some kind of mark on me for life. I shared my story of my times with Noemi Tipney Linzenbold on this article.
Key Song:
MANIC STREET PREACHERS – NOBODY LOVED YOU (“Winter leaves still make me believe…”):
A few videos, but none of the snow:
GETTING THE 1B BUS FROM SOUTHBOURNE TO BOURNEMOUTH FOR THE LAST TIME IN SEPTEMBER 2009:
WORKING IN BOURNEMOUTH PAVILION THEATRE IN FEBRUARY 2009:
WALKING DOWN THE BATH ROAD TO WORK IN BOURNEMOUTH FOR THE LAST TIME. FAIRLY EMOTIONAL. SIX YEARS OF LIVING YEAR AND THIS WAS THE END IN OCTOBER 2009:

Life is tinged with sadness and emotion and I’m glad I’ve written this report today. It wasn’t easy. I dedicate it to Dan, Corinne and Richard who lived with me at the time.