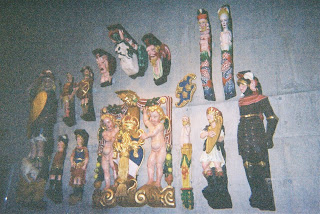 Iceland had been the last trip of my world tour (which ended then mid-September 2007), but all the time I knew I was heading on a pre-booked cheap deal to Stockholm, Sweden in October 2007, so my travelling bandwagon had not quite worked out how to stop and I was soon on a Ryanair flight from London Stansted to Skavsta Stockholm. (The purpose of which was essentially to watch Sweden v Northern Ireland. Following my country’s football fortunes again, and we were inspired to a fantastic 1-1 draw in front of their Yellow army of fans.) 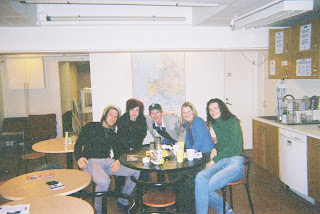 So having spent another month in between in my ‘second home’ of Bournemouth, Dorset, England (having just started a new job in an excellent theatre), I was ready to see somewhere new, my 19th country of the year 2007 would fall to Sweden. That’s the home of Abba, so I managed to avoid Waterloo on route to get some Money. I drove to Stansted from Bournemouth in my Super Trouper with my mate Colin Black. Colin is also a fellow Northern Ireland fan and there were many of us on the flight. This included good mates Gavin McClelland (who I have known since I was 5), Dave King, Andrew Webb and Colin Bowles, all who stayed in the same hostel as me. The first night I ended up in a bar with north of England based Norn Iron fans including Leatherman (Paul Foley), Nolers, John Hart and Owen Millar.

Either side of the match though, there was Swedish culture and people to see. The bus tour of Stockholm I found to be extremely informative and very relaxed. This cost around 250 Swedish Kroner if I remember correctly. This is about 20 quid. Average for a city bus tour, I had reckoned. These city bus tours I had previously done in Los Angeles, Berlin, Moscow and Dublin amongst others. Stockholm’s population is just under 2 million, it is the largest city in Sweden and is located on various islands around Lake Malaren (one of the biggest ones in the Baltic area). The city actually is based on something like 14 islands, though I’m not sure how many of these I was on (possibly just three, at Solna; where our hostel was; and one containing the Palace of the Royal Family). I may well have heard this totally wrong during the tour (strangely for once I wasn’t taking notes) but Stockholm means something like ‘the floating log on an island’. Even if I heard wrong, I like the idea.

The Old Town features many steep hills, old cobbled streets and untouched architecture. It is bizarrely quiet after 9 pm at night, with not many bars or even restaurants in the area where people live. The Swedish have a strong work ethic and in almost conservative lights out approach, work in the week and party the weekend. This aspect I could only grasp from what I saw and also the meeting of Swedish Alex in Bournemouth. It’s my take on it and I stick with it. 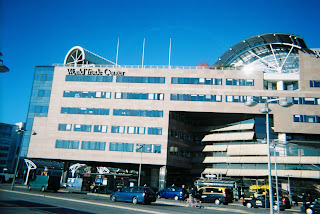 Stockholm is a superb centre for boating. One in ten people own a boat (the variety of boats was clear to see from staring at the lake), which shows the richness as well. Of course we have heard of the terrorist threat to Sweden’s World Trade Centre not just in the aftermath of 9/11 attacks. Oh I saw the World Trade Centre as well. A lot of big business in this country. It’s even the home of IKEA, a world leading furniture manufacturer. The richness can also be clear to see on the city’s shopping streets. Expensive gifts, clothes, even beggars wear shoes and socks. There was something bizarre about Stockholm. Possibly more bizarre than some of those places I’d seen on my tour. And who would have found anywhere more bizarre than a shop which bans bags (in Moscow), a city seemingly smaller than Groomsport (Rotorua), a bar with 3 different tariffs (for the same drink) (in Prague), a village with no postcards (Osterweddingen) and a Belarussian lady (called Taisa) who took 5 hours of her day to help me find a hotel in Bobruisk? Anyways… 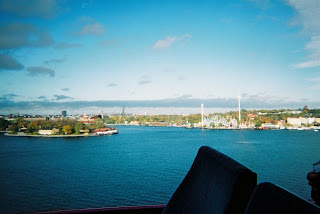 The history in Stockholm is one you need to read up on, and my brain wants to know more. Carl Gustav the Sixteenth is the current monarch, and as you’d imagine The Royal Family is a proud and patriotic part of Sweden’s history. I found out on the tour that their Government set up is similar to ours in the UK. They have the right to democratic vote to elect every four years the Prime Minister is the head of the leading party then they also have the King. They also still proudly have their own banknotes so its similarities to the UK are there. The flag is flown quite a lot as well, which displays a sense of nationalism and separatism from places like Norway, Denmark and Finland. Don’t confuse a Swede with a Norwegian. 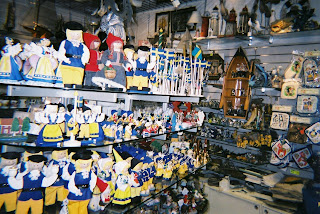 I decided to go to the famous Vasa Museum. The reason was, I had heard that Gustav Vasa was the first King/Ruler in Sweden and had planned to have the finest boat for him and his merry men. However the boat sank on its maiden voyage and is remembered in a specially-built Museum by the water. This story not dissimilar to that of the Titanic (Made in Belfast), though perhaps nature sank the Titanic and bad planning sank the Vasa. Either way I enjoyed the Museum. A fantastic ancient boat, pieced together and rebuilt to a close resemblance of the original the museum offers a trip into early Swedish history. It all started here in Stockholm back in 1628 when the boat keeled over. Years on it was carefully rebuilt with polyethylene glycol (I’m no scientist). I’d recommend seeing that. Camera was broke by then, but I had took many photos anyway. The visit also re-jogged memories of the sinking of The Herald of Free Enterprise in March 1987 off the coast of Zeebrugge, something which will be covered in another blog post.

I didn’t mention alcohol or nightlife, of course I did this as well both nights, though with the football crowd. My highlight was singing Common People on kareoke in a bar called Kicki’s which I enjoyed on the first night. The cool Swedish beer is worth trying. Norrlands Guld is the brand I put my faith in. Go with that. The clubs stay open till around 3 am, so similarities with the UK are there again.

There’s loads more to see and do – boat tours, many museums, architecture, woodlands and music. Stockholm the city worth a visit. Also even the long journey from Skavsta airport to central Stockholm is excellent. Those are the things I love about travelling. Someone else drives you through somewhere beautiful. 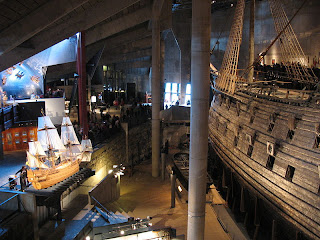 Of course as you’ll learn as you traipse through my stories from travelling, I sample only a bit of each culture and place I visit. It’s a bloody short life, I’d rather have one sip of every beer than every sip of one beer. Variety, diversity and eclecticism are the spices of life. So this is my take on a little log on a little island in little Scandinavia. Some people call it Stockholm.

As Sweden’s Ace of Base so eloquently put it back in 1995 “It’s a beautiful life.” They weren’t fucking wrong were they? Enjoy it and more importantly be an integral part of it.

Favourite Thing About Stockholm – Friendliness of the people.

Moving Moment – Seeing a ship which sank almost 400 years ago.

FACT – The Vasa Museum (Vasamuseet) is a maritime museum in Stockholm, Sweden. Located on the island of Djurgården, the museum displays the only almost fully intact 17th century ship that has ever been salvaged, the 64-gun warship Vasa that sank on her maiden voyage in 1628. The Vasa Museum opened in 1990 and, according to claims on the official web site, is the most visited museum in Scandinavia.