“The telex writers clattered where the gunships once had been” – Donald Walker. 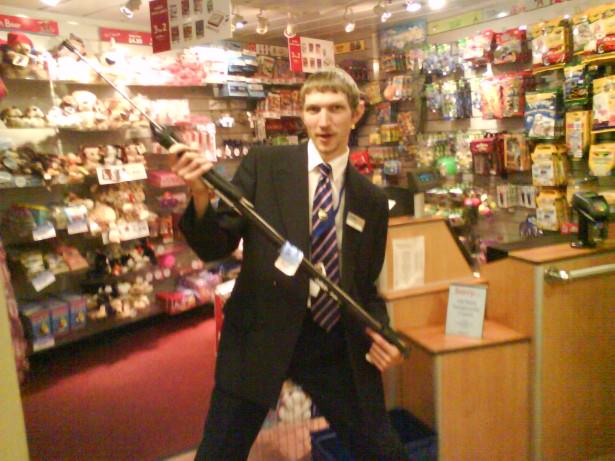 The Day I…smuggled a spear gun into Guernsey. Odd, but true…

In my series of “The Day I…”, I detail random stories from my decade of nomadery. I spent two summers working on ferries (Isle of Wight, Lymington, Poole, Weymouth, Cherbourg, St. Malo, Guernsey, Jersey) and those jobs threw up some very amusing stories. So, one day I…smuggled a spear gun into Guernsey. As you do, but it wasn’t quite as simple or even as dangerous as that, possibly. 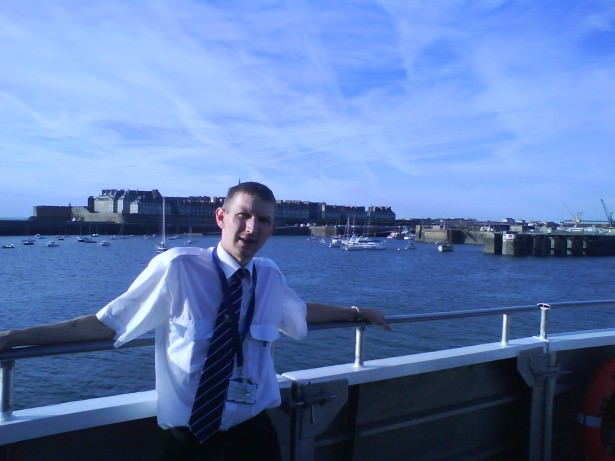 It was meant to be just a normal day on the cross channel ferries – the joys of being paid to travel!

As I start my shift, loads of my colleagues are absent that day. I normally worked on the front till in the cafe with Chris Bilsland. We called it the comedy cafe to Cherbourg (or something like that) but this day, I arrived in work and noticed I had been put down as working on the Gangway. This also involved working in the onboard shop, and physically visiting France and Guernsey (i.e. getting off the boat – a lot of the journeys in the restaurant and cafe meant when we docked, we had just about enough time for a cup of the Earl and a bit of vacuuming before heading back to Poole in England (where I lived at the time). 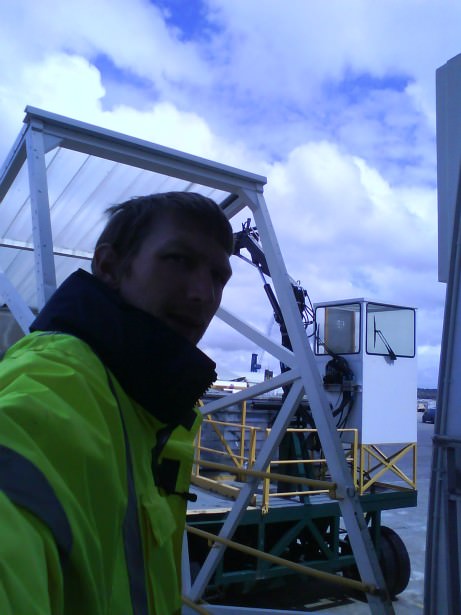 So I got my high visibility yellow jacket on and I went with my clipboard, pen and walkie talkie onto the Gangway. Basically this is a “piss easy job” – a monkey could do it, except a monkey wouldn’t stand there it would jump around! 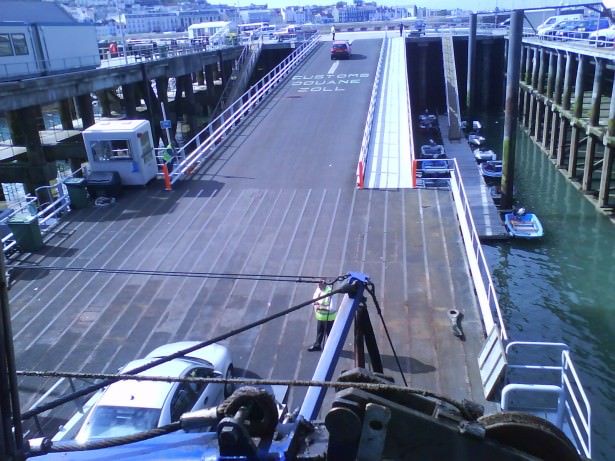 Decent view from my “work window” don’t you think – and I also had a similar view in three countries in one day (if you class Guernsey/Channel Islands as a “country” of course!)

So the gangway was for foot passengers only and it was my job to also follow them off the boat in both Guernsey and France. To be honest the whole time was a bit of a blur now and I’m writing this from memory, but the job was a simple one. And you know what? I didn’t even have to check if the customer’s had a ticket or not!! That was already done at the harbour. But anyone who works beyond the ticket search point could easily just walk up the gangway and get a free trip to France! 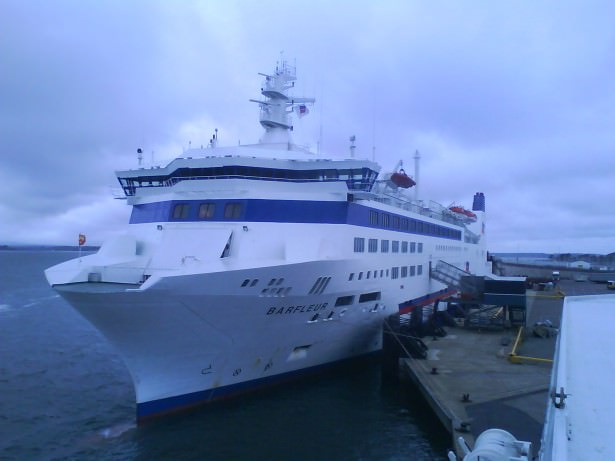 So customers start coming up the ramp and then a security guy calls me down to give me an “item”. It’s a spear gun. It’s heading for Guernsey and requires police clearance. But since I’m on Gangway Patrol for the day, I have to take it personally to Guernsey as it is banned on board and the customer cannot have it on his person. It’s a spear gun!! For killing fish and I’m standing there manning the gangway holding up a spear gun at customers in a Northern Irish accent. One guy yells till me “We’re not on a boat to Belfast are we?”. No, we weren’t but I was loving the thrill of it all. And yes, it’s only a spear gun, but it was amusing. 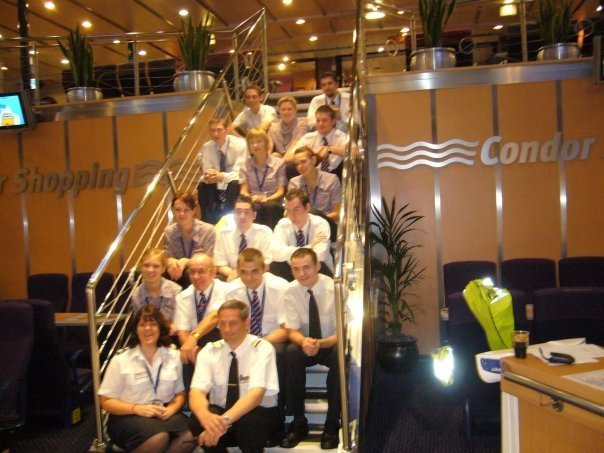 With my crew on the ferry in the summer of 2009 the day I smuggled a spear gun into Guernsey!

I held a spear gun like some kind of drug dealer. It’s not even that dangerous a weapon (Ok well you know what I mean…), but company policy say customers cannot take it on board and it needed to be transported to Guernsey with the help of the gangway member for the day. I had two options, either carry a spear gun for my entire shift and keep my eyes on it or hand it into the captain of the ship on the bridge until we docked in Guernsey. As tempting as it was to man a spear gun for my entire shift, I also had to stack some shelves in the onboard shop and serve customers. This meant there was no way I could keep my eyes constantly on the spear gun, so bridge it was. I had a bit of a play with it with my fellow members of staff, and even had to wrap tape round it so that it physically couldn’t be used. 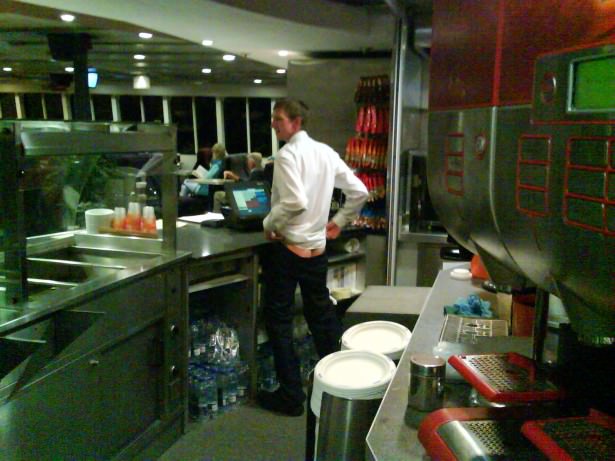 Smuggling a Spear Gun into Guernsey and pulling mooners – it was great “craic” working on the cross channel ferries ;-

The captain added the Spear Gun incident to the ship’s journey notes. “Jonny Blair, the travelling Northern Irishman shall be responsible for maintainence and safeguarding of the Spear Gun for ‘Customer G’ until arrival at St. Peter Port Guernsey, where the gun will be handed over to customs for checking and handing back to its owner”. 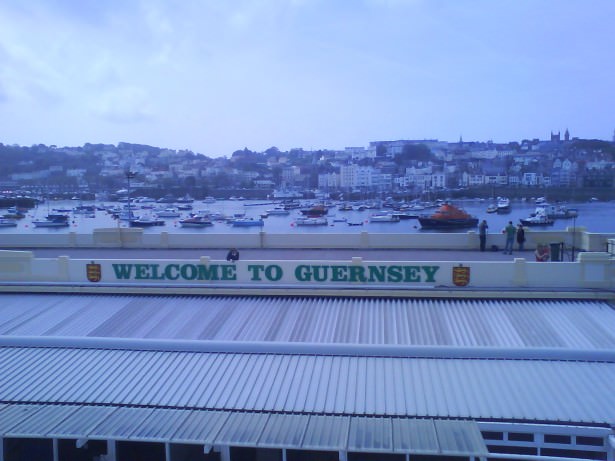 We arrived safe and well in Guernsey complete with a dangerous weapon – a spear gun!

Without further ado, I got on with my job and we docked in Guernsey. I grabbed the Spear Gun in James Bond style from the bridge, before brandishing it to usher the foot passengers off the ferry. An American tourist started taking photos of me posing with it. I then headed to the customs office in Guernsey for peeler clearance before handing over the spear gun to its rightful owner, a keen under water fisherman perhaps. I had done my job and smuggled the spear gun successfully into Guernsey. I later ushered more passengers off and carried a suspicious box to the customs office at St. Malo. I checked passports at Guernsey on our way back. It was normally a round trip with two stops in Guernsey and the day I smuggled a spear gun into Guernsey ended up being the only time any of our crew saw a spear gun that summer. By the way, spear guns are not entirely legal and it would appear that I almost broke the law that day, when I was merely doing my job. On with the show my friends…

A video of me working on board the boats to Guernsey and “proper caining it mate”:

Pre-sunrise at Poole Harbour while working:

Don’t Stop Living is absolutely condemned to a lifestyle of travel! You can also read about the day I got naked in Antarctica!!