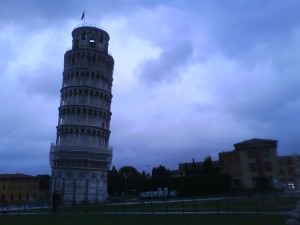 Visiting the Leaning Tower of Pisa in Italy.

It’s sometimes a cliché in life to “tick off the major sights” but like a lot of other travellers, I do them too. It would also seem a bit ludicrous to end up in Pisa in Italy, without actually visiting the Leaning Tower of Pisa. I was there, 4 years ago to the day, what’s it all about?

Where is the Leaning Tower of Pisa?

It’s in the city of Pisa, Tuscany in Italy. It’s not tall enough to be seen from anywhere in Pisa, but it’s also not too difficult to find, you’ll be glad to know. Unless you’re already nearby, it’s best reached by air. On my trip, I flew into Pisa airport (Galileo International Airport) by booking flights through city breaks as I lived in the UK at the time. I flew from London. To get to the city centre from the airport is fairly easy – hop on a Red LAM line bus and it will actually drop you off close to the Leaning Tower itself. 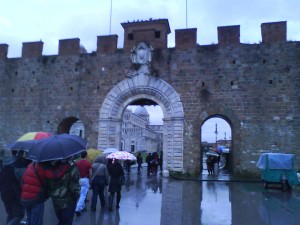 Getting to Pisa city centre from the airport is fast and straight forward – you will arrive near this walled entrance.

Pisa airport is remarkably close to the city centre, so taxi and even walking are an option, but stick with the bus. In fact, the Leaning Tower was the first thing I actually saw while walking round central Pisa! However, you need to know how a visit there works…

Where to stay in Pisa?

I travelled with 5 other travel buddies at the time and we booked two rooms at the Villa Leaning Tower. This is a large house turned into a cheap Guesthouse and it’s recommended. Not just because I stayed there, but because of its proximity to the Leaning Tower, which let’s be honest here, is the reason most globetrotters and holiday makers head to Pisa (Believe it or not, I didn’t visit Pisa for the Leaning Tower, I was actually there on a football trip! But I had to see the Leaning Tower when I was there) 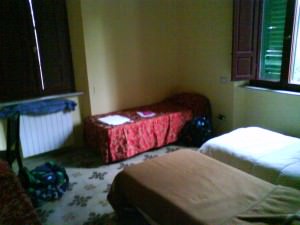 Visiting the Leaning Tower of Pisa itself

Visiting the Leaning Tower of Pisa couldn’t be easier. Get to the main square where the tower sits, walk in through the entrance to the tower, pay your fee and head to the top for a tilted view! It’s that simple. Though there are a few things I noted in my travel diary that day:

It was totally NOT busy at all when I went (February 2009) so don’t be rushing to get up early and queue for it – you will be surprised that the entire sensation is done and dusted in less than an hour (honestly that’s all the time you need). Unless of course you go in peak season (Summer) in which case there may be longer queues. 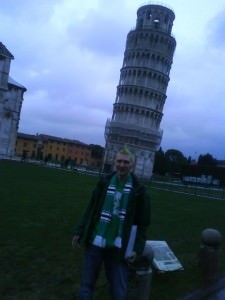 Standing in front of the Leaning Tower of Pisa in the queue to go up. OH WAIT! It wasn’t busy and there was no queue!

You will be searched on the way in and things will be confiscated for taking up to the top. I was there with my travelling football mates and we smuggled a Northern Ireland flag to the top! Then some Italian Police Dude tried to ban us from flying it! 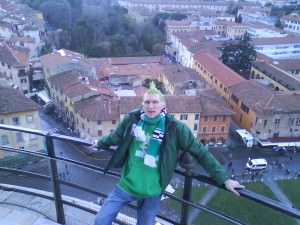 Enjoying the view from the excellent Leaning Tower of Pisa in Italy. Yes I had a green mohawk and was on a football trip with the lads!

How much does it cost to go to the top of the Leaning Tower of Pisa?

Good question, and since I went in 2009, my answer is out of date. I paid 5 Euros for the privilege and the entire event involved walking about about 300 steps, ringing a bell at the top, enjoying the view and walking back down. It’s taking me longer to write this post than the amount of time I spent inside the Leaning Tower of Pisa!!! 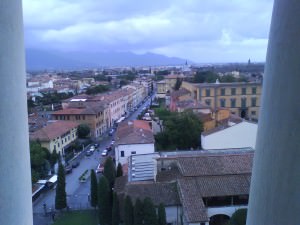 The view from the top of the Leaning Tower of Pisa – I paid 5 Euros a few years back apparently it’s now 18 Euros! Ouch!

The cost for you will apparently have gone up to 18 Euros!! I got this information from Tripadvisor on this link: Price of Leaning Tower Climb. This website seems to think you are better to buy a ticket in advance and that the tower gets busy: Weekend in Pisa but that’s not great advice to be honest – you can literally just turn up and buy your tickets and then walk straight up, you’ll also save money doing it this way!! 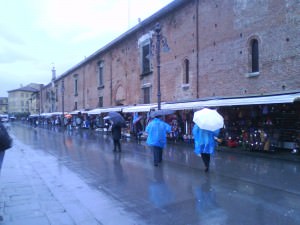 The less than glamorous walk up to the Leaning Tower of Pisa.

If they have changed the policy let me know, but I went there in 2009 and a friend went there last year and this was still the case. However I will tell you this: If the price really is 18 Euros and I had the chance to do it again, I wouldn’t go to the top – it’s just not worth that amount of money, in fact you can get a decent view of the city from a Church or a Hotel, you’re really only paying it to “say you’ve done it”. I don’t normally say “don’t do this” on my travel site, but this is expensive. That said, it’s a world famous monument and you won’t be here again 😉 If you’re not sure whether to pay that amount or not, my videos below give an idea of what it’s like. 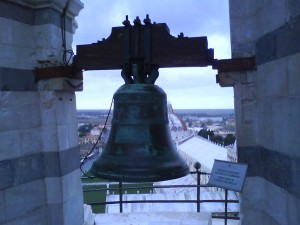 Is it worth paying 18 Euros to ring a bell and look down on a non-descript city??

Why is the Leaning Tower of Pisa tilted?

It wasn’t meant to be that way you know! I learnt that a mistake during construction led to the slight tilt. The architects and builders noticed this as they were building it, but in true Italian style they just got on with the show without regret. The story is recounted on a video on the ground floor entrance to the tower itself and you can pick up a leaflet or guidebook if you need one. There have been attempts to rectify the tilt, but the city relies on it these days for tourism, so it’s worth promoting the tilt! 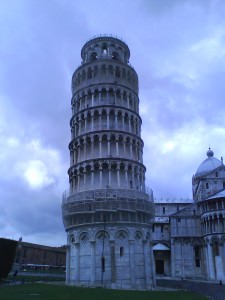 It was tilted by mistake – in fact if you take a photo from the back you may not even notice the tilt.

Some Quirky Facts about the Leaning Tower of Pisa 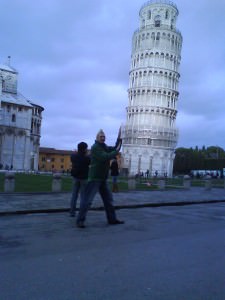 – It resembles a wedding cake

– It is also known as The Bell Tower, the Campanile and La Torre de Pisa

What else is there to do in Pisa?

Visiting the Leaning Tower of Pisa is good, but it’s not the only thing to do. Pisa is actually quite a dull, dreary city but still it has some charm of course and the avid traveller can find joys anywhere, here’s four other things I did to give you a few tips.

The square around the Leaning Tower of Pisa is basically where it’s at tourist wise in the city. I didn’t bother going inside any of the other monuments there due to the price of the Leaning Tower but it makes for some great photography and enjoyable strolls. Head two streets away and rubbish lines the gutters and cracked, unpainted walls give you the impression the place is a warzone (a bit harsh maybe but my take on it!) 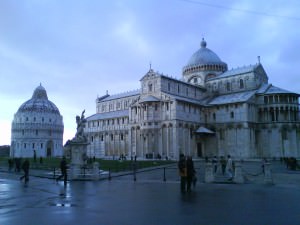 Piazza Del Duomo – Cathedral Square is worth a walk around

OK so football isn’t everyone’s cup of tea I admit, but the stadium is very close to the Leaning Tower and you can literally just wander on inside like we did!! It’s worth a look, this is a surprisingly large stadium for a small city. 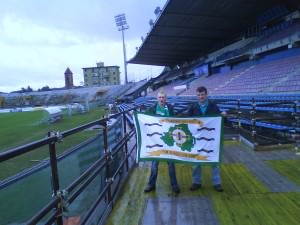 In Pisa you can pop inside the local football stadium for a look around, like myself and my travel buddy Graham did!

Italy were World Cup winners as recently as 2006 and have also played international matches in this stadium in the last few years. The club team that plays there is called AC Pisa 1909, and Henrik Larson, Dunga and Diego Simeone have all played there!:

Come on – you’re in Italy and Pisa does Pizza well – there are countless restaurants to try that authentic Italian Pizza, some with an excellent views overlooking the square or the river. Also if I’m being honest, there’s not a great deal to actually do aside from the Leaning Tower, so eating and drinking are fab traveller’s alternatives! I ate at Bar Duomo (by the square) and Bazeel (by the river). 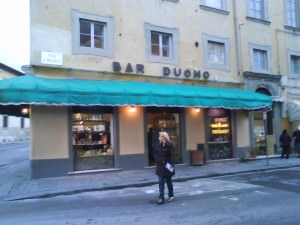 When all else fails as a traveller, get yourself a few beers and party! Pisa brings together a mix of locals, students, families and tourists. I enjoyed a great night out drinking there in the bars by the river. Bazeel is a decent bar as is the Irish Pub called Temple Bar, I was even pouring pints and drinking them behind the bar in Temple Bar just “because you’re Irish”. 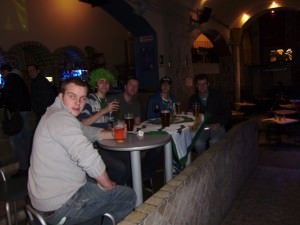 Partying with the lads in Pisa – decent for a night out, when all else fails…

There’s also a museum: Pisa Museum but I didn’t go and you can also walk round the pretty streets in the old quarter, in fact there are a lot of decent churches, old buildings and walls. It’s actually worth spending a day and a night there, but I’d say that’s enough…

Well that’s actually it. The Leaning Tower of Pisa and a bit more for you on Don’t Stop Living – a lifestyle of travel.

Walking up the Leaning Tower of Pisa:

Top of the Leaning Tower of Pisa:

A night out in Pisa:

13 thoughts on “Visiting The Leaning Tower of Pisa, Tuscany, Italy”