I’d watched Big Brother since series 1 in the year 2000 (wasn’t it strange that we were all fully grown?). I even applied to be on it, sending in a video of me cutting meat in Steenson’s butchery (I’m going to have to find that video sometime and fire it up!). I also appeared in a local nightclub version of Big Brother in Bangor Northern Ireland. Then in late 2003, finding myself culture hungry and enjoying a totally new life in Bournemouth, Dorset another opportunity for fame arose. I wanted to grasp it with both hands and enjoy it! 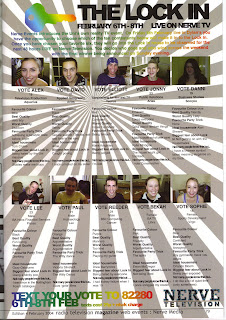 It was advertised around Bournemouth University that there would be auditions one night for ‘The Lock In’, an equivalent to Big Brother being held in the University. Naturally I had to audition, be successful and hopefully win it. That was the plan. I turned up in D2 bar one night in December 2003, where around 70 – 80 people had turned up to audition for a place in the ‘house.’ I was asked a few questions, did alright and got chosen in the last 24. I was pretty happy, I was then invited to an all day session in The Commodore Hotel in Southbourne while the judges decided who would entre the ‘house.’ We were whisked away in the University minibus to Southbourne for a day of fun overlooking the beach. And fun it was, from seeing the size of Sarah and Sophie’s breasts (albeit from the outside) to meeting Nottingham Forest’s only punk, we had a great day. I added the spice of Belfast to some dour English people’s lives, and this group of 24 would be whittled down to 12 by the day’s end. I simply had to be one of the 12. By the end of the day, we were all sat round a table and in twos, there was one who made it and one who didn’t. It was either me or Tom, and thankfully I had done enough to get into the final 10. Then we would be screened on University TV and in the Nightclub over the next few weeks before the voting would start. 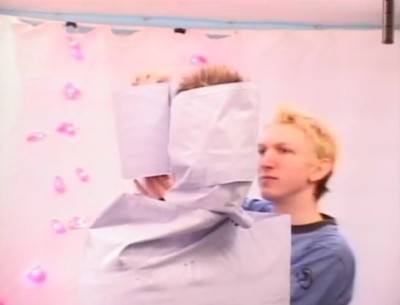 I enlisted upon my good mate Dancing Andy as my Campaign Manager, then the fun would commence. There were only going to be SIX places in the Lock In House, out of the ten of us, it was done by text vote. I did a few things as part of my campaign. Firstly me, Steve and Andy made hundreds of VOTE JONNY Posters, each had a different slogan on them. We plastered these all over the university, especially in the girls toilets. At which point my friend Rebecca said, “Jonny this is fucking ridiculous, I cannot even take a piss without seeing your face!” That’s what I wanted. 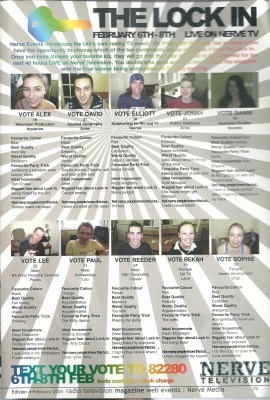 I also did a lot of promotion on Nerve Radio (both my normal show and on FM). I also did a speech in Dylan’s Bar (twice) in front of loads of people telling them why I should be in there. I added a mix of politics and randomness. Then Andy and I dressed in suits and stood outside the students union handing out leaflets on VOTE JONNY. We also wore ‘VOTE JONNY’ T-Shirts which said ‘Which came first? The bacon or the egg’. Even if nobody got the jokes, we were laughing! It was so Alan Partridge that Jurassic Park has ever since been my catchphrase. Classic. Smell my cheese you mother! Then on the Friday night when the votes were counted and we would go into the house, I turned up with my mates in Dylans Bar at Bournemouth University to try and get into the house! We played games in the bar, I got pissed up and soon we were up on stage (all 12 of us, awaiting the vote!). I was getting nervous that I wouldn’t be selected, as Danni (who replaced Laura), Sophie, Paul and Lee had all already left and entered the house. I was left with Rebekah, Alex, Dave, Elliott, Reeder and me! I totally expected Reeder to get into the house. But I obviously had more contacts and more balls than I thought as I was called next! I was ecstatic. 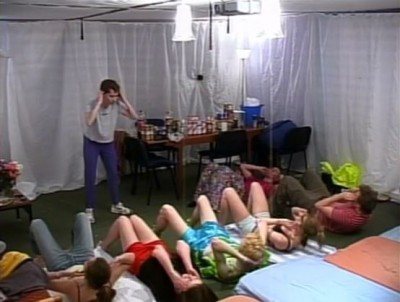 I said a quick goodbye to my mates (about 10 had turned up that night) before the extremely hot Natalie Johnson (who I would spookily meet again later while doing PR for Apple…) whisked me up a lift to the Student Union Centre and into the Custom Built House, which would be my home for the next 3 days! This was THE LOCK IN! 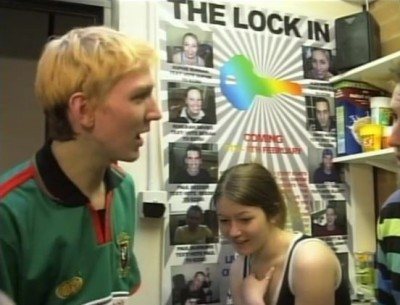 This is part one of the Lock In stories and I had planned 3 or 4 parts to it, but instead I’ll be publishing them in my upcoming book, Backpacking Centurion but for further reading check out my mini second part to the Lock In story and of course the crazy aftermath Nicky Barmby Army story.

2 thoughts on “The Lock In Part One: Auditions, Voting and The Big Night!”