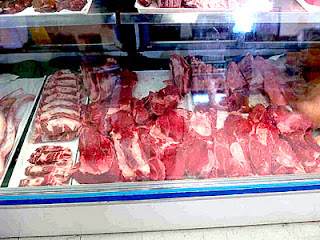 The Silence of the Lambs

“I am an architect, they call me a butcher” – Nicky Wire.

If I ever owned a butcher’s shop, I’d call it ‘The Silence of The Lambs’. Literally thats what it is, and plus I love that sort of comedy. If you don’t get it you need to catch yerself on for fuck’s sake. My comedy grew in times of working behind the meat counter at Steenson’s (Local shap and butchery) in Ballyholme, Bangor. I started working there full-time in April 2002. It was just after I had left the Halifax bank as a savings sales assistant at the Gasworks site in Ormeau Road, Belfast. I needed a new job and time spent temping in AMA and MM Group were short-lived. I’m sure I only did about five shifts in both places during April or even May 2002. Then I walked in to Steenson’s and got a job I never thought I’d ever do. You know in life sometimes you do these things? I’m pretty bloody glad I took the job!

So since day one working in Steenson’s (such a local shap for local people) I set about enjoying my work and hoping to put some comedy into other people’s lives. That was important, as was a personality to have this job. After about a week I wanted to leave!! I think looking back everyone hated me. I’d never had that before. At the time I was always out on the piss and soon wised up when I realised there was beauty in my new job. But I didn’t leave, cos I knew in the long run the people would be great. I worked with Dickie the head butcher, Chris his assistant and with the ladies Tracey, Jannine, June and Julie. It meant we looked after all the counter stuff in the shap. This included all butchery, cooked meat and the cheese. It was much greater crack than I could have imagined. They left as much a lasting impresiion on me as I did them. Well I hope. St least not for wanting of me wanting to. 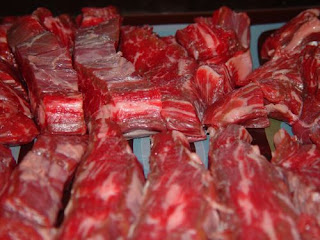 Mornings would be quiet affairs, dressing up the butchery window for the day. We would have a large selection ranging from “the finest pork and leek sausages in town” to “t-bone steaks” to lamb loin chops cleavered to perfection by my good self (kind of). As a cheese lover I also had the delight of arranging the cheese cabinet and ordering for a while. I love a bit of cheese. Wensleydale with Apricots, Mexicana and just plain Coleraine Cheddar! Skills didn’t just involve chopping meats and doing mince steak. We also cooked chickens and sausages every day, made our our ‘home cooked ham’ (done in the boiler and gorgeous!). And then mine and Tracey’s favourite was making salads. For someone who is very useless at cooking, I must say I can peel potatoes, cook rice and mix my own salads to perfection and to customer satisfaction. MInd you I usually took the meat side, while Tracey, Jannine, June and Julie did the salads. 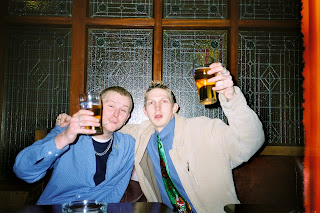 There were many laughs and practical jokes. The Christmas Turkey orders were best times! The time Chris had to ride down to Iceland and buy a frozen turkey on Christmas Eve! The time Dickie and Chris told me that a lamb’s kidney was a testicle and I wrote a big sign in the window to advertise the testicles. I fell for that one hook line sinker and pint of beer. The time me and Chris did penis shapes with sausages. Just the stupid comedy. Customer: “have you got any ribs?” Me (beating my rib cage): Aye. What’s your biggest sausage? (for the record I never got my willy out in work).

The people of Ballyholme have a reputation for being posh and stuck up. Nothing could be further from the truth!! There were some great people there and regular customers. I grew fond of them. One lady even looked like the Queen. I treated her like she was, the time I told her I saw her on the back of a fiver, she thought I was insane. We also got some local celebrity customers:

We had a few good nights out, including my final one in the Odyssey. I finally left Steenson’s just to move to Bournemouth in September 2003. It was a case of there one day, gone the next. And times move on. It’s no longer Steenson’s. Trevor Steenson’s little local shap is now the Co-op and there is still a butcher section, but the butcher’s across the road is now the non-commercial one. Well here’s to some happy times being almost a butcher. I could have moved into that profession you know, I even stuffed pork fillets and boned dead pigs.

KEY SONG – The Corrs – Thunder Only Happens When It’s Raining (remember fondly this song always being on in the shap, though we often also had Cool FM Radio on.) “what you had; and what you lost…”

3 thoughts on “Working Wednesdays: The Silence of The Lambs…Life As a Butcher”