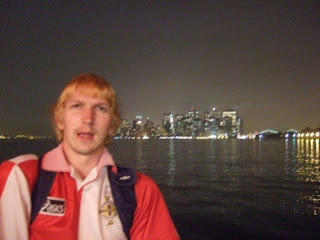 Backpacking in the USA: The White Stripes Trip to Staten Island, New York

While staying at Hostelling International at New York City (incidently the largest hostel in the USA), I had put my name down for a few of the hostel’s organised tours. One of these was a weekly Wednesday night free trip and tour of Staten Island. The ferry across was free after 6 pm I think. So I met at the hostel reception at 6.30 pm awaiting to go on the trip, but was told by the trip leader that due to torrential rain and thunderstorms the trip was off!! (This was the first week of July 2007 and the day before the sun was shining and beating and sweat dripped down my bones…) So the trip was off, or was it??

I then spoke to Charlotte, Simon and Zizis in the hostel reception and suggested that we fuck it and go to Staten Island on our own anyway, being our own guides!! Just for a bit of fun! They were up for it. Within 10 minutes or so we had rounded up a group consisting of people from all around the world. We were off on a trip to Staten Island anyway!! There was Stefan from The Netherlands; Charlotte Murray from England; Simon Panossian from Perth, Australia; Taylor Baugh from the USA; Steph and her Mum from Montreal, Canada; Zizis a Greek-Australian and me from Bangor, Northern Ireland!

We waited to see if anyone else was up for it and then off we went…I started the icebreaking by getting everyone’s name and email address and said I’d mail the photos round (ended up putting them on Facebook as you do these days). Then Simon (Australian from Perth) started talking about music and how he had seen the White Stripes recently. Simon’s Aussie accent was so strong that it caused us to wonder what he actually said. We then went round everyone asking them to say ‘White Stripes’ to see how different it was in everyone’s accent. Simon made it sound like ‘What Strops’. From that moment on the trip became known as ‘The White Stripes Trip to Staten Island.’ It’s funny how stories like that happen. They help make life more interesting and trigger the memory. What was also interesting was a few of us kept humming the tune to ‘7 Nation Army’ the White Stripes song. Ironic really as there were 7 nations within our group and in a sense we were an army…We got the New York Subway from 103rd Street near the hostel to South Ferry on the number 1 red line. I don’t think we had to change trains but I could be wrong. We then ran and just about made the free ferry across to Staten Island. The boat was packed and we got our own seats and relaxed for the journey.

I can’t remember how long the ferry took, I reckon about 20 minutes. The view of Manhattan Island was excellent and we could photograph the Statue of Liberty clearly on the way. It was the dreamlike image of just being on a random boat with random people on a quiet Wednesday evening. We took loads of photos to fuel the memory, and then there we were on Staten Island!

A few days earlier I had done the Circle Line boat cruise. From there I could see Staten Island and the Icon Stadium (Icahn Stadium, pictured), where both George Best and Pele had both played. Now I was on the island and it was getting dark, the longest day of light in 2007 had passed New York by and we looked for some food and drink now against a fading Staten Island Sky. The sightseeing element of Staten Island was lost on us, so a bit of team building in a local bar would be in order. On the way Zizis and I tried to watch a baseball match through some railings (see photo) but it was impossible. We passed by an expensive bar and a church, before finding a local bar up a side street, which I am sure was called Applebee’s local. In there we sat down and ordered some local drinks. Charlotte wouldn’t believe I was Northern Irish at first, wondering where my actual birth place was, this was actually the first time I had ever encountered this to my amusement! Charlotte, Simon and I chose the local lager complete with Orange Cordial and Orange Slice. For 6 dollars they didn’t come cheap, but the chat and live TV was free. We also got some nibbles in there, I think it was pretzels and nuts but can’t actually recall… 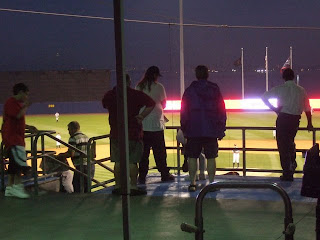 I have fond memories of random chats in that pub. We discussed cultural differences. Simon had us all using Australian colloqialisms by the end of the trip. I read out facts on New York from my diary, Steph spoke in a strong Canadian Montreal accent, but also revealed French was her main language. I was also wearing an old Northern Ireland football shirt that night, hopefully my love for my country is a virtue people will see in me. The barmaid was called Christine and very friendly. She talked away to us and we all signed the guest book as ‘The White Stripes Tour Party’. The bar was pretty empty until we arrived and doubled their bar bill. There was what looked like a regular who came over to talk to us. However he was black and with a Scottish accent just to confuse us all! Then the guy at the bar fell asleep and almost spilled his pint. We had a few laughs on the way, before realising we would miss the last ferry back to Manhattan Island, so off we went again. 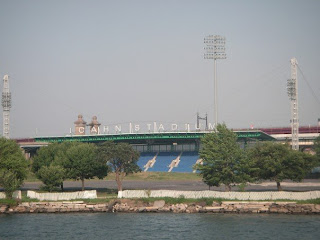 We returned back to the hostel where we all agreed we had had one of those great random nights. That was ‘The White Stripes Trip to Staten Island, July 2007.’ On my entire travels, I do think that it was the most random trip of all, and one that will live with me for days to come. 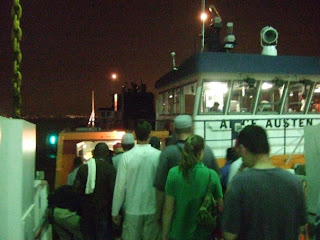 FACT – The Staten Island Ferry is the only direct transportation network from Staten Island to Manhattan, at approximately a 25 minute ride and free of toll. The 55 year old St. George ferry terminal recently underwent a $130 million dollar renovation and now features floor-to-ceiling glass for panoramic views of the harbor and incoming ferries. Staten Island is connected to Brooklyn via the Verrazano-Narrows Bridge using I-278, the Staten Island Expressway. Once in Brooklyn, I-278 becomes the Gowanus Expressway and then the Brooklyn Queens Expressway, providing access to Manhattan through various tunnels and bridges.

1 thought on “Backpacking in the USA: The White Stripes Trip to Staten Island, New York”