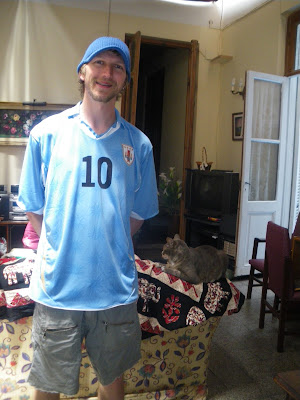 Yet another tale of how life changes and fate changes due to reasons simply beyond your control, with this one a definite influence on the things I did, the people I met and perhaps this flight change was meant to happen for me, as without it I may not have decided to stay to study and live in Uruguay for a few weeks… 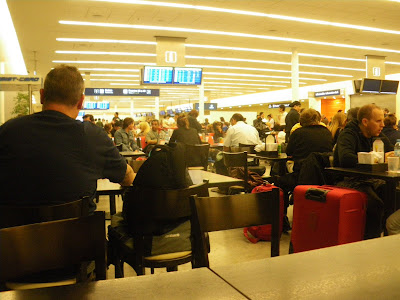 Basically the small airport in Buenos Aires, the Jorge Newberry is closed. They are renovating it and as a result all flights from it were either cancelled or re-scheduled to fly into or out of Ezeiza. This affected THREE of my flights in the end. The first of which meant I missed my free breakfast in the hostel in Buenos Aires, had to pay extra for a Manuel Tienda Leon bus and got no sleep at all on route to Ushuaia. But I made it safe and well from Limehouse Hostel to Ezeiza Airport and boarded my flight to Ushuaia on time. A totally different flight from the one I had booked, just about 5 hours earlier than the previous one and from a totally different airport. 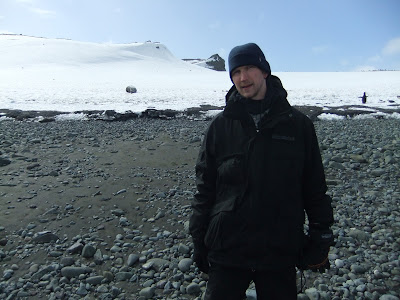 That was that and 2 days later I was almost in Antarctica…then on my return the same problem, i.e. the airport closure was to have an influence once again. 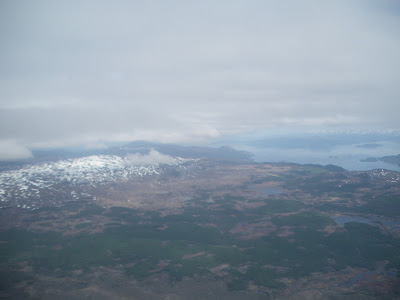 The next two flight changes were causing me considerable more difficulty. Basically with the airport confusion, they scheduled me two flights, one of which they had made it impossible to get!! They had timed by second flight – my conNection to leave BEFORE my first flight. It was ludicrous. 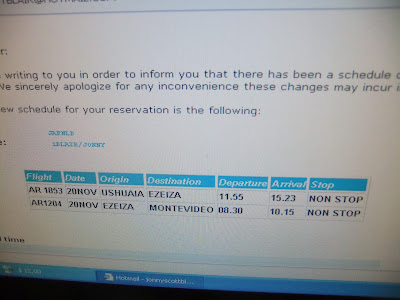 Check out that image, from my email, which I received the day I arrived back from Antarctica, which proves their automated error, the company in question Aerolineas Argentinas – the national carrier for Argentina no less. 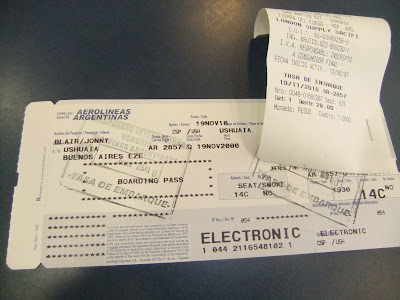 My original flights were: 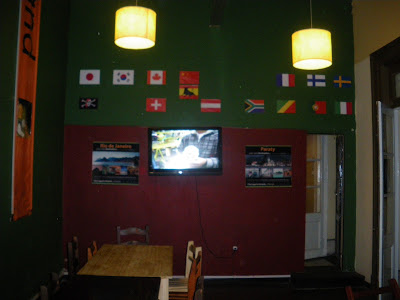 Which was perfect and I booked online myself into the Che Lagarto hostel in central Montevideo for that Saturday night and the Sunday night, to take things from there. However since the Jorge Newberry airport was shut, they had to then put me on flights to the main airport in Buenos Aires (Ezeiza) so they changed my flights for me automatically by e-mail. They booked me on a flight from Ushuaia to Ezeiza at 11.55 am, to arrive in Ezeiza, Buenos Aires at 15.23 pm. Now that to me was absolutely fine as it was. BUT they also scheduled me (on the same email) on a flight to Montevideo BEFORE I had even left Ushuaia. Even if I was superman, this wasn’t possible. The only person who could have boarded those two flights they had scheduled me was Marty McFly. 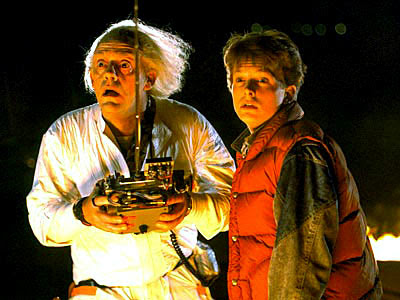 We all know Marty McFly isn’t real and that “Back To The Future” is possibly the most genius title anyone has ever given to a film. 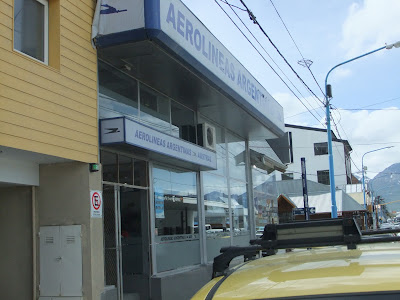 So without being able to speak Spanish, I had no mission to phone the airline company, who hadn’t realised the error, even after two emails from myself. Everyone in the hostel realised the error straight away and found it rather funny. I even found it funny myself. 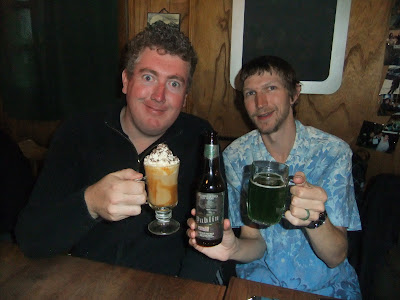 Travelling is never fun when things run too smoothly. So I spent 5 or 6 hours on two separate days (including the day my flight left) in the offices at Aerolineas Argentinas in Ushuaia trying to get these flights sorted and changed. The first day the computers were all broken, at least that was the excuse I was given. On that note, I left the offices and joined the remainder of my Antarctica cruise mates in Ushuaia’s first Irish Pub, the Dublin for a drink. 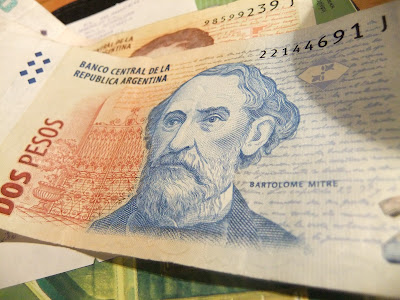 I knew the next morning I would go in there at 9 am and try to sort the flights out. So I joined the queue early morning, was about 50th in the queue – as it was a busy time and suddenly I was up speaking to a lady who spoke no English at all. I could mutter a few words, and I strung them together – manana problema avion along with Buenos Aires and Montevideo were enough to alert her that indeed they had made a big mistake. 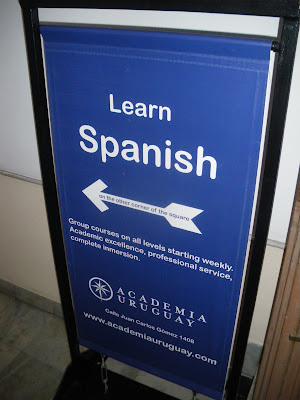 I was also alerted myself there and then that perhaps I should learn Spanish – I still had 7 – 8 weeks left in Spanish speaking countries (minus the Dutchness of Suriname and the Portuguese speaking Brazil). 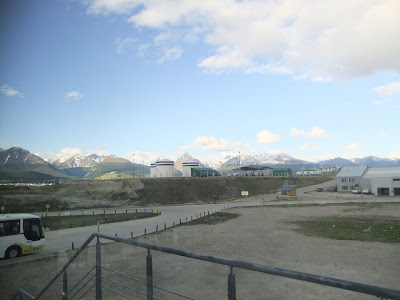 First however the lady sorted my flights out – very quickly and with a minimal of fuss. She asked in Spanish (and a wee bit of English) if I was OK to fly “este noche”, “tonight” to which obviously I was very happy to do. This was my Buenos Aires flight a day early and with this new flight I could easily make my second flight at 8.30 am to Montevideo in Uruguay the following day, so I duly obliged. 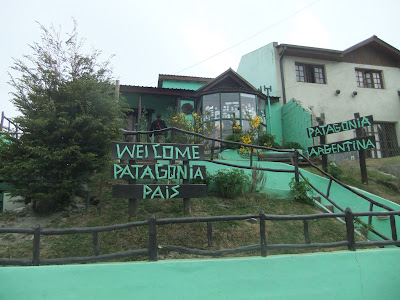 It meant cancelling two things – one a quick drink with Mark and Rodrigo to say goodbye that evening – the two of them and me would be the last from our cruise still in Ushuaia. I also got to cancel my night in the hostel at the swanky Patagonia Pais, in exchange for a much cheaper and more exciting night in Buenos Aires airport. 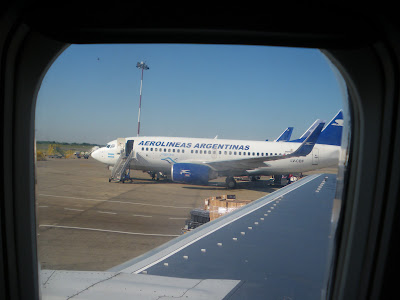 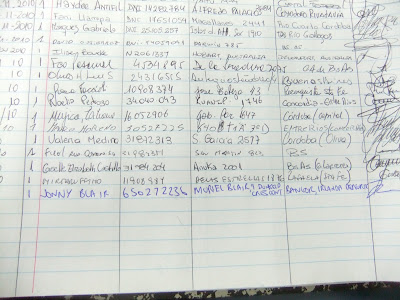 So I quickly had to post a package back to family in Northern Ireland (books, clothes etc from Antarctica – I was carrying too much stuff), pop back to the hostel, grab my lunch and check out. I also had time to send a message on Facebook to Rodrigo to see if we could meet up as planned but that I was cancelling the idea of Horse Riding (we had wanted to go horse riding that afternoon for $40) and instead maybe we could have a few drinks at a trendy wee pub on the seafront instead before I would jump into a taxi and go to Ushuaia airport for my flight to Buenos Aires. 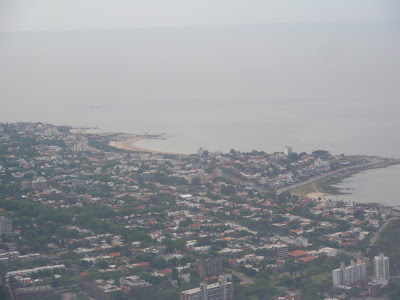 So life changed. I got to Uruguay at 10.15 am, chance led me to meet a new travel buddy for the next 3 days – Wesley Tang from Hong Kong, I also made it to the Penarol match that night, and whilst whiling away the hours at Buenos Aires airport and reading up on some Spanish, I decided maybe I could stay in Uruguay and learn Spanish. 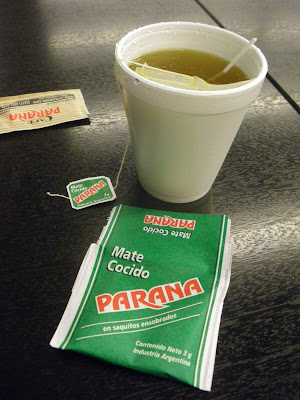 After spending the entire night in Buenos Aires airport drinking Mate and Coffee, I was now ready to embark on a new start – studying Spanish and blending in as a resident in Montevideo.

Who’d have thunk it??
Actually the Gallagher brothers would have, though they undoubtedly got the country wrong. While in 1994, they opted for Columbia, I had gone Uruguay.
In the words of Noel himself, and from the song “Columbia”, it was a case of “there we were, now here we are.”
Cities Visited – Ushuaia, Buenos Aires (been there done that, so I stayed in the airport this time), Montevideo
Airplanes Delayed – None
Airplanes Cancelled – Two
Airports Closed – One
Transport Used – Taxi (no airport buses in Ushuaia!), Aeroplane, Airport Bus (from terminal to plane), Omnibus (from Airport to Montevideo)
Bonus – An extra 8 hours in the city of Buenos Aires if I could have been bothered. No, actually forget the tramps and the bin hokers and the endless lines of people, I’ll just sit in a chair at the airport planning ahead. Plus much better an extra 12 hours in Montevideo. A free nights accomodation – being awake at the airport. And the best bonus of all – a top of the table clash between Penarol and Defensor live in the football stadium that hosted the first ever World Cup match, which if it hadn’t been for the fucked up flights, I would never have gone to.
Key Song –
OASIS – COLUMBIA:

IN AEROLINEAS ARGENTINAS, USHUAIA WAITING TO CHANGE MY FLIGHT, WHILE SOMEWHAT PLEASUREABLY ON COMES OASIS, AND STAND BY ME:

GETTING A TAXI TO USHUAIA AIRPORT:


ARRIVAL IN MONTEVIDEO – GETTING A BUS INTO TOWN: