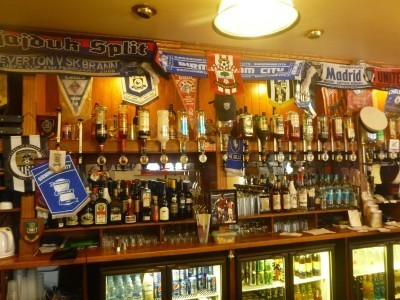 Gibraltar drifts into your travel stories as a welcome surprise. My memories of the place will always be good ones. I wasn’t expecting much from this place to be honest – I’d heard people moan about it, I’d had Spanish friends tell me how silly the place was and I’d even had British mates tell me that it’s full of stuck up ex-Pats dodging tax. None of this garbage was true. Gibraltar deserves a lot more credit. It’s a decent country. 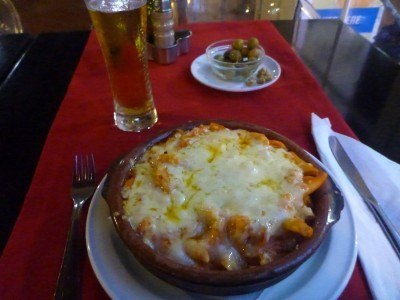 I crossed the border by land from La Linea de la Concepcion in Spain and headed to the cool budget Cannon Hotel. I toured three different parts of Gibraltar and have included bars from each part in this quick top 8.
– Gibraltar’s Capital (yeah what is it?)
– Europa Point
– Top of the Rock 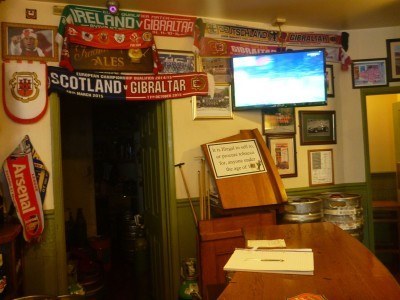 1.The Star Bar
I’m putting The Star Bar first as it’s Gibraltar’s Oldest Pub. It’s actually a small bar and has been done up a bit flashy in the last few years, but for sentimental reasons, neck a beer in the oldest pub in the country. 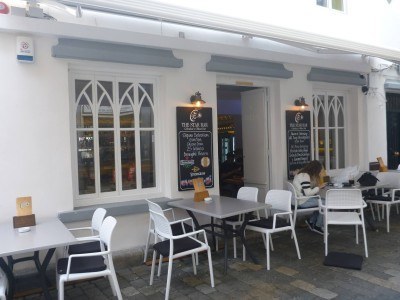 It dates back “several hundred years” and is situated on a side street called Parliament Lane. 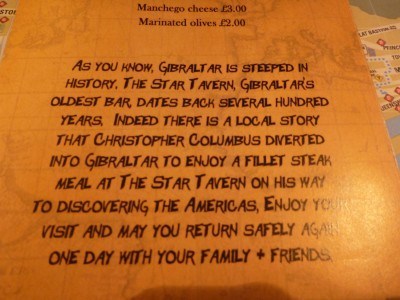 Apparently, there is a local story that Christopher Columbus diverted into Gibraltar to enjoy a fillet steak meal at The Star Tavern on his way to discover the Americas, so that’s a good enough reason to visit whether it’s true or (most likely) not. 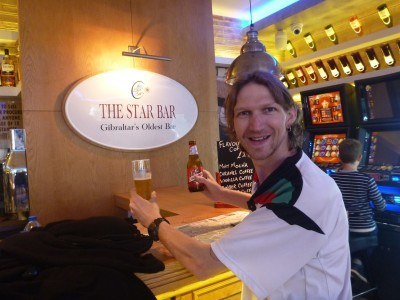 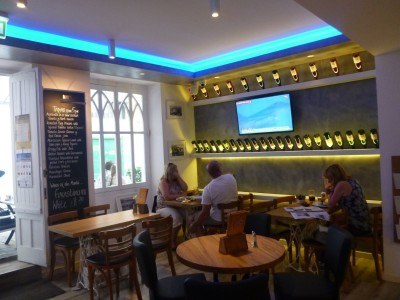 2.The Angry Friar
On a corner on the main street, past the Convent sits the Angry Friar. A pub not dis-similar to those in Central London, but for me the memory here will always be the night that AFC Bournemouth beat Reading 1-0 away. I couldn’t get the match on TV or Webstream so I headed here for a beer and they had WiFi. It was £2.90 for a pint of Caffrey’s. 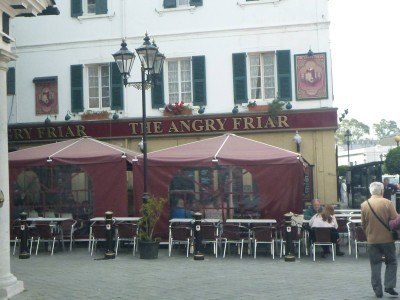 The Angry Friar Pub in Gibraltar

I was WhatsApp-ing my mates hoping we could hang on for the win and we did. The win was vital. Within a week I was back at Dean Court watching the Cherries v. Sheffield Wednesday. Within two weeks we were in the Premier League. I put my football stories on the Ulster Cherry website these days. 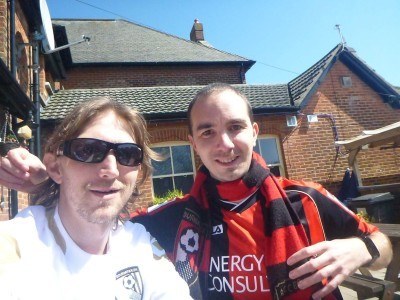 Cherries beat Reading 1-0 and then I flew to England to meet Dan and we were Premier League within a week!

3.The Trafalgar
The pub named after the Battle of Trafalgar in Spain, and on a corner outside the South Bastion. This is a great football pub with scarves and momentos on the walls. A good place to watch the Gibraltar matches live in. It was £3 for a pint of Caffrey’s. 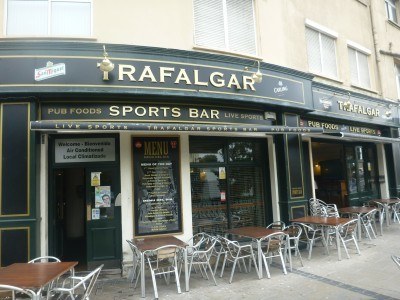 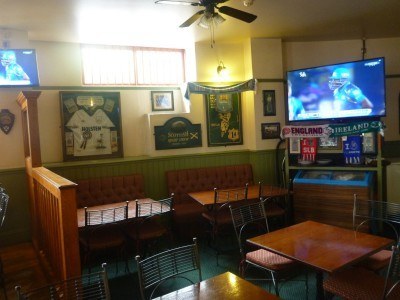 4.The Dolphin
When I first moved to Bournemouth in Dorset in 2003, my local pub was called the Dolphin. Sadly that one has since closed down but when I saw the Dolphin here near Europa point I had to pop in. 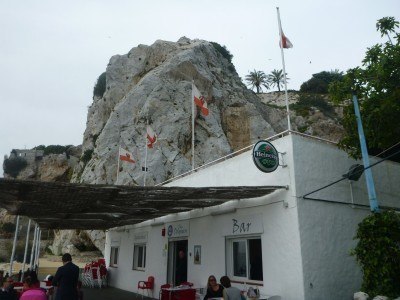 It’s on the walk round to Europa Point from Central Gibraltar. It was £2.20 for a bottle of Sol. 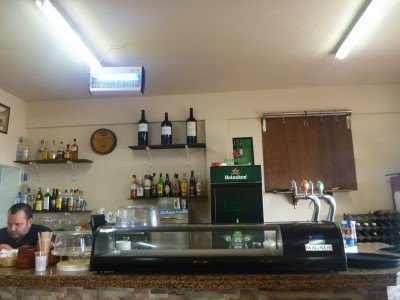 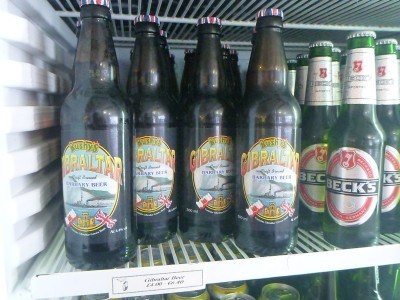 It wasn’t cheap though £4 ($6 US)- but when you are trying a new beer in a new country with this view, it all seems worth it. 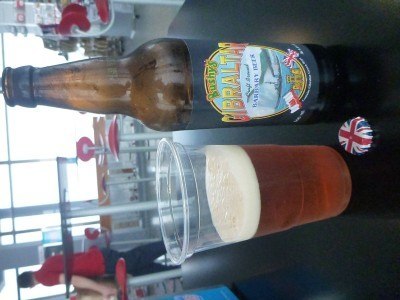 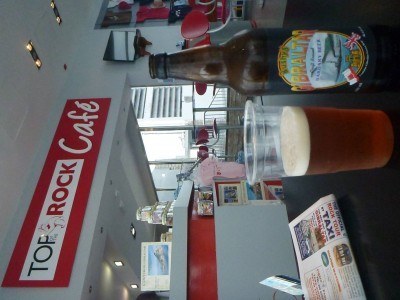 Another beer label and a beer bottle top for my collection and a pretty decent beer too! 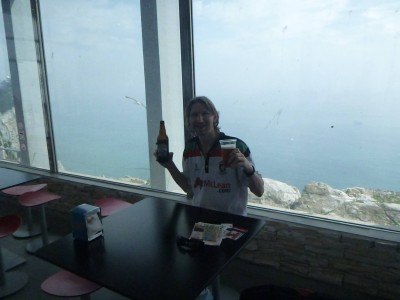 6.The Cannon Hotel Bar
I was staying int he Cannon Hotel and not only is it licensed but it has beer on tap. It was San Miguel, not one of my favourites but cheap and cheerful here. I wasn’t on a mad drinking binge of course so I just had a half lager in here, which was £1.20. 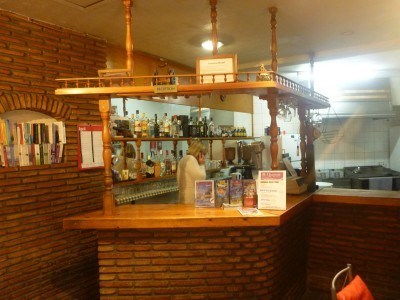 7.All’s Well
I was on Facebook updating my status with my Gibraltar stuff and my mate Graham Anderson commented for me to get myself down to All’s Well. So the next day, I headed here for a wee beer to dedicate to Graham and make a video for him. 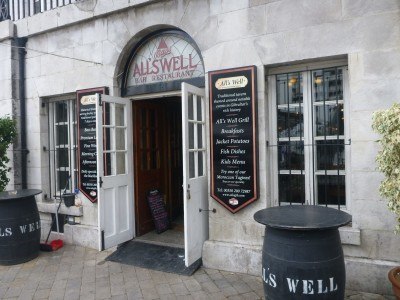 I was served by a Slovakian girl which was also freaky as Graham and I once toured Slovakia together watching Northern Ireland. All’s Well is in Casemates Square. 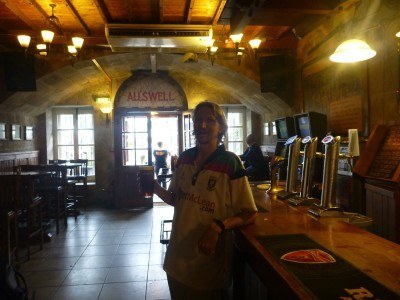 A beer in Casemates Square at All’s Well

The weirdest thing ever though – EXACTLY a week later I was actually with Graham and Luke in a pub in Bristol! How ridiculous is that? I hadn’t seen him in 6 years and then by chance I booked a flight from Bristol as it was cheaper. 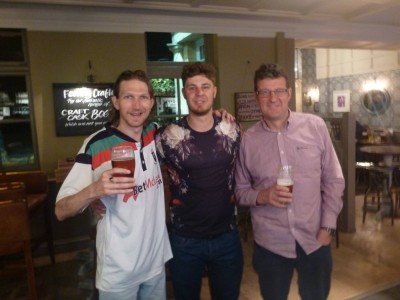 6 Year Reunion with Graham and Luke. From Casemates Square to Slovakia to Bristol!

8.The Square Cafe
I had my dinner here one night in the Square Cafe and though not the best on the list, it is in Casemates Square and has a decent beer garden and some good bottled beer selections. It was dear in here so I went for a half pint of lager which was £1.90. British Fish and Chips too. 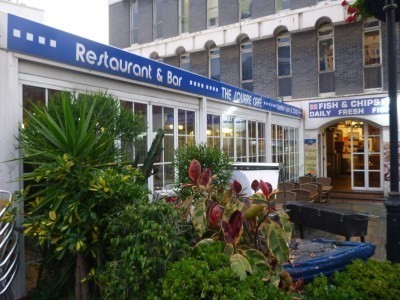 The Square Cafe in Gibraltar

Gibraltar is a backpacking surprise – go check it out! 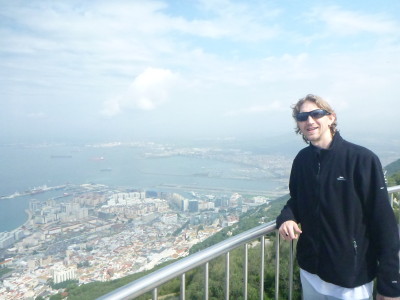 Backpacking in Gibraltar: Top Sights at the Top of the Rock

Here are some videos from my time drinking in the bars of Gibraltar:

7 thoughts on “Thirsty Thursdays: My Top 8 Bars in Gibraltar”