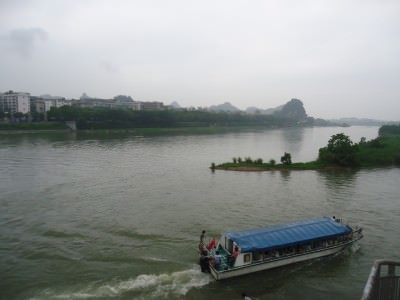 Top 5 things to see and do in Guilin, Guangxi Province, China.

You’ll hear a load of things about Guilin in China’s Guangxi Province and I was always fascinated to how much it is raved about, so I finally headed there. This was my 15th visit to China in fact and I clocked up my 10th province out of 29, but what was it all about? Rather than bore you with my trip and the ins and outs of the city, here’s my personal top 5 things to see and do in Guilin…only from the actual city I should stress, and not from the things outside the city.

Seven Stars Park is possibly the most important attraction in the city of Guilin though admittedly its least inspiring. Once inside you will realise it’s a long walk between the sights, which in all honesty are not exactly going to blow your mind. Yes, we went inside (at a discount rate I must add) but no, it’s not an essential, but I was clutching at straws so it makes the top 5. 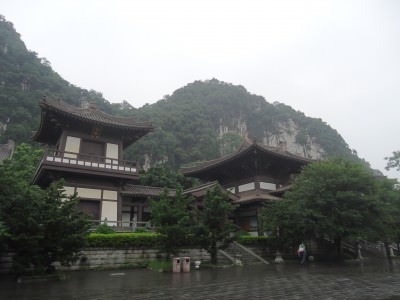 You don’t normally hear me talking so negatively, especially not about China, but it was uninspiring. Even the view of the park from outside was better than the view inside, so you needn’t bother going in. We spent 60 RMB on our entry ticket (normal price is 75RMB but if you chat to the Chinese locals outside, they’ll get you in cheaper).

If you go to Guilin and haven’t seen a river, I’d say you haven’t been to Guilin. River cruises can be cheap and relaxing so get on it! We ended up doing some bamboo rafting a lot further out of the city and down near Baisha, but head to the waterfront by the river in Guilin and the amount of river cruises available are vast. Just make sure yu bargain for a decent price. This is China, after all. 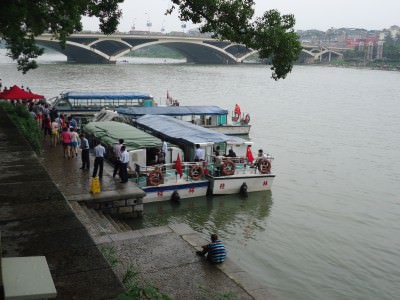 Boat cruises in Guilin offer lots of options along the Li River.

I got reminded of the Lotus Lake in Taiwan’s Kaohsiung when we arrived at Fir Lake (also known as Shan Lake). Needless to say I was completely inspired once again. I might be full of more hyperboles than you wish to hear, but what do you want me to do? Pretend it was shit? Because it’s not. Places like Fir Lake that are free to admire and beautiful make my day. I loved it. 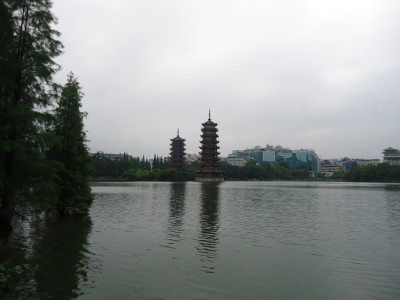 The sun and moon Pagodas at Fir Lake/Shan Lake in Guilin, China.

There are the sun and moon pagodas there. The Moon Pagoda is octagonal and is joined to the Sun Pagoda through an underwater tunnel. The Sun Pagoda itself has a claim to fame in that it is the world’s tallest copper Pagoda and also one of the rare ones with a lift in it! You’ll have to pay 40 RMB to go inside though.

Apparently it’s worth the 130 RMB entrance fee. Bollocks to that. we didn’t bother going. Are we travel cynics? Maybe, but I’m on a budget and for 130 RMB I can spend that on a full day of travel in China. I can get by on 100 RMB in fact, so to pay this for a two hour tour of a “peak” was out of the question. Besides, it was misty and foggy that day and I’ve seen a load of high up temples to last a lifetime. OK, this is a university on a hill, but I’m happy I kept my 130 RMB. 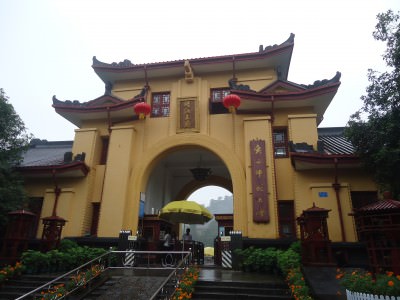 The entrance to Solitary Peak in Guilin. Let m know if it’s worth the 130 RMB entrance fee!

It’s a hill which has been declared “the shape of an elephant trunk”. Who really cares? I’ll be honest and say that I went to the front entrance, saw a way you could “get in for free” by climbing over a gate and just thought “I don’t even want to see this place for free”. I have no idea what I missed out on. So if you’ve been and loved it, please leave a comment and tell me. I just didn’t want to visit it. It’s a 75 RMB entrance fee by day, which rises to an unbelievable 260 RMB at night due to a “spectacular light show”. I dare say my torch has been through better times. 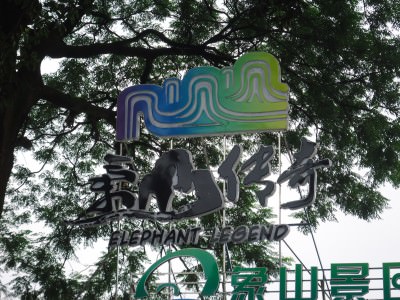 I know, I know, this is a “top 5” which has a couple of “negatives” in there so how does that work? I didn’t give Guilin that long as we wanted to head to Yangshuo and in the end stayed only one night in Guilin. Another thing I enjoyed was the street alongside the river, where we relaxed with a coffee, was loving the lifestyle once again… 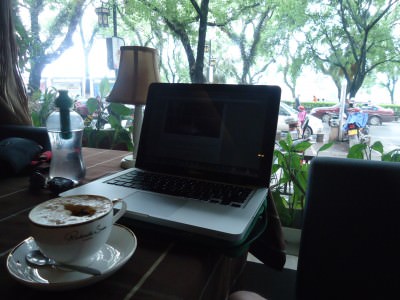 Time to relax in Guilin too with coffee and Wi-Fi by the riverfront!

Here are a few of my videos on Guilin:

7 thoughts on “Top 5 Things to see and do in Guilin, Guangxi Province, China”