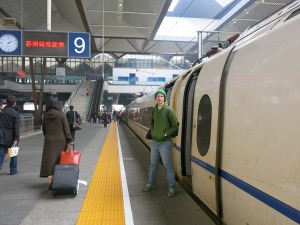 A guide to high speed rail in China! I love train travel and China makes it that bit more special!

Train travel in China is always exciting, I just love it. But Chinese high speed train is even more scintillating! With an influx of new routes, super clean, super fast trains, the age of smoky, shaking Chinese carriages are fading out. In the last 18 months I have taken a few trips on the high speed rail in China. And even splashed out on “First Class” just to sample it! That’s a “backpacker” travelling First Class (and guess what even the First Class was cheap enough!). 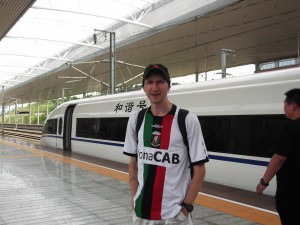 Travelling on the Shenzhen to Shaoguan route – high speed rail in China is just fantastic!

On my first high speed train in China I was on the Shenzhen North to Shaoguan route. Not a common route I must add, but in 2012 this gave me my first experience of the new high speed trains in China. We were heading to Shaoguan in order to see the mountains and rock formations at Danxiashan.

How to book your train in China

Don’t book anything in advance. Just turn up on the day and get it booked at the station. That’s the best and easiest way to do it – I know some of the routes are available to buy online – but travelling in China is always complicated – why makes things more complicated by possibly booking the wrong ticket online – head to the station and book it there and ten. If you’re out of luck and your train’s full, just get the next one, or find an alternative route. Remember this is China, the possibilities are always endless here. Join the queue at the station and get your ticket booked. 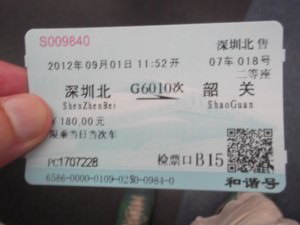 You WILL have trouble communicating to the workers in the train station, so make sure you know how to correctly pronounce the name of your destination and if you have the Chinese characters written down (or in a guidebook) it will be a lot easier to get it booked. All seats are allocated and you have to sit where your ticket says. 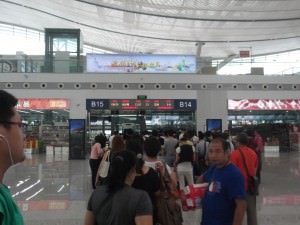 The queue for the Shenzhen to Shaoguan train.

My Journey from Shenzhen North to Shaoguan

11.52 am – At Shenzhen North Station. Go through the checkpoint at Gate B15 and get on carriage 7, seat 18. Leave within minutes, making Shenzhen disappear in a flash.

12.06 pm – Stop at Hullen Station for 2 minutes. Also pronounced or known as Tai Ga Doa (some Tiger reference I believe). We reach a speed of 306 kilometres per hour on this part of the journey. 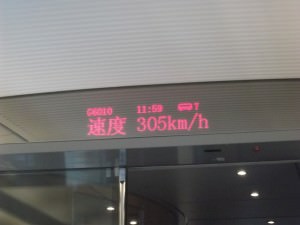 High speed train in China – getting over 300 kilometres per hour!!

12.26 pm – Stop at Guangzhou South for a few minutes. I’ve opened a can of Guinness and we leave Guangzhou trailing in our wake. A tough ask, given that it’s a massive city. We reach a speed of 308 kilometres per hour at 12.44pm – this turns out to be the maximum speed we reach on the trip.

12.50 pm – Stop at Qingyuan Station for 2 minutes. Another hour of high speed and epic countryside…

1.45 pm – Arrive at Shaoguan Station and we get off. Shaoguan is not the last station on this high speed train which heads further north. 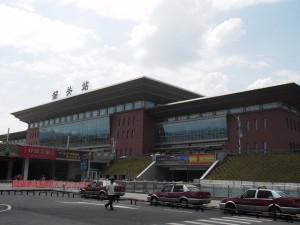 Things to do on a High Speed Train in China

– Crack open a tin of beer 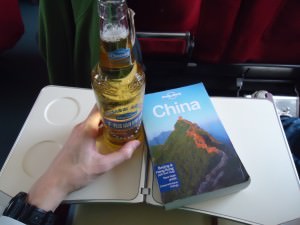 A beer and a guidebook on my China train travel bliss…

– Marvel at the train’s velocity

– Order some food (there’s a trolley that comes down) 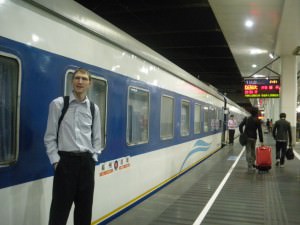 Boarding a night train to Yongding in the Fujian Province of China.

Here are a few of my Chinese Train Videos, a few of which are the High Speed Rail:

On a train from Shenzhen to Yongding:

On a train from Guangzhou to Shenzhen:

On the High Speed Train having a Guinness:

On the Hangzhou to Suzhou High Speed Train:

5 thoughts on “Train Travel: A Guide to High Speed Rail in China!!”