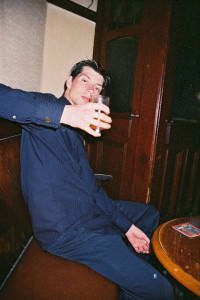 The night my mate drank a pint of his own piss for Children in Need: John Johnson.

OK so the crazy travel stories are going to keep coming I’m afraid. I’ve got a ton of tales locked in my travel cupboard and am finally releasing them on here – no holds barred!! You might have been part of my journey and if you have, you might well appear on here. Don’t forget that this is MY travel blog and I write what I want. I don’t want to be an “also ran” (and thankfully I never will be).

You won’t see me joining that list of “just another travel blog”. You’ll know these blogs when you see them – mostly people who don’t really travel at all. They have their own flat. They eat muffins and coffee at 11 am everyday. They will write boring, non-descript monotonous posts such as “Top 4 things to see in Madrid on a Tuesday” or “5 Travel things you must do in Sydney” or “Must visit beaches in Greece” or “Do’s and don’ts of LA”. I’ve thrown up all the food I’ve eaten before I’ve even clicked on their links. Repetitive, boring and they’ve probably typed the whole thing up from their office at home over a cup of coffee pretending to be backpackers. Funny how I never meet these types in hostels! Was that a rant by me?? Yes maybe but on with the business. I tell you what really happens when you are a budget traveller – stories like this one – the night my mate drank a pint of his own piss for Children in Need!!! 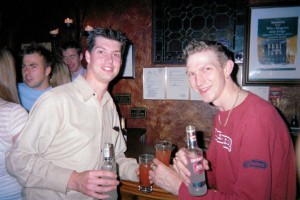 Having two simultaneous drinks with John in our London days a long time ago…around the time he drank his own piss.

So you’re getting a full on honest insight here into my life – it’s an open window to the world. These wild stories are from life on the road. We have fun but we have no shame.

“You don’t build a revolution sitting in a rocking chair.” Think about it.

Right onto the story – my mate once drank a pint of his own piss for Children in Need. How did that happen?

It was October 2004, I was sharing a flat in Bournemouth in England. I worked in a hotel bar at weekends, I studied during the week and I worked as a cashier on the tills as well. Life was pretty good and with a big social circle, alcohol and bars became a regular pastime.

A busy week of work had finished and Friday night was here – I had a night off and it was time to head to the student bar on the campus, known as Dylan’s Bar. I was actually in Dylan’s Bar more often than in the library in my student days. I like to study the world with my own eyes, not by reading some wannabe philosopher’s textbook while stuck in a library…

The beer was flowing – my best mate was there – Neil Macey (he might begin to feature a lot on here in fact – we have ended up living very similar lives and he travels and works his way round the world now too!). A few of my flatmates were there and there was one oddball – my mate John Johnson (a self confessed nutcase). John Johnson is his real name and if you have ever met him, you will never forget him.

The night my mate drank a pint of his own piss for children in need.

The bar had a fundraising night for charity. It was the UK Children in Need night. Spirits were high, all sorts of activities were on and students were more than generous. We all chucked in a bit into the pot as it came round and then one girl asked us “What are you doing for Children in Need?” and in fact apart from having a laugh and a jolly good piss up we weren’t doing anything. Then John shouts in with “I’ll do a dare and raise money!” We brainstormed and came up with a few x-rated dares for John to do – mostly stuff like getting naked or simulating sex in the student bar with a guy or a girl. This John by the way is the same guy who once shagged an inflatable donkey in my living room (I kid you not – a story for another “Don’t Stop Living day”). Finally John jumps up, necks the rest of his pint of lager and says “I’m going to drink a pint of my own piss for Children in Need, but only if I can raise £20.” We quickly rounded together the money and he pulls his fly (zip) down and is about to piss into the empty glass. Hold on, there are ladies about and besides we are all drinking around him. Nobody wanted to see him pissing into a pint glass in the bar – the bet was just for him to drink it.

So he rushes downstairs to the toilet and had to be accompanied by my mate Jody. Jody was there to watch him piss just to prove that it was really his piss he was drinking. We weren’t sure what was worse – Jody standing in the men’s toilets staring at John pissing into a glass or John drinking the pint of his own piss. A few minutes later the pair of them emerged with a pint glass full of piss.

I had a quick smell as I wanted proof and yes straight away I could tell – it was piss. Without further ado and to an audience of about 13 people he proceeded to down the piss in one go! Unbelievable. He did it – the piss/urine was gone – John had drank it to rapturous applause and to raise money for Children in Need. (OK it was only £20 but every little helps).

Fast forward five seconds and he was sick EVERYWHERE. And I mean everywhere – the vomit just kept coming – the table was covered and so was part of the sofa. It was a mess. We had raised our £20 but were now sitting in an area full of John’s sick from him drinking his own urine. It was absolutely horrendous and disgusting.

Myself and Neil made a quick getaway and the others followed while a cleaner came over to get rid of the mess “what on earth were you drinking?” She asked him. If only she knew…

Oh John, yes you John Johnson, in October 2004 you drank a pint of your own piss for Children in Need and were sick everywhere. It was monumentally horrific and I have yet to witness a single vomitation on a par with this since. I don’t recommend drinking your own piss, whether for charity or not. What I do recommend is to not stop living. I wouldn’t have things any other way!