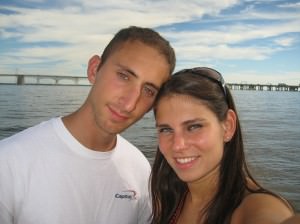 World Travellers: Dave and Vicky from A Couple Travelers.

Today on world travellers it’s the turn for yet another couple! Dave and Vicky from A Couple Travelers!

We’re Dave and Vicky from acoupletravelers! We just recently graduated college, worked for two years, and are now setting off on a two year journey around Asia and Europe. We blog about our travels, including budget saving tips, restaurants and accommodation reviews, and overall travel reflections.

For two years Dave worked as a business analyst at a financial services company, while Vicky was an accountant in Washington DC. We’ve had a love of travel ever since we were young, and have been going on trips together since high school. 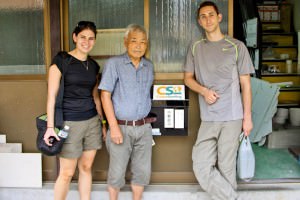 World Travellers: Vicky and Dave with Masahi our Host for the first two nights in Kyoto.

Vicky is originally from Moscow Russia. Dave is from Ashland Massachusetts.

Our about us page covers the list of countries we’ve been to before this trip. On this trip specifically, we’ve been to Japan, South Korea, China, Vietnam, Thailand, Burma, and Laos. 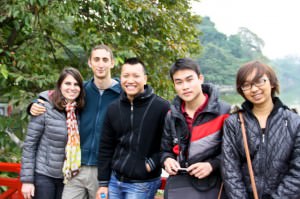 World Travellers: Dave and Vicky at a Couchsurfing Meet Up.

The most amazing experiences are always the kindness of others. We do a lot of couchsurfing so we see a lot of people extended their small homes or studio apartments to us, offering to show us around the city and to their favorite places. Once a 71 year old man take us in, cook for us, and show us around Kyoto, Japan – so hospitable, especially since couchsurfing is not really that popular in Japan. 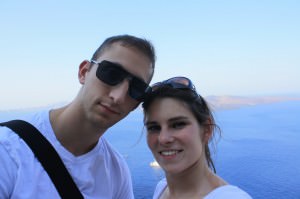 World Travellers: From the website A Couple Travelers it’s Dave and Vicky!

Ending up without money in remote villages, which has happened to us twice, surprisingly. We tend to forget to pay attention to how much (or little) money we have in our wallets, despite the fact that ATMs are not always that common in rural Japan, for example. In South Korea this resulted in a rather embarrassing experience where we had to ask the monastery we were spending the night at for a small discount.

I think the funniest may have been our Couchsurfing mix up in Seoul. We were staying with an English teacher and she asked us to leave the key in her dropbox on our way out for the day while she went to work. When we returned in the afternoon the key was gone. We rang the intercom and a strange man from her room answered and asked us who we were. He seemed pretty confused and thought we were intruders, so we had to convince him that we were staying in that room by describing what was in it. Once we did this, he let us inside, and we realized that he was also Couchsurfing in the same building but has mixed up the rooms and taken the key from the wrong dropbox. Quite the coincidence! 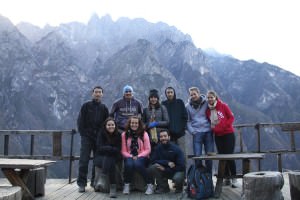 Scariest was getting separated from our trekking group in Burma for about 45 minutes. There wasn’t really anyone around so we were just out in the fields alone, walking and looking for anyone. We both thought that we were on our own and would have to find our own way to Lake Inle from the country side – we were about two hours away walking. Luckily our guide found us eventually. 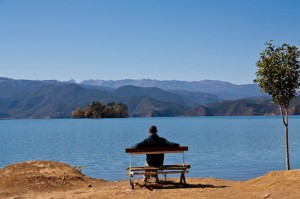 World Travellers: Dave, one half of A Couple Travelers relaxing by a lake…

1.     Be flexible with plans changing

3.     Be kind to others and respect their cultures

After Laos we’ll head to Cambodia and then to France to spend the summer in Europe. We have a pretty hefty line up and a lot of countries to cover!

Dave and Vicky are the authors of Travel and Food blogs A Couple Travelers and AvocadoPesto. Having spent 2 years in the working world, they exchanged their briefcases for backpacks, dress shoes for sandals, and beds for sleeping bags. In September 2012 they embarked on a 2 year journey across Asia and Europe.

Thanks to Vicky and Dave from A Couple Travelers for being the latest in my series of World Travellers! If you travel the world and run a travel blog or are a travel writer, please get in touch, you can be featured (there’s a waiting list at present), either e-mail jonny (at) dontstopliving (dot) net or head to my contacts page and get connected! You can also subscribe to Don’t Stop Living by filling in the form below! Safe travels!

5 thoughts on “World Travellers: Dave and Vicky From A Couple Travelers”