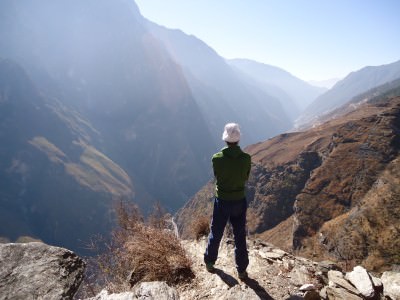 Admiring the amazing views on the second day of the hike near Tiger Leaping Gorge in Yunnan Province.

I must apologise for the lateness of this post. This is the second part of my two part guide to hiking on the Upper Trail Hike in China’s Yunnan Province in and around Tiger Leaping Gorge. To refresh your memory (and also mine), below are the previous two parts of the story which cover this part of the world. Things got a bit busy… 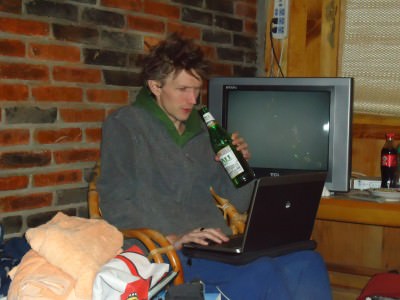 Finding time out after the first day of hiking to update my travel blog in the mountains of the Yunnan Province, China.

I wrote these both in early 2013, following my trip to the Yunnan Province in December 2012:

So finally here’s Part 2 of the hike, and the third installment from this region, which also saw me visit Shuhe Old Town, Zhongdian/Shangri La and Ganden Sumtseling Gompa! 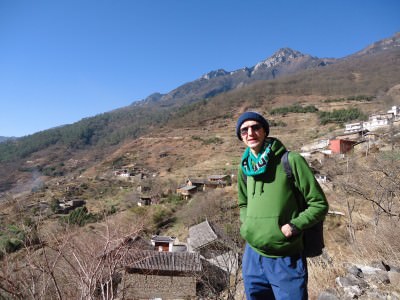 At the start of Day 2 of the Upper Trail Hike, Yunnan Province, China.

So we had made it to the halfway house and slept in the warmth of a double bed at the Halfway House. The next morning we were up and having breakfast. It was cold. Very cold. Gloves, hats and scarves were needed as we ate eggs, tomato and pancakes and sipped coffee on the balcony at the Halfway House. It was 7am. 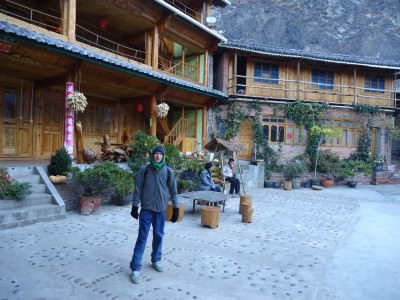 In the courtyard at the Halfway House ready for the onward hike on the Upper Trail Day 2.

I’ll just post a load of photos from the breakfast and place we stayed the night here. It’s known as the halfway house and is a great travel moment. 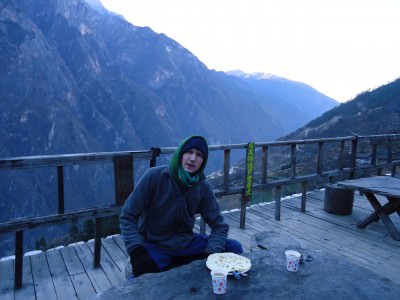 Breakfast up in the Yunnan Mountains in the cold morning at Halfway House.

The balcony at the half way house is the place to have breakfast. Yes, it was freezing and we could have sat downstairs and indoors in the warmth. But these things only come up once a lifetime so we had to be out on deck to see the views. 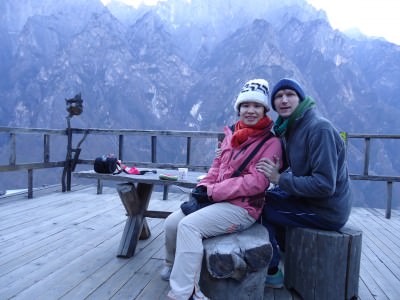 Panny and I ready for day 2 of the hike at the Halfway House in Yunnan Province, China.

There were a few others there joining us for breakfast for sunrise. We met, shook hands, and then headed on our separate ways. I don’t remember their names but a couple of guys from Israel, a couple from Netherlands and Germany and of course the Chinese! 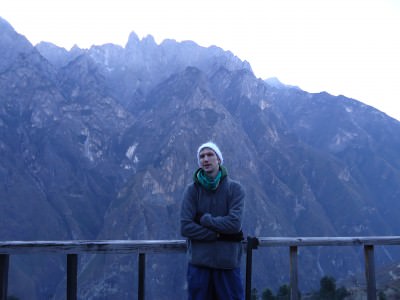 Pre sunrise at the Halfway House on the Upper Trail Hike in China’s Yunnan Province.

The staggering contrast in heat from the sun coming up to it not being there is staggering. Don’t just believe my photos – t-shirt on and sweating on the way down to Tina’s, yet wearing 2 jackets, a jumper, a t shirt, scarf, hat and gloves pre sunrise. It was Christmas Eve (24th December). 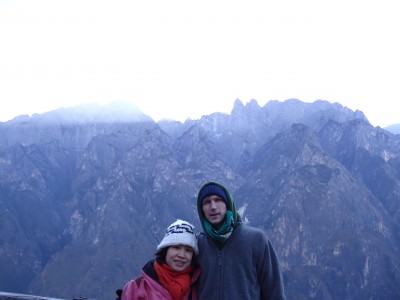 Ready for day 2 of the hike enjoying the cold mountains and view in Yunnan Province, China.

My girlfriend Panny Yu had been to see the Tiger Leaping Gorge before, but not on the Upper Trail hike. I think she enjoyed the sunrise moment in this epic scenery. 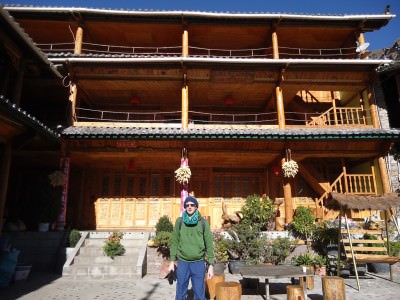 The sun shines down on the halfway house and it’s time to start the hike.

There was no real rush on Day 2 and it was meant to be an easy hike, after the previous day’s 28 bends section and the amount of walking involved. Besides we had started the first day in Shuhe Old Town near Lijiang and had 3 buses to get to the start of the Upper Trail Hike. We were tired before we started, so day 2 had to be easier… 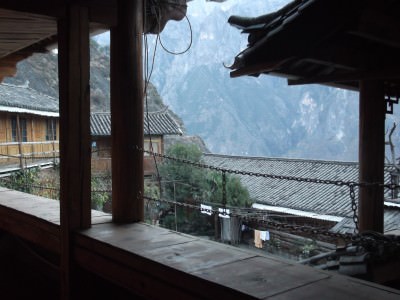 At breakfast we made small talk to the other hikers. Panny and I do our own thing when we hike, and we walk at our own preferred joint pace, but we mingled in the morning and spoke to people from Israel, Germany, USA, Netherlands and Poland. Our fellow hikers all headed off before us. Basically the Halfway House offers stunning balcony view into the valley and of the mountains behind. But it’s cold so everyone waits until sunrise before heading off. Then it gets hot. It’s a stark contrast.

After our balcony photos and admiring the entire views, we head off on the hike. The end for us will be at Tina’s Guesthouse as we have decided to get the 3pm bus from there onwards to Zhongdian/ Shangri La (a city I covered before here – Backpacking in Shangri La). First some downhill walking, some epic landscapes, some dodgy cliff edges and some waterfalls. 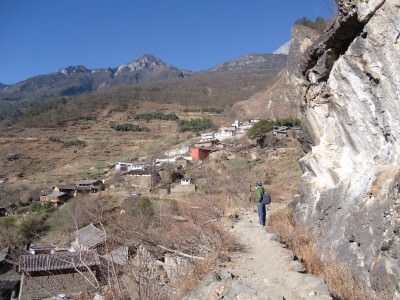 On the Upper Trail Hike Day 2 in the Yunnan Mountains, China.

The second day is honestly a walk in the park – it really is mostly straight or downhill. Nothing too tricky! Savour the views!! 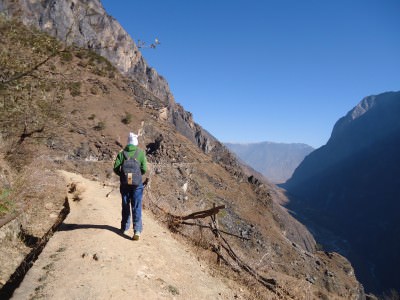 You pass by a waterfall and there are some steep cliff drops so you do have to be careful. 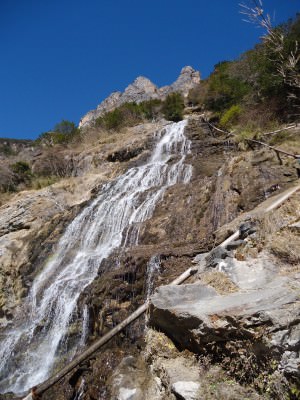 The waterfall on route.

There are a few really cool spots to take cliffhanging photos, so we indulged… 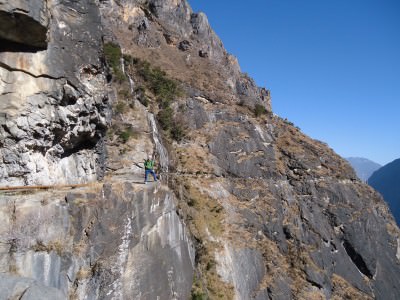 At the edge of one of many cliff edges on the hike! Great views! 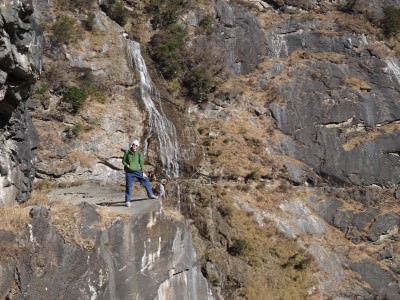 The views are extreme and the drops are steep!

Experienced hikers won’t have a problem at all on day 2. After a few hours, you’ll see a settlement ahead and that’s Tina’s. The walk down is through some easy terrain

On the way down to Tinas Upper Trail Hike – Yunnan – China

Most interestingly for me was seeing the Tibet arrow on this part of the hike. 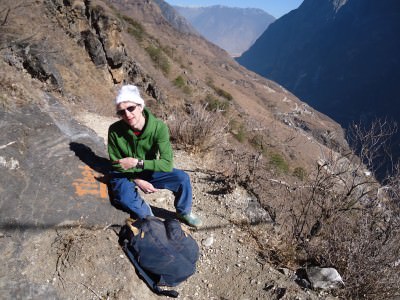 The sign for Tibet! All became a bit magical on the hike to Tina’s on Day 2 – we’d be heading to a Tibetan Monastery the following day…

Let’s not forget that Tibet is indeed “that way”, though a few hundred kilometres away and with the need for a visa/entry permit. The following day though, we were heading to the Tibetan Monastery at Ganden Sumtseling Gompa. 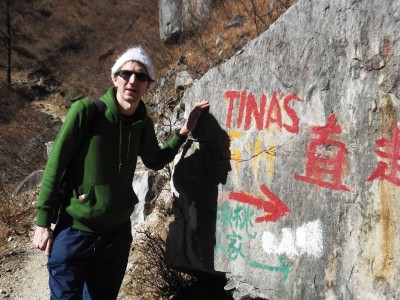 Following the arrows to Tina’s Guesthouse, where we ended our 2 day hike.

The final descent to Tina’s was shrouded in glorious Chinese sunshine and we were pretty content we had completed the hike. We got to Tina’s around 1.30 pm and the bus wasn’t until 3pm. 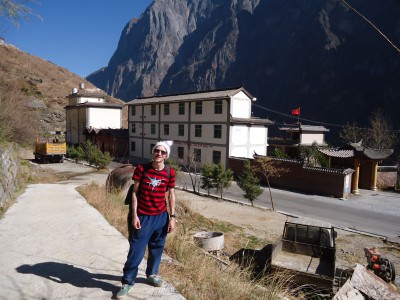 Arrival at Tina’s Guesthouse and the end of our 2 day hike in Yunnan.

We didn’t do the long hike which leads beyond Tina’s, but after day 1, it was nice to make it to the base at Tina’s nice and early. Then we had something to eat, I had a beer and we booked our seats on the onward bus to Zhongdian (Shangri La) – you can also get a bus to Lijiang from Tina’s, or continue on the hike. 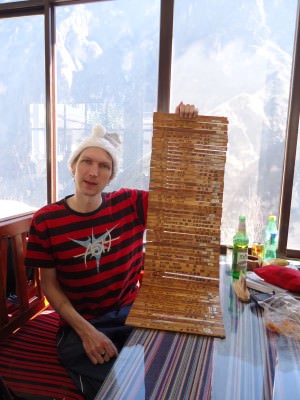 There was an interesting menu at Tina’s and the beer went down well. 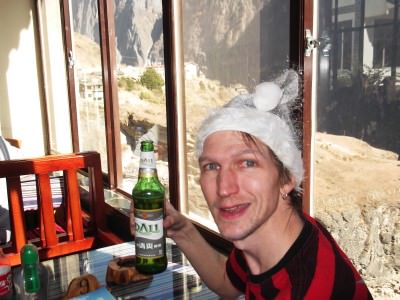 Loving my beer at the end of the hike in Tina’s – cheap too! Merry Christmas!

It had been a great couple of days hiking in China. I highly recommend the Tiger Leaping Gorge area and the Upper Trail hike. 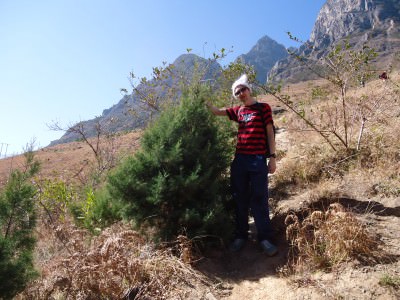 I did the hike on Christmas Eve. I found a Christmas tree and wore my Santa Hat!

Here are my videos of the Upper Trail Hike Day 2: