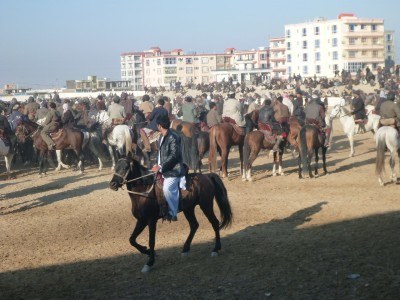 If you’re ever backpacking in Afghanistan, make sure to get a trip to a local stadium to watch the national sport – Buzkashi! It’s the iconical backpacking in Afghanistan experience, and I had to get a visit to a Buzkashi game sorted during my time in the country! This was such an exciting experience! After crossing the border at Hayratan, I toured Balkh and Masar e Sharif and next up was to watch the Buzkashi. It was one of my top experiences in the country and I loved it. It was just so unusual. Instead of going down the pub and heading to Dean Court to watch AFC Bournemouth with my mates, I was off to watch Buzkashi in downtown Masar e Sharif on a Friday afternoon. Bring it on! 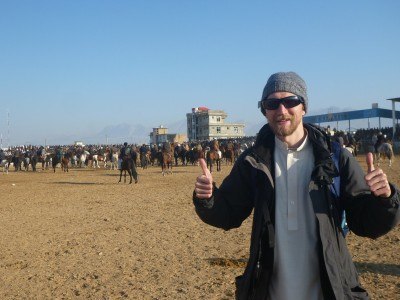 Maydani Buzkashi Stadium
I headed to the Maydani Buzkashi Stadium in the city of Masar e Sharif for my first ever Buzkashi experience. This was an epic afternoon of sport here. I was the only tourist in attendance and I loved it. The stadium is massive – it’s a huge field with a surface of mud. The capacity is probably over 10,000 all in but as I look around the stadium and chat to Noor, my guide, we reckon today there are around 4,000 people here. 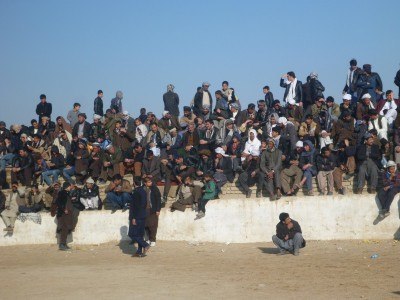 The stands of Maydani Buzkashi Stadium

On the pitch, there are probably around a hundred horses, though this is also hard to count in fairness. 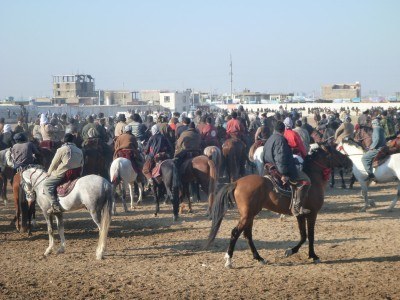 So what’s Buzkashi all about?
Buzkashi translates literally as “goat dragging” in Persian, and is also known as kokpar or kupkari. It is a Central Asian sport in which horse-mounted players attempt to drag a goat or calf carcass round a pole and drop it into a circle! These days it tends to be a calf, a baby cow that is used instead of a goat. It is the national sport of Afghanistan, although it was banned under the Taliban regime. Traditionally, games could last for several days, like cricket! But these days on Fridays, it normally lasts around 3 hours. From 2.45 pm until just before sunset. 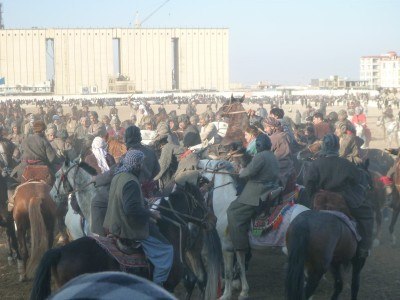 I had a grandstand seat, entry is 20 Afghanis (about 30 US cents) and the sport is very special here, especially since it flourishes now after being banned during the Taliban regime. 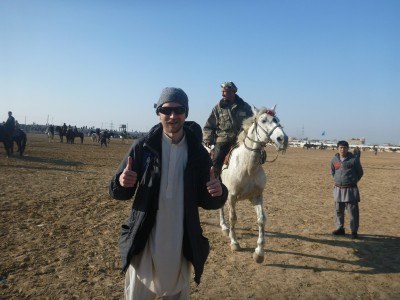 How to Organise A Vist to Watch Buzkashi
You need to time your visit to Afghanistan to perfection to catch this one! First of all it only happens in the winter time, as the summer gets too hot for the horses. Secondly, it normally happens on a Friday. So you should aim for a winter Friday and try and base yourself in the north of Afghanistan for this. I was on tour with Untamed Borders and I made sure that Buzkashi was part of my itinerary in the country. 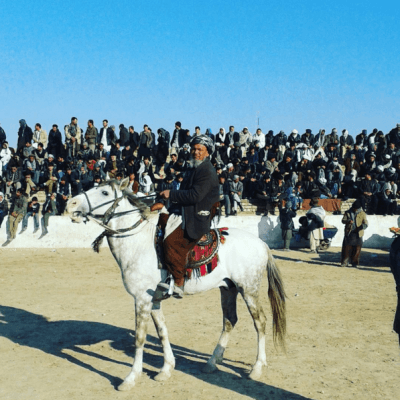 Although Buskashi is the National Sport, Noor tells me it is mostly based in the north of the country, at least the best Buzkashi. The reasons for this are many. Firstly. the south of Afghanistan borders Pakistan and in that region, cricket is the main sport. Another key reason is that the city of Masar e Sharif is closer to agricultural areas where horses run naturally in the wild. Kabul has Buzkashi too, but the city appeal of Kabul means that the horses there are not quite as strong as those in Masar e Sharif. So take the hint – don’t base yourself in Kabul, head to Masar e Sharif. 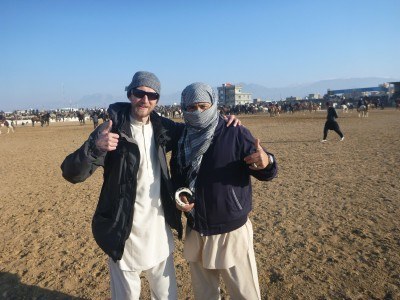 Noor and I watching Buzkashi 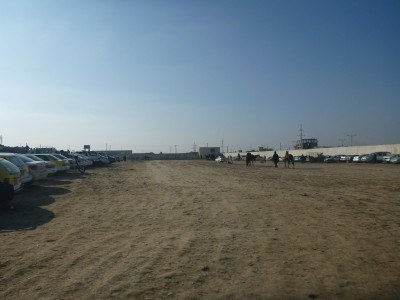 The car park and entrance

Entrance Fee for Watching Buzkashi
We paid 20 Afghani each, which is about 30 US cents, so a real bargain to watch a live event of a national sport, in the best stadium in the country. 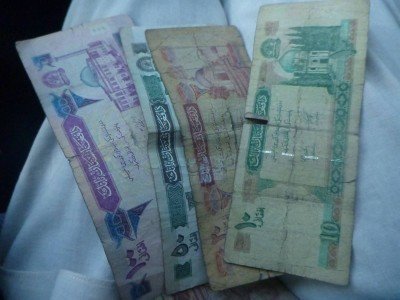 It will cost just 20 Afghani to watch Buzkashi

Bearing in mind I paid over £30 to watch AFC Bournemouth this season, it’s a pretty good deal! You pay at the entrance and that’s you for the afternoon. There is no ticket issued and nobody really checks anything. I had my backpack with me and that was cool to take in. 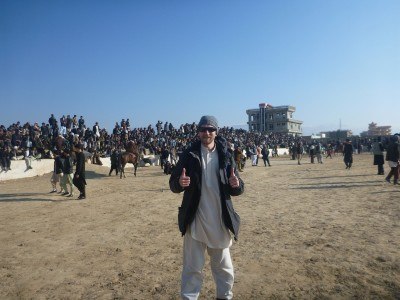 Arrival at the Maydani Stadium for Buzkashi

How Long Does Buzkashi Last?
Again, this varies, the Buzkashi used to go on for days, but after the Taliban regime banned it, it’s now a bit shorter, so make the most of it. On most Fridays in winter here in Masar e Sharif, the Buzkashi runs from 2.45 pm until sundown. We’re talking 3-4 hours maximum. The rules in the south of Afghanistan vary and the games have a more defined timeframe there. 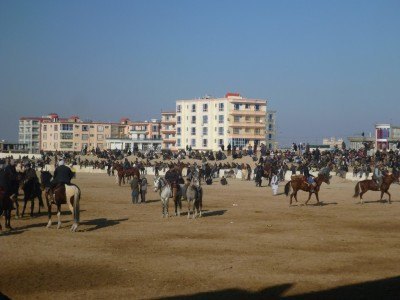 What are the rules of Buzkashi? How can you play?
If you are rich enough to own a good horse, then you can join in. It’s a male only sport and males only are allowed in the stadium. There are no females in sight and this is common on your backpacking journey through Afghanistan. To join in, obviously you’ll need a horse, need to be strong, understand the rules and have a horse whip and saddle etc. 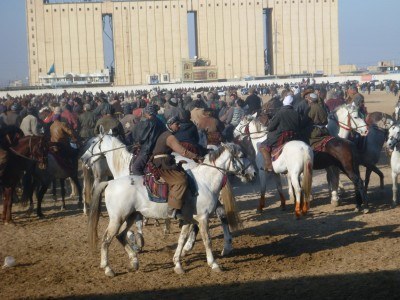 Anyone with a decent horse can play

The general rule of the game is that you have to carry a dead cow on your horse all the way round a post and back to the circle. To start with, the dead carcass of a cow is on the ground. Each horseman has to try and grab it. Whoever has the cow then has to race their horse around the post and back to the part of the stadium with the white (painted) circle and drop the carcass in there. If they do that, they win the game and the dead cow. 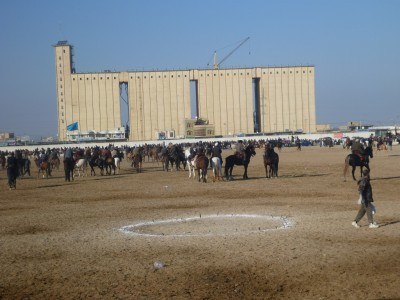 The circle where the winner places the dead cow 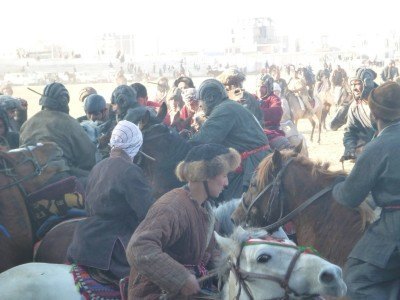 Caught in the thick of the action

As long as those are adhered to, the winner will always be the person who places the dead calf into the circle. There is a referee to oversee every game. There is a prize of 2000 Afghanis for the winner. If you check this article from the Australian Afghan Embassy, it’s really detailed about the history and rules of Buzkashi. 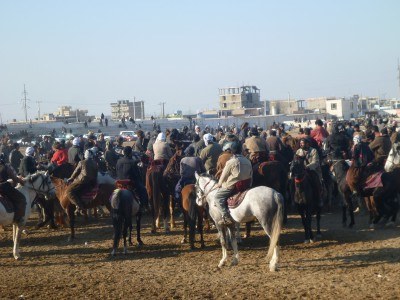 The thick of the action at Buzkashi in Afghanistan

My Grandstand View
We watched the first part of the Buzkashi from the ground, right up next to the horses at one point, we nearly got run over! But then a treat was in store. My guide Noor knows the staff here and he walks me, recognisable as the only tourist at the event up to the Grandstand! I have to admit, I felt a little bit like a VIP in here. The Afghan soldiers greeted Noor and Reza and shook my hand, welcoming me to Afghanistan. It was really friendly. 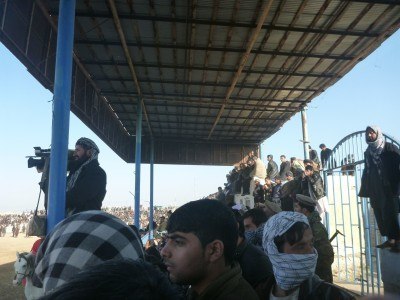 The Grandstand at Buzkashi 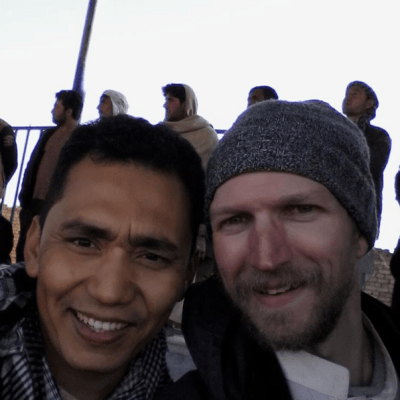 In the Grandstand, I got a better view, I could also sit down if I wanted. There was a guy videoing the event and even some guys at the back standing on pillars to watch it. 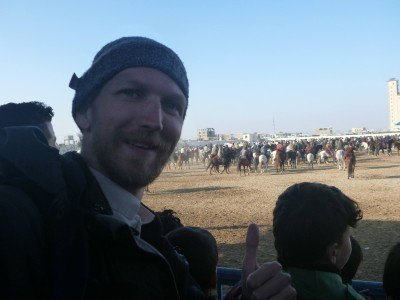 VIP experience in the Grandstand! 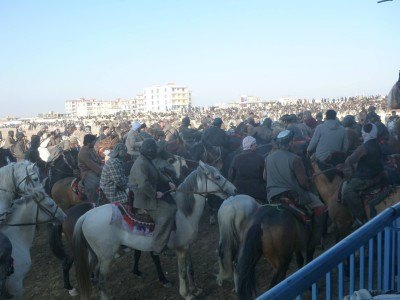 My view of the Buzkashi from the Grandstand 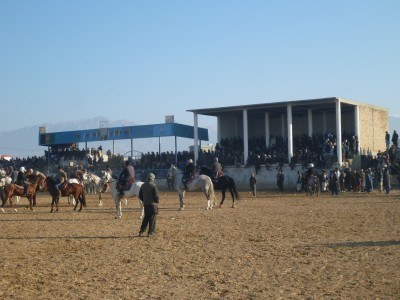 The Grandstand in Masar e Sharif 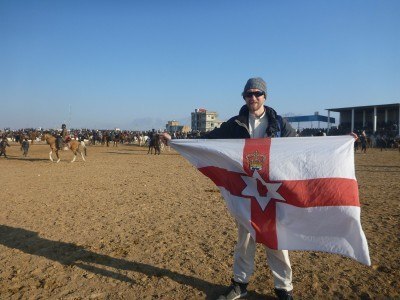 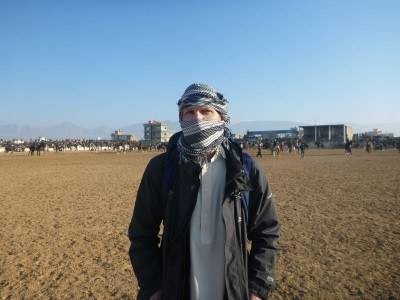 Trying to blend in with the Afghan lads! 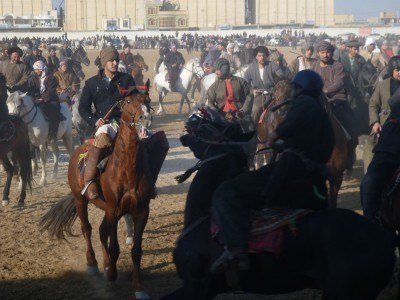 Up close and personal to Buzkashi

We stayed at the Buzkashi for around 2 hours – you can come and go as you please. It’s not like football where you stay for the full 90 minutes (and stoppage time). You can watch as many contests as you want and then go. During the time we were there, I have no idea how many games were played, but certainly over 10 times we saw a horseman place the dead calf into the circle. Thanks so much to Noor and Reza for being such great guides and taking me to Buzkashi. 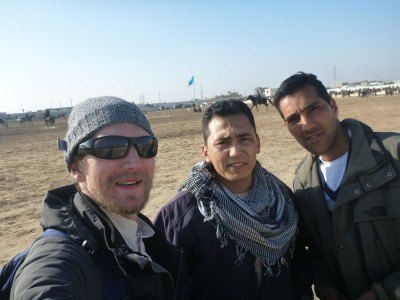 Noor, Reza and I watching Buzkashi

This is really just a short overview – I recommend going there yourself to check it all out! Afghanistan is a cool country to go backpacking in. You might also like my guide to getting an Afghanistan visa, my Saturday night out in Masar e Sharif and the time I tried Mantoo for the first time – Afghanistan’s national dish. If you want to visit Buzkashi, get in touch with Untamed Borders:

Here are my videos from my incredible experience watching Buzkashi in Masar e Sharif, Afghanistan: