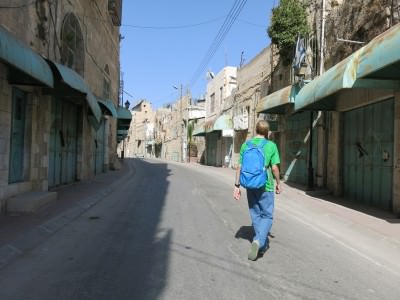 I grew up on the streets of Northern Ireland back in the 1980s, which means that cultural, political, religious and geographical divides have always been a part of my life. Whether I’ve wanted them to be or not. As my travel lifestyle has developed over time, I have become much more intrigued by the parts of the world that are sadly still experiencing war, hate and bloodshed and those trying to change from a history of problems (recently I was in Iraq, Ethiopia, Bosnia,Afghanistan and Nagorno Karabakh). Turning these problems into peace is every man’s dream. But the reality is, places like Hebron in Palestine are divided cities for a reason. Until you’ve been there, you don’t have a clue! This will be the first of two parts to my story on backpacking in Hebron, as I visited both sides of the city’s obvious divide, known locally as H1 and H2. This first part covers H1, the Palestinian side. 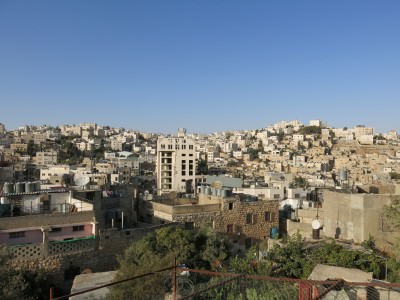 The city of Hebron, Palestine.

So I was backpacking in Israel and Palestine and decided on a full day trip to Hebron as part of a tour with Abraham Tours that allowed us to spend half a day on both sides of the city. Our bus left from Jerusalem main bus station and yes, the windows are protected and almost “bullet proof”. 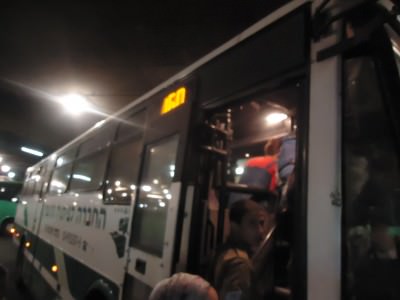 Our bus from Jerusalem to Hebron – double glazed windows, just in case.

Just to put things into context here. The week before my visit to Hebron, an Israeli soldier was shot dead by a Palestinian sniper (we walked past the spot). This trip ain’t for the faint hearted. It’s an eye opener. In general though, it’s a safe enough trip and you’re advised to do it with a guide – besides you get a better insight into the situation with a guide. 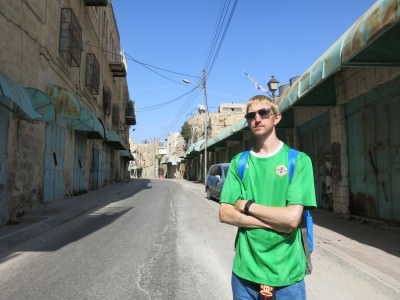 To put things into perspective – an Israeli soldier was murdered here a week before my visit.

The special thing about my trip to Hebron was that I got into both sides of the divide, on a “double narrative tour” run by Abraham Tours. I was with a Jewish tour guide taking me through the Israeli controlled section, and I was with a Palestinian tour guide taking me through the Palestinian controlled section. It was Palestine in the morning, and Israel in the afternoon, well so to speak. Locally, in English at least the sides are known as H1 and H2, almost as a cover up for the fact the city’s name is Hebron. I’d prefer if it was called Israeli Hebron and Palestinian Hebron though, as throughout the day I got confused as to which part was H1 and which was H2. 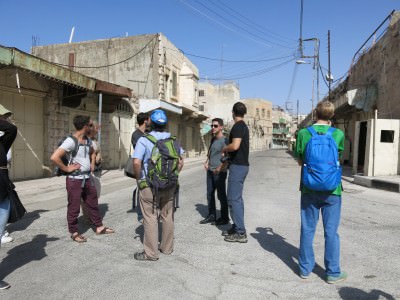 Our group assembles on Apartheid Street in between H1 and H2, Hebron.

To start the tour we get off the bus on Apartheid Street. Nice place for an introduction. With a name like that I had flashbacks to my time in Soweto and Pretoria. Here though, the meaning is the same. It’s two separate religions, separated by a street which these days nobody lives in. The street was evacuated some years ago due to the high tension. All the houses are boarded up, they have turquoise doors and the place hasn’t seen any dwellers since the 1990s. Currently, that’s the way it will stay. We leave our Jewish guide at this point, and head “across the border” into H1. Let me explain… 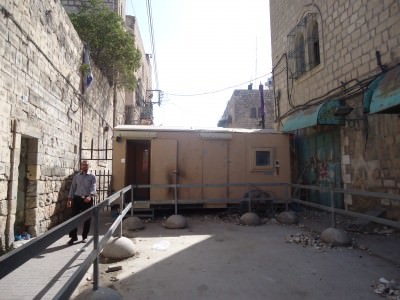 This hut actually marks the “border” once you pass it you have left Israel and are now in Palestine – H1.

Background on Hebron
Modern day Hebron is a Palestinian stronghold and houses a Palestinian population of 160,000 or thereabouts. There are also around 700 Israelis living in Hebron giving it that divided edge. These figures don’t include the Israeli army that man the city day and night – 24 hours a day this place is under Israeli army control. They’re all armed. It is illegal for the Palestinian soldiers or police to carry a gun. For these reasons, Hebron is split into two and referred to as two separate parts – H1 and H2. H1 is controlled by Palestine and H2 is controlled by Israel. However the borders are manned by Israeli soldiers. You can feel the tension in the air. You can see it with your own eyes. 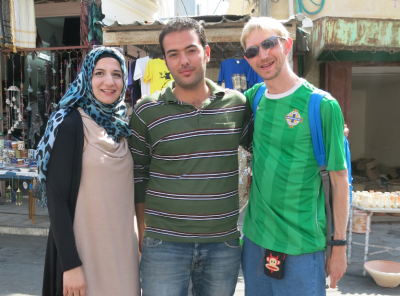 Touring Hebron with Mohammed my guide and one of the Palestinian ladies.

Arrival in Hebron and crossing into H1
We meet our Palestinian guide Mohammed and are taken through a security hut which doubles up as the border between H1 and H2. We leave H2 and we are now in H1. We’re on a prominent corner in downtown Hebron but we take a walk down a side street again and back towards the border. Mohammed points out the dividing wall. It’s a dead end street with bricks, bottles and a notable gap between what you could describe as Israel and Palestine. This is a world border right here. Hebron is sadly a flashpoint in the conflict here and this becomes apparent throughout the day. 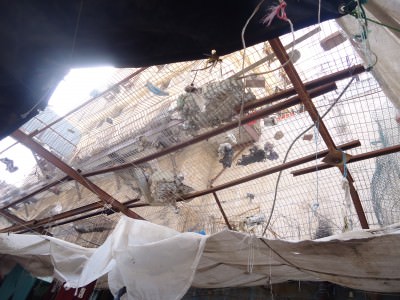 Rubble thrown from Israelis into the Palestinian side of Hebron

We are taken through the market to meet the Palestinian locals. The market itself is average. On route there are signs that the Palestinians are hemmed in here. They don’t appear to have any freedom from what I can tell. There are bricks on top of wire fencing over the market. It’s a hard life for them here, that’s for sure. You don’t make stuff like this up just to show the tourists. 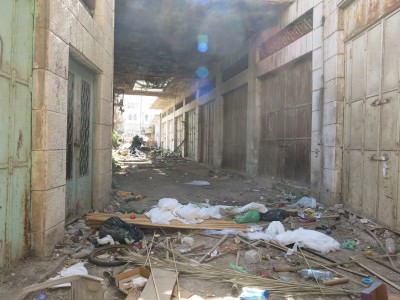 Rubble in Hebron near the border to the Israeli side. 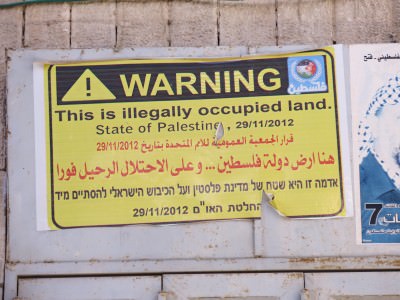 We’re now in Palestine and this land is illegally occupied by Israel.

The bricks have come from the Israeli side, but the locals refuse to surrender to their demands. We are ushered up some stairs into a flat which straddles the “border”. 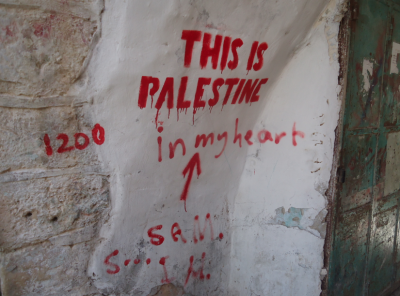 A reminder of where we are: This is Palestine 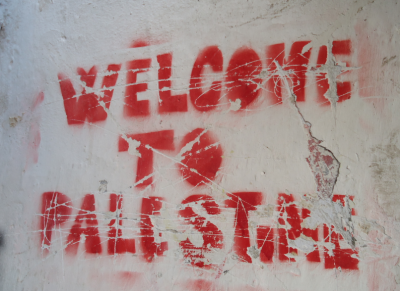 A reminder of where we are: Welcome to Palestine

Coffee With the Locals
We have coffee and a chat with a local guy who lives right on the border. One of our tour group asks him why he doesn’t just move to a new flat, when his children are at risk. He gives the obvious and expected answer “this is my home. I’m not moving”. 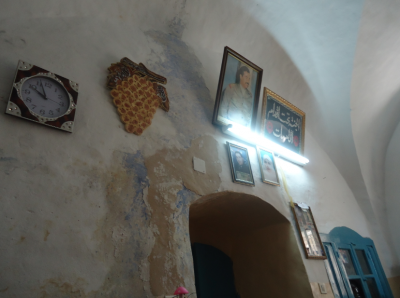 Inside the Palestinian House in Hebron

He also admits that for $100,000 US Dollars he also wouldn’t move. These are Palestinian family homes and have been for generations. For now we side with Palestine. I have Israeli friends who may read this, but when I see things like this, I know Palestinians have it harder than the Israelis. However I do see a picture on the wall of Saddam Hussein, which I found a bit chilling, especially now that I visited Amna Suraka in Iraq. 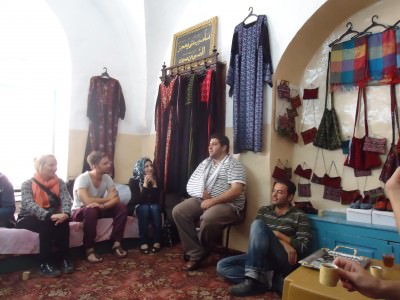 Inside a local Palestinian house for a chat and a coffee

Ibrahami Mosque
After the market and the Palestinian house visit, we head into the Ibrahimi Mosque. This Mosque has security gates on the way in, and we are on the Palestinian side. The Mosque is also a synagogue. Confusing eh?! Yes, this building has an entrance for Jews and an entrance for Muslims. Probably the saddest and most telling part of the entire tour. There was a shooting here in 1994 – while Muslims were praying a Jew walked in, and opened fire. Shocking. 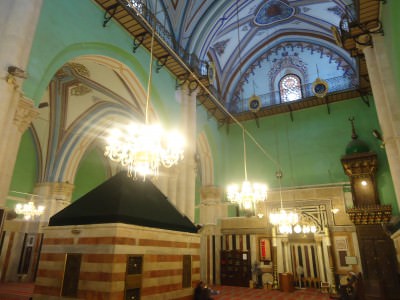 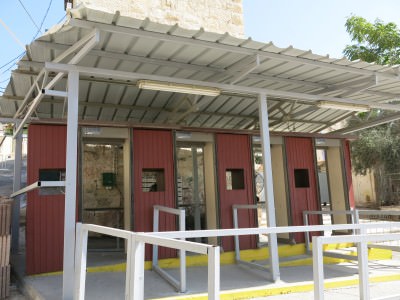 High security in Hebron – turnstile entrances to the Ibrahimi Mosque.

Inside the Ibrahimi Mosque is a holy Muslim place of worship, so we dress appropriately and take our shoes off. As we should and as you should too, out of respect. However I get angry as I see a lot of disrespectful Jewish people walk on in, without removing their shoes, some of them even wearing shorts and laughing about it. I find it completely disrespectful to the Muslim religion. In a holy place. These Jews even have the audacity to take photos and laugh at the fact that Muslims are prayer. I’m a bit disturbed by it. 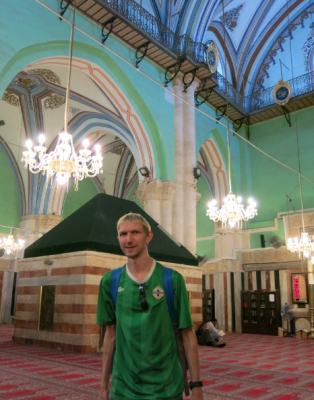 Inside the Ibrahami Mosque in Hebron H1 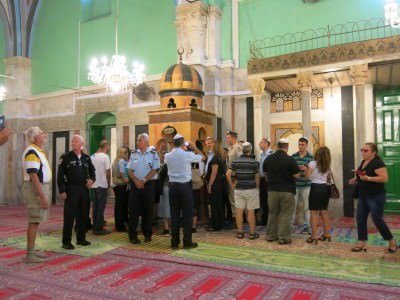 Jewish people wearing shorts, standing on the carpet and taking “glory photos” for their smartphones by not respecting the Muslim Faith. You should dress appropriately here, cover up and take off your shoes.

Buying Palestinian Coins
After this we leave the Mosque and venture through another street of market stalls. I buy some Palestinian coins in the local market for my collection. Banknotes are not available, and I have picked up some postage stamps in Bethlehem before. It feels like a different country. In my belief it is. 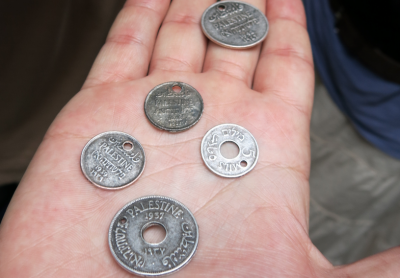 Adding some Palestinian coins to my collection in Hebron 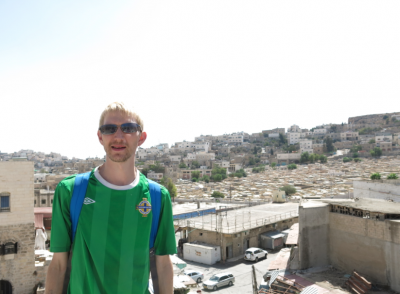 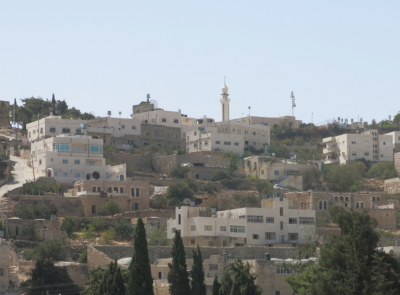 View up to the higher parts of Hebron in Palestine

Hebron Museum
After the viewing tower we head to the museum on the Palestinian side, which was also once a bath house. It’s not that interesting but one thing of sadness I note is that there are NO other visitors to this museum. Had it been on the Israeli side, it would have visitors. 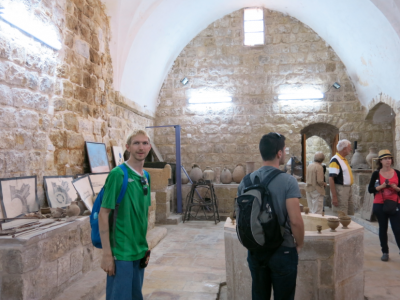 Inside the museum in Hebron, Palestine

The fact is, this museum is hard for the Palestinians to promote. Even the upkeep of it is a struggle, they’ve made an effort and I admire that. We had a quick overview while inside. The map at the entrance which showed the puzzled city of Hebron with its borders was fascinating. 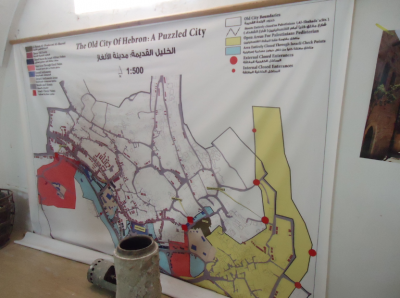 Inside the museum – Hebron – a Puzzled City

Lunch in Palestinian Hebron
Lunch is served politely, courteously and in generous portions as we eat hummus, salad and chicken with a local Palestinian family. At our table however we eat with a cool Belgian couple, that by coincidence we later had dinner with that day. 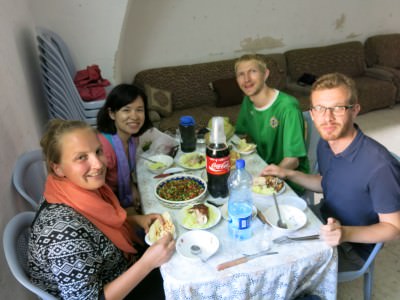 We had water and coke to drink. A side salad and chicken and pitta bread with humus. Panny and I shared our meal to save money. The meal isn’t included in the tour price. 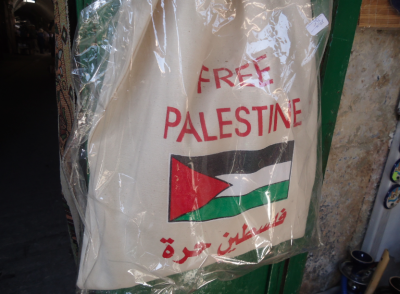 Leaving Palestinian Hebron/H1
After lunch, we are “relaxed” back into H2, the Israeli controlled side of Hebron for our tour by the Jewish guy. This is where things get odd. 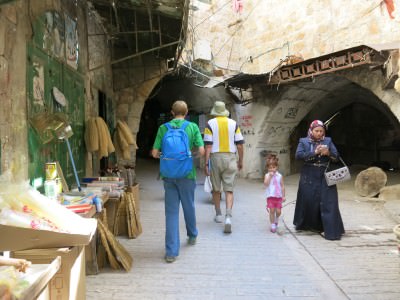 Backpacking my way back out of Palestinian Hebron H1 and into the Israeli controlled part.

I’ll report on the Israeli side of Hebron too at some point, in the meantime here are my videos from the Backpacking in Hebron: H1 Palestinian Side :

6 thoughts on “Backpacking in Hebron: H1 Palestinian Side”