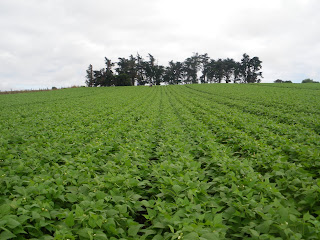 Once you’ve worked in “weeding” in your life, I would have to say that most other jobs seem easy. I didn’t plan to do weeding, but while employed by Work Direct (A harvest and labouring work agency in Devonport, Tasmania) I told them I would do any job, and this often meant getting phone calls and getting asked to do weeding. It was great to do weeding, as on my days off from broccoli I could still work and get a bit of extra money and a day out, even if its weeding! 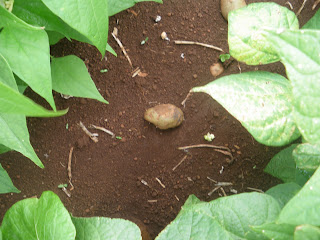 The first field I did weeding on was a bean field in Wesley Vale, which was full of beans, ready for harvesting so we had to finish the field so the bean harvester could collect the beans only, and not any weeds. The main problem in this field was that the previous year the field had been used for potatoes. 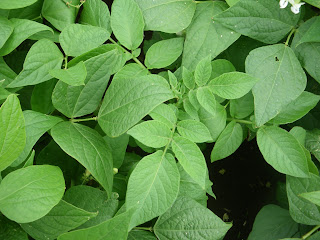 What with crop rotation and all that, some of the potato plants had started to grow again, in amongst the beans, so they had to be removed. The way to do this was to get down on your hands and knees and remove every single potato plant (and while you’re at it – any other random weeds). 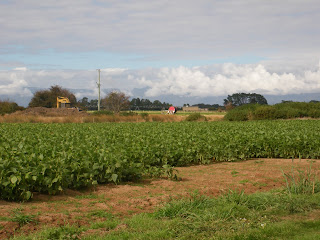 To begin with it was pretty annoying and hard to spot every weed, but within 30 minutes I was a weeding expert…I could spot the potato plants just from the leaves. The bean and potato leaves are very different in shape and size, as you can hopefully tell from the photo. In this field we simply threw the weeds onto the ground. 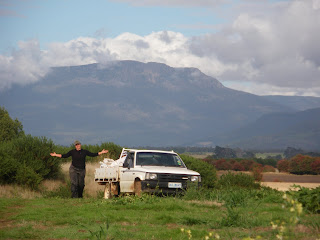 That was in February 2010, then in March 2010 we were driven in the Work Direct Minibus from Devonport down to a place in Bishopsbourne, near Carrick. This was a drive of over 1 hour, which worked out OK, as we could sleep on the bus to work and back, and also get paid for half of each journey – an hour extra pay every day was well worth it to do the weeding. 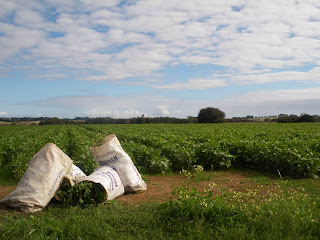 There were two massive fields there, and I spent a total of 5 days in them to finish the job off for the farmer, a guy named Peter. The farm was Hormead Farm (ironically a month later I would end up living very close by in the mountain village of Poatina). 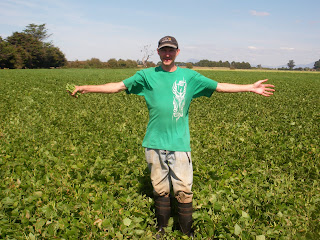 The fields we had to weed were all bean fields again. The bean harvester cannot have too many weeds when harvesting the crops, so it was our job to remove the weeds. 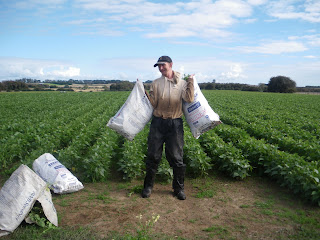 Each day we had a different amount of people working on the weeding, by the last day there was just four of us (myself, Marina, Daniel and Debbie) to finally finish off the job. At Hormead there were many different types of weed. For some reason some of them are called “fat hens” and they came out quite easily, the other weeds were tougher and with tangled roots in amongst the beans, so they took a bit more work. 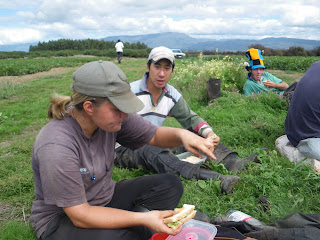 We weeded out the fat hens, radish weeds, nettles and many other types of weed. Some of them looked like mini bean plants, some of them were daisies on the top, and some of the bean plants themselves had turned into weeds. Most of the days I had my iPod on and just worked away in the Tasmanian sun. It was warm every day we did weeding. 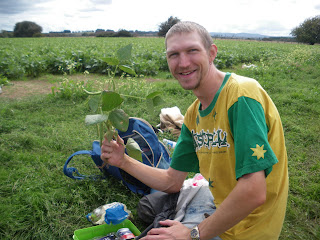 We’d get a morning break, a full 30 minute lunch and an afternoon break. We would choose a certain number of rows each and just work our way down as a team weeding out everything, leaving only the bean plants, ready for harvesting a few days later. 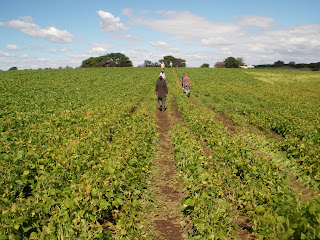 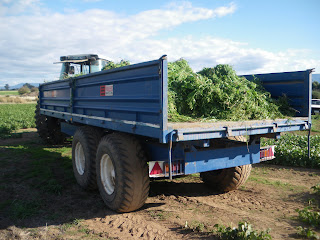 We’d fill over a full trailer load each day. It was pretty hard work on the back and in the sun was even worse. Sun cream was needed. Sweat was dripping down. 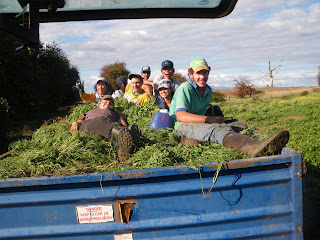 But filling up sacks with weeds was just another job for me and another experience in life. We finished off the second field at Peter’s farm in Hormead (although we left part of it which had more weeds than beans, and would have been pointless to weed!) and headed back to Devonport. 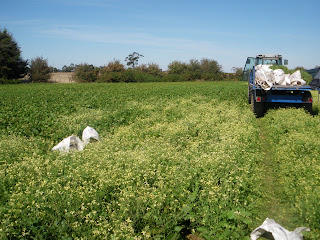 Going back onto broccoli harvesting the day after was like having a day off compared to the bending down and monotonous boredom of weeding. At the start of may 2010, I was suddenly back in Bishopsbourne again doing weeding! 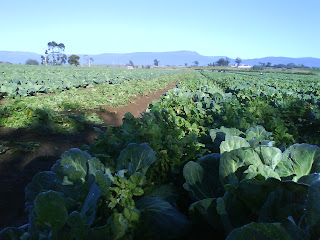 We were told it was a one day job. We started on a cold and frosty morning. It was a massive cabbage field, and we had to remove all the weeds. At one point it took us 3 hours just to do one row each. So we ended up back there for another two days! This turned out to be a break from my days cutting cauliflower, the next type of vegetable I harvested on. 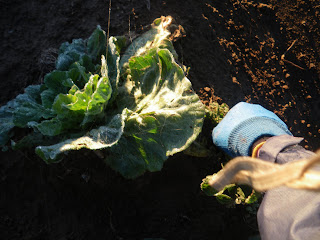 Still I did it, I enjoyed it, I will cherish the memories and the $700 or so I earned doing weeding will pay for some of my future travels. 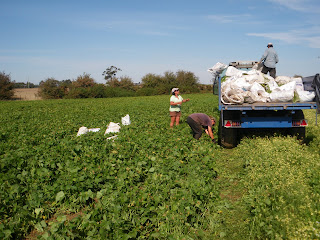 I’ll know I’ve earned it, or “bloody earned it”, as Northern Ireland footballer Alan McDonald correctly professed at a hostile Wembley Stadium back in 1985, the night an inspired performance made sure that little Northern Ireland would qualify for the 1986 World Cup Finals in Mexico.
Where I did Weeding – A bean field in Wesley Vale (weeding out potato plants mainly), Two different bean fields at Hormead Farm in Bishopsbourne, near Carrick and Launceston (weeding out ‘Fat Hen’ and ‘Radish’ mainly), A cabbage field in Bishopsbourne, near Carrick and Launceston (weeding out ‘Radish’ mainly)
Nationalities Worked With – Australian, German, Taiwanese, Hong Kongese, English, Italian, Canadian, French
Types of Weed I Weeded – Fat Hen, Radish, Potato Plants, Nettles, Many Others! 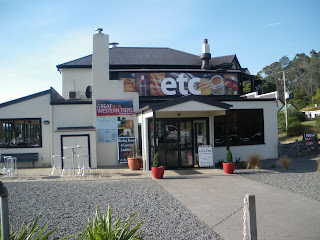 Stop Off On The Way Home At – etc. Elizabeth Town Coffee Shop for an excellent Earl Grey Tea
Transport Used – Trailer, Tractor, Work Direct Minibus, Debbie’s Car
When I Did Weeding – February and March 2010. Then in May 2010.
Hourly Rate of Pay – $17.89
Key Song (Hardly) – Sting – Fields of Gold
VIDEO OF WEEDING OUT POTATO PLANTS IN WESLEY VALE:
VIDEO ON THE BACK OF THE TRAILER AFTER A HARD DAY OF WEEDING IN BISHOPSBOURNE:
VIDEO OF THE CABBAGE FIELD IN BISHOPSBOURNE:
ALAN McDONALD SPEECH, WEMBLEY 1985:
Join 15,017 Monthly Readers! If you enjoyed this article and LOVE travel and SAVING money, get e-mail updates from Don’t Stop Living – a lifestyle of travel! (It’s Free) 😉 Jonny

2 thoughts on “Weeding in Wesley Vale and Bishopsbourne”