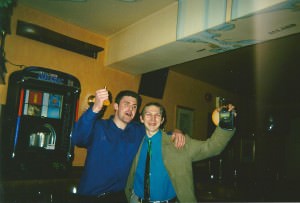 It wasn’t until 2001 that I first worked in a bar (probably by then I had spent enough time on the other side of the bar). I got the job through my good mate (at the time) Darren Latimer. I was employed mainly as a barman on the downstairs bar at McMillen’s Bar, Bangor. The bar is on a corner and actually quite a prominent position, overlooking Bangor Marina and pier. Bangor is the middle class Protestant dormitory town where I grew up (or didn’t, more likely). The bar had live Sky Sports with football always on. The first time I ever had a pint in that bar I was 17 and the bar was known as The Steamer at the time. It was owned by local publican Sam Allen, who was also a Glentoran fan. By the time I worked in the bar, it had been taken over by Kevin and Susan McMillen, and re-named McMillen’s. There were basically four parts to the bar. There was the downstairs bar which was open from 11 am till 11 pm (or 1 am at weekends) every day. Then there was the upstairs restaurant which had a full bar, and full menus twice a day. They did lunch and high tea. Then there was the nightclub, which held private functions and parties and was otherwise open three times a week: 1. Friday nights as a nightclub for over 25s. 2. Saturday afternoons for live Premiership football. 3. Saturday nights as a nightclub for over 25s. Those were the three parts of McMillens which I worked in. Then was the upstairs bit of the restaurant which we only opened when it was really busy. There was a fucking good view of Bangor Marina and Pier from there. Staff lunches and dinners we would eat up there – these were always quality food, which is a huge advantage of working in bars and restaurants.


I remember starting one busy Saturday when there was live football on upstairs and I worked with Gareth on the bar. I distinctly remember the price of pints as well. Harp, Carlsberg and Smithwicks were all £1.50 during live sports. Yes, astonishing really when you consider the price of drink the day! The normal price was £1.75, with Guinness, Stella and Blackthorn I think being £2.05. Those were the fucking days, when ye could get pissed for less than £20. No chance of that now. I thought I would be good at bar work as I was used to drinking and generally being friendly and sociable. The first few days I remember not actually enjoying it that much, not sure why. I worked in the restaurant a bit of that, and it was probably the waitering I didn’t enjoy. I’ve always enjoyed being a barman (and even now, aged 28 I still am one!). I also didn’t like the chef, Jim. He was a bit rude to be honest, as chef’s are but he used to take the piss. I’m sure people like that learn their lessons through life, at least I hope. He got totally pissed off with me spilling chips on a customer when even myself and the customer found it hilarious! For the record, I didn’t deliberately drop the chips! I’m not sure how he got so upset and frustrated with the staff. I confused a fillet steak with a sirloin steak also one night, but later working in butchery (2002 – 2003) I realised this was a ridiculous mistake to make!! So I was mainly a bar man on the downstairs bar, with the odd time doing the nightclub and the odd time doing the restaurant, where at least we did earn tips to make up for having to deal with Jim all the time.


The owners Kevin and Susan were also great people. Kevin used to sit and drink at the bar on his nights off. We also got plenty of regulars during the day. My shifts would normally be 6 shifts per week, normally:


This worked pretty well with social life and other commitments at the time, and if the football was on I could watch it in work while I poured pints. I actually really enjoyed it. Working with my mate Darren was also good craic, but I think he left shortly after I started. It was also good to learn how to pour the perfect pint of Guinness. 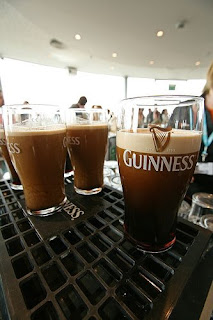 When I left McMillens it was to join the Halifax bank in Belfast (another blog post on that as well). I didn’t feel glad to leave, but I did it because I was getting more money and doing something different, again. After that Susan called me up a few times to get me in for a few more shifts in late 2001 and I remember working St. Patrick’s Day in 2002 for cash in hand. I also called into the bar on Christmas Eve 2001 after I had left, and when the bar got busy, naturally I jumped behind and was allowed to serve everyone to earn a few free drinks after work. Working in bars in Bangor you get to know everyone in the other bars at the time, it’s a very close knit thing. My brother Marko worked in Calico Jacks, Marine Court Hotel, Lord Nelson’s and Mocha (all essentially the same thing) as well. Social nights would be with other bar staff from McMillens, or just the other bars such as The Royal, The Windsor, Lord nelson’s, Rose and Chandlers and Wolsey’s. Kevin and Susan rarely did lock ins, but when they did we would have a good night. I used to drive to work much too often and didn’t always enjoy the privilege of getting pissed up.


Since my last shift in there in 2002, I bizarrely haven’t been back in, 6 years on! I find that hard to believe actually. Kevin and Susan sold the pub shortly after I left, and it was re-opened and re-branded as The First Port for a while. The bar has since been painted black (it was pink as The Steamer; and yellow as McMillen’s when I worked there) and re-named The Black Boat, the fourth different name in less than a decade for the bar. It is also now friendly to Northern Ireland, Celtic and Rangers football shirts, which shows the changing times in Northern Ireland. There are no fights over this. People need to live as one. Bangor is largely Protestant and Northern Ireland shirts should always be allowed in my opinion, I don’t understand why they’re not. I could get into the top nightclubs in Toronto, New York and Bournemouth wearing a Northern Ireland shirt, why not in Bangor, eh?! So anyhow, here’s to McMillen’s Bar for starting my time as a barman, and I’ll be sure to pop into the bar sometime again to relive the pouring of Guinness pints in what now survives as The Black Boat.


Nationalities I served – English and Northern Irish (Trust me – that was it!).


People I worked with – Susie and Kevin McMillen, Darren Latimer, Joanna, Claire, Mark, Johnny McMillen, Bart, Ivan. I can’t seem to remember everyone, though I was only there for a very short while.