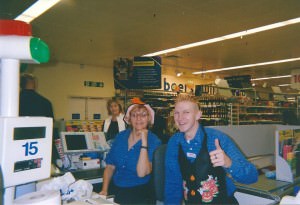 Working Wednesdays: Working with Megan on the tills at Tesco Branksome Poole, England in 2004

I was recently thinking about my job history, including all the unpaid work, the work I have done for friends, the work I have done for others on top of my 50 plus jobs where I’ve been earning money around the world. It astounds even me, as until recently I didn’t actually realise how many different jobs I have had over the years! So I wrote a list of actual jobs or job related stories I could write and got into the hundreds…anyway today’s working Wednesdays however comes from the suburb of Branksome, on the edge of Poole in England. I actually spent 2 and a half years working there on and off, and always on a part time basis on top of 3 other jobs, my studies and my mega social commitments and ventures round Europe. I’m going back to the period from October 2003 to June 2006. I worked as a front end cashier or till clerk for the massive English supermarket chain Tesco!

Where did I work?

I worked in a 24 hour Tesco supermarket in Branksome, Poole in England. It was open 24 hour for petrol and conveniences and the main store itself also had loads of 24 hour opening days. Except Sundays were short. I think we opened 10am – 4pm in those days.

What hours did I work?

I was part time and I had set contract hours. I luckily managed to get Monday and Tuesday afternoons and Wednesday nights as my three shifts. These were EVERY week at the same times, for over two years. However I could get shifts covered or swapped when I needed them (which was usually for football or travel!). I also worked as many Sundays as I could as it was double pay. I’d say I averaged around 12 – 15 hours per week working there on top of my other jobs, studies etc. so this was a handy boost for me. I worked longer hours at Christmas as the shop was busier.

What was the rate of pay?

I’d have to check my payslips for that one. But It was somewhere between £5.50 to £6.50 per hour. Plus double rate on bank holidays and Sundays!

What bonuses did I get?

10% off ALL my shopping and double Clubcard points on all my petrol!! I milked this big time. I did all my shopping there and had a car at the time so filled it up with petrol. The discount included alcohol, but not petrol, stamps or tobacco. It was a staff card called a Tesco Privilege Card but you had to work there for one year to get it, so I got over a year and a half use out of it. 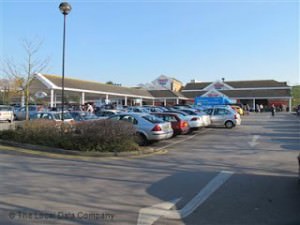 Where I once worked!! Tesco Branksome Poole, England!

What did the job entail?

For 90% of the time I was sat on a swivel chair on the tills, scanning groceries and charging people for them. It’s fair to say it got fairly boring at times so I used to just chat a lot of crap to my customers making them laugh. Zoe Oakley, my work mate and friend used to find it funny. Not sure if anyone else did. If I served you in Tesco Branksome from 2003 – 2006 I was trying to bring a bit of comedy to a fairly mundane job. Yes I was the one with the Northern Irish accent. 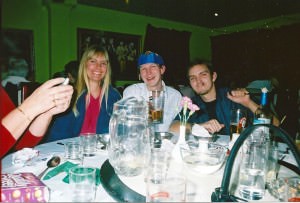 Back in the day!! Staff Party at Tesco Branksome Poole 2004 in a Cantonese Restaurant in Parkstone.

Any romance with the job?

Like most of my jobs I’ve had there were plenty of girls to flirt with and yes the willy got some use out of working on the tills of Tesco!! Perhaps a story for my recent line of crazy stories at some point. Though there were a hat-trick of girls I chased who I never got to “play with”. For old times sake and to name drop them: Emma Geraghty, Charlotte Marsh and Justine (can’t remember her surname) turned me down surely limiting and hindering their lack of adventure in days gone by…oh ladies it wasn’t to be…you never got your travelling Northern Irishman 😉

In fact in my two and a half years working there the staff parties were hardly anything to write home about. I wrote home regularly in those days in fact and didn’t mention Tesco staff nights out that much. I used to enjoy drinks with my co-workers Conan, Gemma and Zoe. It was a different type of crowd, a lot more work and family focused than worldly and adventurous. Though I did have fond memories meeting Natallia from Belarus and Sun from South Korea. They helped increase my appetite for travel as I scanned products through the tills. My destiny clearly never lay in working in a local supermarket!! 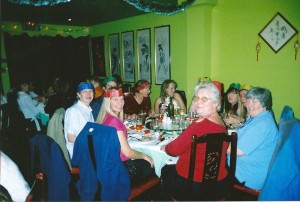 Any celebrities that passed through my tills?

Yes! Lots – this was near the Sandbanks part of Poole and I had Max Bygraves, Harry Redknapp, Louise Redknapp, James Hayter and Brian Stock all pass through my tills. Had to look twice when Max Bygraves handed me his credit card to pay. Just checking it’s really you I said!

Where is Tesco Branksome Poole England?!

It’s on Poole Road in Branksome, so it’s just inside the town boundary of Poole in the English county of Dorset. I actually lived in a few places while working there (nomadic even then – never stayed long in the same flat), including Wallisdown, Ensbury Park, Bournemouth Town Centre and Springbourne. It’s on England’s south coast so it has a fantastic coastline.

What was my favourite till to work on?

The one at the end. More peace, more freedom and I could plan my next adventures on the back of Tesco till receipts.

Who Did I work with? 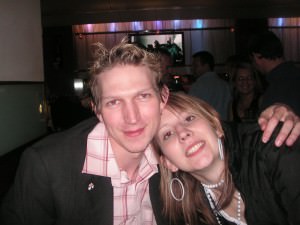 On a night out with my friend Zoe Oakley, who I worked with in Tesco Branksome, Poole in England.

When and why did I leave?

Despite twice handing in my resignation (once in 2004 and once in early 2006), I didn’t actually leave until June 2006. I quit both my jobs in Bournemouth/Poole simultaneously so I could move to London and try living and working in the big smoke for a while. It was that job in London (doing PR for companies like Apple, Sonos, Iomega etc.) that made me even more eager to get out there and see the world! And a year later I launched the website you are now reading!! Don’t Stop Living – a lifestyle of travel.

If you worked with me in Tesco Branksome in days gone by, thanks for the memories. It was just another job in my coloured past. I’m pretty glad I’m now a travel writer and blogger!! Safe travels and happy Working Wednesdays guys!