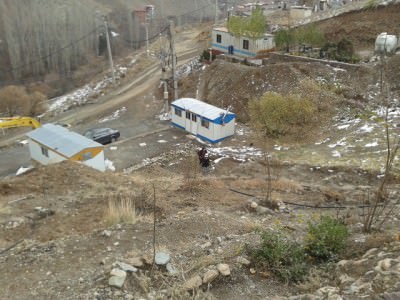 Anyone who has travelled in Iran will tell you that you always get offers to stay with families and live with them. This happened to us a load of times, and we ended up in three family houses over the course of a month and it could have been more. Two of our host families invited us to stay overnight and cooked for us and we loved it. There was nothing really we could do in return, I felt. Just being there made these families happy it seemed. 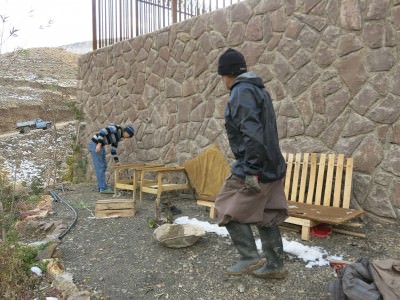 Doing a spot of “work” at Zarad Band in Iran.

Neither my girlfriend Panny nor I will ever forget the hospitality shown to us by Issa and Fatih, our first host family in Iran. We met Issa on the metro system in Tehran and he invited us to stay with him. He lived in this incredible skyscraper in the Kousar Estate in Sohank on the edge of Tehran, on the north east part. 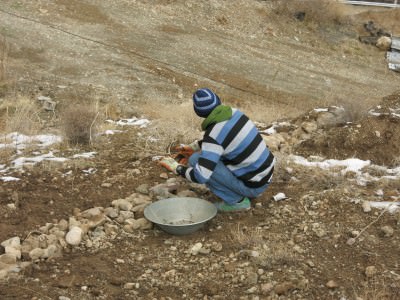 Out in the northern wilderness of Iran, moving rocks to make a wall.

We spent 2 days there and one night (wanted to stay more but we had a huge desire to see the country so moved on). But why is this a working Wednesday? Only because on the last morning, Issa and Fatih drove us our to their allotment even further north and way out in the countryside. In an area apparently known in English as Zarad Band. 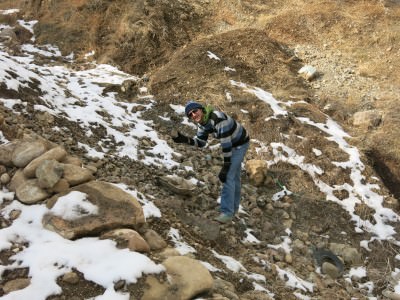 Working Wednesdays: Trying to help out in Iran.

When I saw the views from this place I was truly inspired. It was an amazing place, so remote and so raw. They owned this plot of land as well as their flat and a small place on the Caspian Sea. Issa was a hard working man and his work had paid off and it was clear that his two daughters and son were living a very happy life. Issa had earned enough money for his family to enjoy the life. So I thought I had to help out when we reached this plot of land. 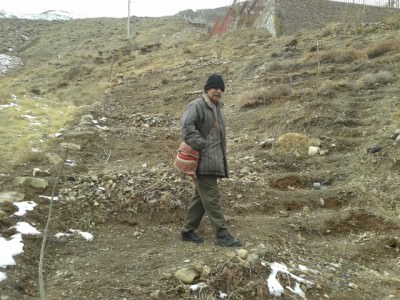 Issa on his plot of land at Zarad Band, Iran.

It’s a bit loose to call this even “working but in Iran”, it was nice to be out in this remote countryside enjoying the nature and doing a bit of casual, easy work. It was moving stones to make a wall for about half an hour!! 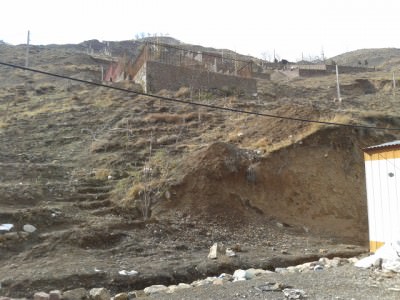 Issa and Fatih’s amazing allotment which is in a place called Zarad Band, north of Tehran in Iran.

It was cold enough, so I put on some gloves and we used massive bowls to carry rocks from this hill over to the wall that Issa was building. For sure Issa is working on a new plan for this piece of land. He wants to grow vegetables and maybe even build a small hut or building here. For the meantime, he’s making a wall, planting some trees and enjoying his retirement. 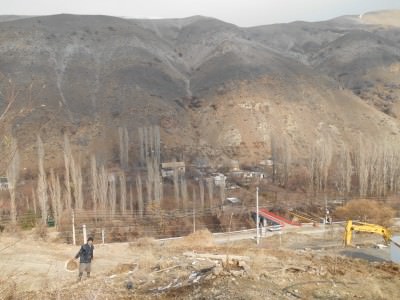 Issa on his land in the countryside.

If we had stayed around with Issa for longer, I’d have helped him a lot more than I did. I’d have been out there on the plot of land each day. A few oranges and a cup of coffee and helping to build his home away from home. 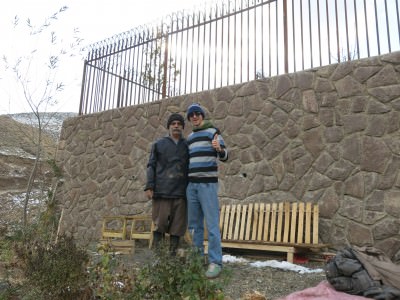 Issa and I on his plot of land in the wonderful area known as Zarad Band.

I will hope to write about our home stay with Issa and Fatih at some point, but I just wanted to share this story of our visit to his allotment. These were good days. Thanks to Issa and Fatih for being such great, welcoming hosts to us in Iran. We loved it!

A few videos from Zarad Band including an interview with Issa about his plot of land: