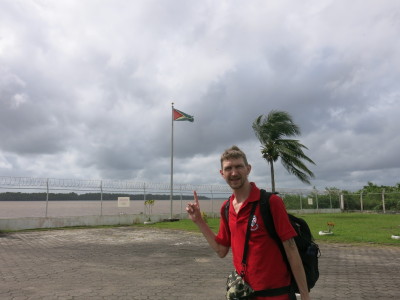 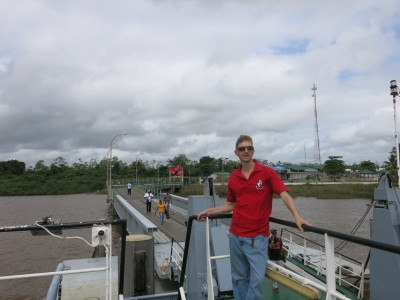 World Borders: How to get from Guyana to Suriname by ferry

While staying in Georgetown we based ourselves in Rima’s Guesthouse as well as visiting the stunning Kaieteur Falls and a trip out to the Sloth Island resort via Bartica and Parika so it was a fun busy time in the country. Guyana was full of crazy surprises! 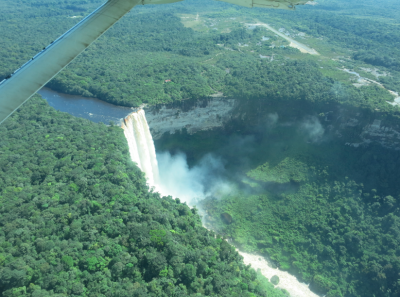 View of Kaieteur Falls, Guyana from our flight

I had also finally completed my “hat-trick of the Guyanas” by visiting Guyana itself – the former British colony once known as British Guyana, now simply Guyana. I crossed to all the Guyanas overland and have previously shared my advice on getting from Brazil to French Guyana and from French Guyana to Suriname and then again from Suriname into Guyana. This time it’s how to get from Guyana into Suriname. 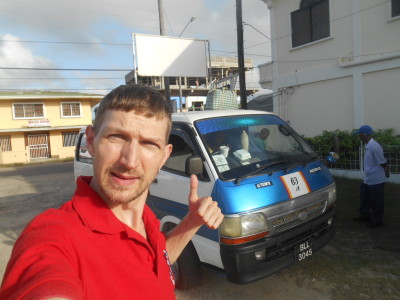 Bus from Guyana to Suriname

Georgetown to Corriverton to Moleson Creek, Guyana
Most people crossing from Guyana into Suriname you will end up starting in Georgetown and going all the way to Paramaribo, Suriname’s eclectic capital city. On “public” transport, the common option is to book with either Bobby’s Minibus or with Johnny’s Bus and Taxi. Both services offer the same thing – the most common journey being to just go direct from Georgetown to Paramaribo. Other options are few and far between except for hiring cars, hitch hiking and having friends drive you. 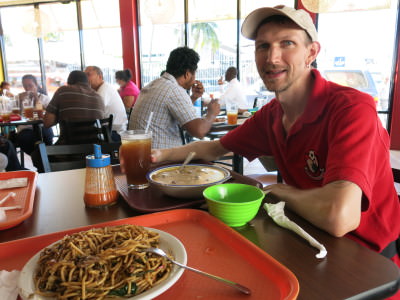 We decided to pick this option for speed and ease and booked with Johnny’s bus and taxi. Your guesthouse should know the contacts numbers for these places, as of July 2014 Johnny’s taxi is number 08652080 or 08805210. Johnny’s taxi can be paid in Guyana Dollars, US Dollars or Surinamese Dollars and the price was $30 US (in July 2014). 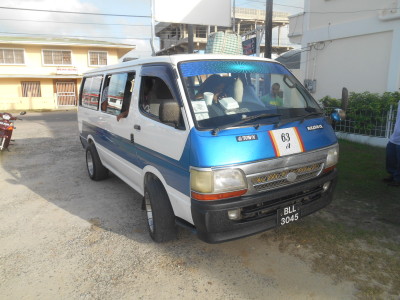 Our minibus from Rima Guesthouse in Guyana to Suriname

To start with, Johnny’s taxi service will pick you up from where you are staying in Georgetown. We stayed at the Rima Guesthouse and Johnny’s driver turned up at 5.15 am to pick us up. It’s always an early start leaving Georgetown as you need to be at the border to catch the once daily ferry to Suriname (or twice daily, depending on season we heard). We set our alarms for 4.45 am and had packed the night before. Johnny was there at 5.15 am, with 2 other passengers. It was dark and we headed on the road towards Moleson Creek. 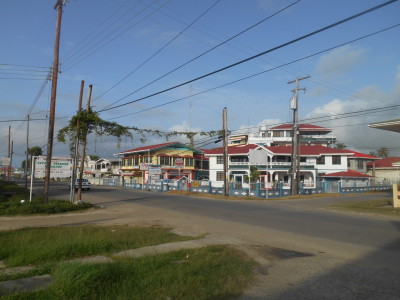 We stopped off around 8.30am at Corriverton for a breakfast in a cheap local cafe called The Village Club. I spent the last of my Guyanese Dollars on an egg roll and a cup of coffee here. After Corriverton, we head straight to the ferry terminal at Moleson Creek. 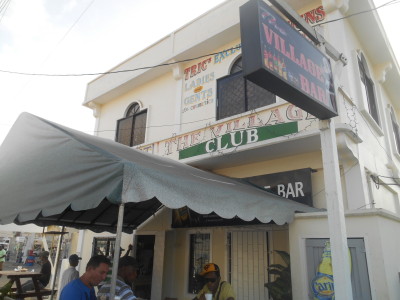 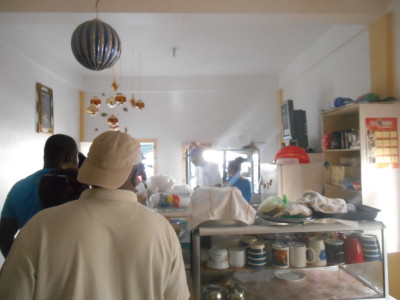 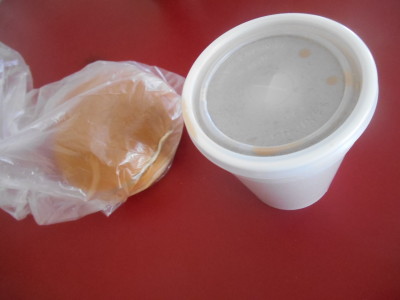 Along the way, our driver gives us a ticket that confirms that a minibus/car will collect us on the other side of the river, in South Drain, Suriname. It is important you keep this ticket, which looks like this… 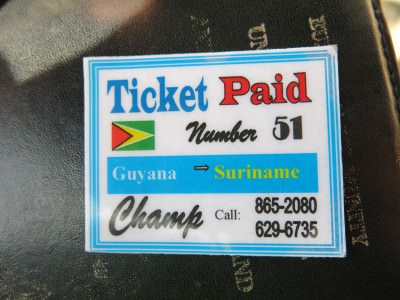 Ticket from Guyana to Suriname.

Leaving Guyana at Moleson Creek
There is apparently only one ferry a day at 12.30 pm, though we heard that sometimes there are 2 ferries. Ours was leaving at 12.30 pm and we got there around 11am so we could get all our immigration checks done in advance. 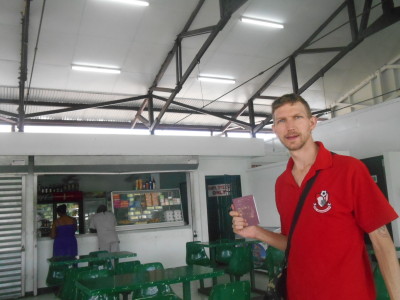 There is no charge to leave the country of Guyana on a British, Irish or Hong Kong passport. You will need proof of a Suriname Visa, a ferry ticket and you will be given an exit stamp for Guyana. You are not allowed into the ferry terminal unless you have a ticket – you can pay 100 GD for a visitors ticket if you need to. 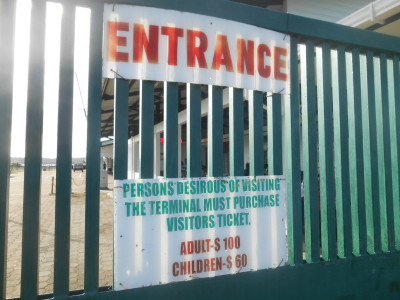 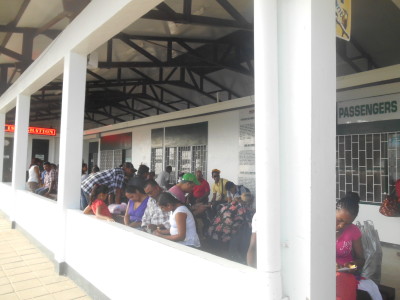 To buy your ferry ticket you also need to show your passport. The ferry ticket is an extra you pay yourself and is NOT included in Johnny’s “Taxi service” which takes you by minibus on the roads. A return only costs 136 Suriname Dollars for 2 passengers, so we went for that – it’s an open return as long as you go back within 30 days. So 68 Suriname Dollars per person for the return, working out at 34 Suriname Dollars one way. You can pay in Guyanese Dollars or Surinamese Dollars. US Dollars will also probably be accepted at a push, or at least you can exchange them at the terminal. 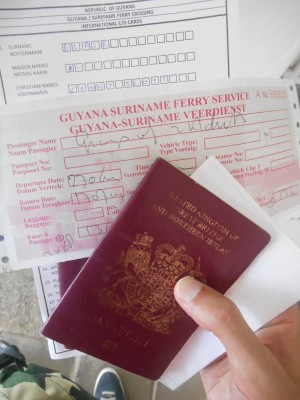 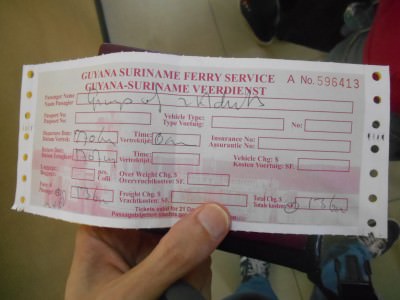 Our ferry ticket from Suriname to Guyana.

After the passport stamping you go to a waiting lounge for the ferry – Suriname is one hour ahead of Guyana so if you carry watches and phones you can move it one hour forward while you wait. 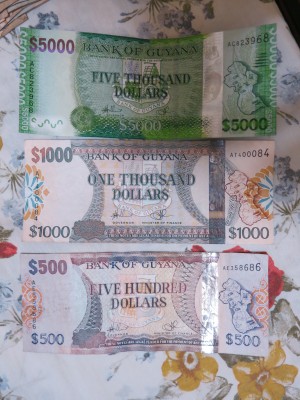 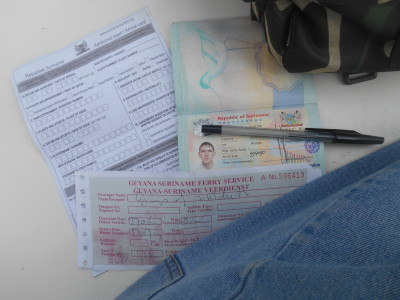 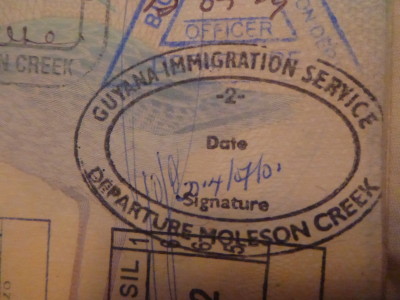 Boarding the Canaima Ferry at Moleson Creek, Guyana
Then it’s time to wait for the ferry to offload and board the ferry bound for Suriname. The ferry takes vehicles and people. It reminded me of the Portaferry to Strangford ferries in Northern Ireland and the ferry to Bruny Island in Tasmania. As foot passengers, you just walk along the ramp and onto the ferry. It is much much busier than the French Guyana to Suriname crossing (where we were the only two people crossing that time). 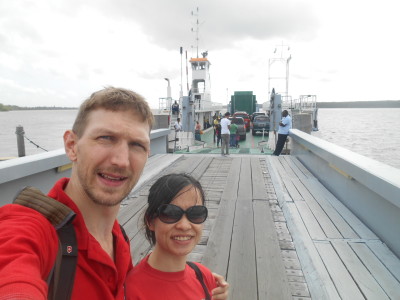 Walking along the ramp onto the ferry 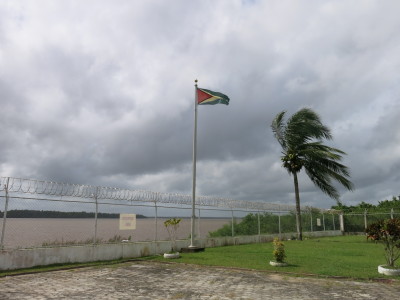 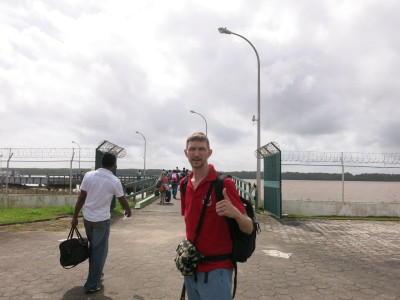 You are given your Suriname arrival immigration forms before getting on the ferry. You can fill these in during the crossing. They are very simple and straight forward – I won’t go into the process in detail (are you carrying drugs, have you been banned from Guyana before etc.). Here is what the forms look like. 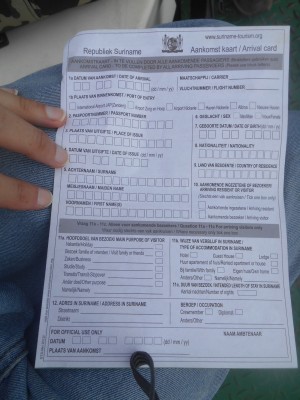 Crossing the river into Suriname
It’s a pleasant calm and relaxing journey. Enjoy the views, sit down and fill in your immigration forms. I cannot remember the exact time the ferry takes, but around half an hour I think. Panny and I seemed to be the only two backpackers, though the boat had a mix of black and white people so it was hard to tell if any of them were locals or foreigners. Chilling out on the ferry from Guyana to Suriname. Arrival in Suriname at South Drain.

Despite the fact that the terminal is called South Drain, your passport stamp will say Neuiw Nickerie on it, as that’s the nearest town of entry into the Republic of Suriname. 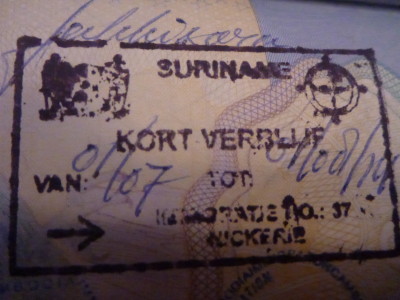 You should head back out of the terminal to your driver and back to your mini-bus. Your clock should now be set to one hour ahead. Also there is a bit of nature around for bird lovers. As we waited for some passengers, we caught some photos of birds. 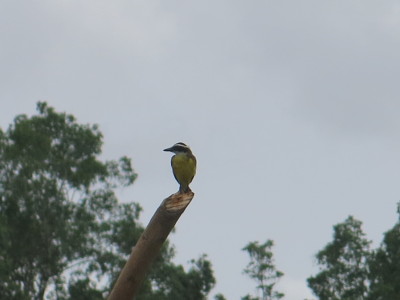 A bird at the Suriname to Guyana border.

South Drain to Paramaribo
We boarded back into Johnny’s taxi and headed straight for Paramaribo. The roads are bumpy in parts but mostly it’s a chilled out journey. We stopped off at Caledonia for a quick bite to eat and I grabbed a beer. We arrived in Paramaribo mid afternoon, meaning the whole journey from Georgetown had taken around 10 hours (including the 1 hour time difference). 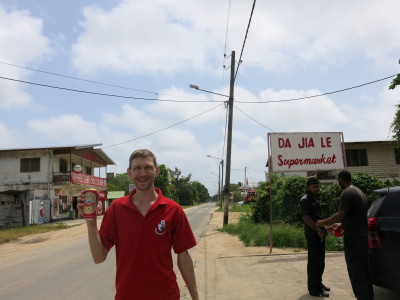 A beer on route back to Suriname

Not too bad when you consider the wait for the ferry and immigration on both sides. Once we arrived in Paramaribo, we were staying in the Guesthouse Amice. I wrote about my impressions of Paramaribo ages ago on my first visit, but we also toured the Sugar Cane plantations and I enjoyed the Sunday Morning Tweety Fest.

Here are my videos documenting how to get from Guyana to Suriname:

14 thoughts on “World Borders: How to Get From Guyana to Suriname (Ferry from Moleson Creek to South Drain)”