You’ve got to love connecting with other travellers and bloggers as everyone has their own story. Time for Polish girl Agness from eTramping (also run by Cez) to tell us all about how she escaped the town of Zagan to travel the world…but with one slight twist before we read her story… 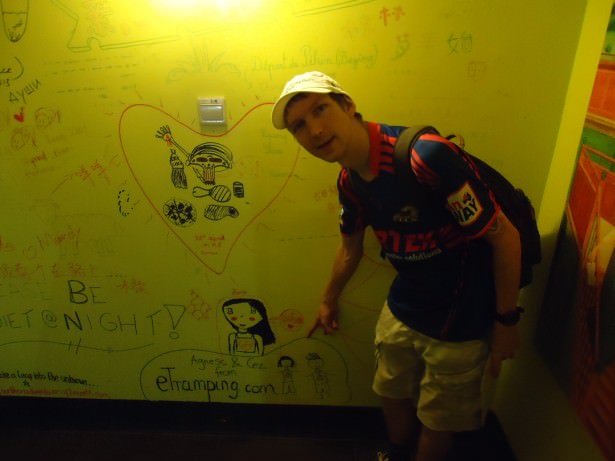 Agness and Cez from eTramping signed the wall in the hostel I stayed in recently in Guilin! Small world (that’s me by the way!)

So I was backpacking in Guilin, China a few weeks back and I checked into the Ming Palace International Hostel in Guilin. As I walked up the stairs to find my room, I noticed the wall was covered in graffiti from people who have stayed there – the first one I saw was from Agness and Cez for e-Tramping!! Amazing coincidence as just a few days earlier I had posted on their site this article! I got a photo beside their signature! Small world, anyway over to Agness… 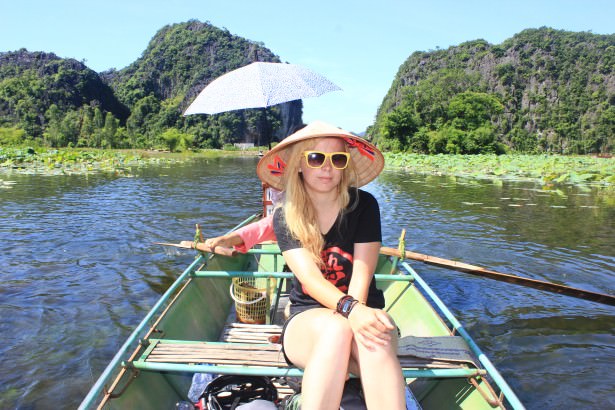 World Travellers: Agness from eTramping on a boat ride in Ninh Binh, Vietnam.

My name is Agness. In very simple words, I would describe myself as a traveler, backpacker, dreamer, life enthusiast and photography passionate. I have been travelling the world since August 2011 living and working in many different countries in Asia.

I am originally from Poland, a small town called Zagan. 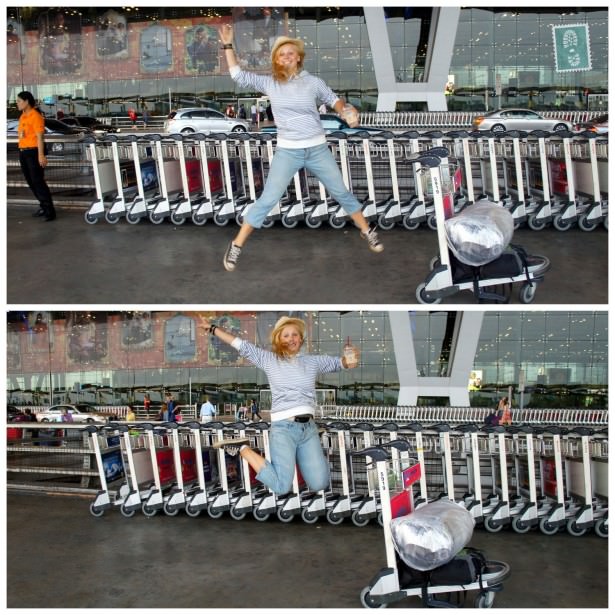 I started my travel adventures from short backpacking trips across Europe (Poland, England, Wales, Spain, Norway, Italy, etc.). In August 2011, after I graduated from the university, I decided to move to China for a year where I was teaching English and travelling around. After China, I took over Cambodia, Thailand, Sri Lanka, Macau, Hong Kong, Tibet, and cycled the full length of Vietnam in less than two months. 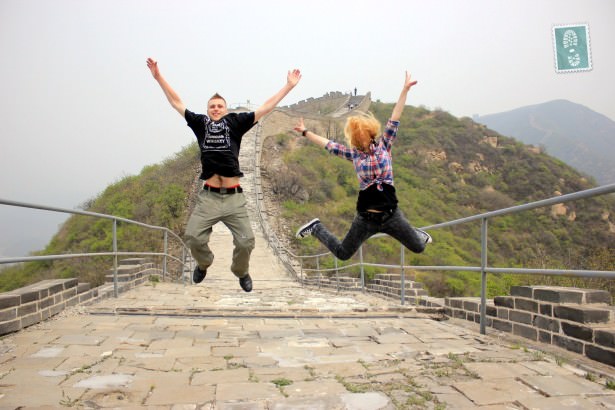 World Travellers: Agness from eTramping at The Great Wall of China.

Right now I am living in Dongguan, China where I am working as a kindergarten teacher travelling across various Chinese provinces on my days off.

My top 3 places are Lhasa – the capital city of Tibet where I met incredibly hospitable and religious people. I fell in love with its scenery, Tibetan religion and culture. I call this place “My heaven on Earth”. I was blown away by the power of Buddhism and the design of Tibetan temples and houses as well. Right after is China which I call my second home. Here my whole solo backpacking adventure started and finally Sri Lanka where I got the chance to touch elephants and try some spicy food. 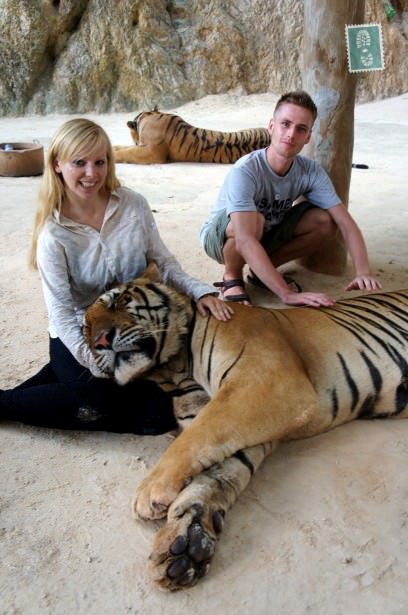 World Travellers: Agness from eTramping with a tiger in Thailand.

There were actually a few best travel moments I had in my life. However, the best one was travelling by train from Chongqing (China) to Lhasa (the capital city of Tibet) by train with my best friend – Cez. We spent 46 hours on the train having a blast with locals and taking a lot of photos of breath-taking scenery. This is something I will never forget. We looked out of the window and saw the Himalayas for the first time.

My worst travel experience so far happened during my stay in China when I was bitten by a toxic spider. My whole neck and face were infected and it took me a long time to recover (about two months as far as I remember). I was pretty scared and looked like a monster. Although I was in pain and looked hopeless, I didn’t stop travelling. During my recovery, I managed to visit Shanghai, Xi’an and Hong Kong :). 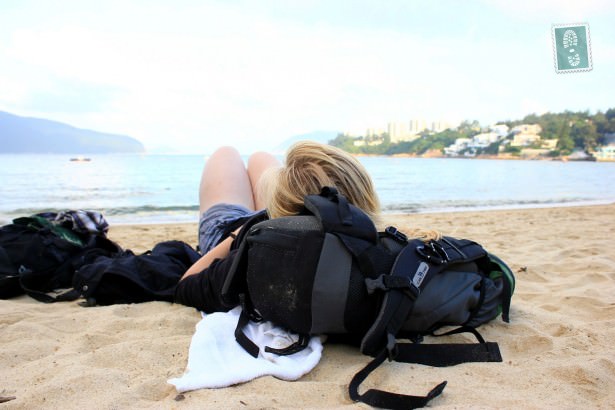 Cycling the full length of Vietnam last summer was a blast. Although the weather was dreadful (it was extremely hot), we were sweating like pigs and we were incredibly tired, but we couldn’t stop making jokes with locals! We crushed our bikes not once, but many times which was hilarious. 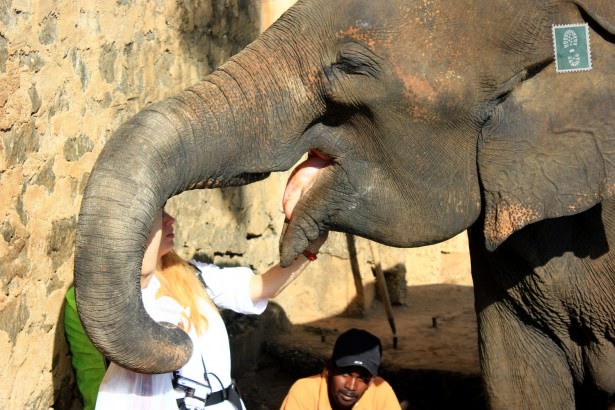 World Travellers: Agness from eTramping with an elephant in Sri Lanka.

I was scared when Cez was diagnosed with a dengue fever while we were living in Siem Reap, Cambodia. He felt sick and couldn’t get out of bed one morning so we went to the hospital. He was in such a pain and we didn’t know if he could make it or not. Those 7 days were the longest and the scariest ones. Lucky, after a few days he started getting well and the muscle pain disappeared.

After nearly 4 months of travelling in Tibet, Hong Kong and cycling the length of Vietnam, we decided to settle down in Cambodia and we struggled with money. It was was back in 2012. With not much cash left and limited credit cards we decided to set up our own local web design business in Siem Reap. As it turned out later on, it was a great idea and we managed to get some serious Khmer customers (mainly tuk-tuk drivers, restaurants and bars owners) , earned some cash to pay our debts and carry on tramping the rest of Asia. I had a great time working as a web designer and social media specialist :). 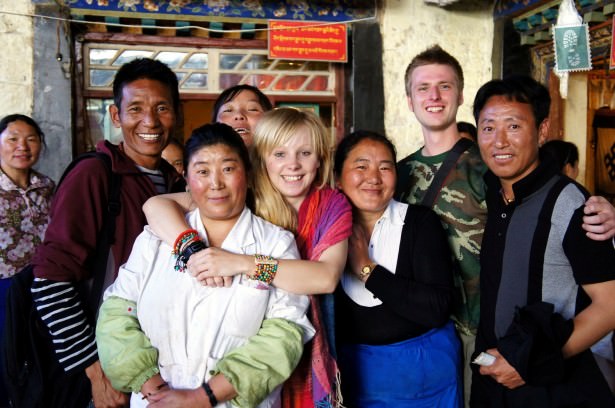 World Travellers: Agness from eTramping in Lhasa in Tibet.

Unfortunately I am not rich and I don’t get any financial support from anyone and we never had any possessions we could sell to travel the world either. How do I fund my adventures across the globe then? It’s simple – I work my a*s off in every country I travel to. I worked and am still working as a full-time English teacher in China, I was a web designer, photographer and social media specialist in Cambodia and who knows what else I can do in the future! Moreover, I don’t spend much on my travels and follow my under $25 per day budget plan. So far it’s been working well :). 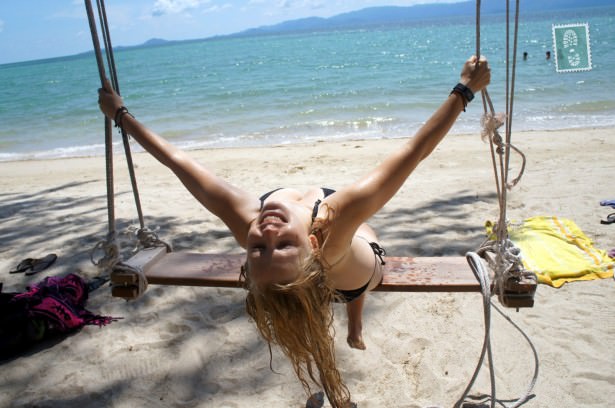 It’s very simple. Open your heart for locals, open your eyes for the scenery and open your mouth for the food and you will love every second of it!

I am heading to Europe in August for a month to catch up with our friends and family from Poland, Holland and Belgium. After that, I am planning to take South America from the south to the north, maybe on bikes – who knows :). Agness is a Polish vagabond who, after graduation, left her comfort zone and set off for a journey of her lifetime. She has been constantly travelling the world since her first flight to China in 2011 (slowly, but surely as she says), living like a local for less than $25 a day. She became a passionate photographer and adventure blogger sharing her life enthusiasm and travel experience with everyone around. You can follow her adventures on her (and her best friend’s) blog – eTramping – or find her on Twitter and Facebook.

Thanks to Agness from eTramping for being the latest in my series of World Travellers! If you travel the world and run a travel blog or are a travel writer, please get in touch, you can be featured (there’s a waiting list at present), either e-mail jonny (at) dontstopliving (dot) net or head to my contacts page and get connected! You can also subscribe to Don’t Stop Living by filling in the form below! Safe travels!