In my latest World Travellers Interview I catch up with Anna Lysakowska who runs the travel blog Anna Everywhere. Anna is the second Polish lady to feature in this series, after I interviewed Agness from e-Tramping last year. 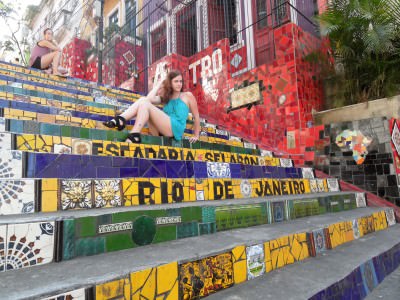 I’m originally from Poland. However, my nationality always confuses people.

That’s the question I always hated in job applications, because there was not enough space haha! So far I’ve been to 45 countries in 6 continents (I’m only missing Antarctica) and lived in the US, UK, Mexico, Netherlands, Argentina and South Africa.

I’m currently in the Netherlands. I’m working in Amsterdam, but I lived in Leiden with my boyfriend who produces music there (http://djphixion.bandcamp.com). Therefore Holland became a base for my trips at the moment. 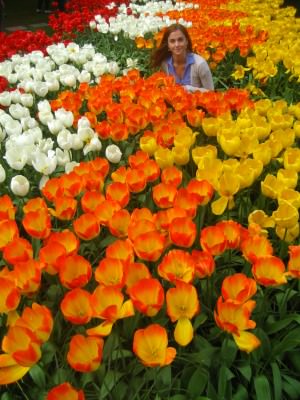 World Travellers: Anna hiding in the flower field of Keukenhof Garden in the Netherlands

South Africa – I could definitely live there forever. It has everything: good weather, nice beaches, wildlife, awesome food and nice people.

Galapagos Islands – I felt in love with culture, beautiful scenery and wildlife walking around everywhere.

Fiji islands – the most beautiful beaches I’ve ever seen.

I’d say my Ecuadorian trip. I went there without any expectations and I was absolutely stunned by what Ecuador has to offer. 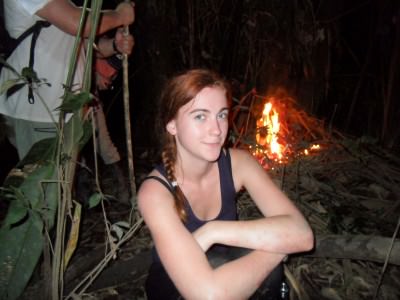 That would be more than just one, but when at the moment it’s scary, but later it’s just funny. My unsuccessful trip to Peru. I got stuck in Lima due to TACA airlines incompetence instead of going to Cuzco. Another time my guide in the Amazon lost us in the jungle, because it turned out he’s never been there before actually.

Probably when I moved to Mexico, still learning Spanish, and my friends taught some Spanish words that didn’t exist. Later I was talking to their friends using these words and they were laughing at me.

Definitely bungee jumping from Blaukrans Bridge in South Africa. Till the last moment I wasn’t sure if I should jump – I was terrified. In the end I jumped and it was the best thing I’ve done. 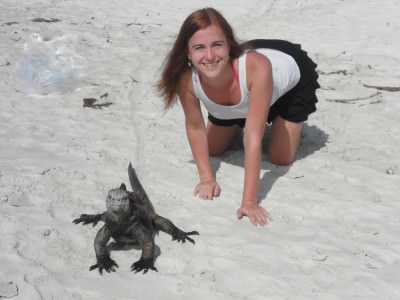 World Travellers: Anna on the Galapagos Islands in Ecuador.

I walked the lions (literally!) in Zimbabwe as a part of volunteering project. It was pretty amazing and actually not scary at all. Lions are like home kitties, just a bit bigger 😉 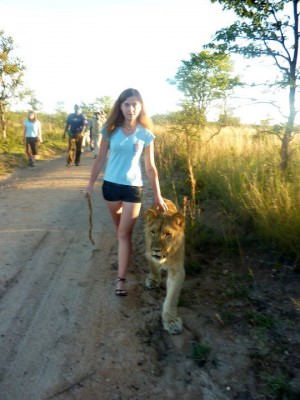 I’m always working. Whenever and wherever I can. I’m currently working for Flipit and aside doing freelance translations.

Don’t forget about the future – you might always settle for a bit (or forever) somewhere on the way, or simply come back home. Those things happen. Remember that you shouldn’t JUST travel, you need other source of finance.

Go to every place with an open mind. Don’t expect too much, but do your research about the place beforehand.

Don’t forget about friendships and stay in touch with people you met, friends back home and family. You can get lonely on the road.

I’m going to visit California again in May for sure. Later this year I’m going to head to the East – probably either Maldives, or Indonesia and somewhere in the Middle East.

Biography: Anna Lysakowska is a blogger, editor and translator. She has visited more than 45 countries and lived in 7, including Mexico City, Boston, London, Cape Town, Florence and Leiden. She studied journalism at Harvard, international law at Oxford Brookes and obtained her Masters in Latin American Studies from Leiden University. Since 2013 she has been residing in the Netherlands, but this doesn’t stop her from traveling.

Thanks to Anna for being the latest in my series of World Travellers! If you travel the world and run a travel blog or are a travel writer, please get in touch, you can be featured (there’s a HUGE waiting list at present), either e-mail jonny (at) dontstopliving (dot) net or head to my contacts page and get connected! You can also subscribe to Don’t Stop Living by filling in the form below! Safe travels!