Welcome to the first in a series of interviews with fellow World Travellers! Today we meet Ashley and Chris who run the website Almost Fearless Backpackers!! 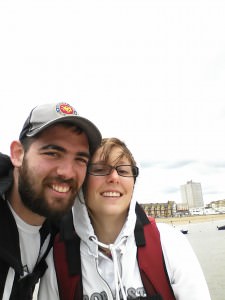 We are just 2 average Canadians that decided they wanted to see more of life than Toronto, deciding to drop everything and just travel. We don’t like saying we put our lives on hold (as many do say) because our life is honestly just beginning. Ashley and Chris (Jexter from Almost Fearless Backpackers) are our names. We left for our Europe trip in June 2012 and are off to Asia in just a couple of months.

Both from Canada and born in the GTA (Greater Toronto Area) of Ontario. Chris was born in Brampton and now living in Stratford and Ashley was born in Toronto and still living in Toronto. Soon to live together in Toronto after our next trip to Asia 🙂 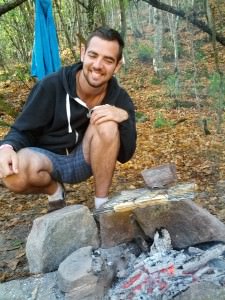 More places than most, but still not enough in our eyes. With the list of every country in the world to tick off, we are far from finish. We have been to many places together and some not, but together we have been in and around England, Spain, Bulgaria, Poland, Hungary, Canada, U.S.A, Germany, Isla Roatan, Mexico and Belize..

As of now, we are back at home (in Canada) to save up a little money before our next trip in June.

It was a tough choice, but we chose the places that really had an impact on our lives. We chose: Bulgaria, Spain (specifically these cities Taull, Galicia and Bunol) and Isla Roatán (Honduras). 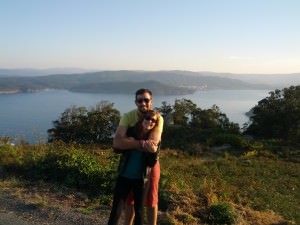 Chris’s best travel experience was one that probably will never be forgotten. It started off with a road trip through Bulgaria that led to a final night camping on a camp site. Except it took us nearly 2 hours of driving up and down the same road multiple times just to find this campsite. Stupid GPS. We finally found it and had to set up our brand new massive 2-room tent. That took another 2 hours because it didn’t come with instructions and there was nobody around to help us figure it out. Just a bunch of tent poles and fabric. Sounds pretty shitty right? Well that’s what we thought too, until the people that own the campsite invited us in for dinner and drinks. They fed us sooo much food and sooo many drinks that we felt like we were part of the family. We stayed up drinking and talking with them until 1 or 2am, learning everything there is about Bulgaria. Also they refused to let us pay for our stay. This was his best travel experience because it’s really what we’re on a mission to do – meet the locals and hear their story.

When you are about to embark on your adventure of a lifetime, you expect everything to be great…am I right? Well this wasn’t the case for Ashley. Ashley’s worst travel experience was the plane ride from her home town to the start of Jexter’s adventures, London, England. An 8 hour flight is already pretty bad, but now imagine getting that feeling where you are starting to get the common cold – body aches, stuffy nose and sore throat – AND having to sit next to someone who managed to take up half of your seat AND snored the entire plane ride…what a great start to their adventure, eh? 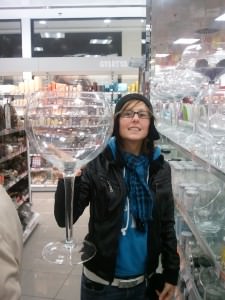 The funniest travel experience was one that we got to share with our friends that we met in Spain and reunited again with in Germany. It was Oktoberfest, so we were already having a blast! We stopped for a treat at one of the bakeries in Marienplatz. We had gotten simple things, but our friend’s went all out and ordered jelly-filled, powdered chocolate covered donuts. Well you know how they always say, don’t breathe in while taking a bite from something powdered? Well that’s because it will cause you to choke and blow out powder everywhere – which is exactly what happened to our friend. His girlfriend’s face  was now covered in chocolate powder. It was you-had-to-be-there moment, but it’s still funny for us 😀

For Ashley, this experience was one that is never forgotten. We had decided to go camping near Devil’s Bridge in Ardino, Bulgaria – a beautiful hand-crafted bridge over top a river. After setting up camp, in the rain at 6pm, it was starting to get dark and we hadn’t even made a fire to start cooking dinner yet. Needless to say it was at least 10pm before we were able to eat anything. After finally getting to eat we didn’t have enough time to properly clean up as it was pitch-black outside – so we said we would do it in the morning. That night, after falling asleep, Ashley hears crinkling noises outside of the tent. Now keep in mind, she has NEVER camped out in woods before. She was freaking out (silently) because the thought of a not-so ferocious animal outside was too much for her too handle. She was up all night, shaking and scared, listening carefully to every sound making sure nothing was getting closer. But needless to say it was a learning experience. She is much better now when it comes to camping 🙂

1. Participate in a Help X/Staydu opportunity at least once during your trip. It will not only help you to meet locals and learn about the culture, but you might get free food and/or accommodations out of it as well!

2. Get outside of the big city/tourist areas and explore some of the smaller villages and towns as they tend to be more interesting (as most of the “good stuff” like caves, mountains, castles etc. are on the outside of the cities. Also, by staying in smaller towns/villages you can get to know some of the locals and ask them for tips and tricks to visiting that country.

A LOT. We never plan to stop traveling. But for the nearest future, we hop on a plane on June 4th to England, Ireland, Amsterdam, France and India. Those are the booked flights for far, but for the rest of the trip we plan to visit Thailand, Cambodia, Laos, Vietnam, Malaysia and much more.

Ashley and Chris, owners of Almost Fearless Backpackers, are two Canadian budget backpackers. Chris is professional Chef in Canada. Armed with a passion to cook and travel, his big fantasy dream is to own his own travel themed café with the knowledge of food that he has learned from traveling around the world. Jexy, (AKA Ashley) is a professional traveler at heart but by profession is a counselor for abused women and children. She studied International languages – speaking french and a little spanish, she is Chris’s language dictionary.  Together they want to continue travelling together, getting to hopefully a few countries/cities in every continent before settling down to open Chris’s travel themed café.

Keep up to date with Ashley and Chris and get connected:

Thanks to Ashley and Chris for taking the time to do this World Traveller Interview. If you want to be interviewed in this series called world travellers, just get in touch with me, using the form below: