The latest in my World Travellers series is Ben Prosser From Modern Travelling. Ben is a top English lad who could also have featured in my Backpacking Buddies series in fact as we were out in Brazil together in 2014 and stayed in the same hostel in Iguacu during the 2014 World Cup. Ben is a Burnley FC fan who loves to travel, read all about his stories here and follow his blog on Modern Travelling.

Where are you from?
I am originally from Burnley in the UK, but I moved around a lot as a child so it has always been difficult for me to identify a single place as where “I’m From.” I spent a number of years growing up in Canada and the USA and it was my desire to revisit these places that really kick-started my travelling in later years. 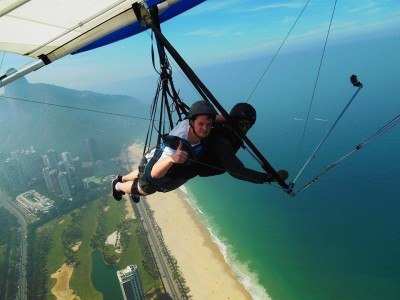 Where have you been?
I started off revisiting the US and I traveled there extensively covering around 30+ states. I then joined the cruise line industry after graduating university which took me to Mexico and others areas of the Caribbean. I have just recently spent a year in Australia and have also visited various parts of Europe, China, South America and New Zealand.

Where are you now?
Back home in the wet and wonderful North Yorkshire! 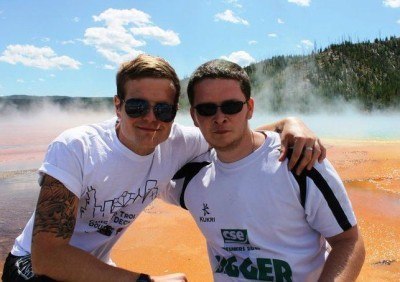 What are the top 3 places you’ve visited?
Rio de Janeiro without a doubt is my favourite city that I have visited. It really does have a little bit of everything, culture, history and is even home to 1 of the 7 natural wonders of the world. New Zealand would have to be my favourite country. It is amazing how much there is to see in a country that is no bigger than the UK. I spent a month there and still felt like I was only just scratching the surface. I am also a huge LOTR geek so that probably makes me a little bias as well! Then I think I will finish with my favourite landmark which would be Yellowstone National Park. I don’t think I have ever been anywhere as beautiful as there. The geysers are absolutely fantastic, again I am a bit of a geology buff so anything volcanic really interests me. 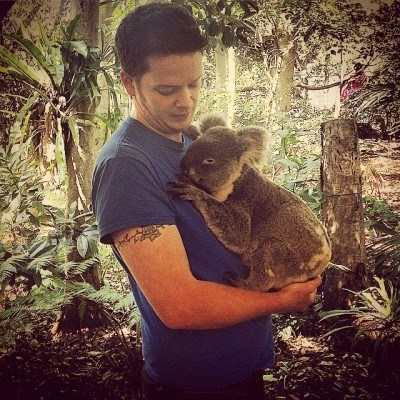 What is the best travel experience you’ve had?
Hands down the best travel experience I have ever had was doing a Hanglide over Rio de Janeiro. Unlike other adrenaline experiences like Skydiving or Bungee Jumping which are over in 30 seconds or a couple of minutes, you really do get the chance to take in the scenery which is absolutely breathtaking. On one side you get a great view of the Favelas nestling up to Rainforest, and then perfect blue sea and beaches on the other as well as a Birds eye view of Rio’s landmarks like Sugar Loaf mountain and Christ the Redeemer. You literally get about 12 minutes air time so you really did get the opportunity to take it all in. I will also never forget the man who took me shouting at me to keep running until I’m running on air, because if I stop we are both dead! The problems of being a little bit on the heavier side when running off of mountains!

What is the funniest travel experience you’ve had?
The funniest experience I have ever had would probably of been a certain incident in San Francisco in 2011 that literally scarred me for for a good year or two, and was probably indirectly related to an events 6 months later that nearly killed me, but 5 years on I can now see the funny side. Without going into too embarrassingly a detail, if you have the option of a Maccy’s bathroom take it, don’t try to hold it to the hotel, but if you do, most definitely do not forget your room key! 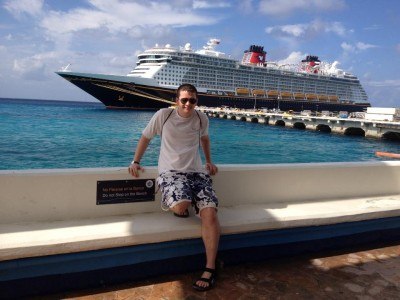 What is the scariest travel experience you’ve had?
The scariest experience I have ever had was when working on the Disney Fantasy in 2012, we got caught in Hurricane Sandy. I won’t go into too many details here because the last thing I want is to have Mickey Mouse tracking me down but lets just say there was a lot of vomit and falling over involved. There are probably still youtube videos of the carnage involved if you want to see what I went through in person!

What is the most random job you have had on your travels?
The most random job I have had was probably one of the most recent when backpacking in Australia. When randomly applying to bar jobs on Gumtree I received a random reply from a new bar opening in Kings Cross in Sydney. I naturally though, yeah this is going to be a little dodgy but I need the money so I’ll go along. Ends up being a 12 million dollar opening of the X-Studio located directly beneath the Coca Cola sign, one of the most iconic locations in Sydney. The studio was home to the Kyle and Jackie O radio show and I had the opportunity to meet the owner Ron Creevey, Kyle Sandilands a judge from Australia’s got talent, the infamous John Ibrahim who I shook hands with not having a clue who he was, and of course good old Nelly the rapper from the 90’s. There were probably many more elite Sydney socialites that I met and had no clue who they were! But the team and staff there were amazing to work with and it really was one of my highlights of my time in Australia. 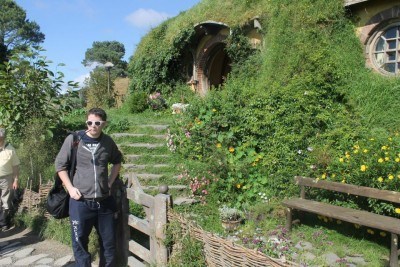 How do you fund your travels?
I fund my travel in a variety of ways. If I’m not working whilst I’m travelling like I did in Australia and on the cruise lines etc what I normally do is work short stints back in the UK, up to 6 months but will literally rack up as many hours as possible so I can save as much money as I can in as short a period of time as I can. I often will work a number of jobs at any single time even when travelling. The most continuous jobs I’ve had are through photography, in particular taking pictures in nightclubs and also in recruitment. I have found that working with children and having qualifications in that area is always handy when looking to work and travel. Also not owning a car is always a good way to save money for travelling!

What 3 tips would you give a new traveller before they set off on their adventure?
My first tip and the most important one is to not set off if there is anything that may hold you back. Quite often when travelling it may be the only time you get to see that place or even it could be that trip is your trip of your lifetime. So don’t let anyone or anything hold you back so you can absolutely enjoy every moment of it to the best of your ability!

My second tip is to prepare, prepare, prepare. Always know where it is you are going and what you want to achieve when there. Have an idea of your itinerary, research places to stay and preferably have your travel booked in advance. Know hoe much things are going to cost and know your daily allowance and stick to it. Don’t be one of those people who burns through all their money in the first week on alcohol and then has to compromise and make sacrifices the rest of the trip!

My last tip is security. Things can and do go wrong when travelling. If you can go without bringing your most fancy phone, camera, laptop then do. Have a travel card and low amounts of cash. Stay in a group especially when drinking, and get things like money belts. I even found a belt that had a secret pocket on the inside where you can hide a few notes in case you do get robbed. Luckily I never have had that problem but you never know when the worst may happen! 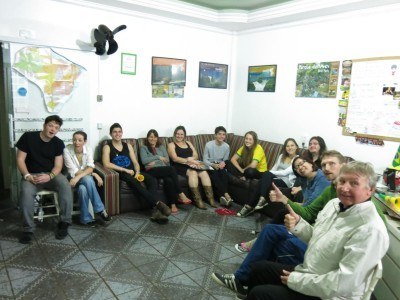 Watching the World Cup Semi Final together with Ben in Foz do Iguacu, Brazil in 2014

What are your future travel plans?
I am currently in a slight hiatus working towards a big trip in 18 months time where I want to do a trek from Ecuador to Argentina, taking in sights like the Amazon Rainforest and Manchu Picchu on the way. Then when in Argentina I want to get the boat to Antarctica. A trip motivated largely from this man Jonny Blair himself! Then a year on after that I plan to go to the World Cup again this time in Russia and then take the Trans Siberian express to China where I hope to see Mt Everest and the Great Wall. If I have the opportunity I would then hopefully also take the standard backpacker route through SE Asia. In the meantime I am hoping to see a lot more of Europe, knocking countries off on my way to the 50 country mark and hopefully getting up to Iceland where I want to track down the Aurora Borealis, another of the 7 natural wonders of the world taking me to 4 out of 7 and over the half way mark! I am also working on my first book which I hope to have completed by April this year!

Biography
My name is Ben and I am 27 years old from the UK. I am the author of the travel blog Modern Travelling.  I moved around a lot as a child living in Philadelphia and Montreal for a number of years. I graduated from the University of Edinburgh in 2012 and spent my summers at University working as a camp counsellor in the USA. After graduating I joined Disney Cruise Lines and worked on the Disney Fantasy. After leaving Disney I have expanded my travelling to South America and Australasia and started blogging in 2014 when I went to the World Cup in Brazil.

Thanks to Ben for being the latest in my series of World Travellers! If you travel the world and run a travel blog or are a travel writer, please get in touch, you can be featured, either e-mail jonny (at) dontstopliving (dot) net or head to my contacts page and get connected! You can also subscribe to Don’t Stop Living by filling in the form below! Safe travels!