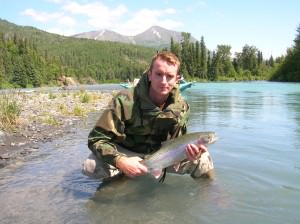 In my ongoing series with fellow world travellers, we catch a real life glimpse into the lives of adventurers, nomads, entrepreneurs and people who generally don’t have a home! Today we welcome Greg Rodgers from Vagabonding Life to the series!

I’m Greg Rodgers and I’m addicted to this crazy world of ours.

I’m from Lexington, Kentucky, USA, but I’ve been location independent since January 2006 . That’s a fancy way of saying that I’m homeless. 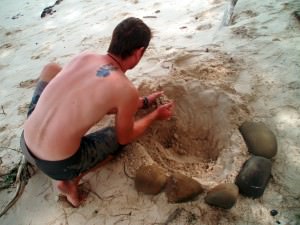 Greg Rodgers vagabonding in Borneo – setting up a fire.

I can’t give a nifty country count because not only do I not know it off the top of my head, it’s a ridiculous thing to track. I spend most of my time in Asia but have been to Europe many times, Egypt, South America, Mexico, Hawaii three times, Alaska twice, and quite a few other places that were willing or naive enough to stamp me in. I most recently returned from India and Sri Lanka.

I’m back in the U.S. at the moment to do taxes, laundry, and remind my family what I look like in person. I came ‘home’ at Christmas for a reset so that I don’t get too burned out on the road. Burnout can make traveling lose its magic. When you walk past 1000-year-old temples like they’re not even there because you’ve seen so many already, it’s time to take a break. 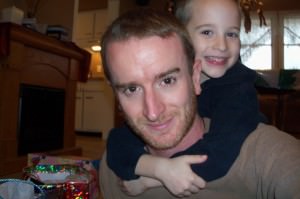 Greg Rodgers gets some family time in – reminded his nephew what he looks like in between his global adventures!

Picking only three is a cruel request! Here are the first three that come to mind:

Malaysian Borneo is a favorite of mine. It’s an outdoor-adventure paradise with enough endangered species and undeveloped beaches to keep you busy for months.

I loved the Togean Islands in Sulawesi, Indonesia. They’re hard to reach and covered with jungle; the wild feeling of camping on the isolated islands makes you want to grow a beard and build something out of bamboo. They’ve got gigantic coconut crabs, saltwater crocodiles, and plenty of sharks around them. 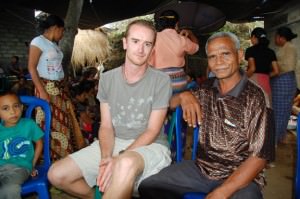 Greg with an INdonesian Village Chief – can you guess which one is which?

Yunnan in the south of China is gorgeous. I trekked through the Tiger Leaping Gorge and was blown away by watching rain replenish the Yangtze River which eventually gives life to all of Southeast Asia. 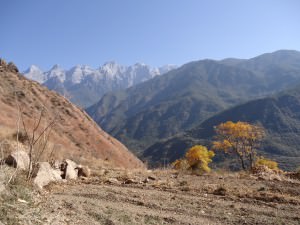 The mountains and hikes near Tiger Leaping Gorge – Greg and I both share a love for China’s epic Yunnan Province!

I tend to fall in love on the road. A lot. Enough said before I get into trouble.

Traveling exposes you to humanity in the raw, both good and bad. You mostly get good stuff, but sometimes the horrific stuff sneaks in from time to time. I still deal with nightmares about the bad stuff. Yuck.

The first one that comes to mind is from my first hostel dorm experience in Dublin. A guy stumbled into the eight-bed room after hours; he smelled like he was wearing more beer than he drank. Lost, he tried to climb into bed with me then systematically went around the dark room trying to find his bunk. He received lots of “feck offs” before he finally found what he thought was his.

Thing is, the large South African guy already occupying the bed was passed out drunk as well, so there wasn’t much resistance. After an apparent night of spooning, they both got a little surprise in the morning and woke the room up expressing their terror. 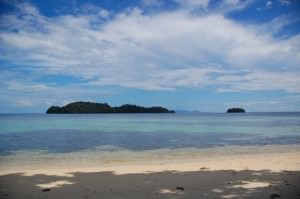 Greg loves the outdoors – one of his photos of the Togean Islands in Sulawesi, Indonesia

I’ve managed to nearly get myself killed a handful of times over the last seven years. I guess the scariest off the top of my head would be when I drowned and had to be rescued while surfing in Bali. I also had some serious trouble diving a shipwreck while in Egypt, was lucky to survive.

Don’t make rigid plans. Having some sort of set itinerary or a list of must-sees will only create stress and could potentially keep you out of more spontaneous adventures.

Talk to everyone – and I mean everyone – locals and travelers both, even if they are outside of your age group, social class, cultural paradigms, whatever. You can learn something from everyone.

Travel alone. Or if you travel with a partner, arrange for some significant time apart in the middle of the trip. Being alone on the road for the first time is an enlightening experience from which you will draw upon for the rest of your life.

I’m working on a potential press trip to return back to Borneo, but at the moment plans are still open. Wherever I end up, I can guarantee that it will be warm and cheap!

Links – get connected with Greg!!:

Check out Greg’s ‘Backpacking Guide‘
Tweet and Twit with Greg : Vagabonding Travel on Twitter
Thanks to Greg Rodgers for taking the time to do this World Traveller Interview. If you want to be interviewed in this series called world travellers, just get in touch with me, using the form below, the main requirements are that you have to own a travel website of some description and be a traveller 😉 :

Also please get connected with me in the following ways: