Time for yet another cool world travellers interview. This time it’s Rob and Lina who run the website Erohisms. 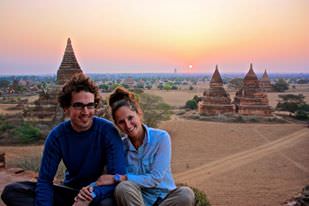 Rob and Lina, one of the coolest, curliest-haired, and cooking-crazy married couples around! Rob is an entrepreneur and software engineer. I’m a communications and branding specialist, as well as a writer, which is why I’ll be answering this questionnaire :o)

Our most recent “home” is San Francisco, which is where we own an apartment. Before that, we lived in NYC. 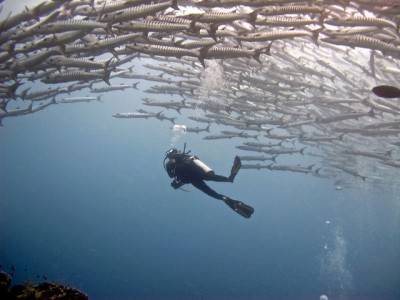 The beautiful South Island of New Zealand. We’ve been living here since October and are moving to Queenstown next week!

Thank goodness you allow for three, because narrowing it down to that is hard enough. I’ll stick to this trip since that’s what readers can actually see and read about on our blog.

Bagan in Burma quite possibly has the most surreal sunrise in the world.

The Three Passes Trek in Everest was the most physically and emotionally challenging thing we’ve ever done, especially because we did it without porters and in only 17 days.

Diving at Sipadan was incredible. We saw countless sharks, turtles, and swam amongst schools of barracuda and jackfish. We also stayed on an oil rig turned dive rig, so it was like a liveaboard but a lot bigger! It was an incredible thing to realize how vast and alive the underwater world is. 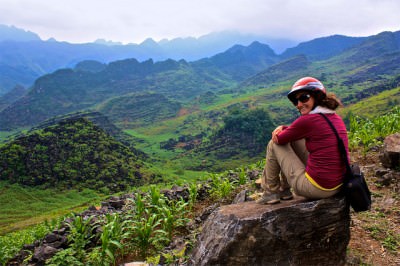 Oops – I think I compounded the last question with this one, so I’ll be general here. This entire experience—quitting our jobs, setting a spending goal of $1000pp/month, winging it around Australasia for a year—is incredibly awesome. We feel so lucky to have been able to do this, but at the same time our story proves that anyone can do the same thing. It costs less to travel the world than stay at home.

Besides being stuck on countless slow/broken/dusty/smoky buses you mean? The absolute worst was probably when we were pulled over by a corrupt cop in Vietnam who wanted us to pay him off. We refused and after a while he gave up, but the whole thing was pretty nerve wrecking, especially when he snatched Rob’s keys. Being stranded on the side of the road for 5+ hours our first day in Cambodia is a close second.

We accidentally became guests of honor at an Akha (tribal) wedding in northernLaos. Rob is pretty tall, so all the men at the wedding were quite taken with him and decided that they wanted to be his newest and best drinking buddy. Rob played division 1 football in college, so his tolerance and ability to chug a whole bottle of beer at one go provided hours of entertainment. All the wedding guests attempting to use our Lao phrase book to communicate with us was a close second for funniest that night. 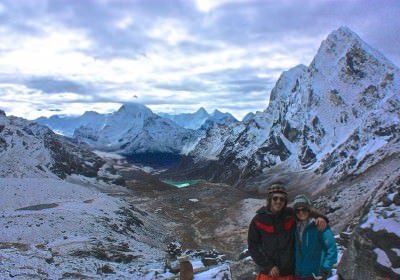 Wow! Rob and Lina at Everest!!

Shit. This sort of compounds with worst.

No no… I’ll give you something different. During the Three Passes Trek, there are several glacier crossings. Unfortunately they most often occur at the VERY end of the day, after you’ve gone over one of the super high passes. This means you’re pretty tired and not as careful as you should be. We were crossing the Khumbu Glacier after an eight-hour day and I slipped a bit on the ice. When I tried to catch myself with my pole, the ice underneath gave in and, with a very loud “bang,” fell into the crevice.

So I did what anyone about to die on a glacier would do—I froze. I must have stood there for 15 seconds with my left foot hanging in the air over imminent death when Rob finally yelled, “Move, Lina. Move!”

That brought me out of my state of shock and I jumped onto the more solid ice up ahead. To say I was shaken up would be the understatement of the decade.

I tutored a monk in Luang Prabang, but that was just for volunteer work. We haven’t worked for money during our travels.

Rental income plus a decent amount of day trading. We’re essentially living off of savings. 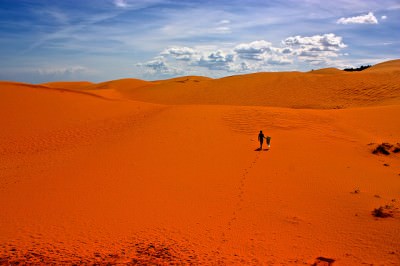 Don’t overplan it. It’s good to do some research ahead of time—like visas, vaccinations, must-see sights—but allow for random moments of joy and discovery. The beauty of long-term travel is just that: it’s long-term. Plenty of things we did, including our Everest trek, just came about because we met travelers along the way who share a recommendation.

Splurge when it means something truly unforgettable. There were some things we knew we didn’t want to miss in the adventure and experience department and these things typically came with “hefty” price tags. Sure, spending $300 on diving sounds expensive when you live on $15 a day, but it’s nothing in the grand scheme of things. It’s also how much a decent hotel in America costs for one night. So allow yourself to splurge every now and then on the things that matter. That might be a Full Moon Party or a trek. It’ll be different for each person.

Live in the moment. Perhaps our blog is four months late because we did this too much, but I honestly think it’s important to unplug a bit on your travels and soak in the culture and rhythm of the place you’re visiting. Chances are the locals there aren’t Instagramming on their iPhones, updating their Facebook, or staring into their Macbooks. So unplug. Sip a warm beer while staring at the water. And enjoy.

We’re in New Zealand until this May, at which point we’re going back to the States for a yet undetermined amount of time. We really want to explore Eastern Europe, so chances are we’ll do a trip there sometime in 2014.

Rob and Lina Eroh are the voices behind erohisms (pronounced “arrow-isms”). Read their stories as they go from well-employed to well-traveled on $1000/person/month. If you’re into adventure travel, awesome photography, and behind the scenes exposés, you’ll love following their journey.

Thanks to Rob and Lina for being the latest in my series of World Travellers! If you travel the world and run a travel blog or are a travel writer, please get in touch, you can be featured (there’s a HUGE waiting list at present), either e-mail jonny (at) dontstopliving (dot) net or head to my contacts page and get connected! You can also subscribe to Don’t Stop Living by filling in the form below! Safe travels!

4 thoughts on “World Travellers: Rob and Lina from Erohisms”