On my return to magnetic Kyrgyzstan, I set about checking out some more sights in the country now that the visa applications were over for a while and next on my list was Burana Tower. I teamed up with local company I’m Nomad, thanks to my friends at Silk Road Explore for getting me in touch. Backpacking in Kyrgyzstan: Touring Burana Tower and the Lost City of Balasagun with I’m Nomad

Organising a Tour to Burana Tower
In terms of getting to Burana Tower, most tourists base themselves in Bishkek and go to Burana on a day trip, or just as feasible, a half day trip. Burana Tower and the lost city of Balasagun are situated near Tokmok, east of Bishkek. To organise your trip, book through Silkroadexplore.com or I’m Nomad. My guide was a local guy called Akai, a great lad. On route to Burana Tower What Exactly is Burana Tower?
The Burana Tower is a large minaret in the Chuy Valley in northern Kyrgyzstan. It is located about 80 km east of the magnetic capital of Bishkek, near the town of Tokmok. The tower, is part of a lost city known as Balasagun, along with grave markers, some earthworks and the remnants of a castle and a mausoleum hat-trick. Balasagun was established by the Karakhanids at the end of the 9th century. Chilling out at the top of Burana Tower, Kyrgyzstan

The tower was originally 45 metres (148 feet) high. However, over the centuries a number of earthquakes caused significant damage to the structure and it is now just over half the height it once was. The last major earthquake in the 15th century destroyed the top half of the tower, reducing it to its current height of 25 m. In the early 1900s, Russian immigrants to the area used some of the bricks from the tower for new building projects. A renovation project was carried out in the 1970s to restore its foundation and repair the west-facing side of the tower, which was in danger of collapse. You can notice that repair work at the tower’s base and perhaps the most telling thing of all is – that the tower tilts! The leaning tower of Burana…

Three Main Sights at Burana Tower
Once you get to Burana Tower, there are three main sights to check out, each quite different and you should aim to do all three. You pay 60 Som to go into and up to the top of Burana Tower and 50 Som for the Burana Tower Museum. Touring the graveyard is free. Tickets are issued for both. 1.Burana Tower
The tower itself is the main attraction. This Minaret has survived an earthquake however it is now shorter than it was. The tower is open year round from 9am to 5pm with a few exceptions. Once inside the grounds, a lady that does the tours meets us and I get my tickets from her. As I have my guide with me, Akai, she gives him the key for the tower and we can open the lock and go in ourselves. There were no other tourists here, but this place is amazing, so please come and check it out! We get the key and open the door and Akai and I walk the narrow steps to the top of the tower. Views are sensational and Akai tells me a few legends and myths, stories from the history of Burana Tower. One of which was that Gengis Khan came here and at the top of the tower his hat blew off and he felt the tower was sacred so ensured it was never destroyed. The steps to the top of Burana Tower Akai and I at the top of Burana Tower At the foot of Burana Tower Akai at the top of Burana As mentioned, notably the tower also leans to one side – truly this is Kyrgyzstan’s answer to Italy’s Leaning Tower of Pisa. At the top of Burana Tower Flying my Northern Ireland flag at the top of Burana Tower

2.Burana Tower Museum
When you walk through the entrance to the lost city of Balasagun, on the right of Burana Tower is a small museum. This is open most days and costs 50 Som to enter (60 US cents). It is not normally busy so the lady that works here usually has time to give you a guided tour, as she did with me. She gave the guided tour in English which was a pleasant surprise. The museum contains old relics such as coins, jewellery, pottery and stones all of which were found at or near the site here at Balasagun. It’s all pretty interesting and unique. Photography in the museum is not permitted. A map of Balasagun

3.Graveyard
Behind the museum is a graveyard. These gravestones are very distinctive, similar to the Petroglyphs at Cholpon Ata. Again, some of them date back to the 11th century and the writing varies – some of it is in Farsi and some in Russian/Kyrgyz. As well as these three main sights, there are also the remains of the old city walls and mausoleums, all of which are pretty grounded and barely exist. After checking out the three main sights, we admire the countryside and eat some lunch. It’s actually a pretty short trip but totally worth it in the magic of magnetic Kyrgyzstan. A country close to my heart the last few months, where I have been temporarily based at Apple Hostel. 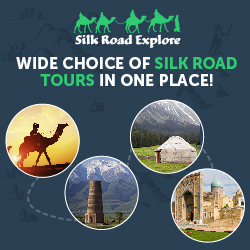 Here are the videos of my tour to Burana Tower in Kyrgyzstan:

5 thoughts on “Backpacking in Kyrgyzstan: Touring Burana Tower and the Lost City of Balasagun with I’m Nomad”