You’ll probably know I’m a big fan of bars in London and also that I’m heading back there this week. When I lived and breathed in England’s capital city, it became a weekly event seeking and searching for a new bar and I’m sure that in the last 15 years I have had a drink in over 800 different venues in London. So how the hell do you whittle 800 down to 5? You reminisce about the good times and they come to you, these are my top 5 bars in London with a bit of airport travel advice thrown in as I’m a walking travel guide after all. 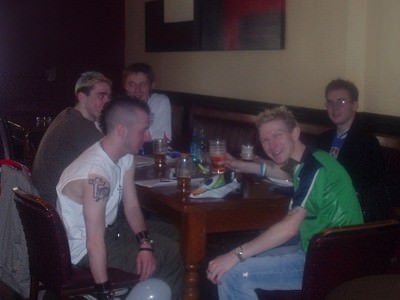 Out with the lads – my favourite bars in London, England

Getting to Central London from Heathrow
With Heathrow being on the tube line, I find it easier to just become lazy and hop on the tube to Central London. The M25 in and around Heathrow can be horrendous so buses and cars are not my preferred option. I’ll be tubing it next week on my return. 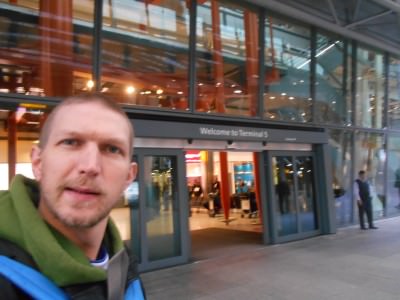 Getting to and from Gatwick Airport
Gatwick is South London and isn’t on the metro line so opposite to Heathrow, I find it easier to drive. I owned a car when I lived in London, Dartford and Bournemouth and I always took advantage of Gatwick Parking – fast and easy and just off the M25. There is a train that goes there and some bus routes but I highly recommend being your own boss and driving it. 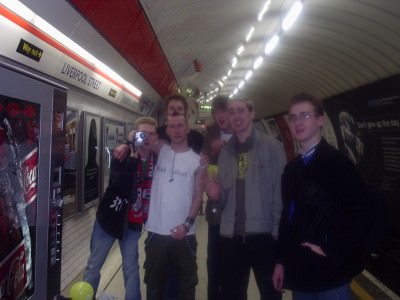 For Heathrow, tube it, for Gatwick take your car.

My Top 5 Bars in London, England
What you really want to know is what are my London top 5 and while this changes a lot, these are my current hat-trick+brace that I’ll be content with sitting in having a pint.

1. The Urban Bar, Whitechapel
Right opposite Whitechapel Tube Station is the cool Urban Bar. I’ve had so many top nights in there with my mates Neil, Austin and James. They used to have a zoo decor with giraffes etc. on the wall and we’d turn up with inflatables and cheese strings and eat them by the window watching London go by. It now looks like a tiger! 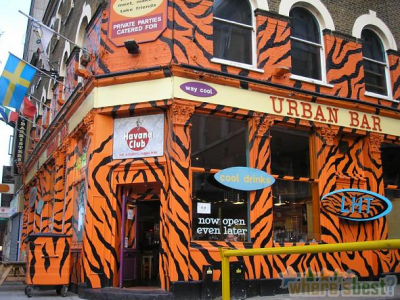 The Urban Bar in Whitechapel, photo from Wheresbest.co.uk

2. The Green Man, Soho
OK so this is in my list for its cheapness. Back in 2007 when I worked in PR in London, I could get a pint of beer in the Green Man for £1.50. Obviously prices have risen, but the bar is still there! 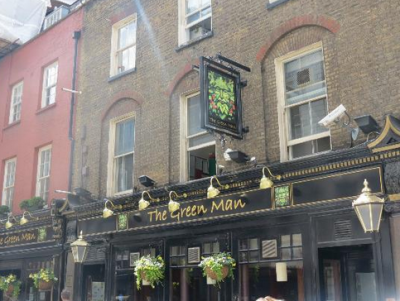 3. The Princess of Wales, Chari X
Situated on the street that leads to the train station at Charing Cross (which I self-nickname Chari X), and just up from the Embankment Tube Station, the Princess of Wales was always my “I’ve missed the train pint”. When I lived out in Dartford, there was about half an hour between each train. If I got to Charing Cross and I’d just missed one, I would pop into the Princess for a quick beer before getting the next train home. I returned to the Princess recently to meet up with my mate Arnie, a fellow Northern Ireland fan. 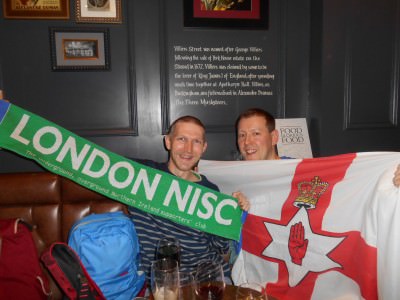 Arnie and I in the Princess of Wales, Chari X

4. The Traveller’s Tavern, Victoria
This pub has to get in their on name alone. As a keen traveller and backpacker, this pub is always the pub where I went while waiting on a bus, coach or megabus as it’s close to the Victoria main station and Victoria Green Line Station. On my recent visit, they serve Guinness for under a fiver and free Wi-Fi. 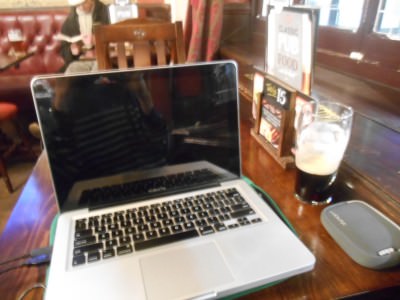 Getting online in the Traveller’s Tavern with a Guinness.

5. The Green, Sheppy B
The Green makes the list only because it is the ONLY local pub I ever really had when I lived in London. It’s in Shepherd’s Bush (which I self-nickname Sheppy B) The fact is I once lived on Wood Lane and lived a 2 minute walk from the Green. I was a regular for the three months I lived in the area and due to the fact that I lived in a cheap and dingy bedsit at the time, I often spent my nights in the Green watching football, relaxing and doing some “travel work” which back in 2006 sowed the seeds for my eventual travel blog which was launched a year later, oh yes that’s the one you are reading now! The below photo courtesy of Beer in the Evening.com. 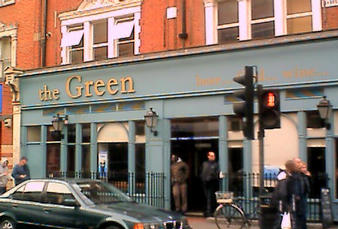 The Green in Sheppy B – this was once my local.

Goodness knows what London bars I will end up in on Saturday but I definitely cannot wait!

1 thought on “My 5 Favourite Bars in London, England”