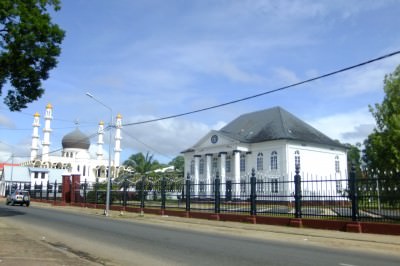 A Muslim Mosque and a Jewish Synagogue on Kaiser Street, Paramaribo, Suriname. Quite amazing!

When I made it to Suriname in 2011 (after some visa issues in Caracas!!), I totally loved the capital city there – Paramaribo! I explored a lot of the city itself, taking in a top 15 sights and was very very surprised to note that a Muslim Mosque sits right beside a Jewish Synagogue!! I’m serious! This cannot be true of many cities in the world, but here in Paramaribo, capital city of Suriname I found a uniqueness and extraordinariness in this discovery… 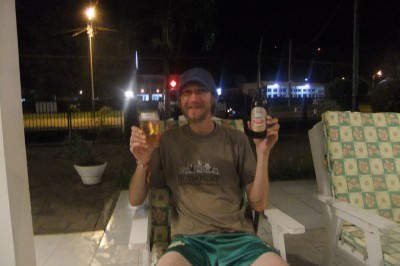 Oh Yeah Baby!! Having a Parbo beer on my “off the beaten track” trip to Paramaribo in Suriname in 2011. Great place!

Where can you see a Muslim Mosque beside a Jewish Synagogue in Paramaribo?

Head to King Street/ Kaiser Street/ Keizerstraat in the city centre. It’s less than a 5 minute walk from the waterfront. Paramaribo is an un-ventured gem of a city in fact and has loads of quirky things, such as the Sunday bird singing Tweetyfest! Here’s the two buildings: 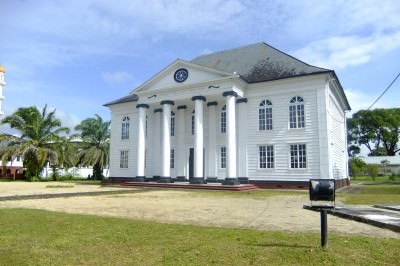 Neveh Shalom Synagogue: The Jewish Synagogue in Paramaribo which sits beside a Muslim Mosque

The Neveh Shalom Synagogue sits proudly behind gates and overlooking a large garden. It’s on the right hand side of Keizerstraat as you head away from the waterfront part of Paramaribo. The Synagogue is much older than the Mosque, with the current building dating back to 1843. 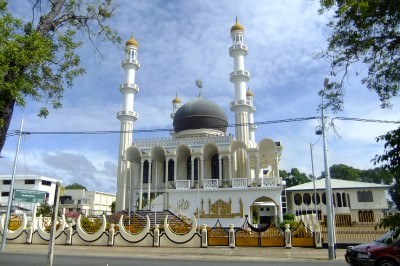 Mosque Keizerstraat: The Muslim Mosque in Paramaribo is the largest in the Caribbean!

Bearing the simple name of Mosque Keizerstraat, this mosque in Paramaribo is a wonderful work of art and gleams in gardens, fronted by fences bearing islamic symbols. This is the largest Mosque in the Caribbean, which Suriname is a part of despite its geographical position on the main continent of South America. The Mosque was opened in 1984. 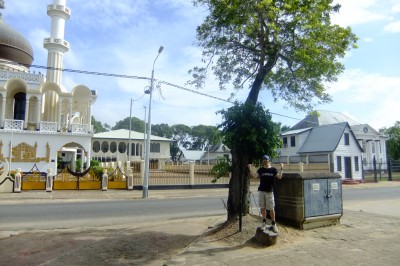 “Sitting on the fence!” Or rather that’s me standing in between the Muslim Mosque and the Jewish Synagogue in Paramaribo, Suriname!

To see these excellent, well maintained religious buildings sitting side by side in harmony here is quite astounding. I had never seen anything like this before in fact, unless I seriously missed something on my travels. Although there were no other backpackers in Paramaribo, I got to spend a day with an older Dutch couple who were touring the city and we saw it all together – they kindly took the above photo of me “sitting on the fence” or rather standing in between the two completely different religious buildings. I am not sure what other countries and cities have these two buildings sitting side by side but this was a rare sight that’s for sure. Paramaribo revels in its cultural diversity! 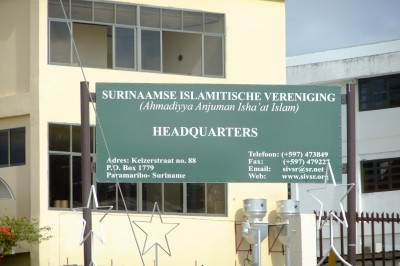 The Surinamese Islamic Headquarters are also at this Mosque – the largest in the Caribbean!

There will be more to come on Paramaribo as I loved it. I have been three times in total and also crossed both land borders to and from Guyana and French Guyana (where you can also get a Suriname visa in Cayenne). I’d also recommend a Sugar Cane Trail. If you want somewhere to stay, either try the Etienne’s Unique apartments at Fajalobi or the excellent Guesthouse Amice. South America isn’t just Brazil and Argentina you know…

My video from Kaiser Street in Paramaribo where a Muslim Mosque beside a Jewish Synagogue has you gasping in disbelief:

7 thoughts on “A Muslim Mosque Beside a Jewish Synagogue in Paramaribo, Suriname”