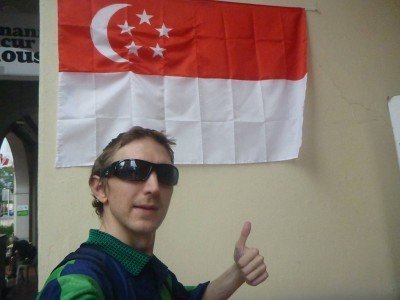 Back Backpacking in Singapore: Reminiscing My First Visit Here

So there I was, still in my 20s, backpacking in Singapore. Smile on my face, with my travel buddy Natalja. We milked it, we sweated it like crazy and we saw as much as we could in a two day stint before getting a night train back into Malaysia. It was October 2009. I was such a naive backpacker , culture-struck and ready to explore the world. It was only from working in PR in London (ironically for Tiger Beer) and selling ice cream on Bournemouth beach that ever granted me this dream. 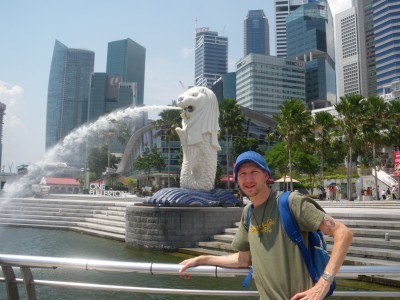 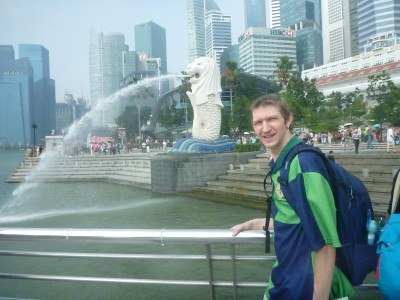 And here I am, it’s August 2015. I’m back in Singapore and you know what, I’m not going to be my usual exploratory self. I am NOT going to visit any new parts of Singapore and I don’t care. I’ve got other ideas on this trip. Officially it’s my 7th time in Singapore, though only 4 times have I actually had the stamp. I had three airport stop overs in between times, and I remember them – on route to China, to Hong Kong, to Indonesia. The first time here I (we) explored Singapore like a backpacking beast. I had my map, my Berlitz guide and we were ticking off sights left right and centre. Raffles Hotel, Merlion, Esplanade, Theatres on the Bay, Night Safari, China Town, World’s Biggest Fountain, Orchard Road, Clarke Quay, Little India etc… 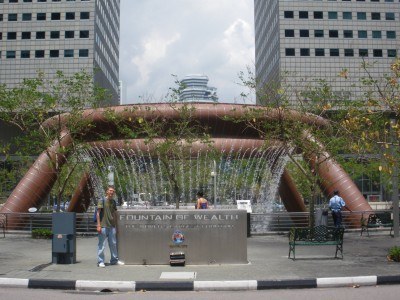 Fountain of Wealth – tick it off

We did the lot and we had fun. We smelt really bad on the last night as I struggled to find my passport just a minute before our night train to Kuala Lumpur. I had time to pop to the 7/11 in Singapore to buy Natalja and I a Tiger beer each and we sank them on the train as we headed back into Malaysia. 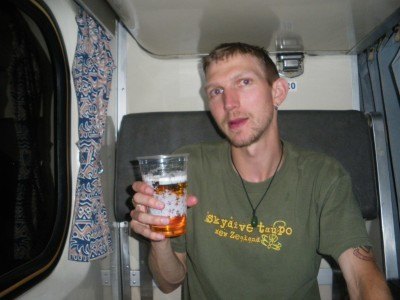 Back to Malaysia with a beer on the train

My two visits to Singapore in between were different. One time it was a mega barbecue and a big catch up with my cousin Chris. The other time, I was just in the process of moving to Hong Kong so I headed to China Town as well as visiting Obama’s Irish Pub for a Guinness with the President. This time, I’m reminiscing and you know what I am NOT ticking off any new sights, nor am I going to write cool new backpacking tips for you. 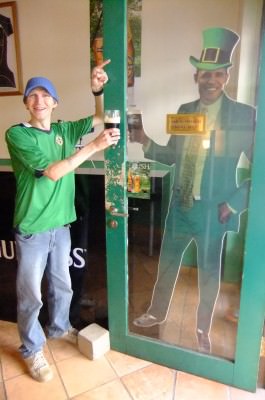 Having a beer with the US President in Singapore, Obama’s Irish Pub, 2011

This time, in 2015, I’m here completely reliving my 2009 memories, for a good reason. Life is a progression and I’m almost comparing the 2015 Jonny Blair to the 2009 one. I feel I’m a better person, but I had more energy, more zest, more real backpacking spirit back then. I won’t lie. I used to be hardcore, now I’m not. We bought cheap apples and ate in the Hawker markets, we stayed in Kallang at the City Backpackers. We didn’t use WiFi, I didn’t even Facebook people with photos to tell them where I was. I did have my travel blog of course and in 2009, I typed up a few posts on Singapore, so I’m doing the same now. From the same city, from the same country for the same blog. Notably, from the same place. 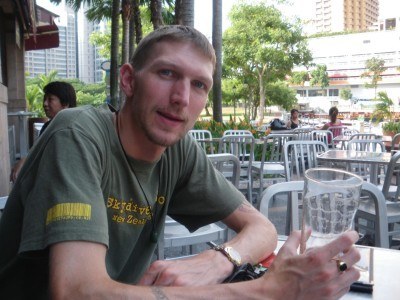 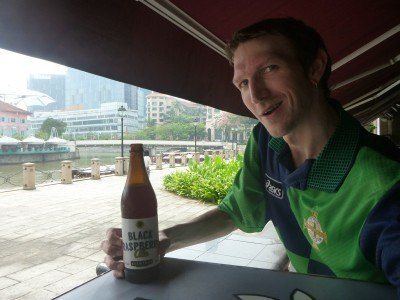 I sit at Brewerkz Bar in Clarke Quay writing this! Maybe it’s the same table… 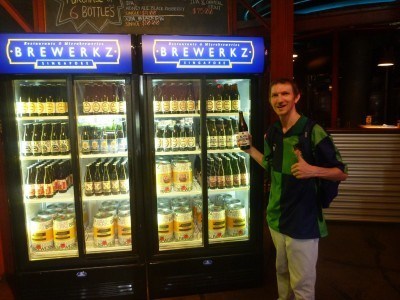 Bottom line here – I’m still a backpacker. This time I’m staying in the Green Kiwi Backpackers. I’m in a dorm room. It’s more central, I can walk from here to the main sights. So I did. I re-walked my first ever day in Singapore almost in its entireity, almost to the exact footstep and took the same photos. 2009 trip to 2015 trip – I tried to recreate it! 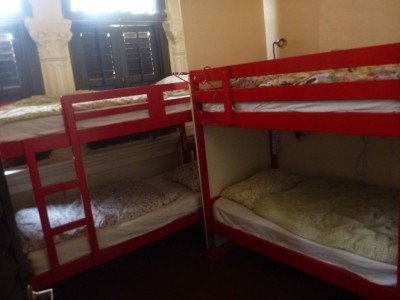 But my thoughts had changed. I was all vibrant, enthusiastic and stupid back then. Everything was amazing, yet I was sad. I had been through a break -up that year, I was on route to Australia with barely a penny to my name and I never knew where life would take me. I was a bit naive, adventurous and scared back then. Like I say, I ate apples and the cheapest curry on the menu and I bought a beer at Happy Hour just to bring me that smile. Oh yeah, but I splashed out too – back in 2009 we went to the Long Bar in the Raffles Hotel for a Singapore Sling. 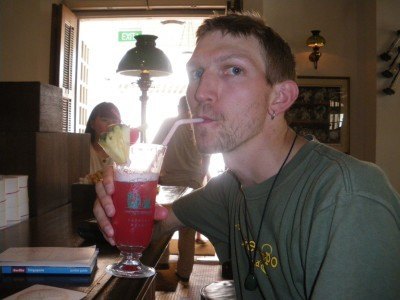 Do you want to know why we did that as budget backpackers? Well the real reason is, that we were so cheap but we felt we would never be here again in Singapore and we wanted that experience on what would probably be our only visit to the country. It was the whole “savour the moment thing, grab it while you can, don’t stop living” mentality. I didn’t believe I’d earn enough money to keep travelling for this long. I had a bit of cash before we landed in Australia so we enjoyed a Singapore Sling in the place it was invented. I we bloody enjoyed that. October 2009. There was a rawness about it. We deserved that drink. 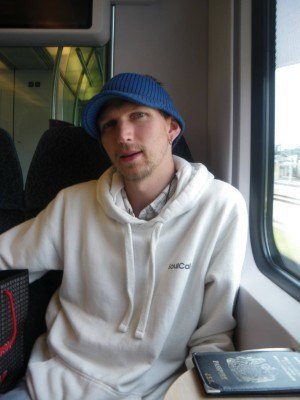 How have I felt on my return? I didn’t cry, but I got hugely sentimental. ON every corner of every street. I selfied myself at the Merlion, I walked past the cricket stadium, the Raffles Statue, Clarke Quay. I even went to the same bar for a beer (Brewerkz) in Clarke Quay. 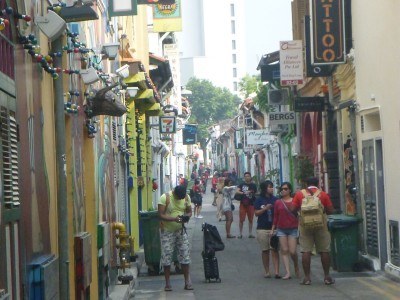 The streets of Singapore on my return

The weirdest thing for me is that this is me, 6 years on in the same place, doing the same thing to see how much I still love it. And I might surprise you here BUT I STILL love it. The only part that baffles (raffles?) me is that on my previous 2 trips in between times (both in 2011), I didn’t once get sentimental, nor did I revisit any of the sites from my first time here. We overlanded into Singapore in 2009, it was a train in and train out from Malaysia. This time has been self-rewarding. I really like it here. I like it in Singapore, but I think this might be because I love travel. I love it. I buzz off it. I remember that stupid smile I had when I first saw the Merlion in 2009. By the way, it’s only a f**king mermaid lion squirting water into the sea. But it’s good. It’s cool. I love it and thousands of people agree with me. They take photos here too. It’s got busier. 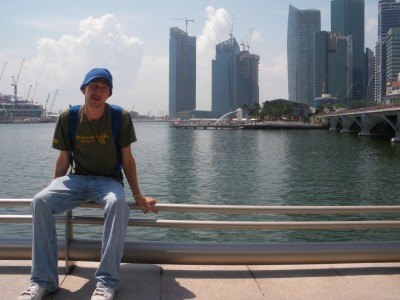 Singapore remains the same. The flavours of Asia and the influence of the United Kingdom all meet here in this flambouyant place.

“For a minute there, I lost myself” – Radiohead 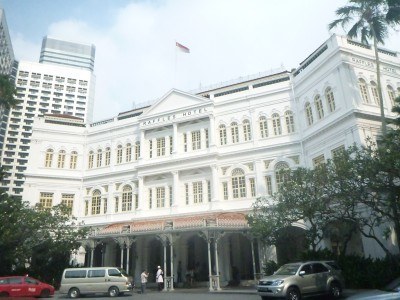 Have I changed from 2009 to 2015?
I’d have to answer with yes and no, and everything in between. In age, I have changed – I am now 6 years older. In inspiration I’m still the same, I’m inspired. In saving money by walking through the sights myself, I’m the same. But I get complimentary tours, lunch invites etc. now. I’m working as a travel writer. That much has changed. It feels like I’m working a bit when I’m here. In 2009, I paid full price for 2 Singapore Slings in the Long Bar at Raffles and felt justified. I didn’t regret it. We loved them. Here in 2015, I’m offered the same Singapore Slings and a lunch at Raffles as a courtesy, on behalf of the Raffles Hotel. I’ve been offered a full guided tour of the Marina Bay on the Sands. But I’m a budget backpacker. I’m YOUR budget backpacker. Do I deserve a free Singapore Sling? I feel I’ve earned it, but there’s something bold and beautiful about being skint, being on the road and scraping that last Singapore Dollar out of your sky rocket for that cherished sling. But don’t worry, because I won’t worry. We take what we get in life, but we work hard for it. I will, and you will too. I’m really bloody emotional as I head to Dhaka, on another journey in another day in the life. 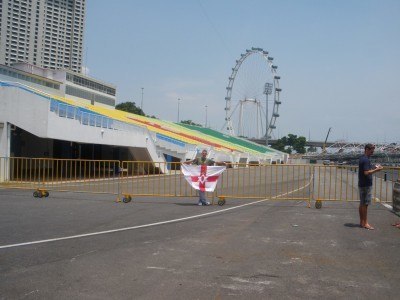 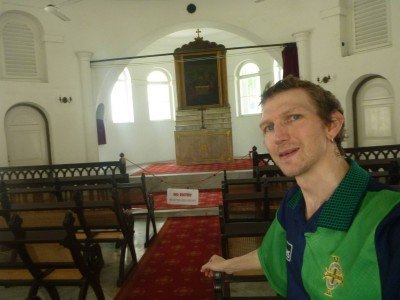 7 thoughts on “Back Backpacking in Singapore: Reminiscing My First Visit Here”