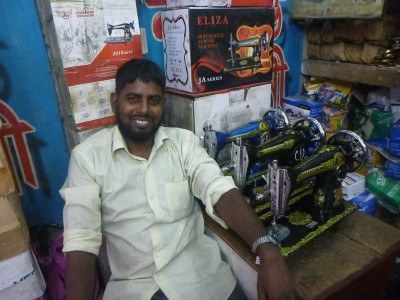 After getting my Bangladesh Visa in Hong Kong, I was off to explore Bangladesh, flying into Dhaka and overlanding down to Chittagong. What I didn’t realise is that when I hit country 103 with this place, just how manic and mayhemic it would actually be. Yeah you hear all sorts of things about Dhaka, but until you have been here for yourself, you don’t have a clue. Especially when I had just arrived from backpacking in Singapore. Singapore is understandable, it’s organised, it’s progressive. Bangladesh is the polar opposite, it’s chaotic, disorientating and non-changing. It is also ridiculously unpredictable. 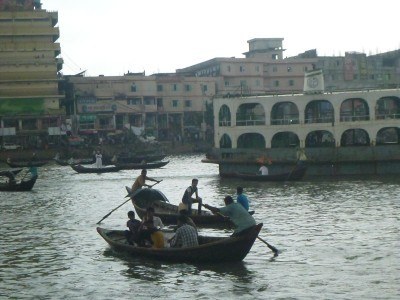 Harbour side in Dhaka, Bangladesh

While it would be easy to start with a “Top 5 sights” type of post, Dhaka hasn’t been like that. It’s more of a city for random stuff happening – going out, walking round the streets, getting a baby taxi (tuk tuk) and breathing in the never ending fumes of countless exhausts. It’s a city where life can never really stand still. There are a crazy amount of people on every corner of every street. All day long, and maybe when we are sleeping too. 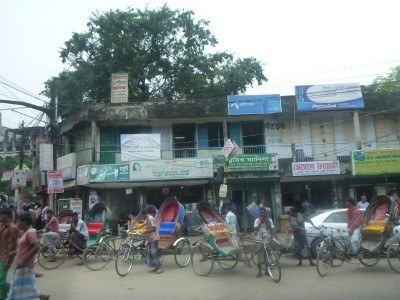 This is arguably the biggest test of my backpacking career. I stayed north of Dhaka in Uttara but backpacked like a beast through central Dhaka too – the Old Town, Motijheel, Sadarghat and the crazy markets. 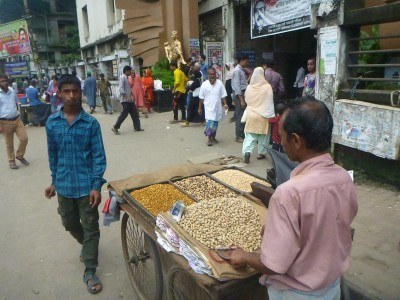 I was in the Old Town of Dhaka and as the only token white person for miles, you attract lots of attention. I’m taking photos and videos, left, right and middle. The reason being the weather was normally torrential rain and I was making the most of this rare dry period to get snap happy. A few locals chat to me, then a policeman comes over and talks away – very friendly. 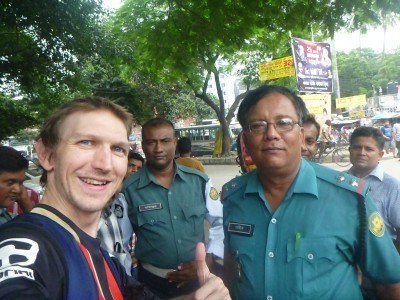 The local peeler and I

During the conversation with the policeman (who also gets his mobile out for a selfie of me and him), literally a crowd gathers just to see me – to see if I’m real. This crowd below gathered only because I was here. That much is f**king crazy. They almost take it in turns to be photographed with me. 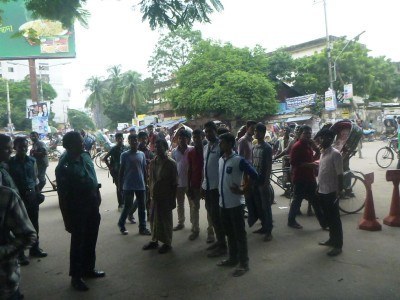 This crowd gathered because of me – this place is NUTS.

Then during all this, the locals are all posing for photos with me, and a guy pulls up on a motorbike. I’m introduced to him – a local journalist, Khan from the Observer and a Bangladeshi online “paper”. I’m standing there thinking what the hell is going on and as the guys pose for more photos, when they ask me where I’m from, I tell them Belfast (they won’t know Bangor) and Northern Ireland. Bemused looks and then I bring out my flag for a few photos, these guys are nuts about Cricket, but since Northern Ireland plays with the Ireland cricket team, then there are still bemused looks. I get a shout of England, again, close but no cigar! 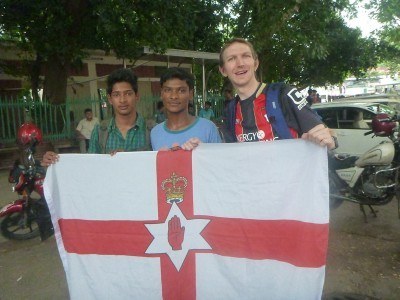 Posing with some locals with my Northern Ireland flag.

Just after this, the journalist Khan comes over for a chat and speaks a decent amount of English. The crowd quickly disintegrates and people go back to the lives they had before I backpacked down this random street. Khan and I talk to the police a bit too and then I tell him I am heading down to the river next to see the boats at Sadarghat. 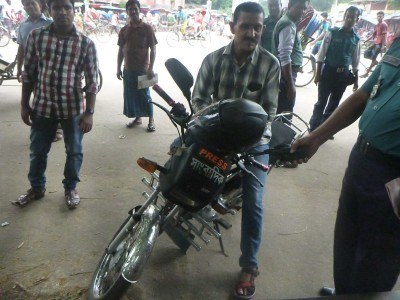 Khan on his motorbike

At first I’m thinking just to walk away, then I randomly ask if I can go with him on his motorbike. I also need to find a money changer (it’s hard to find – believe me) so he agrees to take me to both those places as well as a Sewing Machine shop. What?! I’m going backpacking to tour a sewing machine shop? Yes let’s go! I’ve toured a silver workshop in Java, a ceramics work shop in Marginea, a secret plastics factory in rural China and a candle factory in Swaziland, but a sewing machine shop? First time for me! 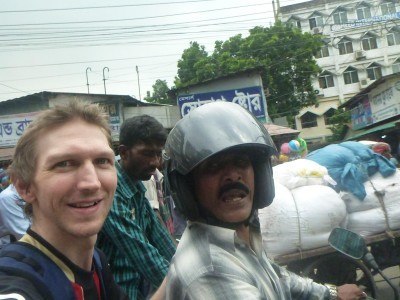 Where is Singer Pro Sewing Machine Shop?
It is somewhere between the Old Town and Sadarghat (by the River Buriganga) on a poky busy street. The entire area around it is disorganised. Completely. I was using tuk tuks, motorbike and rickshaws to try and tour this crazy city. 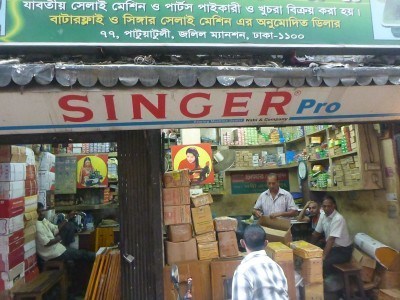 Arrival at Singer Pro Sewing Machine Shop
It has been bucketing (raining heavily) all morning and I have been drenched a few times. As we pull into the Sewing Machine Shop, we take shelter and I’m asked if I want a cigarette and a coke. I decline both, I’ve got some water. 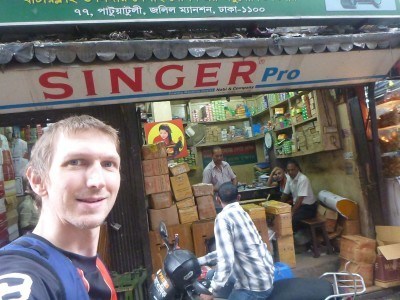 I’m given a seat at Singer and I’m introduced to the Sewing Machine lads. I’ll be honest we all shook hands and swapped names, but I can’t remember their names. I should have written them down. 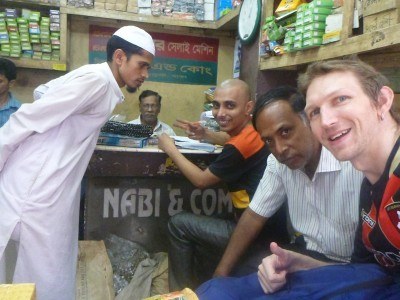 Khan’s Interview and a Tour
Khan does a quick interview with them and it’s all in Bengali but I get some translations and listen to it. 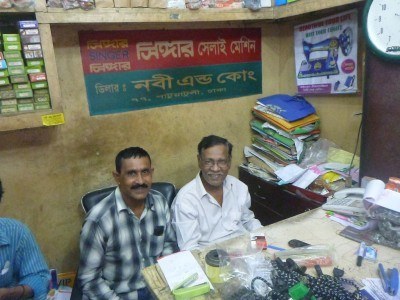 Basically this is what they all describe as “the best sewing machine shop in Bangladesh”. I have no idea if they are justified, but there are plenty of packages to be shipped out. 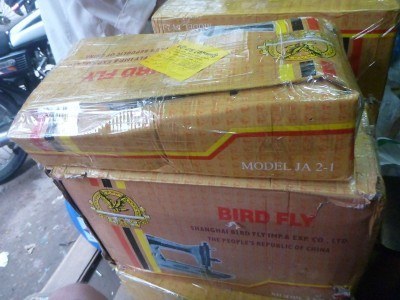 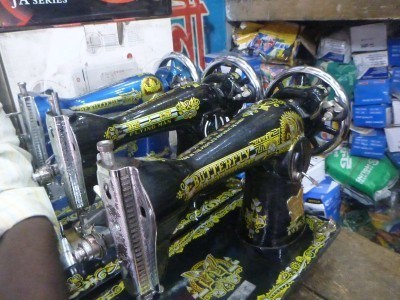 They are all ironically made in China. During my time in the shop, at least 2 customers purchase sewing machines. I’m there for about 30 minutes.

After checking out the sewing machine shop, I tour the harbour and we get caught in a torrential rainstorm. Khan kindly still gives me a lift to the money changer place he knows (the rate seems to be fixed and trustable in Bangladesh – when I was there in August 2015, the rate was $1US = 79 Bangladeshi Taka). 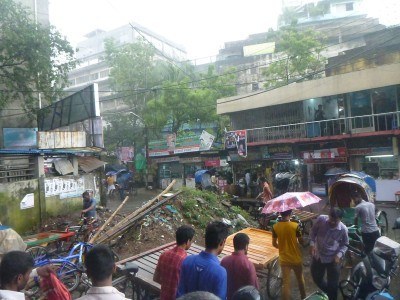 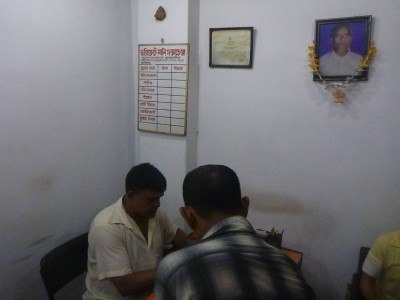 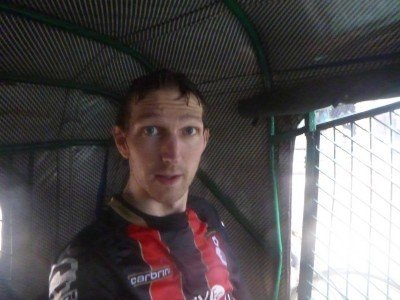 I offer to pay Khan petrol money and for the “tour”, but at first he declines. I pay him a few Taka at the end and he takes it and we say our goodbyes, swapping e-mail addresses. I tour some more markets in Dhaka but the torrential rain even causes my tuk tuk baby taxi to get caught in the floods so it’s back to Uttara I go. It has been a crazy day. 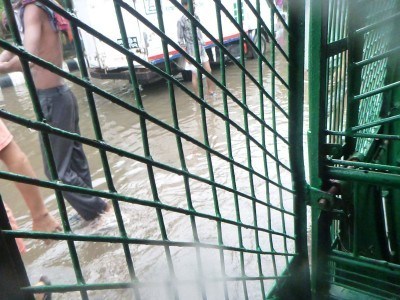 Floods from my tuk tuk seat in Dhaka, Bangladesh

So if you are ever in Dhaka Bangladesh and you need a decent sewing machine, then Singer Pro is the place to go! Here are a few videos from the day: