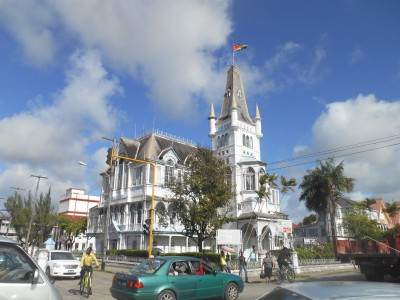 The City Hall in Georgetown, Guyana

Guyana is not the most obvious country on a backpacking tour of South America, and admittedly it is a slightly harder one to access than Brazil, Argentina etc. However these are the places I enjoy the most – less touristy, more raw and normally very inspiring. Georgetown is the capital of Guyana and is a good place to use as a base when you stay there. We stayed in the Rima Guesthouse and as well as touring Georgetown, we also went to Parika, Bartica, Sloth Island and Kaieteur Falls. There’s enough to keep you occupied in the country for at least a week (or more if you do some jungle treks).

When you’re in Georgetown, I recommend trying to check out these top 16 things to see and do. 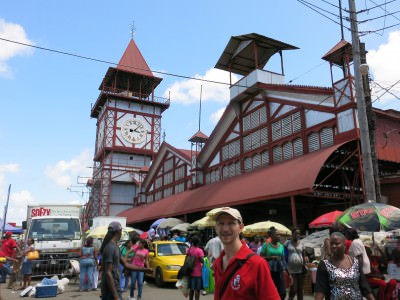 Top 16 things to see and do in Georgetown, Guyana.

1. Stabroek Market
The Caribbean meets South America here in what is a fascinating market. Fruit and vegetables are the main bargains to look out for in Stabroek Market. It’s a pretty building too. 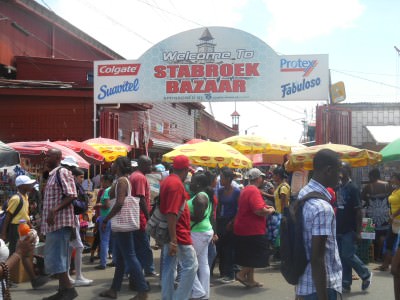 2. The Seawall
You have to check out the Seawall and get to know why it’s there…Georgetown is about 7 feet below sea level and therefore the threat of flooding and the tide coming in is very real. The locals were smart though – they built their houses on wooden stilts and they built this cool sea wall to keep the water at bay. 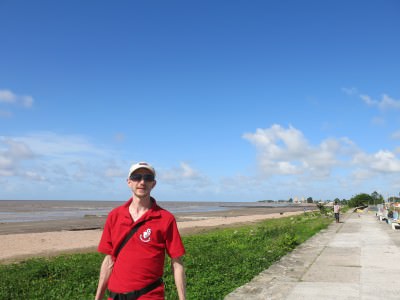 Standing at the start of the Seawall in Georgetown

There is some graffiti on parts of it – worth a stroll to check it out. 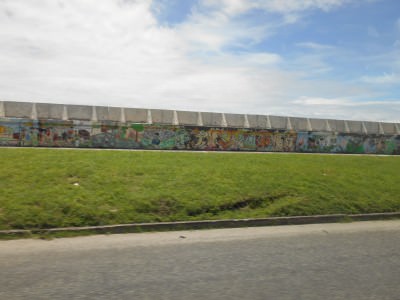 Graffiti on the seawall

3. Lunch at German’s
Despite the fact that this restaurant is called “German’s”, it is actually local food and a good place to try some Guyanese cuisine. This is where the locals go. We had a soup dish and a noodle dish in there and one of the other specialities is the the drink, called Mauby – like a spicy, sweet cinnamon/clove drink, similar to the Mocochinchi in Bolivia. 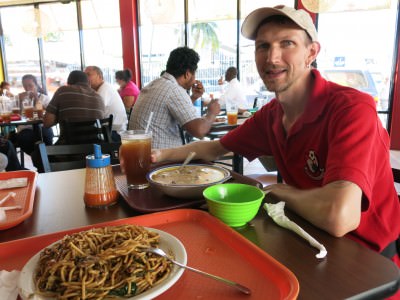 4. City Hall
The British rule in Guyana (once called British Guyana) meant lots of English style buildings. The City Hall is a good example of this. The Guyana flag flies proudly from the peak. 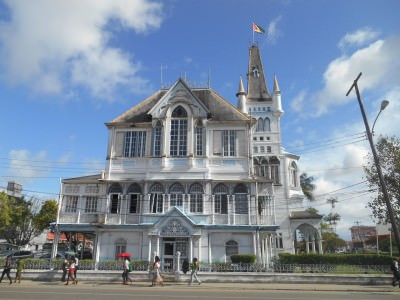 5. Fogarty’s
This is an old school department store from back in the day. It looks like it hasn’t seen a facelift for years and that’s what makes it good. Cheap supermarket downstairs, all sorts of goods upstairs and a cheap cafe at the entrance. 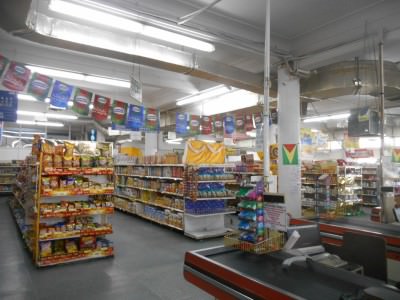 6. The Old Cricket Stadium
Cricket is the main sport here in Guyana and obviously the West Indies hosted the World Cup once. I checked out the old cricket stadium as well as the new one. I’m not a big fan of cricket, but it’s still worth a look. 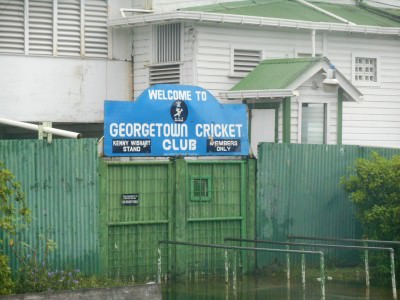 The Old Cricket Club in Georgetown 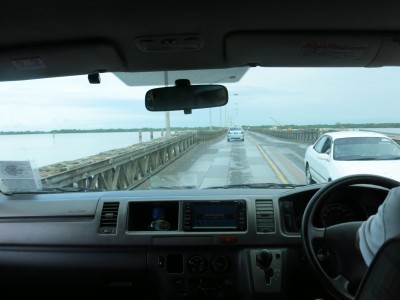 8. St. George’s Cathedral
This is probably the nicest building in the city centre and as our local guide Eugene claimed, it’s the tallest wooden building in the world – some claim that, though the Cathedral in Paramaribo is also mighty high. 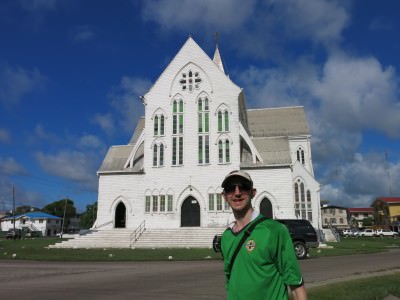 At the front of the Cathedral there is a Guyana flag and an England flag. 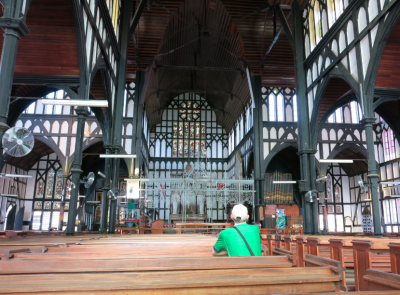 9. Providence Stadium
Providence Stadium is the National Stadium and is used primarily for cricket. It’s a big deal for the locals – Georgetown hosted some of the 2007 Cricket World Cup. The national football team also play here apparently, which confused me a bit as the cricket pitch is a different shape altogether. It’s on the edge of town. 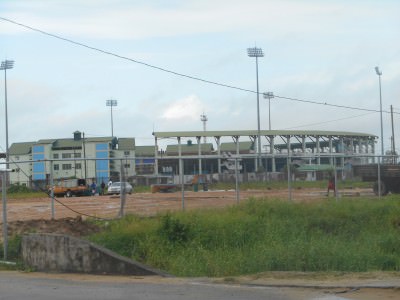 10. Botanic Gardens
Leafy gardens that houses Georgetown Zoo and the 7 ponds. Here you can see the graves of the Presidents of Guyana, including a Mausoleum for the first President Linden Forbes Sampson Burnham. 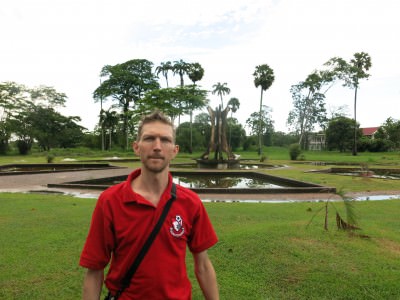 At Botanical Gardens at the 7 ponds and the mausoleum of the first President of Guyana.

11. Promenade Gardens
In the city centre there is a leafy and floral garden worth a quick stroll near Independence Square. 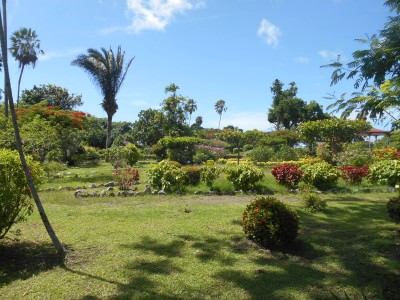 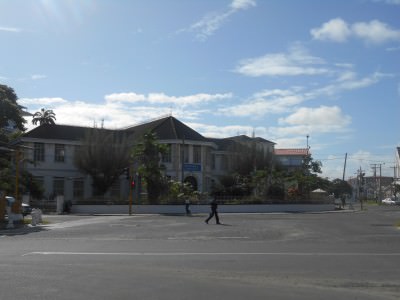 13. The High Court
The Court building in Georgetown is British too and features a statue of Queen Victoria. The statue is damaged and defaced and the story goes that the locals once removed the statue from outside the court and dumped it somewhere and parts of it broke. 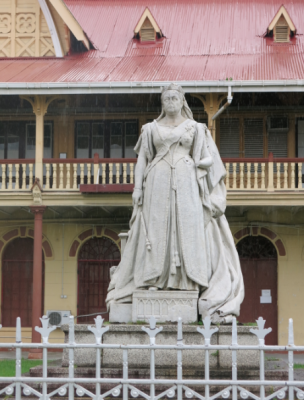 Later on the Guyanese decided they liked it and put it back where it once belonged – in front of the court, where it now sits. 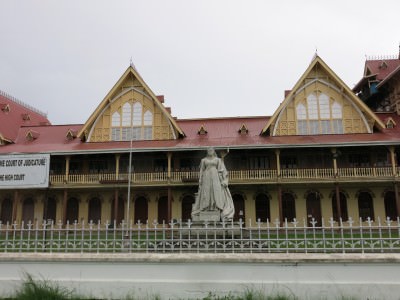 The Court and the Queen Victoria statue.

14. Parliament
The Parliament buildings date back to the British era. Politics in Guyana tend to go by race – so the Indian population will vote for an Indian etc. 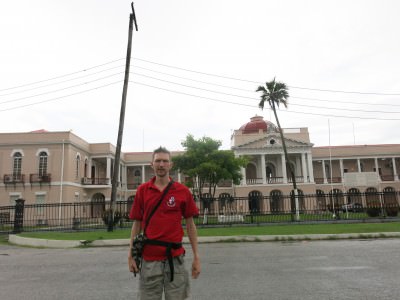 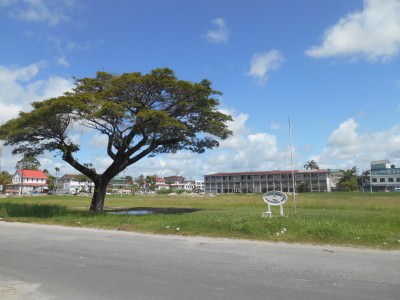 16. World’s Worst Cemetery
As we drive out of Georgetown, our tour guide Eugene from Dagron Tours points out what is the world’s worst cemetery – they’ve left grass and weeds to just grow over the graves. An added quirky thing. Colourful none the less… 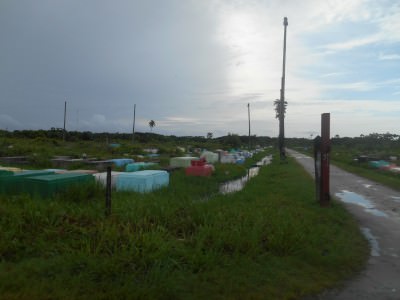 The world’s worst cemetery, in Georgetown.

So hopefully that should be enough to keep you occupied while touring Guyana’s capital city as well as the best bars in Guyana!

Here are some of my videos from Georgetown, backpacking in Guyana:

9 thoughts on “Backpacking in Guyana: Top 16 Things to See and Do in Georgetown”