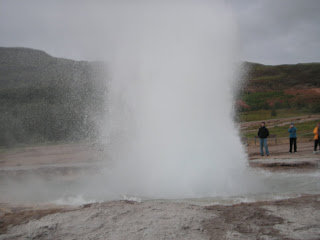 I had seen the Pohutu and Prince of Wales Feathers Geysir’s in Rotorua in New Zealand’s North Island in July 2007. Both were fascinating, but you had to pay entry into a ‘museum’ at Te Peiua on the outskirts of the city, and then walk round a custom-built set which led to the geysirs. That made it feel less natural and slightly more ‘commercial’ if you like, even though the beauty of these natural geysirs were not lost on me at the time. 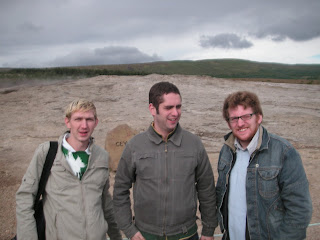 Then when in Iceland, it is of course famous for GEYSIR or THE GREAT GEYSIR (the eponymous name given to the large geysir at Haukadalur Valley in Iceland). It is the oldest known geysir in the world, dating back to 1294, and also used to be owned by Lord Craigavon from Northern Ireland, where I hail from. I visited it in September 2007 as part of the ‘Golden Circle’ Tour of Iceland and was suitably impressed. 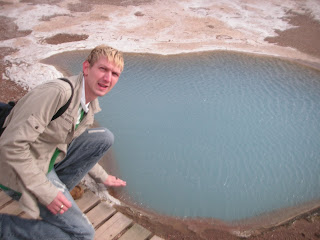 We chanted ‘dodgy geysir’, which is a reference to a London term for a bloke who may not be trustworthy, but also a play on words of the football chant ‘dodgy keeper’ for a match when the bloke in nets is having a nightmare. Think Dean Smyth era Glentoran.

Anyway this Geysir erupts every 7 or 8 minutes throughout the day, there is no charge to see it, it lies in a freezing valley area of countryside conveniently bereft of civilisation. I touched the trickles of water, which despite the freezing weather proved their volcanic-ness by being HOT (see the photo), but I didnt dare touch the water where a DANGER sign was, I believe that water can be up to 100 degrees celsius. Definite signs of the volcanic activity in northly Iceland.

There is a wee shap/shop nearby and they have a cinema show dedicated to the geysir. By this stage of my world trip, my budgeting was at a premium, so I just bought a wee souvenir in the shap/shop and hopped off on the rest of the tour.

Beers Tried – Gull, had a carryout tin in the car.

Where I Stayed – I didn’t, it was another ‘stop’ on the Golden Circle tour.

Average Price of a Pint of Beer – Don’t have a monkeys, but remember Iceland ain’t cheap.

Favourite Thing About Geysir – When it erupts obviously…

Moving Moment – Touching the hot water in the middle of a freezing place.

FACT – Until 1894 the Geysir area was owned by a local farmer. In that year the area was sold to James Craig (later Lord Craigavon), a whisky distiller and future Prime Minister of Northern Ireland. Initially he erected large fences around the site and an entrance fee was charged for visitors wishing to view the geysers. The following year however Craig appeared to tire of his project and gave the area as a present to a friend, E. Craig, who dropped the entrance fees. Later Craig’s nephew Hugh Rogers inherited the site. In 1935 he sold the site to film director Sigurður Jónasson who subsequently donated it to the Icelandic people in perpetuity.