Backpacking in Nicaragua: How to get from Leon to Granada for $2.80

As I’m backpacking in Nicaragua this week, I thought I’d give you a quick post on the costs of bus travel within the country, especially as recently the Lonely Planet sucks at giving you the correct information and the fastest, cheapest and easiest ways to travel around. For most of Central America, it has been wildly inaccurate! 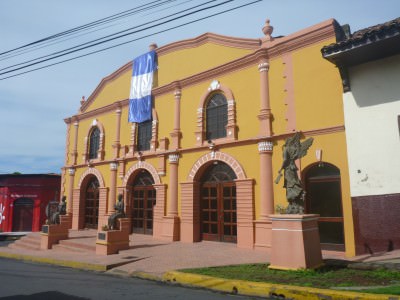 This is the cheapskate way to get from Leon to Granada. The backpacker style if you like. First up, no matter what hostel you are staying in, in Leon, please do not listen to the other travellers and staff about shared minibuses and booking shuttle buses direct. I have heard of people paying $15 – 20 US for this simple route just because they saw an advert in their hostel and booked it. Basically that entails piling a load of naive travellers into a minibus, picking them up, taking their $15 US and taking them to Granada in 2-3 hours. I did it in the same time, on local buses, meeting the locals and saved $12.20. It was definitely worth it to do this myself. Here’s how to get from Leon to Granada. 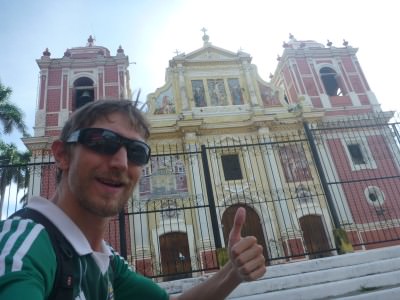 Checking out one of many many churches in Leon!

I deliberately booked into the Casona Colonial Hostel in Leon as it’s 1 kilometre from the bus station and 1 kilometre from Parque Central. Most travellers make a beeline straight for the centre to stay in the many hostels. I loved this place and location was a big big plus. 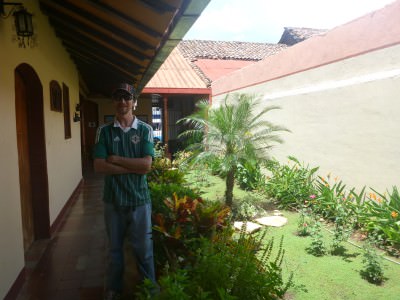 At my hostel in Leon – Casona Colonial

From the Casona Colonial Hostel I headed east past the Iglesia  de San Juan and on a walk in the hot sun to the bus station. After the Iglesia, turn left onto Avenida Pedro Arauz then onto 6a Calle (should be second street on the right at a busy-ish junction). If you get lost, ask the locals for “terminal de bus”, it’s not signposted but when you get to the massive market on your left you will know you are close. 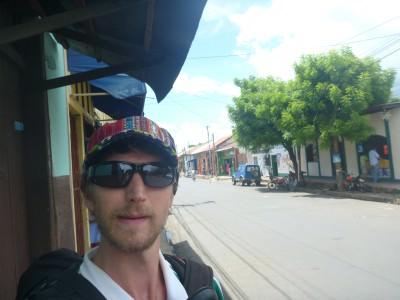 Walking out to the bus station in Leon.

I’m told you need to be aware of your belongings and stay alert here, but it seemed pretty safe when I was there. On arrival at the bus station, I found a mini-bus with Managua written on it. There are currently no direct local mini-buses to Granada – you need to do this in two legs – head on a bus from Leon to Managua first. 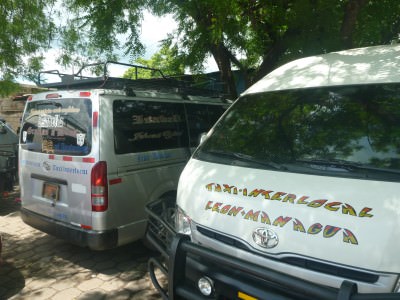 Buses from Leon to Managua.

Buses run from early morning until 9pm at night. I left Leon at 1.20 pm. The minibus will leave when it’s full, and this doesn’t take too long (mine was 15 minutes – time for a quick 40 cent Orange Juice!). 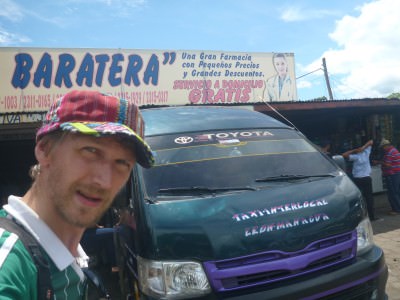 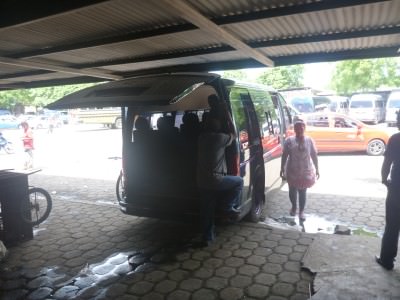 My minibus from Leon to Managua, Nicaragua.

Ask the driver for the price and the location of arrival in Managua. My mini-bus cost 51 Cordobas (about $1.90 US) and would take an hour and a half to get to the UCA terminal in Managua. You need to ensure you are going to the UCA in Managua. This bus station has the connection to Granada that you need. 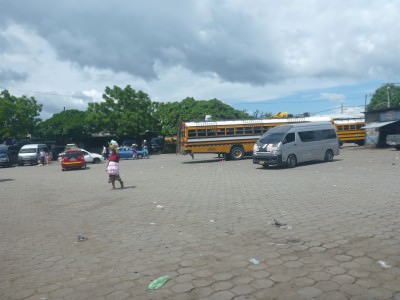 The bus station in Leon

For once I decided not to prolong my stay in the capital city, Managua, so I was passing through it. From what I saw on the bus it seems like a scattered mayhemic city!! It might be worth a trip for sure, but I decided on straight to Granada! 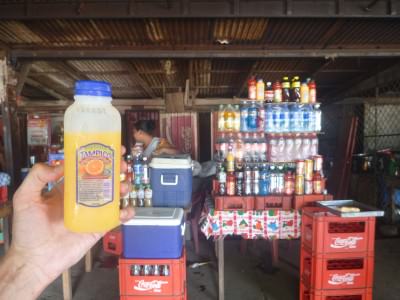 This part of the bus ride is scenic. After leaving Leon you will veer north onto the road past the lake. From here you get a vantage point over the lake at various intervals – Lake Managua. You also notice the prominent Volcan Momotombo to the left of the bus. 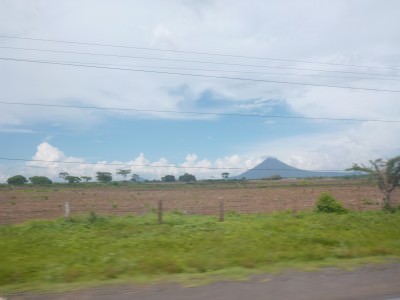 Great views on the minibus ride from Leon to Managua.

After 90 minutes, you are in Managua. Make sure you tell the driver where you want to get off – tell him UCA bus station. I arrived in Managua around 2.50 pm, having left Leon at 1.20 pm.

Managua
I didn’t linger long here, despite having loved my previous 5 visits to capital cities – Tegucigalpa, cycling in Guatemala City, loving San Salvador, exploring Belmopan and the football stadium tour in Mexico City. Sorry Managua, I was in and out fast – 20 minutes! I arrived in the capital city at 2.50pm and by 3.08pm I was on the bus to Granada! 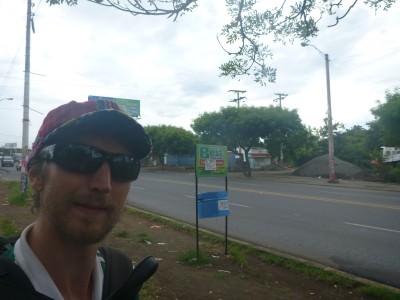 Backpacking in Managua for about 20 minutes!

The minibus driver stopped to let me out on the boulevard beside the University. All you need to do is cross the road to the other side where you see a kind of bus station full of minibuses. It’s a bit disorganised but you’ll find your bus to Granda – the destinations are written on the front of the buses. 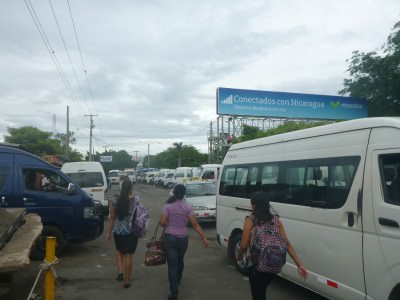 Searching for the bus from Managua to Granada.

As soon as I found my bus to Granada I was straight on – they leave when they are full and I was the last passenger to board. 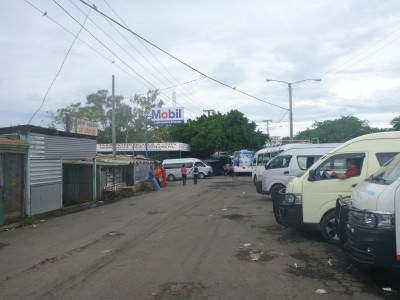 The UCA minibus station in Managua.

Managua to Granada
The road to Granada seems to go downhill for the most part, and the bus has tons and tons of scattered stops everywhere to pick and drop people off at random points. Only when you have left the sprawling suburbs of Managua do you pay the conductor for the bus. The cost was 24 Cordobas (about $0.90 US). My bus left around 3.08pm from Managua. 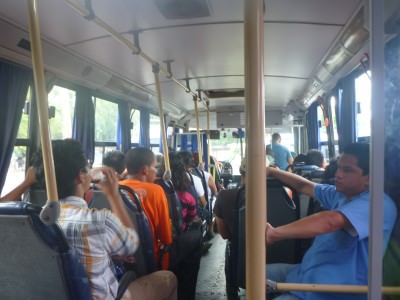 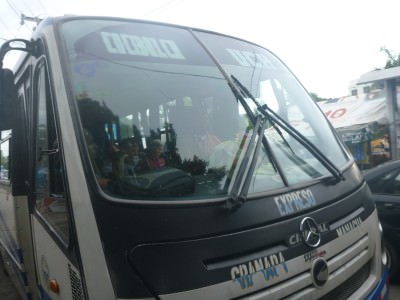 Arrival in Granada
I arrived in Granada around 4pm. On arrival you have a few options for getting off. I recommend just getting off in the main square, Parque Central as it’s near all the hostels, hotels, bars and restaurants.

I’ll aim to get some posts written on Leon, Rivas and Granada in the next few weeks, good luck doing this journey for cheap!:

11 thoughts on “Backpacking in Nicaragua: How to get from Leon to Granada for $2.80”