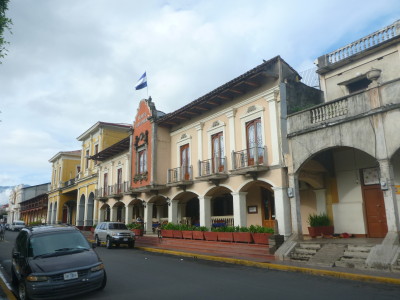 Out of all the countries in South and Central America, Nicaragua was the one that suffered most from my busy lifestyle. I only dedicated 5 days to the country in the end (a month in Guatemala and two weeks in Honduras were ‘to blame’) and for that reason, I decided to only visit Leon and Granada. I did pass through Managua but was basically only changing buses there so my soul opinions and experiences on Nicaragua come from Leon and Granada. I found Nicaragua a lot blander than the other countries, and slightly less intense in my short stint there, but I definitely enjoyed that! 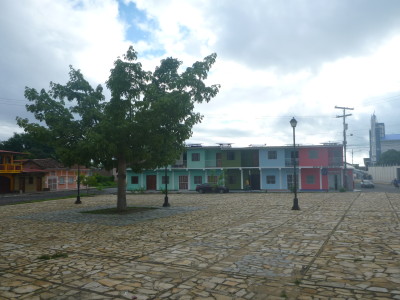 I crossed from Honduras at El Guasaule and stayed in Leon at the Casona Colonial Hostel. A fast couple of days there and I ended up in Granada. I actually ended up staying a day extra in Granada anyway and have highlighted a cool top 13 to check out for you here. 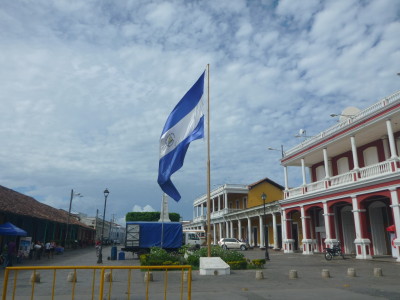 While backpacking in Granada I stayed in the basic but well located Hostel San Angel, which is family run and I had a few nights out too, including a meal in Nectar Bar. By day and night I’d recommend this top 13 in the city itself – obviously the lake and the islands offer extra things to see and do, but stick to checking out these 13 in the city and you’ll be ready for your happy hour Victoria beer on Calle La Calzada. 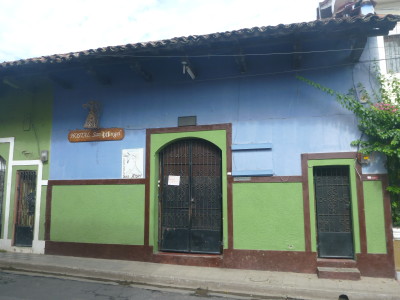 1. Antigua Estacion del Ferrocarril
The old railway station is worth a peek. No trains run anymore here sadly and they’re not common in Central America but here is a reminder of the way things were in Granada. Back in the days you could get a train to Leon or San Jose from here. 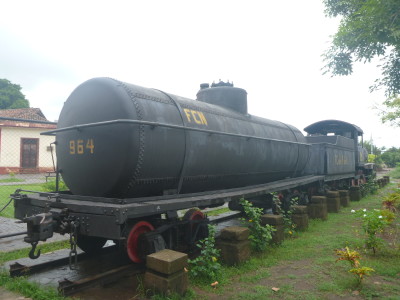 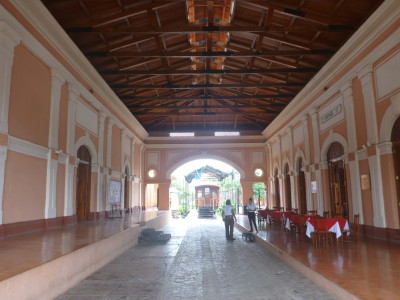 2. Estadio Roque T Zavala (Baseball Stadium)
It was interesting to learn that Baseball is the number one sport here in Nicaragua. While the other Central American countries concentrate on football, the Nicaraguans are proud of their baseball tradition, so I headed out to the stadium. 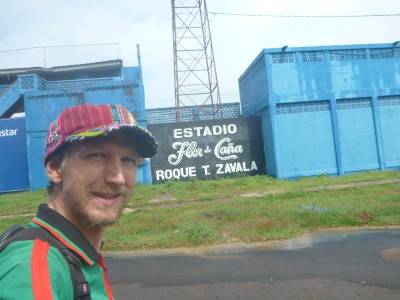 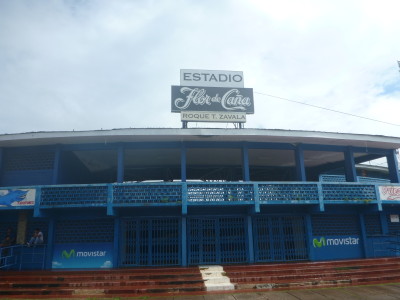 3. Parque Central
The main park is also the main focus of the town. Hotels sprout up out of nowhere, outdoor market stands sell food and drink and an avenue runs right down to the Lago (Lake. Use Parque Central to admire the architecture and get your bearing. 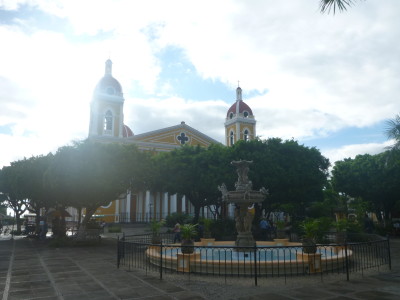 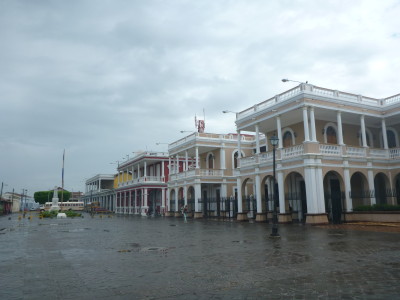 4. Capilla del Sagrado Corazon/Iglesia Guadeloupe
This old church sparkles out on a corner on your walk down to Lago de Nicaragua. It’s open all the time by the looks of things and is in need of repair. The name of this church varies but you can’t miss it. 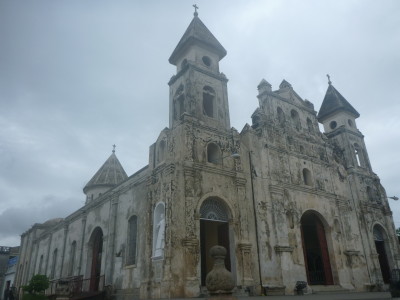 5. Lago de Nicaragua
The name of the Lake is actually Lago de Nicaragua and it’s massive. You can do all sorts of boat tours and activities here including hikes on Isla Ometepe. I was “laked out” after a week at Lago Atitlan (Guatemala) and having just spent a further week in the water diving in Honduras. So I just headed down to the Lakeside to admire it. There was a really pleasant mist in the air around the lake. 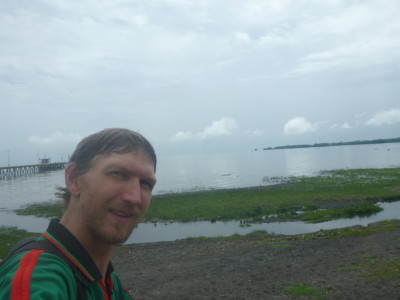 Down by the Lake – Lago de Nicaragua

6. Iglesia de la Merced
This marvellous church dates back to 1539. While the Church architecture is stunning, for me the reason to visit is to climb the steps to the Bell Tower for a glorious view over the city. It will cost you $1 US but it’s worth it. 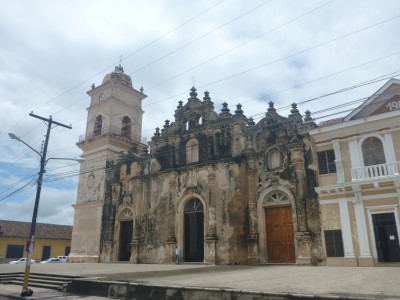 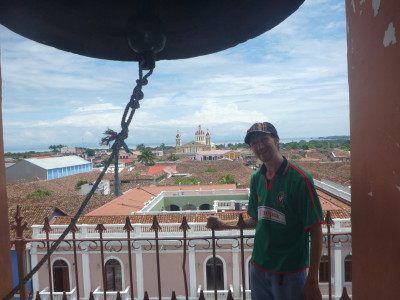 View from the Bell Tower at Iglesia de la Merced. 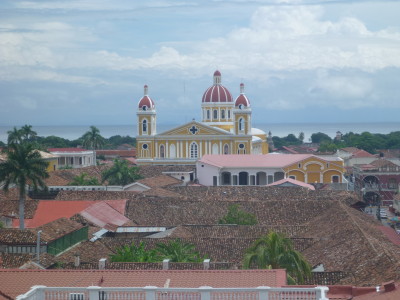 View of the Main Cathedral in Parque Central from Iglesia de la Merced.

7. Fortaleza La Polvora
There’s an old fort here in Granada which was once called the Fortaleza de Armas. It has a good view over the town and is a leisurely stroll along Calle Real Xalteva. 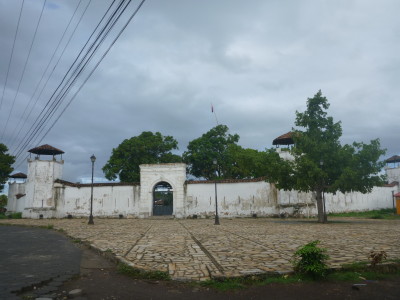 8. Convento y Museo San Francisco
This Convent is definitely worth a look just because it’s the oldest church in the whole of Central America. The weird thing for me is that I couldn’t find it as in tourist brochures it looked blue! I later found it had been repainted and I had walked past it a few times. 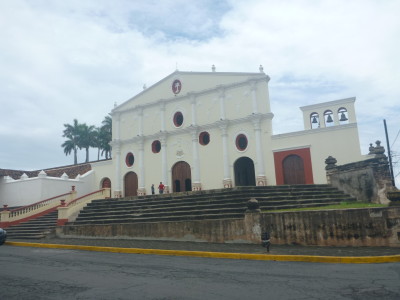 9. Iglesia Maria Auxiliadora
“Mucho Iglesias” becomes a common theme in proudly Catholic Nicaragua, with Leon boasting a load of churches, Granada almost equals it. Again this changed colour a tourist brochure showed it as yellow but it’s clearly blue and white (much like that stupid gold dress that keeps clogging up my Facebook feed). Even worse, the photo cannot be turned round so get turning your laptops on their side to see it! 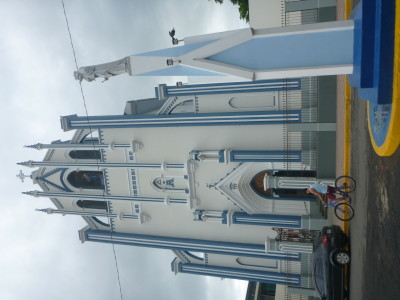 10. Post Office
As you might know I post my brother a new postcard from every country and almost every city. However in Granada it took me ages to find the Post Office as it’s just not obvious. It’s actually just round the corner from Convento y Museo San Francisco and when I got there it was packed! I had to wait for about 70 kids (no exaggeration) to post their letters before I could get my cards sent! 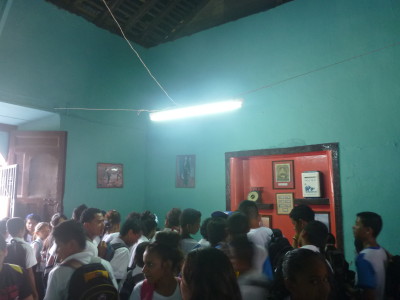 11. Iglesia de Xalteva
It had to be another church and one of sparkling colours, you can visit this one on your walk out to the Fort, where you’ll also pass the Iglesia Maria Auxiliadora. 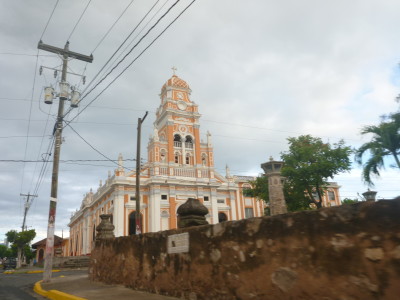 12. Calle La Calzada (Bar Street)
By night Calle la Calzada (Bar Street) is the place to be in Granada – a street full of all sorts of foreign bars and restaurants including Mexican, Irish and Japanese. Plus of course Nicaraguan food and drink! The quirkiest bit for me was Imagine Bar, which is even on a corner on a street called Penny Lane. It’s like the Hippy Corner of town and the guy that runs the bar is a nut! You pay more for your beers in here too by the way. 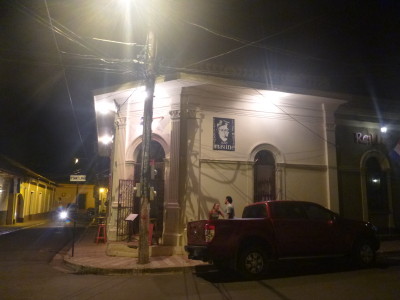 While drinking a Macua cocktail in Nectar Bar I met Brian and Jeremy from Wyoming and we ended up on a bar crawl crawl together including the Irish Pub, the John Lennon Pub and a Mexican Bar. I also had a coffee with them the day after and hope to visit Jackson Hole in Wyoming some day! Hope you are well guys – what a great night out we had! 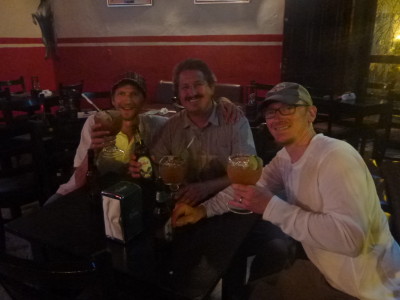 A night out with Brian and Jeremy from Wyoming in Granada.

13. Mercado Municipal
I didn’t do much shopping in Nicaragua but I had a quick browse in the market here. Fridge magnet for my Mum, postcards etc. Plus the usual mix of fruit and veg stalls. 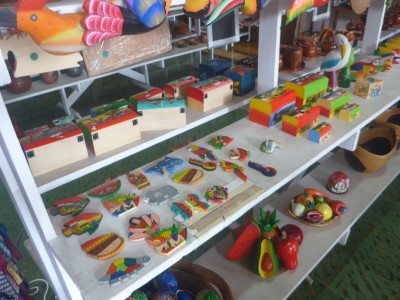 Aside from all this, it’s a funky quirky town and it’s a hard place to dislike – I totally recommend a few nights in Granada. What’s even better is there are daily long distance buses from here to San Jose (Costa Rica) and Tegucigalpa (Honduras). I also visited an art gallery and a few other places that I didn’t put on the list. 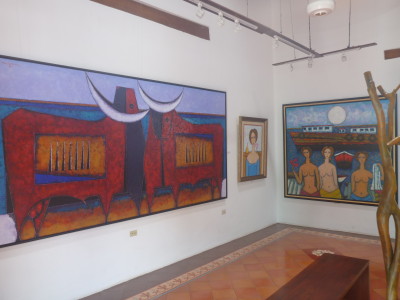 Here are my videos from backpacking in Granada, it’s well worth a few days for sure:

2 thoughts on “Backpacking in Nicaragua: Top 13 Sights in Granada”