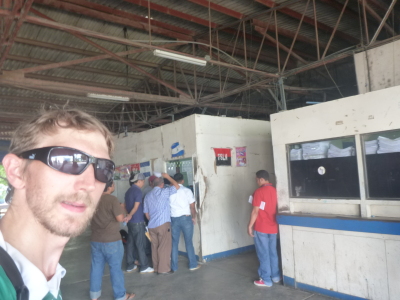 World Borders: How to Get From Honduras to Nicaragua

Almost everyone you meet backpacking through these countries, they will travel through Central America overland and we did the same. We started off in Mexico City and crossed every border overland (except for the Belize to Honduras which was by boat). After exploring Tegucigalpa and staying in the Hotel Linda Vista, I decided to head straight for Nicaragua – I spent two full weeks in Honduras in the end including a week on Utila diving. There are a few different border crossings and options, but I decided to go from Tegucigalpa to Leon by bus, and I used the company Tica Bus – one of the most popular trans country bus companies in Central America. 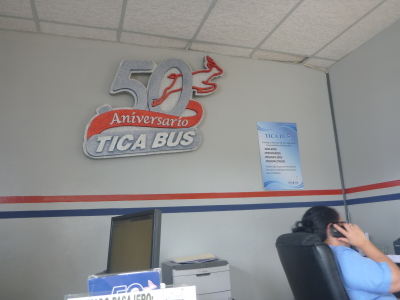 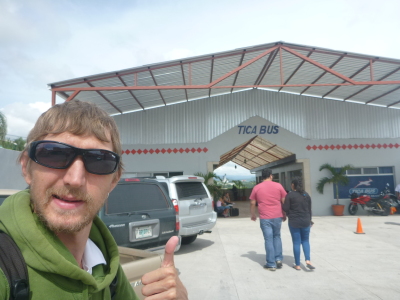 The Tica bus terminal in Tegucigalpa.

It has moved recently and a lot of the hotels and tour guidebooks (including Lonely Planet) are incorrect as they tell you it is  in the southern part of Comayaguela – it’s not. The Tica Bus terminal is now near the airport and I used a taxi to get there – around 7.30am. 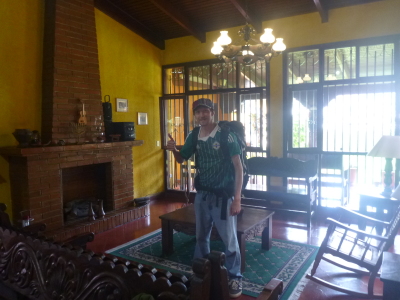 I went up to the counter in the Tica Bus terminal and ordered a one way ticket to Leon in Nicaragua. I decided to stop off in Leon first – a city famous for its churches, rather than head straight to Managua, the capital city. The only thing about this decision – it is the same price to get to Leon as it is to go all the way to Managua (an extra hour or so in the bus). My bus ticket cost 420 Lempira (almost exactly $20 US). Payment is in cash onyl (USD also probably accepted). You’ll get issued with an exact seat number and ticket. I got my ticket at 8.15 am and the bus was due to leave at 9.30 am. As it got closer to 9.30 am, the bus tickets sold fast and eventually that bus was full. 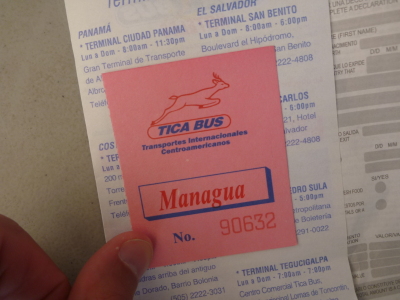 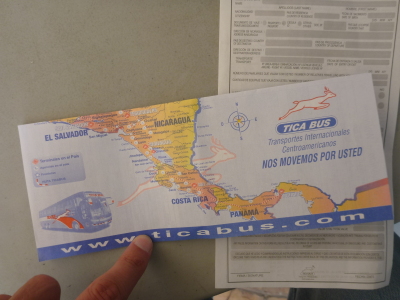 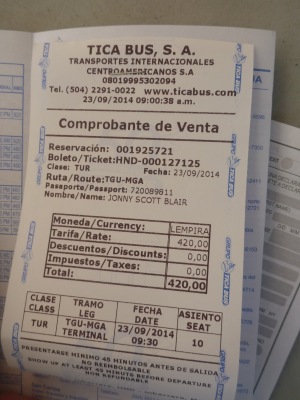 Between 8.15 and 9.30 I just stayed in the bus depot and had a coffee – I’d already had my breakfast at the hotel. You can go out into the nearby streets if you want and look for a coffee shop/cafe that is cheaper than the Tica Terminal but I had my big bags with me, my notepad out for blogging and I was happy enough. The bus arrived just after 9.30 am, with passengers already on it. I assumed they had travelled from San Salvador or San Pedro Sula. 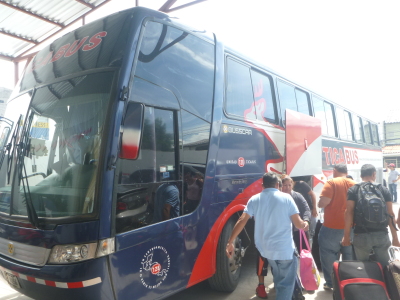 The bus from Honduras to Nicaragua.

Leaving Tegucigalpa, Honduras
I boarded and we left the capital city Tegucigalpa a bit later than expected, around 10.17am. The journey down to the border was smooth and scenic. I was next to a Honduran guy on the bus and we chatted a bit before I turned on my iPod. 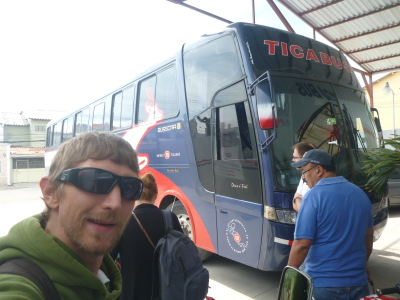 Tegucigalpa to El Guasaule
Just before we get to El Guasaule, one of the two guys working on the bus comes and hands out immigration forms and asks for passports and money. There were about 2 or 3 other foreigners on my bus as I noticed and they had done as this guy had said, by handing over the money and their passports. For the meantime I didn’t. I always prefer to do these things myself, as you normally save money and get the real experience of doing the border crossing yourself. Local Hondurans were being charged $5 US to cover the border charges, and foreigners were being charged $15 US. (these are the charges both to leave Honduras and enter Nicaragua). 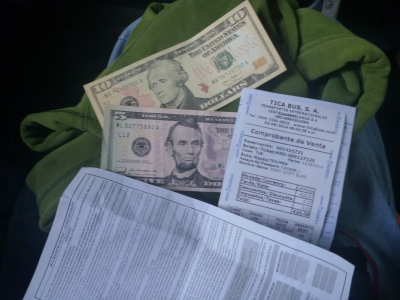 When you travel in Central America, the border guards can try to rip you off, as happened when I first entered Guatemala from Mexico, and when I crossed into Honduras from Guatemala at El Florido. I have heard that if you get off the bus and try to do things yourself, you may save $3 US and get it for $12. On this occasion, I oddly opted just to pay the money and be done with it. I kind of wanted to use up my Lempiras at the border by grabbing some snacks and drinks. 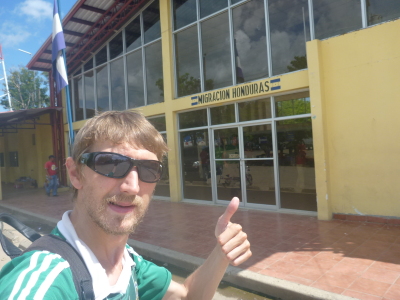 Leaving Honduras at El Guasaule
When we stop at El Guasaule, the guy on the bus takes the money and passports in one quick visit to the immigration offices to get all the stamps done. Everyone on our bus had given him their passports. So if I had chosen to do everything on my own, I probably would have saved $3 but would have had to do the queuing myself and probably hold the other passengers up. Our passports are all given an exit stamp, but not in our presence. 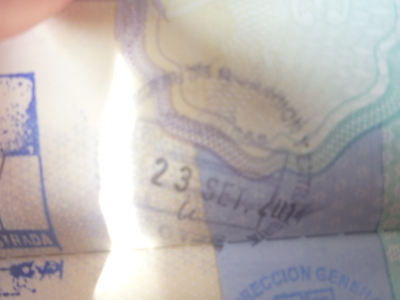 I used the time to make videos at the El Guasaule border exit point, take some photos and buy some drinks and snacks with my remaining Lempiras. I would wait until arriving in Nicaragua before getting my Cordobas. There are lots of kids and money changers hanging around the border – check their rates before changing money and be on the lookout for potential scams and thieves too. 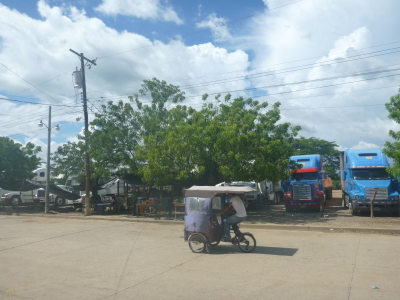 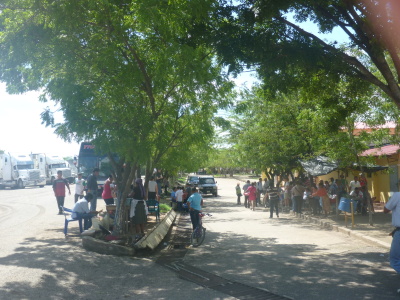 After about 20 minutes, we get back on the bus and drive across the border to the Nicaraguan arrival point, which is also called El Guasaule. 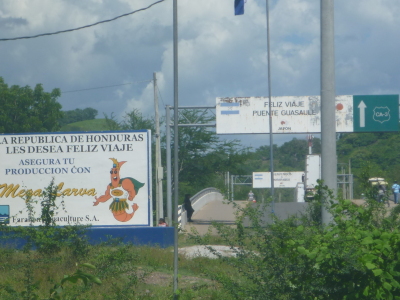 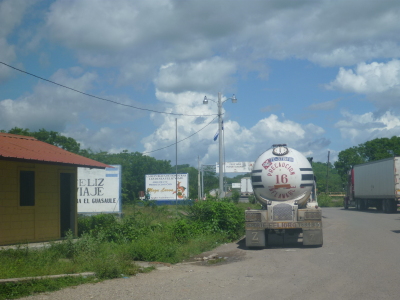 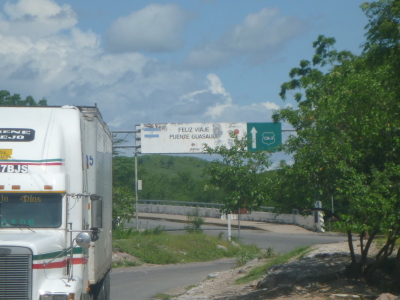 Entering Nicaragua at El Guasaule
We arrive into the Nicaragua immigration point and it is much more strict. A long queue to check every bag. We have to take our bags off the bus and walk up to the queue. 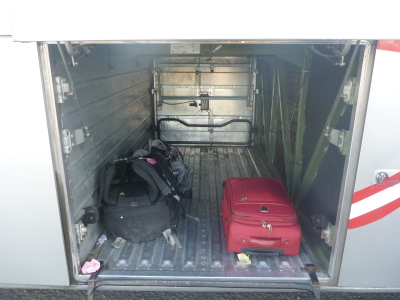 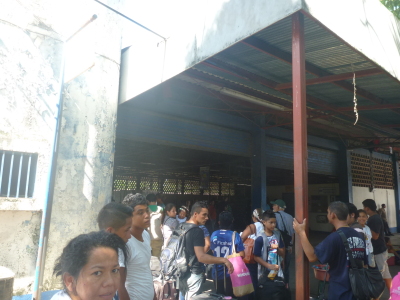 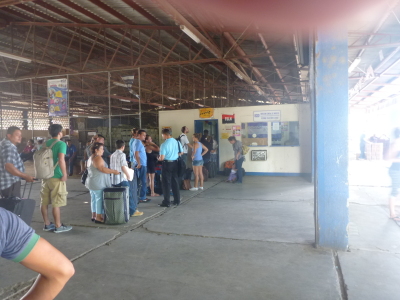 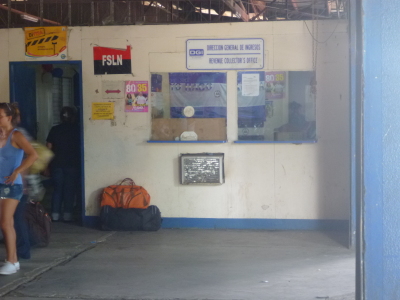 It takes around 40 minutes to get through the bag check. At the same time, our passports have been taken and checked and rather than getting an actual passport stamp for entry into Nicaragua, you get a Tourist Card. 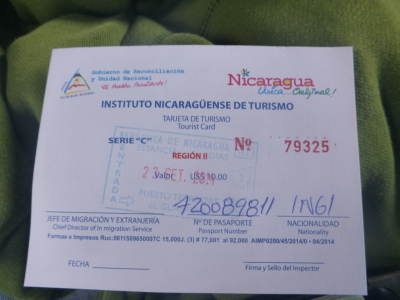 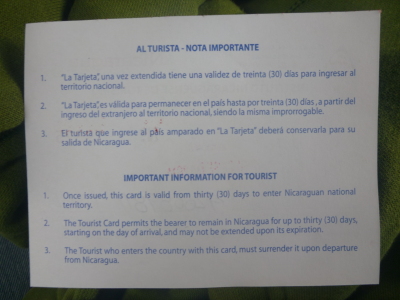 Tourist card for Nicaragua – back.

This tourist card is kept for the duration of your stay in Nicaragua, and you surrender it on exit (I later left into Costa Rica). 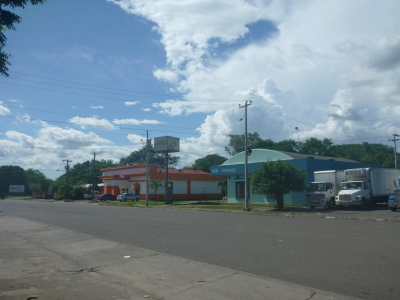 Nicaraguan side of the border.

El Guasaule to Leon
After that we load up our bags again, get our passports back and head towards Managua. We have a stop for some passengers to get off at the city of Chinandega (which I also considered doing before choosing Leon). There is torrential rain everywhere. 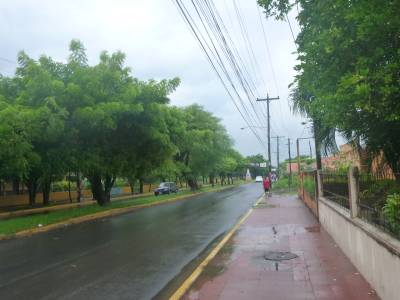 A wet arrival in Leon, Nicaragua.

Around 4pm and before it got dark, we arrive in Leon. The bus drops you off at a petrol station on a highway a few kilometres from Leon. Having just arrived in the country, I was in no mood for a taxi and brushed aside offers from taxi drivers and just walked it to the city centre. I didn’t have a hotel or hostel booked, so decided to head to one of the first ones I saw. After about 30 – 40 minutes of walking in the torrential rain, I decided to stay at Casona Colonial Hostel which did the job! The journey had taken a full day (daylight wise) and I was now safely in Leon, Nicaragua. 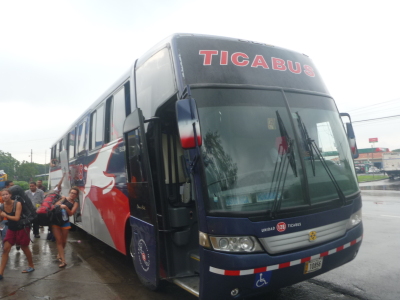 Arrival on the edge of Leon, Nicaragua. 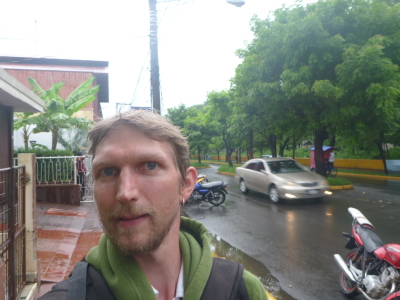 Walking through Leon to my hostel.

Leon is a great city to explore home to some cool churches with volcanoes and beaches nearby.

Here are my videos of the journey from Tegucigalpa to Leon:

14 thoughts on “World Borders: How to Get From Honduras to Nicaragua (Tegucigalpa to Leon)”