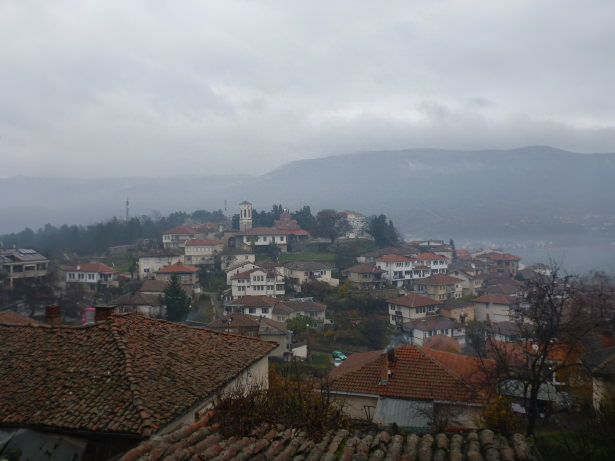 The town of Ohrid, Northern Macedonia.

My apologies to my Northern Macedonian friends for this hint of negativity but Ohrid will not be remembered too fondly by me. In complete contrast to Northern Macedonia’s pumpingly cool capital city, Skopje, the town of Ohrid sticks out as a horrible concrete jungle of a seaside resort trying to be more and more commercial by the day and lose the real reason why it is here – its charming setting over an enchanting lake that sends you south into Albania. 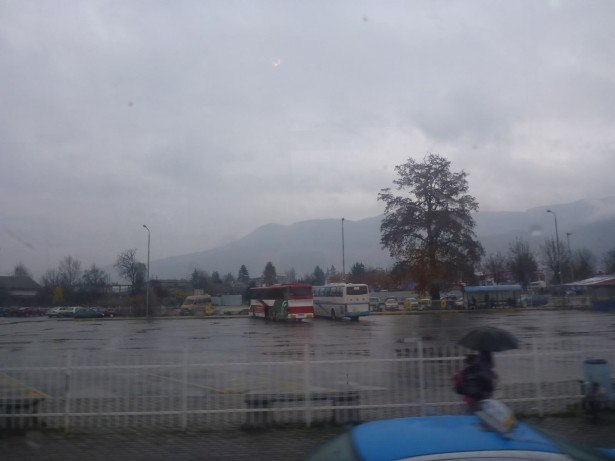 I had been recommended Ohrid by so many people so I put it as a must see on my Northern Macedonian adventure and after a few nights in Skopje I headed down here by bus choosing the cosy Mimi Apartments as my base. Off to explore this gorgeous town. But yet not. 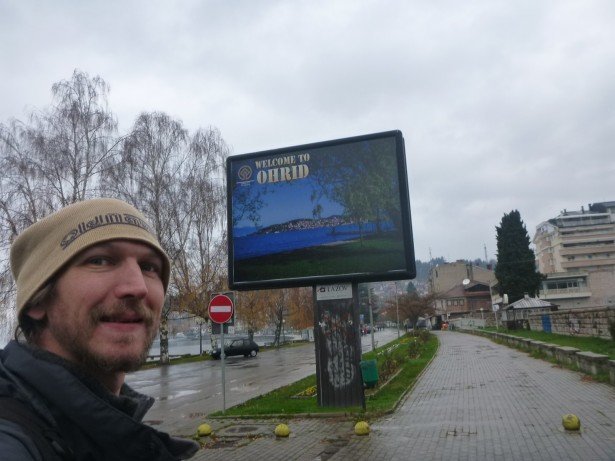 Cobbled streets work their way up to an ugly line of awkward housing, behind which lies an overpriced fortress offering not much of a view. The lowlight however was the 4th Century church and Basilica which has been partly built over and obstructed by wires, concrete and pure ugliness. A real backpacking eyesore. 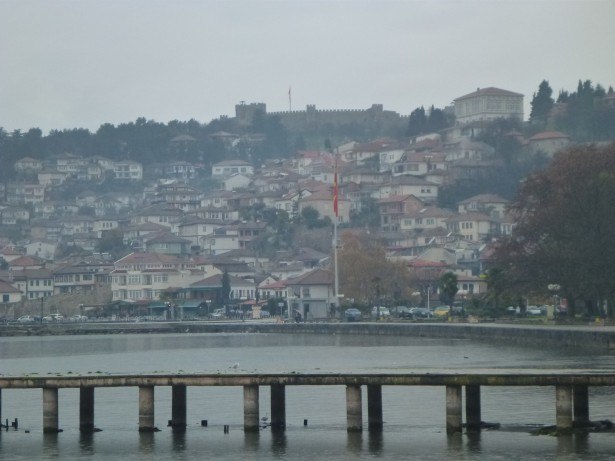 The town of Ohrid in Northern Macedonia

The Basilica itself also charges entry into the grounds (who pays when forced to see a church? It should be voluntary donations), yet your walk through rubble, uneven paths, puddles and mud reveal the ugly intentions of commercialism and the lines of flats or apartments being built to obscure the views, bring some money to the already popular town and give this backpacker a real shock. The town of Ohrid promises much and gives out little so here are my bottom 10 lowlights which I recommend in case you don’t believe my judgement and want to stop here in Northern Macedonia or on route to Albania (a common reason to hang out here in Ohrid). 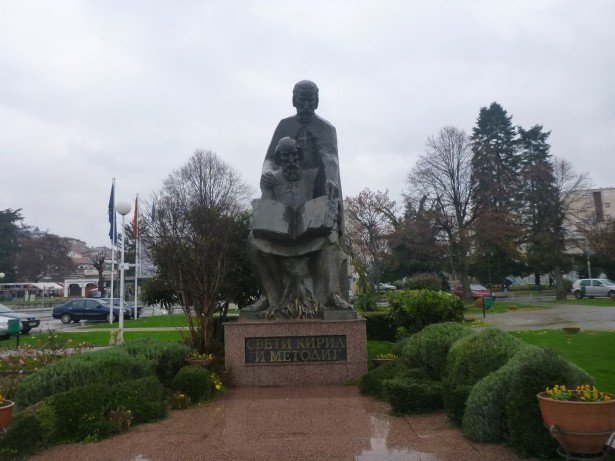 1.Car Samoil’s Castle
Over hyped and over priced this elaborate castle and fortress sits on the hill high overlooking the town and lake. 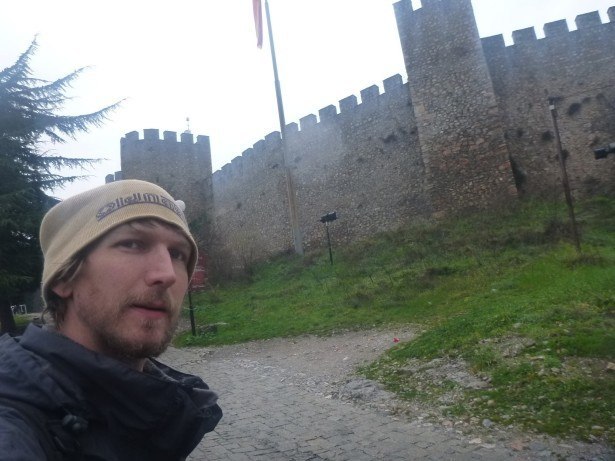 2.Gorna Porta
The Upper Gate and the entrance to use when walking back down to town from the top of the hill. 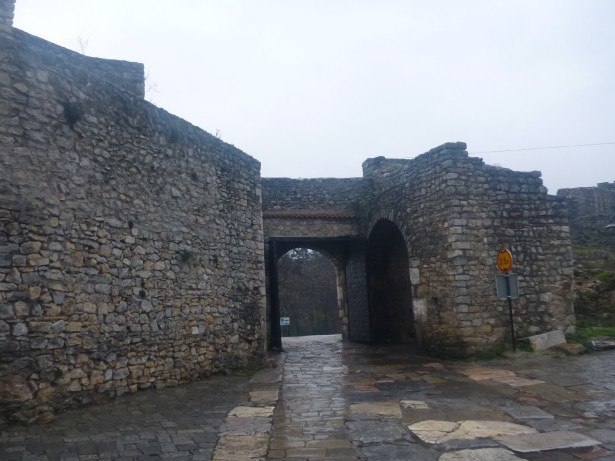 3.Church of Sveta Bogorodica Perivlepta
This is a 13th century church inside the upper gate. It was closed, slippy and wet when I was there. Good luck getting inside and exploring it. 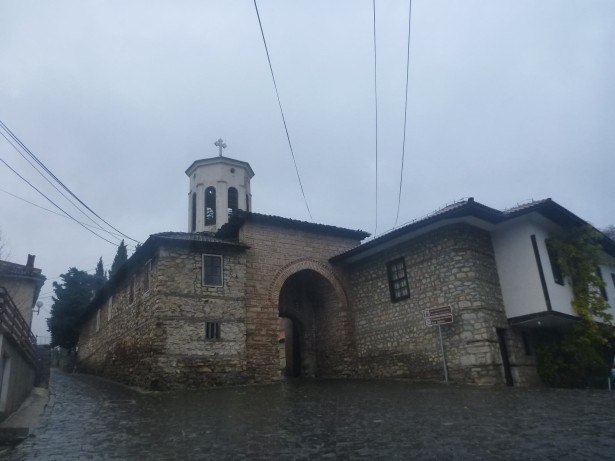 4.Roman Ampitheatre
OK so maybe the backpacker snob in me just hung on the fact that this is just not impressive at all. An ampitheatre on the walk up through the town? Who cares if it’s Roman? Most of them are. Unless Liam Gallagher rocks up and starts singing “Stand By Me” on a live gig in this mini outdoor arena, my memory of this ampitheatre will hardly live forever. 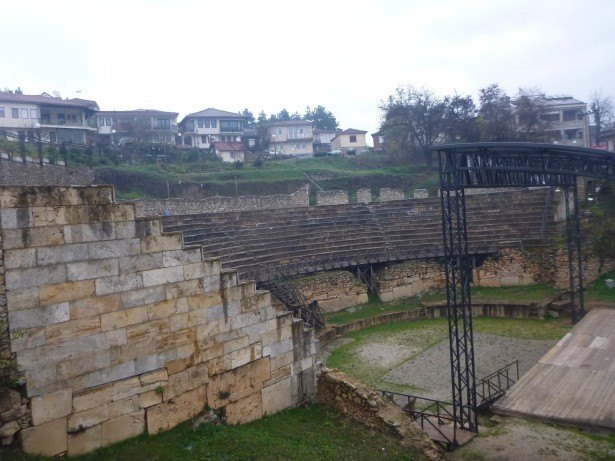 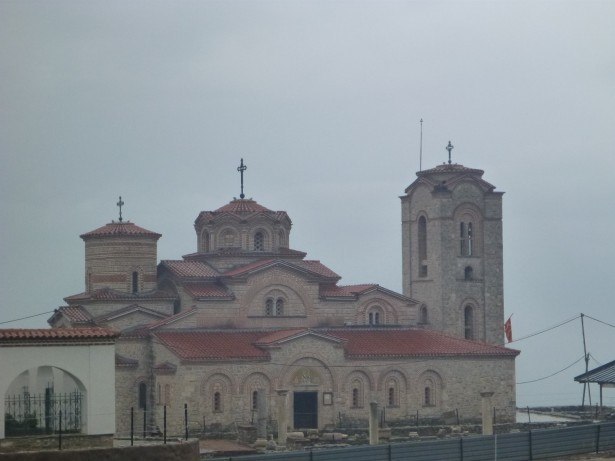 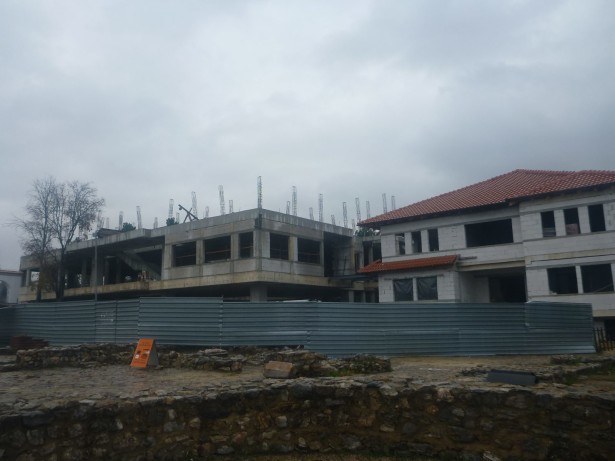 Ugly concrete near Plaosnik in Ohrid 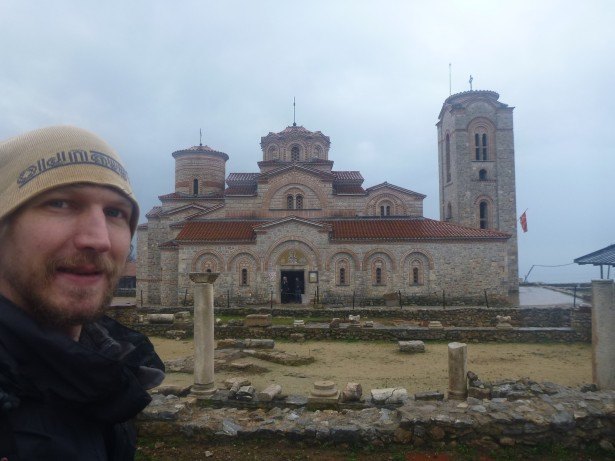 6.The Fourth Century Church
At last something cool in Ohrid, you think. But then again when everything around you has given this idea of a new fake Benidorm, it’s hard to be inspired here. The foundation are ancient though and it is well restored. 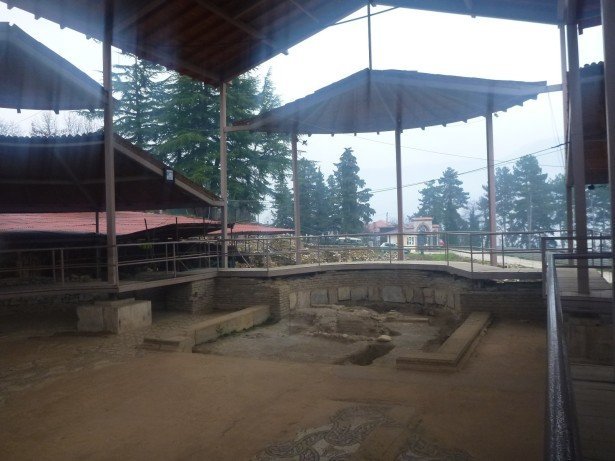 7.Church of Sveti Jovan at Kaneo
This church boasts the lake view. I was there off season for sure, but the walk round was full of unfinished apartment block in grey attire. I’ve seen better and so have you. 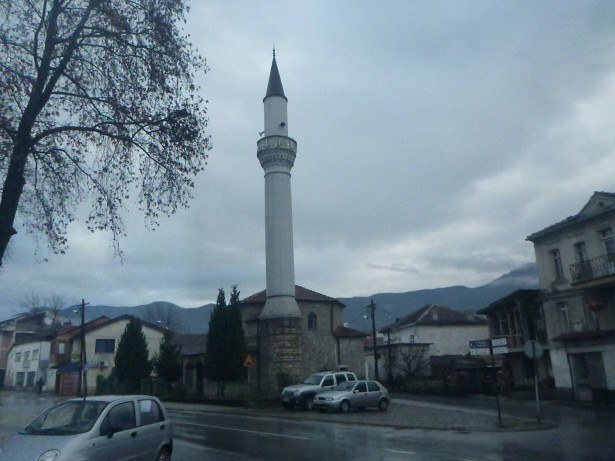 A mosque in Ohrid, Northern Macedonia

8.Sveta Sofija Cathedral
Yet another church makes the bottom ten, well actually it’s the Cathedral. As the only tourist backpacking it, I did have a look inside. 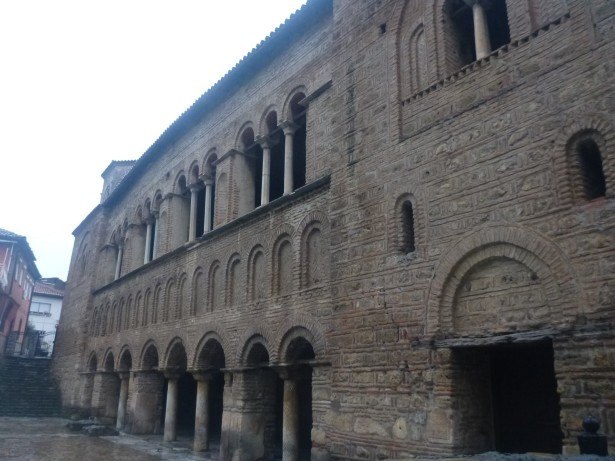 9.Ohrid Market
Get your fix of cheap vegetables and clothes at the market in Ohrid. 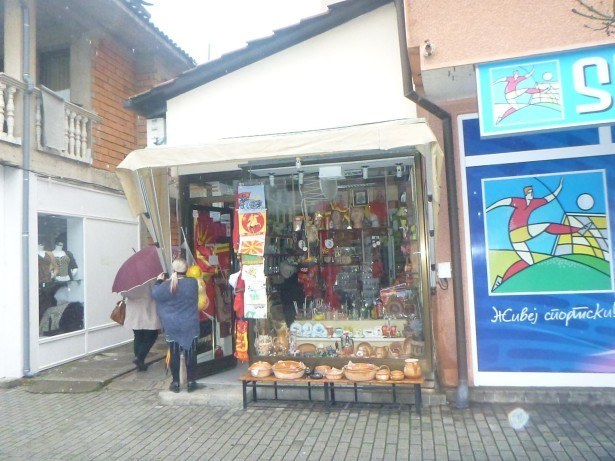 10.Ohrid Harbour
Apparently in summer this place is a hive of tourist activity. As the sun beat down on a December day, I stared at the sky, thanked God the fact I was the only backpacker in sight and really wondered what all the fuss was about. 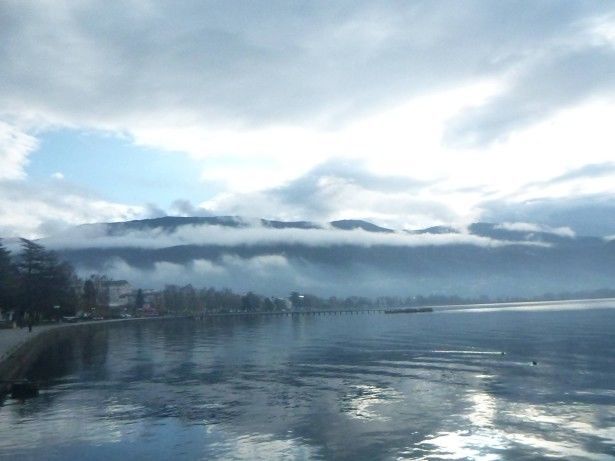 So once you’ve hit up that bottom 10 and maybe a mosque and a bar, it’s time to head on – Albania could be a good shout from here. Northern Macedonia also borders Greece (which contains most of Macedonia), Bulgaria, Serbia and Kosovo which I chose next. 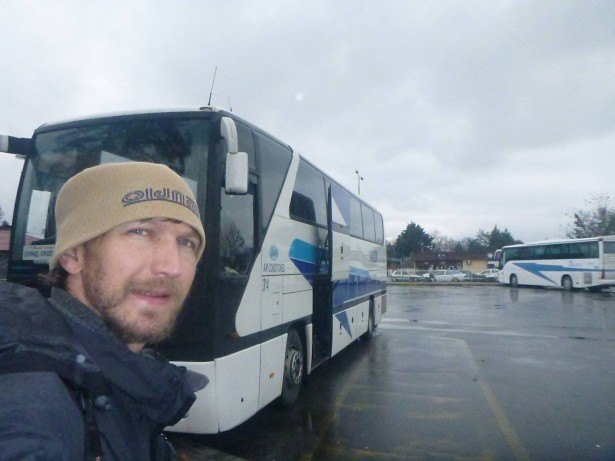 Next bus out of horrid Ohrid please!

I’m sorry to the people of Ohrid if you are upset I didn’t like your town. I can’t pretend I enjoyed it – the people were nice enough but the sights over hyped, the churches destroyed by commercial buildings and the number of pure ugly apartment blocks and hotels is seriosuly disturbing. I loved partying in Magaluf but I didn’t expect this place to be halfway to that town when there was beauty here destroyed by tourism and commercialism. Barney Rubble would have loved it. 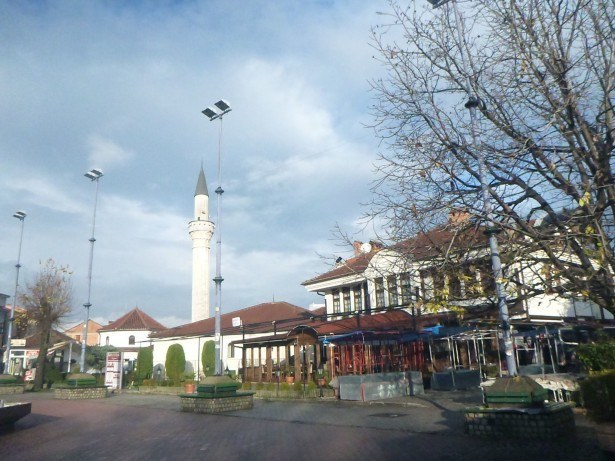 Here are some of my videos from Ohrid: