“Where do you go? Buttoned in your favourite coat, stepping out till a different world… And you might be home late” – Ocean Colour Scene.

Before we get into the William Baekeland saga, let me introduce your author for this book, Harry Mitsidis. 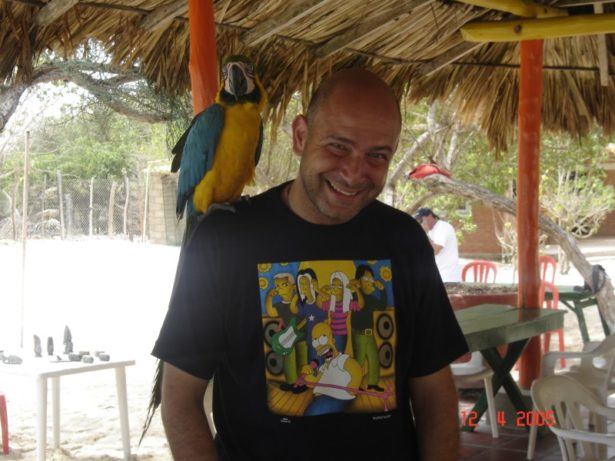 Author of “The Curious Case of William Baekeland” – Harry Mitsidis

If you are a long term tourist like me, names and figures such as Harry Mitsidis require no introduction. Harry is a man who visited every country in the world (in both his own and the Untied Nations classification) by the age of 35. It is some achievement and deserves applause and respect. Harry Mitsidis cracked the shebang and more, and he continues to travel to unusual parts of the world often earning the moniker “world’s most travelled person”. 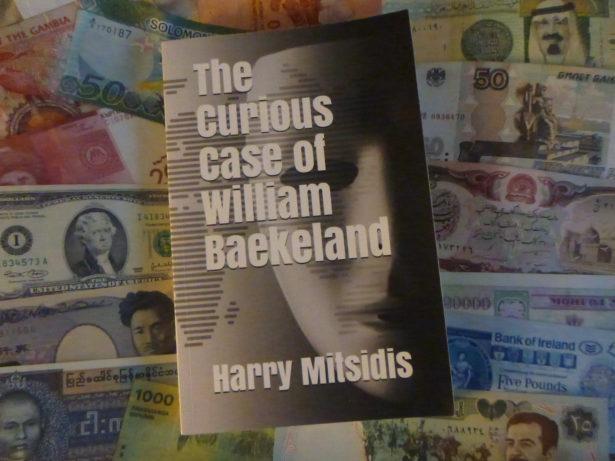 Harry Mitsidis also started a website called The Best Travelled, which became Nomad Mania. It is a website which I joined in 2012 around the time I transferred from hobby blogger to professional travel blogger. On that website you can plot which cities, countries, regions and UNESCO world heritage sites you have been to. It is a great site, with its only fault for me being that it respects global authorities (like UN, FIFA and TCC) too much and fails to recognise genuine countries from my own list, such as Uzupis, Podjistan, Austenasia and Romkerhall. That said, I have noticed that an increasing number of fellow tourists follow the same global entity classifications laid down by UN, FIFA and TCC. Enough of that, here is a story of a kid called William Baekeland who wanted to whackpack to 12,000 places. 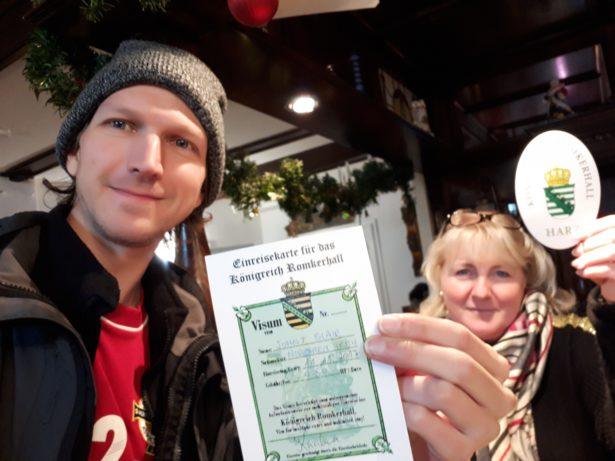 Around 2017, I heard tale about a scandal in the travel community. While I usually don’t like most of the opinions shared by my fellow tourists, I respect them all for their love of travel. Beneath the bullshit there is a togetherness and a need to help each other. My friend Nate helped me in 2016 ahead of my Uzbekistan to Afghanistan adventure, another traveller Mike Kendall gave me tips on Togo and Benin whilst Eduardo Gallardo (who backpacked Saudi Arabia with me) gave me good tips on the Pacific Islands. I also send emails and messages daily supplying my own tips to tourists who write to me through my blogs.

As a veteran travel blogger, I always seem to get email after email and message after message, daily, on these topics: 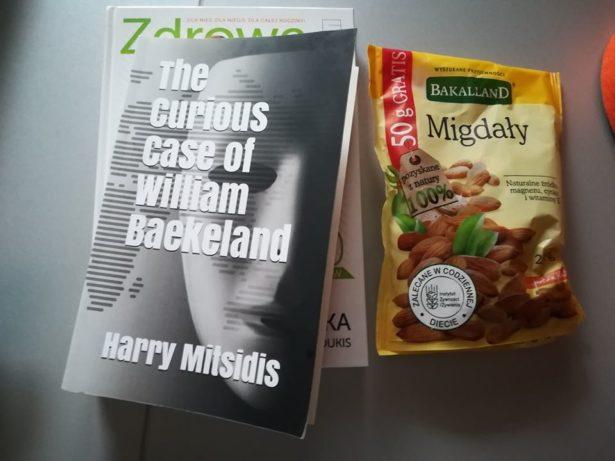 I encountered a truly peculiar character called William Baekeland around 2016. It was around the time of my own severe mid life crisis, depression and suicide bid. The irony being that the cruel nasty liar who I had the misfortune to meet would have made a super wife and accomplice for this fellow liar and conman William Baekeland. They would be a brace of peas in a pod.

Personally, I saw William Baekeland as a posh, stuck up young inexperienced travel wannabe. A comment from him once boasted about a trip to Iraq or Syria and how he could organise it and not care about the money. Another comment claimed Aer Lingus love him so much they send him photos of his own flights taking off and landing. It was laughable. I remember replying to one of his Syria posts with something like ‘too mainstream, mate. Those are easy countries to visit. Bet you have never been to Austenasia or Podjistan.’ He was somehow silenced as he realised his wacaday trips to Syria certainly didn’t impress me much. He probably had to Google Podjistan and Austenasia…make that Definitely.

Then a short while later he was also commenting on one of my lists, saying he agreed with my classification of countries. This felt odd as most fellow tourists I meet do NOT count countries like Kugel Mugel, Sark, Austenasia, Adammia, Romkerhall or Narnia as real countries. However, I am a nationalist and separatist, needing, wishing, wanting and loving every country to be more nationalistic and separate. To have clearer borders, their own autonomy, their own currency and so on. It would be a dreamlike peaceful world. 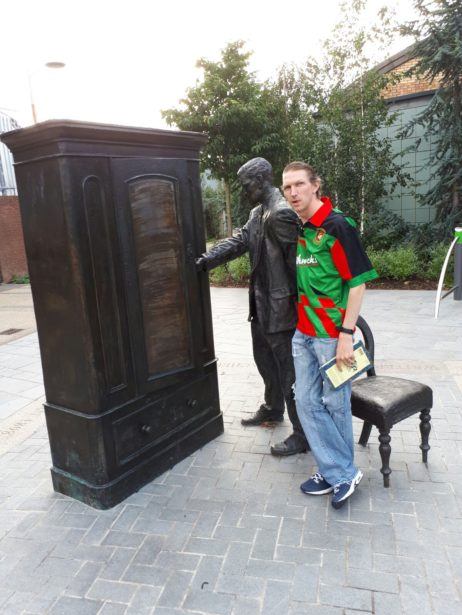 Crossing the border from Northern Ireland to Narnia

When I saw him posting a photo of him in Business Class on a Dublin flight, I laughed at his buck eejitry. But I had never met William Baekeland. He added me on Facebook around 2016-2017 and we exchanged a few messages and comments but that was it. I usually don’t connect well with fellow tourists rich in money and flying first class. Ye can shove yer champagne breakfast up yer hole.

I also became wary and suspicious of “Billy Bikeland” due to his ridiculous name. It sounded fake. He claimed to be Irish, yet spoke like a posh English person on his media interview with Ric on Counting Countries. His name doesn’t sound remotely Irish or British!! 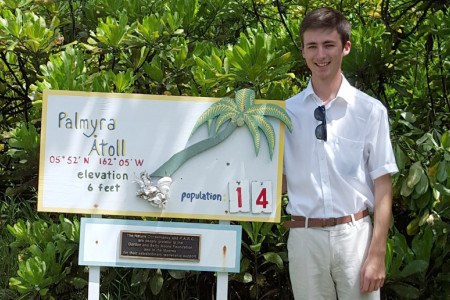 Billy Bikeland posing in a ridiculous posh suit in a place that sounds like Syria, but isn’t.

Then a scandal emerged. It was via Ric Gazarian and his excellent Counting Countries Podcast series where I learnt about the Turmoil in the Travel Community.

This wannabe upper class fake Irishman was exposed to the world. He’s even less Irish than Tony Cascarino!! Cascarino’s story however is a fantastic one – despite never owning an Irish passport or having any Irish blood roots, Cascarino blagged his way to two World Cups, one Euros and 88 caps!

In 2018, Harry Mitsidis released this book on the Bikeland story. I have decided that I didn’t want to give too much away about the book in this mini review. This is because it is a fantastic story which should not be spoiled before reading it.

The book is a travel, mystery, suspence thriller. I could imagine it being made into a film with Hercule Poirot, Jonathan Creek and Colombo all pitting their wits to find the solution.

I hope someday the book is made into a film.

William Baekeland’s story is widely known in the wacaday travel community, but if you are unaware of it – then this book is for you.

I finished the book in less than 24 hours, including having slept for 8 of those hours! A super read!

And finally, as I was reading this book (in November 2019), there were a few crazy coincidences:

1.I started readin it flying out of Dublin (Where Billy Bikeland claimed to live).
2.The next flight to my Warszawa one was heading to Birmingham (Where Billy Bikeland was allegedly from).
3.The next day in Poland, just after I had finished the book, there was a packet of Baakaland cereal on a desk in the office I work in. A crazy coincidence!!

2 thoughts on “Book Review : The Curious Case of William Baekeland by Harry Mitsidis”