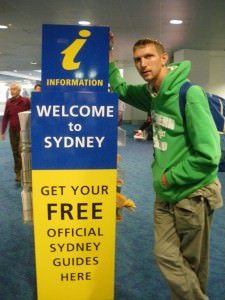 Arrival in Sydney, Australia in 2009 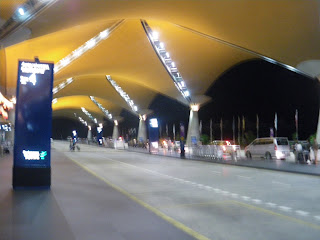 Without flinching an eyelid and just like any other day of your life, we arrived in Sydney, Australia. Equipped, Natalja and I with simply a passport, a one year visa and our possessions, we slipped casually past border control and into the realms of Australia. That was late October 2009. At the tender age of 29 I finally entered into the world of Australia. That day, wearing a warm, sweaty, Northern Ireland overall, it felt a bit unreal at first. We were in Sydney, Australia’s most populated city.I have met many many Australians in life, yes, even living in Northern Ireland. There was one Australian lady called Michelle who once worked in Steenson’s with me. While living in England I met a few more (Susannah Hardy, Hannah Tornianen, Emma Broomhall) and while traveling I met loads (Simon Panossian, Zizis, George Sutton). It was a place I always wanted to visit, but the time needed to be right and I didn’t want to go there for a few months, it had to be long term. 2009 has been a bad year in many ways and this made me need to leave the UK. I met a lot of nasty and rude people in my final year in Bournemouth and it was time to move on. I’ll name check some of them in the future, but Daniel Hancock and Iain Robertson are just two of them. 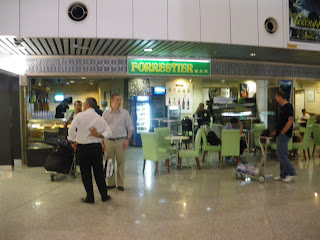 The trip to Australia would never be direct. The original plan was to live in Taiwan, well that was the first step away from Bournemouth, England. From there a handy venture led us to Singapore and Malaysia, before finally ending up sitting at Kuala Lumpur International Airport one night for the night flight to Australia. We were running late to the airport. I much prefer to get to things on time, Natalja is much more relaxed and prone to miss things (e.g. trip to Bondi Beach, Harbour Bridge and Petronas Twin Towers). Either way we made it to KLIA about 45 minutes before the flight. We had a rush to find our terminal, it wasn’t very clear and this airport is massive. After asking about 5 people, 4 of whom gave us the wrong directions and sent us to Dutch Air. Our actual airline was Malaysian Airlines, which I have used quite a few times. I love the airline food on these long haul flights, and the fact that drinks are unlimited. You might as well take advantage when you have the option. Before we boarded the plane, we had time for a quick cup of tea and half a Mars Bar each (it was just to use our our remaining Ringgitts). We did this in a upstairs bar, where I had been before in 2007. It was above the Forrestier Bar, where in 2007 I watched live Malaysian music before boarding a flight to Beijing. I stared at the same bar and seat I sat at that time, pondering on whether I’d ever be back there and how life had brought me back to the same place 2.5 years later. 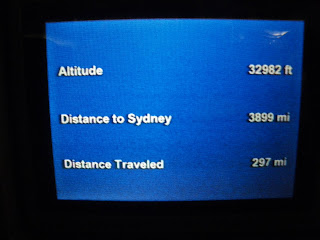 Soon we were boarded the flight – I loved walking on board that night – a massive Boeing 747 – a Jumbo Jet! I looked up the stairs and wondered what was up there, we were obviously in economy class, and had free TV, food and drink. I was a bit tired though, so decided still to have my sleep as long as I was around for unlimited tea, water and the two main meals. I wasn’t sure of the time difference or the flight time to Sydney. Our flight left Kuala Lumpur, Malaysia and Asia far behind at 22.10 pm one night. By 9 am the next day we’d be in Sydney, Australia. 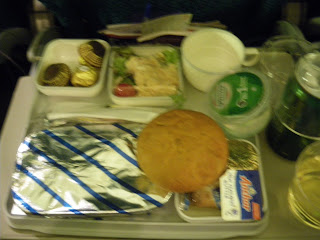 On board we were given two meals and two snacks. The first snack, just after take off was a packet of nuts and an orange juice. This was followed by a beer or wine. I chose a tin of Carlsberg. The selection was crap, but free. After this I had a quick read of my Australia Berlitz Guide (I normally buy Lonely Planet, but they are getting ridiculously dear, and some of the best things aren’t in there, so I just buy the cheapest guides these days – and Berlitz were £4.99 each and buy 2 get a 3rd free – I own Malaysia, Singapore, Australia). After that I fell asleep, until I was awoke for the first proper meal. It must have been around 2 am. The food was a main meal of beef, spuds, carrots and beansprouts. Plus cheese and crackers, a fish salad, a roll and butter, a white wine, a beer, a water and unlimited tea (I had just 2 cups though). I devoured the lot and went to sleep again! Next I knew we were woke up again, probably about 6 am for the second meal. It was all sweet stuff! A banana yoghurt, some fruit, chocolate muffin, a flapjack and a cup of tea. I spoke to my neighbour, a Dutch guy at this point, before nodding off again. After this we were awoke for juice and an ice cream. My iPod was on and I played the obvious “Australia” songs on route. This featured Men At Work, Savage Garden, Kylie Minogue and Jason Donovan. I did look for Rolf Harris, but had none!

I also even threw in the anti-Australia song by the Manic Street Preachers, as its still a good tune, even if it was about running away as far as possible, which is kind of what I’m trying to do. I stayed awake the rest of the flight and was suddenly looking forward to seeing Australia. 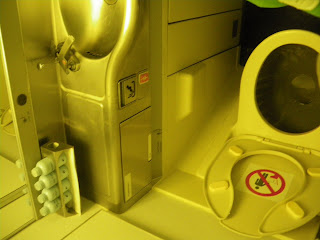 We had never planned to end up in Sydney, in fact it was only because it was the cheapest flight to Australia that we chose it. I was much more up for Perth, Adelaide or Melbourne. But Sydney it was to be! I even had a friend living there, Elodie Ho, a French lady who had worked with me most of the summer at Best Break for Bournemouth Borough Council. She was in Sydney and we could meet her. I had a number of other friends in parts of Australia. Its a big country, and in late October 2009, we touched down into the Sydney sunshine… 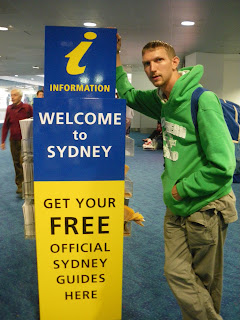 There was a slight delay in getting our bags – the airport was so packed I couldn’t believe the queues. There was no problem at Passport Control for either of us. A stamp saying “IMMIGRATION AUSTRALIA. Arrived Sydney Airport” was all we got. We already had Working Holiday VISAs for Australia (initially these are just valid for one year, and cost around £90). After this we saw the sniffer dogs searching for drugs and soon we had both our main bags. My total belongings came to less than 27 kilograms, my main bag being just 16 kilograms. We turned round and didn’t particularly want to get checked again going through the machines and as luck would have it, a lady checked our stamps and sent us through to the express queue to save time and hassle. That was great as it meant we had finished our bit of traveling for now and could finally relax in the land down under. 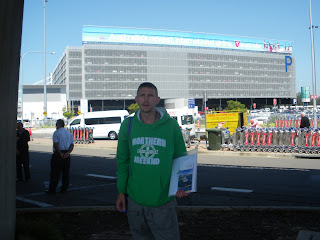 Once out into the main airport I picked up a free Sydney guide, with coupons in it. About a week before, on the internet I had randomly booked us 4 nights in a hostel, before we would decide where to next. It was a totally random choice, but I opted for the “Chilli Blue” hostel in the King’s Cross area. I knew nothing about Chilli Blue, or the areas in Sydney. I didn’t even know that King’s Cross was a busy/popular area. It was all just random. A guy I met in Kuala Lumpur (Mick from Manchester) had told me there was a great wee “sports” bar in Kings Cross that had live football and the area was fairly central, so at least I knew that much. I had already 200 odd Australian Dollars on me, which I got from the Post Office in Boringmouth the day before I left England. I spent my first ever Australian Dollars at Sydney Airport, choosing a bottle of water and a Snickers bar while we would wait for a bus to the hostel. The price of this astounded me straight away: 6 Dollars! That’s about £3.20 I thought. Having just been in Malaysia, Singapore and Taiwan, Australia was sure to be a test for the wallet. The same two products in Taiwan would have cost me 40 pence!! 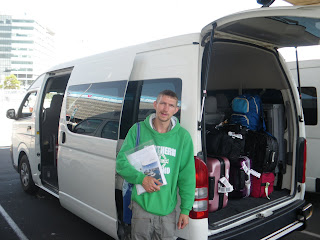 Ouch and it was already a test for the wallet! As a traveler I always try to wear lots of clothes and have stuff in my pockets while on trains and planes etc. This is normally cos my bags are full. wearing the bulky Northern Ireland fleece jacket was already a mistake. The warm, hot Sydney sun was out, and people were right – Australia is a hot country. Even though we had just come from 3 other hot places. We were still jet lagged and needed to get back to the hostel. It was early morning so I didn’t care how long it took us to get back to the hostel. The slowest cheapest way was walking obviously(!), but in this heat, with these bags and with the jet lag there was no point or way that was happening. We decided on a “shuttle bus”, these are not direct buses or public buses. basically they are mini buses for travelers. The driver gives you a rate depending on whether the bus is full or not. We said we wanted to wait till his bus was full, and this would be 14 Dollars each. That gave us a bit of time to relax and wait until the shuttle bus filled up, with other travelers. 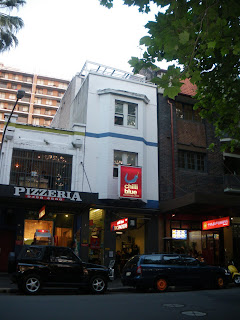 Our driver was Chinese and he had a cigarette while chatting to me and taking a photo of me. In this time two German travelers arrived, a local Australian lady and finally we had the 9 people we needed to go, and get the Shuttle Bus to King’s Cross. I’m not sure which route the driver took, but we were the second last stop. He knew of the Chilli Blue hostel, which was on Victoria Street. I slept for 10 minutes on that bus, I also made a video and checked out some of the sights, my first glimpses of Hyde Park and the city centre of Sydney. After a nice relaxing bus journey through Sydney City centre (where I chuckled at the sight of a ‘Castlereagh Street’) we were right outside the Chilli Blue hostel! And in we went, not knowing the world ahead of us. It was to be interesting and exciting and from this moment out the memories of “Chilli Blue” will live forever, definitely in the top 5 hostels I’ve ever stayed in, and I’ll go into that in detail more. For now, it was time to sleep in Sydney. We were in Room 12, which we shared with Martha, a Colombian. Jet lag was kicking in…


VIDEOS TO BE ADDED WHEN I CAN!!

8 thoughts on “Departure from Malaysia and Arrival in Australia”