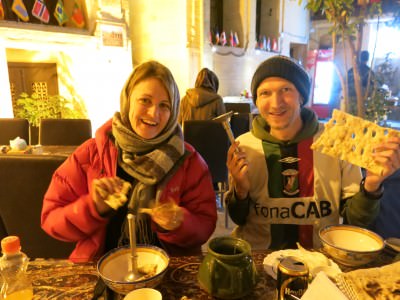 My “Christmas Dinner” in 2013 came in the form of local Iranian dish Dizi while I was backpacking in Iran. We were almost at the end of our month in Iran when we arrived in the city of Shiraz. We were there to see the city itself, as well as visiting Marvdasht, Persepolis and Naqsh-e Rostam. 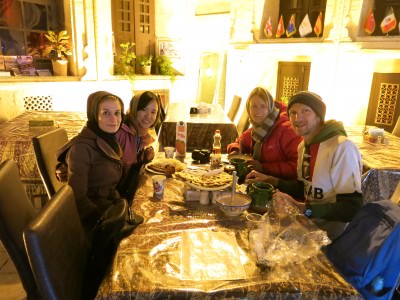 Our dinner table in the Niayesh Hotel, Shiraz, Iran.

In the hotel, the Niayesh Boutique Hotel, which was more hostel like inside and had a massive social courtyard (and notoriously slow wi-fi) we met another traveller while talking to the reception staff. She overheard our conversation, saw my Northern Ireland shirt and heard my accent! 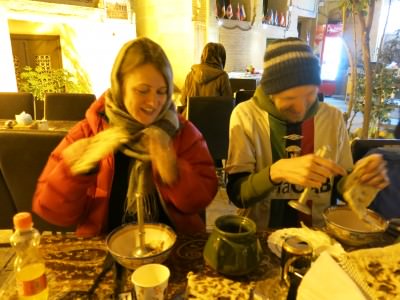 Eating Dizi with Diane from Northern Ireland on December 25th 2013 in Shiraz, Iran.

It was Diane Moffitt, who by complete chance was from Omagh in Northern Ireland!! Yet another crazy coincidence on my travel journeys. 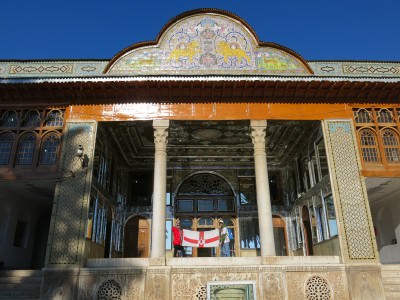 Touring Shiraz on Christmas Day with Diane, and my travelling Northern Ireland flag.

We toured Shiraz with Diane on Christmas Day, being in a Muslim state we tried not to remind ourselves it was Christmas Day, but the hostel had a small Christmas tree up and we decided on dinner together as it was our last night with all 3 of us there. Diane would head to Bandar Abbas the next day and Panny and I were leaving two days later. 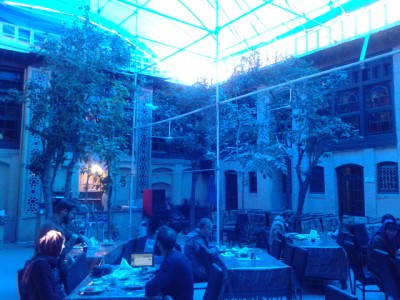 Courtyard in the Niayesh Boutique Hotel in Shiraz, Iran.

The restaurant in our hotel, at the time was actually cheaper for Dizi than if we had gone to a restaurant. We were informed of this by our Iranian friend Ellie, who we met on the bus to Marvdasht. Ellie joined us for dinner, so it was tea for four!

So Dizi it was to be. Friday’s Featured Food all the way from Iran. This was our Christmas Day in Shiraz dinner. 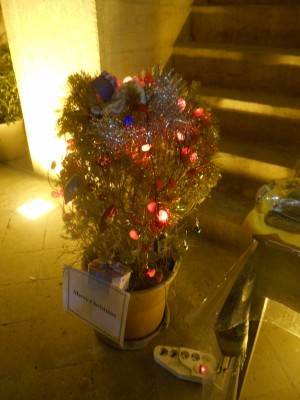 The only Christmas tree we saw in Iran in 2013.

Dizi is also known as Abgusht, but most places call it Dizi. Ask for an English menu if you can – most places won’t have one though so just ask for Dizi!!

Dizi consists of beef, bread, stew, potatoes, tomatoes and herbs and sauce. Basically you get given the following:

– beef stew in a pot (NOT dissimilar to Irish Stew, I must admit)

– a plate with raw peppers and onions

– a pestel (for grinding the stew together)

(- I also bought a fake Malt Beer to go with it and this came in a Mickey Mouse pot). 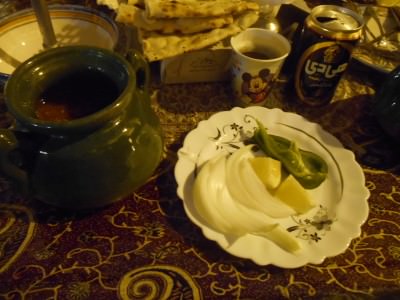 Altogether – the pot of stew, the dish of onions and peppers, the bread and my drink.

My fake malt beer in a Mickey Mouse mug! Hilarious!

So you use the pestel to grind the stew inside the pot, or in the bowl. You then pour the results into your bowl and eat it with bread dipped in, or with your spoon. It’s a cultural exercise. 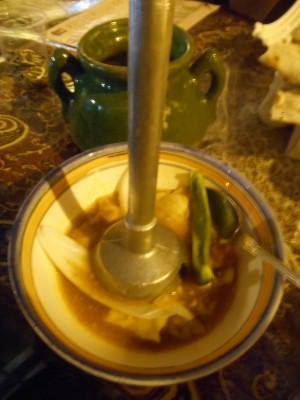 Use the pestel to crush the stew and mix in the raw vegetables.

How much does Dizi cost?

It varies depending on portion and restaurant of course. The portion I had was around medium size – it filled me up and it cost me 76,000 Iranian Rials, this works out at just under $3 US Dollars, so yes it’s expensive by Iran standards, but by normal standards it’s cheap. 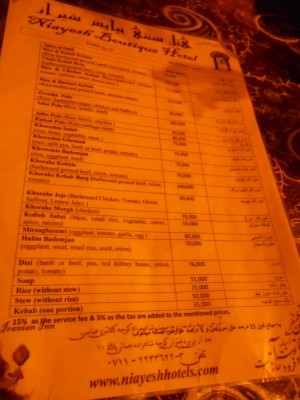 The menu in Niayesh Restaurant, Shiraz.

Yes! I loved it. This was the only time I tried Dizi in the entire month we spent in Iran so I can only judge on the one I had, but as a Christmas Dinner this was special, it was devoured and it was completely finished and I was full.

If you end up in Iran, be sure to try the Dizi. Here is a travel video of me trying Dizi on Christmas Day in Shiraz:

Friday’s Featured Food is an ongoing regular feature on Don’t Stop Living – a lifestyle of travel. If you have a meal, bar, pub, restaurant, brand or idea that you would like reviewed or featured on Friday’s Featured Food, please get in touch via my contacts page or my advertising page. I’d love to hear from you! I’d also love a free beer and some food, cheers!