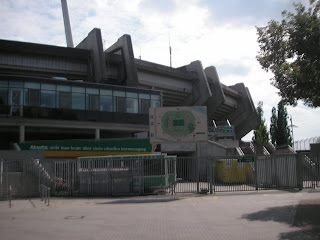 Being a member of Northern Ireland’s Green and White Army, I felt the need to check out Bremen’s own ‘Grune Weiss’ Army – Werder Bremen. So, while backpacking in Germany, as Bremen was a convenient and easy train stop for me between Hamburg and Hannover, it seemed ludicrous to miss out on at least seeing the city which gave the world Beck’s Beer and the home of one of the world’s most famous green and white football teams. 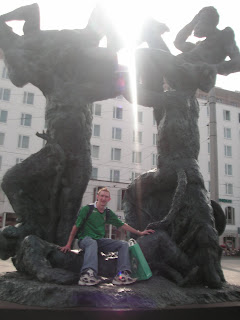 I caught the number 10 tram from opposite the Hauptbahnhof, got out at Jurgen StraBe, near the Weser River and dandered down a few nice traditional German streets to the football stadium. Ths ground is massive and the home of many a famous European night, with Northern Irish club Glenavon even playing here during the 1990s (I’m assuming they got a pasting). The Weser Stadion was impressive, and I took time to walk round, grab a few photies and buy some green and white souvenirs. The day I visited I was wearing my green Northern Ireland shirt and also got my SOE NISC fleg out for a photo by the stadium. 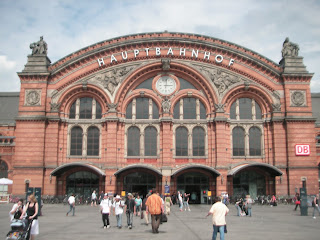 So a brief stay in Bremen involved not much more than a visit to the stadium, using trams, checking out the main streets, going into randomly an Irish Bar (which I usually avoid due to their lack of recognition of ‘Northern Ireland’, the political inaccuracies, the commercial aspect and the false atmospheres) called Paddy’s (which was closed, but open!), passing by a skate park (near got took out by a skateboarder) and getting a nice photo by a statue in the square (I never found out what the statue was). With a bit more cash and time, Id surely have also done the tour of the Becks Brewery. But I felt it sufficient to buy a Becks in a wee bar at the train station and chill the feck out, while I waited for my train back to Hannover. 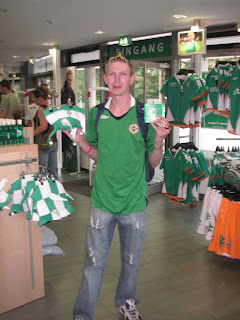 Beers Tried – Only Becks! Well I was in Bremen.

Where I Stayed – I didn’t, I simply stopped there on my train for a few hours between Hamburg and Hannover.

Price of a Bottle of Becks – 3 Euros.

Favourite Food – Only thing I ate there was a cwasont.

Favourite Thing About Bremen – Efficiency and speed of the trams.

Moving Moment – Stood in a shop full of green and white football souvenirs, by the Weser Stadion, reminding me that in a few weeks I’d be at Windsor Park watching Northern Ireland.

FACT – Bremen is the home of the second biggest Airbus plant of Germany, producing wing equipment for the A300/A310, A330/A340 and A380 families of aircraft. My uncle Jack, who works for Shorts in Belfast spent some time working out in Bremen.