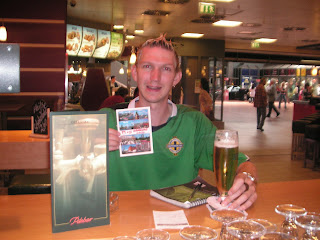 Backpacking in Germany: So are Hamburgers from here or not?

My reason for visiting Hamburg was not really to find out if the word Hamburger actually started there, although it did intrigue me, it was just a nice Northerly German city, and only a 2 hour trip from my base with Rene in Hannover. Having had an Interail Ticket for Europe, I was finding it easy to move about, as such I managed to see Hamburg and Bremen in one day, although by no means a thorough tour of each city I still sampled what I wanted without stretching my wallet. In Hamburg, a beautiful river and harbour are the main sights, though I took a leisurely dander through the city centre. The Ratthaus is a nice building, with a large square in front of it (full of outdoor bars), and it is also close to one of many bridges over the river. 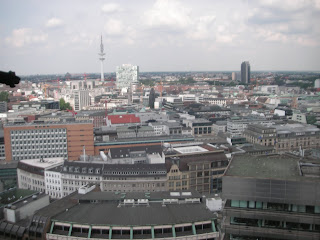 For great value, I went to the top of St. Nicholaus’s Church, which has a great view of the city and some history, in that it was bombed during air raids in the second World War. Restoration work and a part demolition have kept it in good nick (boom boom)…The church was the tallest building in the world from 1874 to 1876 and is still the second tallest building in Hamburg. A great view from the top. Hamburg is the second largest city in Germany and along with Hamburg Harbour, its principal port, Hamburg is also the second largest port city in Europe (Rotterdam number one), ninth largest port in the world, and the largest city in the European Union which is not a national capital. 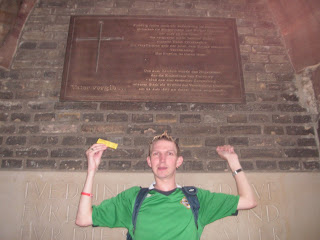 In the square near the Ratthaus, there are some lovely outdoor bars and many people gather there on Summer days. I met a Crystal Palace fan from Dresden there. One of many contacts I made on my travels, and another inspiration for my new found wisdom into people and life.

There are a lot of nice shops there too, I sampled some ice cream, German pork in a roll (but not a hot dog) and some beer. The beer was called Jever. Hamburg also has a massive central train station, with loads of shops, bars, restaurants and cafes. 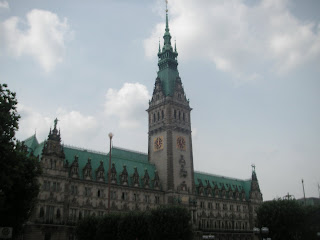 And since my German mates had told me that the word Hamburger is absolutely nothing to do with Hamburg, I decided not to risk a Hamburg ‘Hamburger’. It was only later, when I spoke to my Northern Irish friend, Michael and checked the internet, that I realised, the word Hamburger DOES come from Hamburg. Even my German mates were unaware of this, and I headed off on a train to Bremen, without ever trying a Hamburg ‘Hamburger’. Next times…

Bars Visited – Pilsbar Halle, The Bar on the Train.

Transport Used – Train. I didn;t use the underground or trams in Hamburg, favouring the walk.

Where I Stayed – I didn’t! I tripped it as part of my Inter-rail booking.

Average Price of a Pint – 4 Euros.

Favourite Thing About Hamburg – The Harbour and River.

Moving Moment – Spending about 30 minutes at the top of Church St. Nikoli just staring at the world and reading the information on the bombings.

FACT – The HSH Nordbank Arena (formerly the AOL Arena) was used a site for the 2006 World Cup.