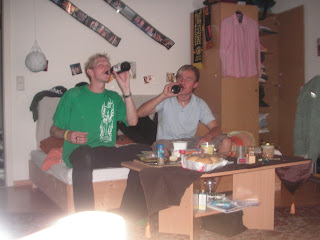 Backpacking in Germany: Hangovers in Hannover

When I arrived in Hannover, Germany (following a fantastic train journey from Leipzig), my mate Rene was waiting there to meet me, which was class, seeing as I hadn’t had a phone for 6 weeks or seen Rene for 2 and a half years and I also had to ask a polite young German lady to call him for me in Leipzig to let him know of the train delay. Having travelled round the world on my own for the most part (even though I had met over 400 new people), it was great to stay at Rene’s place, on the outskirts of Hannover and be staying with someone I knew. I met Rene in May 2004, when we worked together on Bournemouth Sea Front. We had met again in Bournemouth in 2005, and having been due to meet again in March 2005 (when I was in Berlin) it was great to see him again. A really cool city to stay in, Hannover is not renowned for tourists, so I stood alone and I loved it. I must admit that I didnt do any kind of city tour or culture tour in Hannover, rather dandered round on my own of the day and got pished with the boys at night, at this point I was trying to save money by walking round the sights, rather than paying to get in. 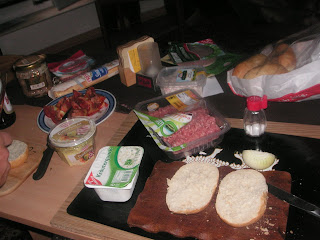 The first night, we got some amazing German food in the local shap. It was a simple but effective meal. You get a roll, cut it in half, add butter, uncooked pork, sprinkled pepper, uncooked onions, cheese and tomato and eat it like that. I had two of those and also added Potsuse (a German Pork spread) to another. Rene called it Gehactes, so I hope that’s right. We drank Warsteiner and Hasseroder, though Rene soon had me on the Herrenhauser Beer. The brewery of Herrenhauser is situated about a 10 minute dander from Rene’s flat. It was closed the day I went, but I got to see the park, the University, the Ratthaus and the cemetery which were nearby. 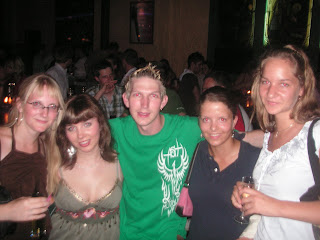 So that evening we took the tram, which becomes an underground. We got on at HogrefestraBe and got out in the centre of the city, I think the stop was Kropke. The first night we met a lot of German girls and not flirting with danger, the chatting up came naturally. Don’t they just love somebody different in their home city? Ich HeiBe Jonny. Ich komme aus Nordirland. Ich mochte noch einer biere bitte. Dankeschon. OK so it wasnt perfect, but I was getting there. The nightclub we did was open quite late, I reckon we left after 1 though as Rene had to be up at 6 ish for work. The club we were in had a Bierborse, which is basically a Beer Stock Market, so the prices fluctuate depending on popularity. Whats more is Rene’s local knowledge, so he knew that the first night (a Thursday) was two for one beer. At one point I was getting two beers for two Euros. Gifted. That night was a taster for German Hannover. The people were brilliantly warm, friendly and fun. 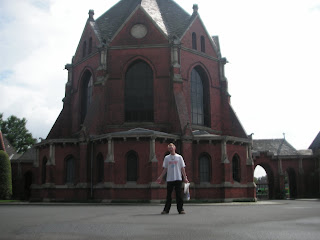 The second night, we got a wee crowd together, with a few of Rene’s mates joining us for a carryout at Rene’s first. I hope I get the names right – Guntrum, Tomasz and another Tomasz I hope. Getting pished on an 8th floor flat overlooking German countryside, and there was me, this middle class Northern Irish boy with nothing but wisdom and life to give. Well that night we did a pub crawl by the lake (The Maschsee), also taking in a rock gig on the way, and trying to learn some German culture. There were many outdoors bars and it was bucketing down. I must say it was funny to see all the Germans run for cover when it started bucketing. I just stood in the rain, cleansed and beered up. That night I also sampled Hannover’s speciality beer recipe, which is known as Lusse Lager. Basically you get a shot of strong beer in a small glass, along with a half-pint of lager. You hold them both at the same time, making sure the strong lager flows into the half-pint as you down it in one, using one hand. Total class and only about 2 Euros each. A few of these and I was in the mood for the club again. 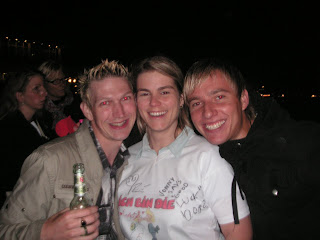 So, as travellers do, perhaps I would find some sex? And amidst the alcohol indulgences of Hanover I met a young East German who was happy to hear my chat up lines and let me stay at hers and I wont indulge or embarrass any fine ladies with evening activity. All thats to say is I left the club early to get off at Konigsworther Platz and woke up naked with an erection. Ironic that Northern Irish sausage should be on offer in untouristy Hannover. A cheese and bacon croissant later, and a night of passion was gone, for me to take the trip back to Magdeberg. 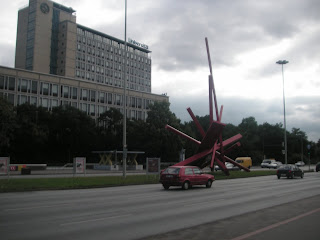 It must also be noted that during my time in Hannover, I visited the local football stadium, the Bahnhof (where I also caught my train to Luxembourg and Hamburg), the city centre’s shopping mall and a nice wee bar which had Banana Beer and Berliner Weise Lager. I am forever thankful of Rene and his hospitality he provided me with in Germany (and France).

Where I Stayed – Rene’s Flat at Stockener StraBe – a lovely place on the edge of town.

Average Price of a Pint of Beer – 3 Euros due to the cheaper Bierborse on the Thursday night.

Favourite Food – Potsuse and uncooked pork on bread, with the full Salad.

Favourite Thing About Hannover – The amount of bars by the beautiful Lake Machsee.

KEY SONG – Boney M – Brown Girl In The Ring (Sha La La La La) “She looks like a sugar in a plum” and you know what…I only found out later that Boney M were German!

FACT – Unlike most European cities, the centerpiece of Hannover is not a beautiful old castle or cathedral. Instead, it is a series of gardens. In fact, Hannover has some of the greatest gardens in all of Europe

5 thoughts on “Backpacking in Germany: Hangovers in Hannover”