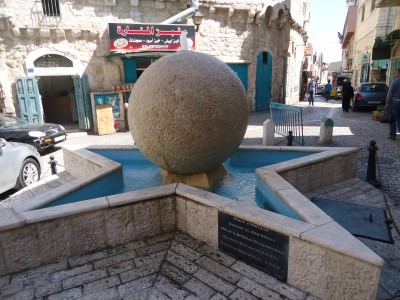 Bethlehem is a town you’ll have heard of. I’m sure of it. Yet you might not know that Bethlehem is in Palestine. Yes, there are no Jewish people here, it’s not in Israel and Israelis are not officially allowed into the Little town of Bethlehem. So I got my backpack on, boarded a bus across the border and suddenly I had left Jerusalem in Israel for Bethlehem in Palestine. Another border crossed (whether recognised or not) and an awesome town to check out. Oh and I’m posting this on Christmas Day in case you haven’t noticed… 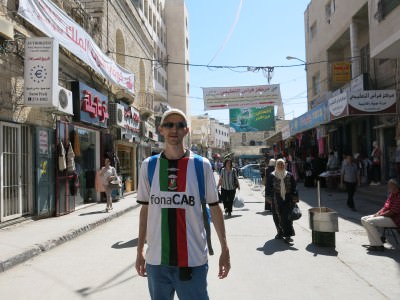 Finally I get to go backpacking through Bethlehem in Palestine – loved it!

As I once sang as a child “O little town of Bethlehem, how still we see thee lie”. Growing up in Northern Ireland, I attended church and Boys Brigade most of my life. I read the Bible and so when I finally made it to Bethlehem in 2013, it was long overdue. On a backpacking stint that also took me along the Jesus Trail and into holy places like Nazareth, Jericho and Jerusalem, it was probably Bethlehem that endeared me the most. 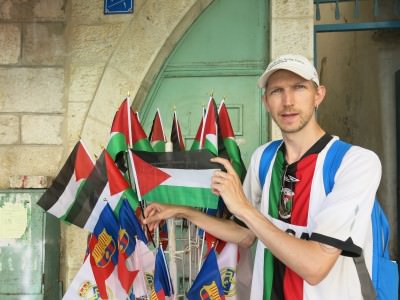 I’ve done these in list form for you, rather than just tell you about my story. Here are 10 things to see and do in Bethlehem, Palestine.

Getting to Bethlehem, Palestine

Getting to Bethlehem is ridiculously easy from Jerusalem. Head on a local bus which costs 7.30 Shekels. The buses are very regular and leave from a small bus depot not too far from Jaffa Gate. The buses are Palestinian, you will find mostly muslims on board. Israeli Jews are not allowed into Bethlehem, and so the bus will stop before you reach Bethlehem, so that the Israeli Jews can get out before they reach the border. 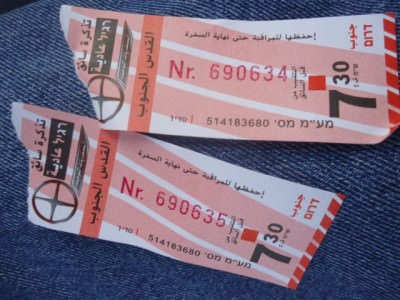 7.3 Shekels – the bus to Bethlehem, Palestine.

These days, the border crossing is very straight forward, though extremely sad. In June 2002, Israel started building an “Apartheid Wall” between the Palestinian areas and the Israeli areas. Not only is this an eye sore, its against human rights and it breaches many of the conditions outlined by the UN. Take your passport with you, as you may be checked. We weren’t. Suddenly we arrive in the town of Beit Jala and before we know it, the bus stops. We hop out and a local dude tells us “Welcome to the West Bank”. Arrival by bus into Bethlehem was my first time to visit Palestine. Here are the things I checked out, and loved. 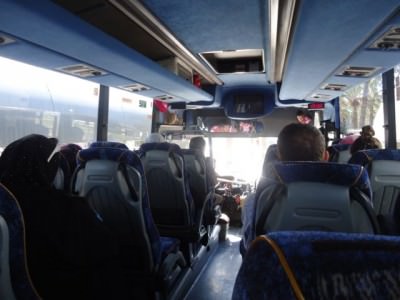 On the Palestinian bus to Bethlehem. It leaves from Jerusalem near Damascus Gate.

Where to stay in Bethlehem, Palestine

Bethlehem will have a load of pilgrimage style hotels, hostels and home stays for people to stay in. So that’s always a good option, but the awesome backpackers in the town is close to Manger Square and is called Bethlehem Youth Hostel. All the profits raised go towards helping children in refugee camps. 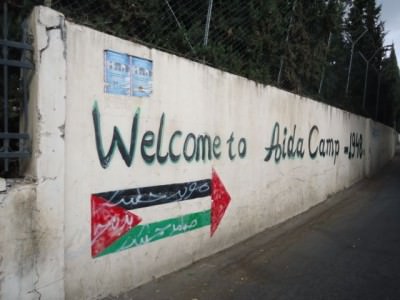 The proceeds from the Bethlehem Youth Hostel help out with the refugee camps.

1. Church of the Nativity

This is the biggest attraction in Bethlehem. It’s a bit of a religious pilgrimage for Christians to visit the Church of the Nativity. This is the place where it all began, apparently. The Church is one of the oldest surviving in the world. It has been listed as a UNESCO World Heritage Site. Entrance is free but touts will try to charge you a fee to “queue jump” and try and talk to you. Enter for free and walk around at your leisure, then inside, you’ll want to head to the Grotto of the Nativity… 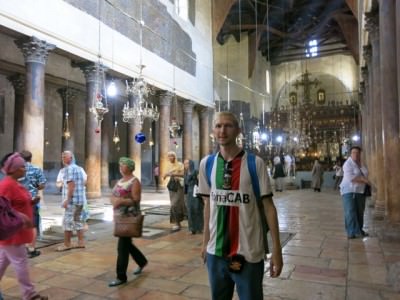 Inside the Church of the Annunciation.

2. Jesus’s Birthplace/ The Grotto of the Nativity

This is the key moment for you in Bethlehem. Once inside the Church of the Nativity, head to the back of the main church hall and join the hoardes of people who flock here to see the Star. The Star is in the underground Grotto of the Nativity, which is, according to legend, myth and those in the know…Jesus’s birthplace. Do the cheesy thing and get your photo taken. You’ll get about 2 seconds there at the most – it’s busy! 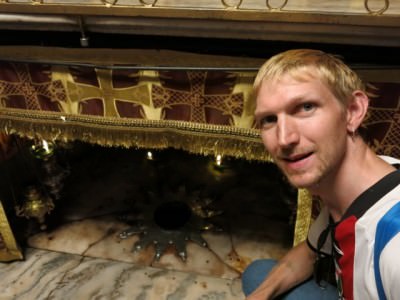 Touching the Star which represents the spot where Jesus was born in Bethlehem, Palestine.

The Jesus links to Bethlehem don’t end with a church and a star. The centre point of Bethlehem is Manger Square. It sits prominently and proudly as a focal point in this Palestinian town. The Peace Centre and the Tourist Information Centre are here, as are the two attractions listed above. The range of local shops here are good for the souvenir hunters. Expect Jesus to feature a lot and admire the Palestinians pride in their flag and the fact that this is their land. The Palestine flag flies proudly everywhere in Bethlehem, not an Israeli flag in sight. 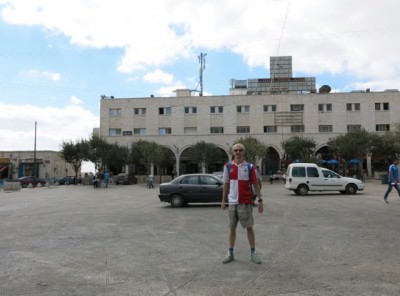 At Manger Square in Bethlehem, Palestine.

Don’t use seeing Jesus as an excuse to escape anti – commercialism. Grab a Stars and Bucks Coffee!! This is the Palestinians own take on a $hitty American brand of coffee. I’ll be siding with the Palestinians every time. 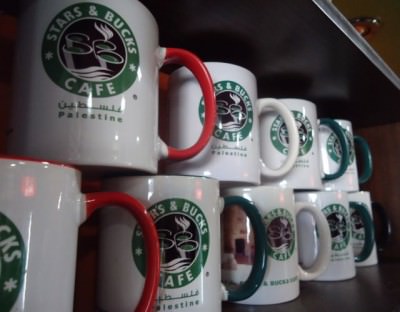 What’s interesting about Bethlehem University is that its students are either Christians or Muslims. Jews aren’t allowed here of course. This makes for a cool Middle Eastern University without the politics and religion getting in the way. Young Palestinians learn their stuff in Arabic and English here. It’s a really nice university. 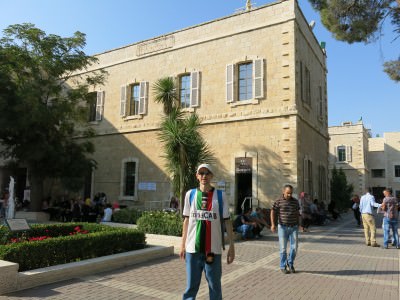 You might have read that I also visited the Taybeh Beer Festival in Palestine’s capital city, Ramallah. However Bethlehem was my first place to try Taybeh Beer. It’s a top beer to sink your lips into so pull over at the wee bar in Manger Square and treat yourself. I was immersed in the sun, enjoying Palestinian beer staring the the place where Jesus was born. It was a nice wee travel moment. 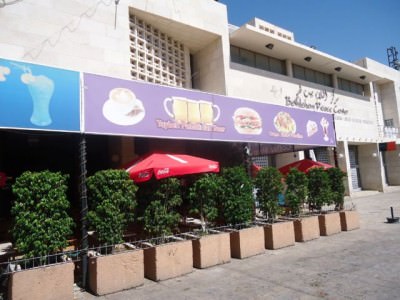 One church wasn’t enough so you might want to head to the Milk Grotto Chapel which is nearby. It’s up a side street and worth checking out too. Jesus fans will no doubt be ticking these places off. 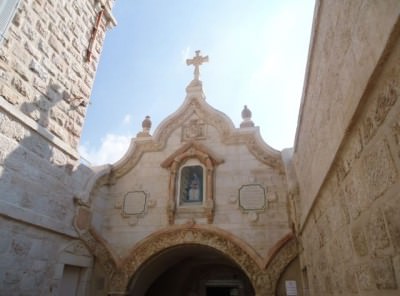 The Shepherd’s Fields is the one place on this list which is slightly harder to get to. You’ll need an extra bus to get out there as it’s actually in Beit Sahour, more of another town on its own rather than a suburb of Bethlehem. I actually did two days in Bethlehem and found that the Shepherd’s Fields was included on the awesome “Best of West Bank” tour offered by Abraham Hostels so I went there with the tour, as many do. Apart from seeing the fields area where the shepherds used to live and look after their cattle, the Shepherd’s Fields offers superb views of the surrounding area. Sadly, again this is obscured by the separation wall. 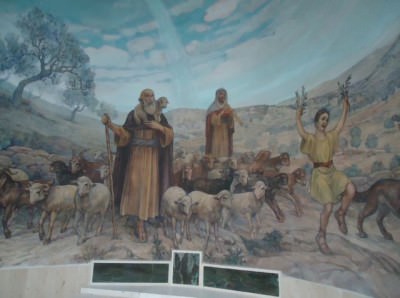 A Mural Inside the Shepherd’s Fields near Bethlehem, Palestine.

Let’s not forget you are in Palestine!! Mosques are all the rage here so take your shoes off and admire the Omar Mosque in Manger Square. There’s a nice mix of church bells and call to prayer happening in and around Manger Square – a cool place that has Christianity and Islam running in harmony side by side. 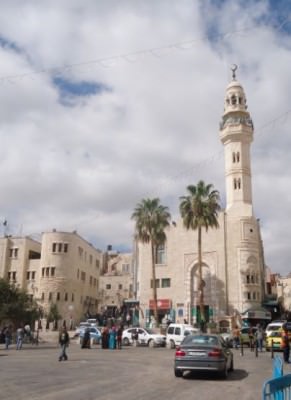 The Wall murals are an eye opener. As a backpacker who has travelled to a few so called “political trouble spots” such as Iraq, Iran and North Korea, I try not to take sides and understand both points of view. A lot of the wall murals in Palestine show Israelis in a bad light. One shocking bit of graffiti suggests that, to some Palestinians, the Israelis are Nazis (see photo below). Pretty hard to believe and puts things in a different perspective here. This however is not an opinion shared by all Palestinians, but it’s proof on the walls that there is a deep problem and a strong hatred within some elements of both communities. 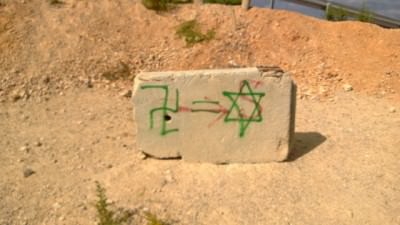 Ouch! Some graffiti in Palestine compares the Israelis to Nazis.

The Palestinians have been subjected to being fenced in and as a result, a lot of the walls have been graffitied on the Palestinian side. I’ll talk more about my visit to the Refugee Camp area at Aida in a future post.

This is just to get you thinking about Bethlehem. I really recommend a visit to Bethlehem, and even more so places like Hebron, Jericho and Ramallah. I was simply inspired and from a personal point of view – I class this entire area as a separate country. It was a pleasant and enjoyable welcome to Palestine.

Tourist Israel and Abraham Hostels have some cool tours to Bethlehem!

DISCLAIMER: If you’re reading this wondering why it hasn’t been posted on Christmas Day, blame Iran and its horrendous internet. I wrote this post mid-December but was unable to upload it or add photos until I left Iran…or I may have posted it and been unable to add photos or videos! Bear with me until 2014 and Merry Christmas!!

6 thoughts on “O Little Town of Bethlehem, Palestine: 10 Things to See and Do”