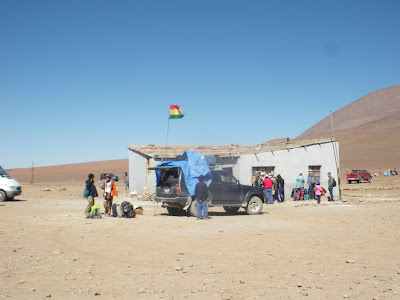 Chile is an odd country in my travel repertoire in that I have officially been there three times (or on three separate occasions) yet I have yet to do anything there! So I cannot say I have seen any of Chile, yet oddly I can say I have been to the southern most tip of Chile (Cape Horn), the Chilean capital city (Santiago) and The Atacama Desert (north Chile on the border to Bolivia). While all three locations can be pinned on my map, it’s almost as if I have never been to Chile. 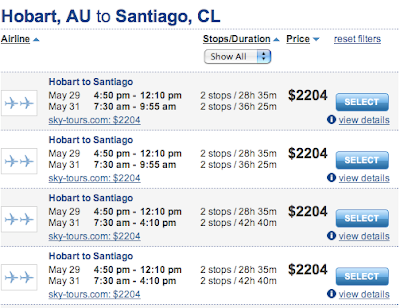 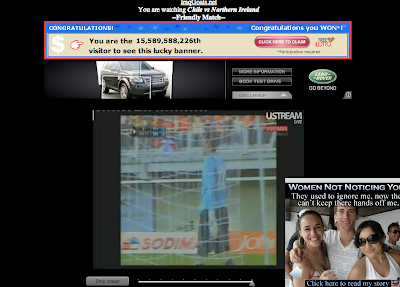 All these visits to Chile occurred in the last two months of 2010, a year in which Northern Ireland played an international football match against Chile in Chillan. It was the first match we had played in South America, and though I had priced tickets from Hobart (nearest airport to where I lived), I couldn’t quite afford the flight, or the time off for that trip. So I watched it live at 4am from my car on wireless internet by Devonport seafront! 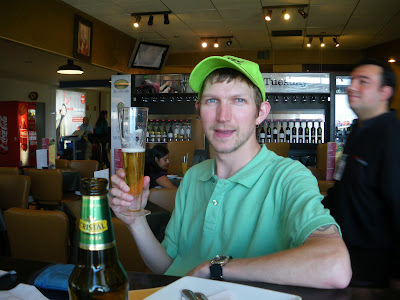 Having a Cristal Lager in Chile – at Ruby Tuesday’s Bar, Santiago Airport! 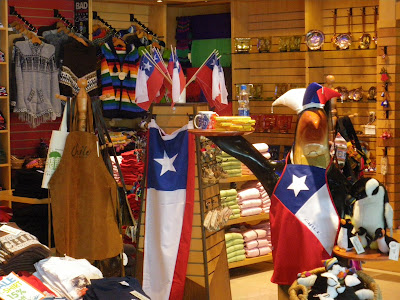 OK so I wasn’t there in Chile to be one of the 9 Northern Ireland fans in attendance, but I did make it there later, arrival at Santiago Airport in Chile marked my first ever footsteps in South America. But within a couple of hours, I had had a Chilean Cristal Lager and boarded a flight to Buenos Aires! 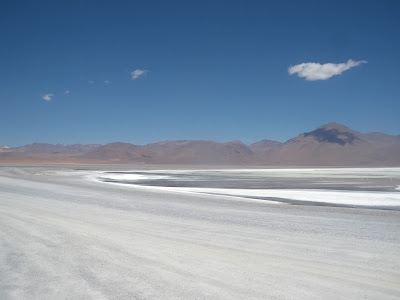 Fast forward almost two months later and suddenly I had the chance to cross the border into Chile and head to Arica, as I was part of a Jeep Trip on the impressive deserts and salt plains of south western Bolivia and northern Chile. 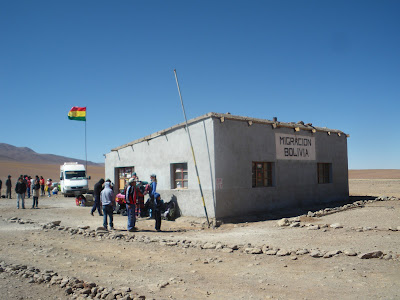 The hut flew a green, yellow and red Bolivian flag and in behind a sign said “Welcome to Chile” so I walked around, stood on the Chilean side, but had already decided I wouldn’t be venturing any further into Chile or indeed visiting the next hut along to get my Chilean entry stamp. 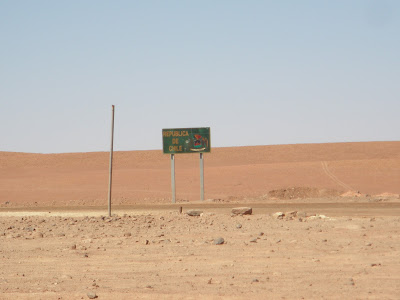 Welcome to Chile, for the third time for me, without seeing anything! 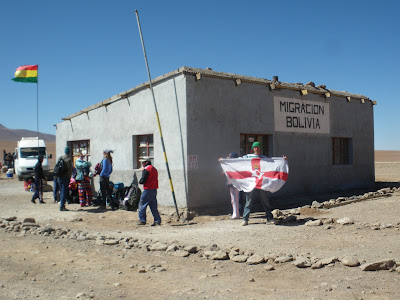 I posed by the Bolivia – Chile border with my flag. 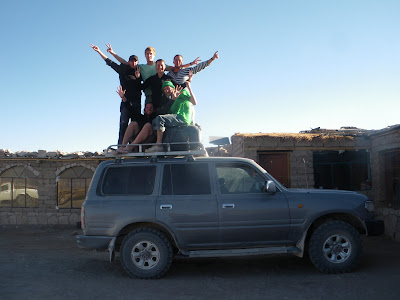 We dropped off three of our travel buddies there and said fond farewells to Alina (from Romania) and the Swiss duet of Jorg and Tom, who I last saw carrying their surfboards across the Chilean border! 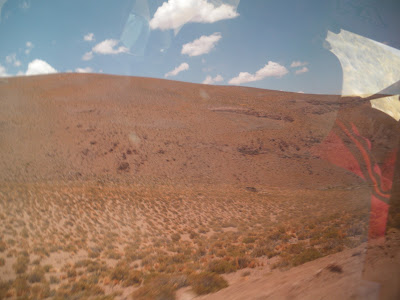 At this point we were heading back into our Jeep and staying in Bolivia. Those who were staying in Bolivia were myself, Guillaume, Benoit, chef and helper Wilma and Christian our driver and guide. It wasn’t quite noon and having been in Chile for about 30 seconds we were heading back to the dusty town of Uyuni. With a few more stops on route for sightseeing and lunch. 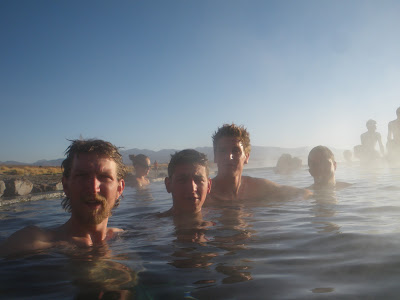 Then there was a very uncomfortable moment which influenced the mood of our group for the rest of the day. You know when you have a good group of mates together, all on the same wavelength and all happy and some wanker comes in and ruins the party? Well that’s what happened as our Jeep was hijacked by a cheap Italian hitch hiker who asked our driver if he could hop in and get a cheap ride onwards to Uyuni. Normally I’d be fine with this, helping a fellow traveler and besides, we were stranded on the border with no bus station and in the middle of the desert. We could have been his only hope. 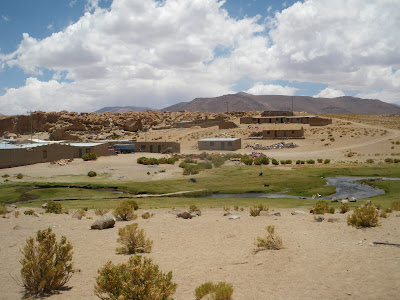 But this Italian wanker went about things the wrong way. Firstly he got into the Jeep without asking any of us, took the best seat (which we had rotated ourselves for the previous 3 days), didn’t say a word, didn’t introduce himself or anything. Guillaume, Benoit and I looked at each other in disgust. At least we were together. Christian and Wilma didn’t aid the situation by not explaining who this guy was, why we had agreed to pick him up or indeed where he was going. 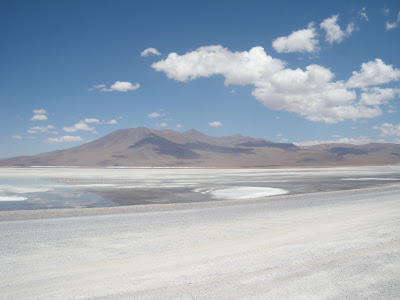 I got agitated but enjoyed the amazing scenery from the Jeep window and resigned myself to drift away. The Italian guy spoke little, offered us nothing and upset the mood of the camp. We stopped off for lunch half way between Hito Cajun on the Chile border and San Cristobal. I think the name of the tiny settlement was Alota and have yet to hearotherwise, so we will go along with that. 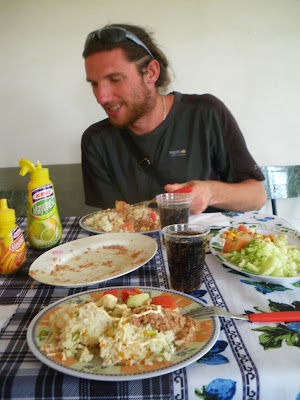 There was a shop and we had a decent lunch. 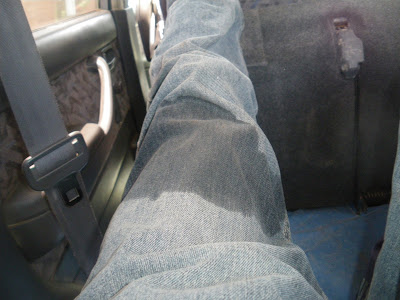 The Italian wanker then preceded to pour coke on my jeans leaving me sticky, while myself and Benoit popped outside to photographs Llamas in this picturesque setting. 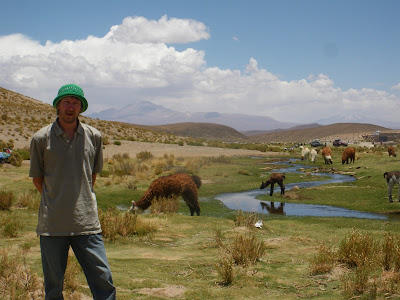 The tiny settlement at Alota, where there were many Llamas. We christened the Italian boy as Salvatore and soon we were headed onward to San Cristobal.

What – Chilean Border at Hito Cajon

CLOSE TO THE CHILEAN BORDER IN DESERT PLAINS:


AT HITO CAJON ON THE BOLIVIA TO CHILE BORDER: