I’ve done load of travel interviews in the last few years and almost all of them ask me why I travel or what started me on travel. While there are probably many reasons for it, I can actually limit it to one word: football. Casting my mind back to 1986 on today’s Sunday’s Inspiration. An event that took place in Mexico. The FIFA World Cup. 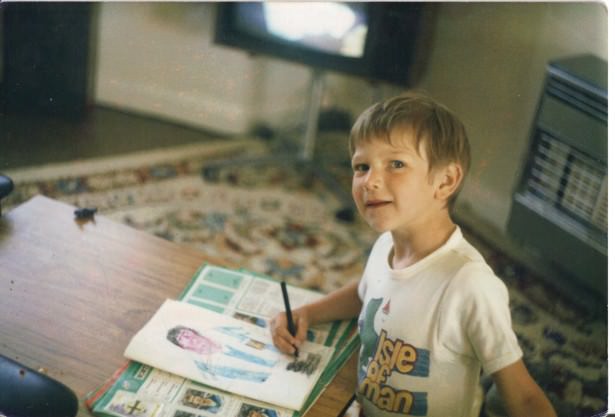 June 1986 – during the World Cup – drawing Maradona and collecting the Northern Ireland stickers on the Panini album.

I was only 6 years old. My Dad comes home from work with a present for me. It’s probably the best present anyone has ever bought me. It was a green and white Northern Ireland Mexico 86 scarf! It ranks as one of the most exciting days of my life. 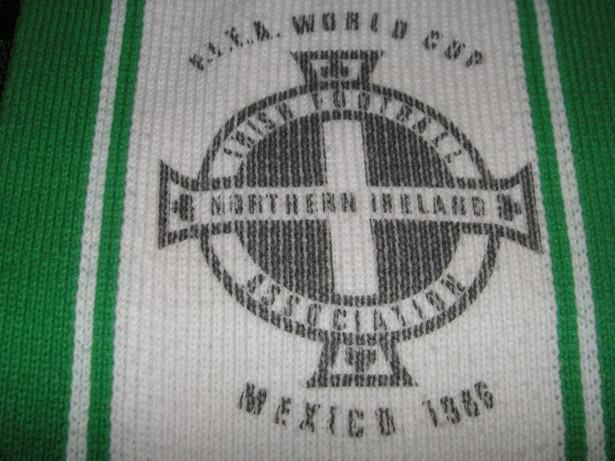 My Dad came home from work and brought me this – a Mexico 86 scarf for supporting Northern Ireland!! Best present ever!!

My Mum then agreed to buy me a Mexico 86 Panini Sticker Album. I was only 6years old but the memory of it will never leave me. When I opened up the album I was inspired. Teams like Uruguay, South Korea, Iraq, West Germany all in the same football competition as my wee country, Northern Ireland. I actually touched on this subject before back in 2008 on one of my very early blog posts. 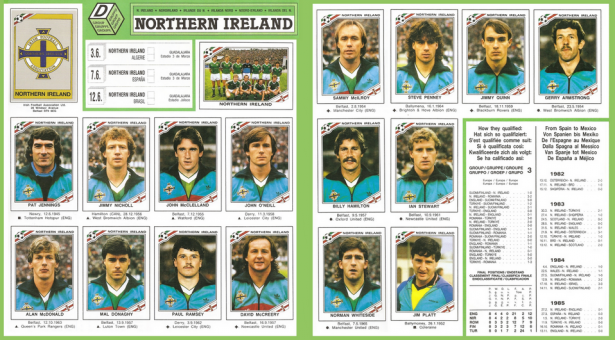 I collected all the stickers and completed the album, thanks to swapsies at school and my cousin Alison swapping sweets for stickers for me – I remember she got me a load of Northern Ireland players – I asked for them first. Sadly, I later lost the album, or it may well have been stolen – still get quite upset about that as I wrote all the scores in it and followed it every day, but it’s gone. 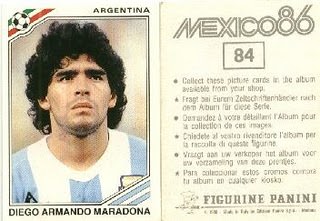 I already knew all the Northern Ireland players – Dad talked about them, they were in the local papers and on TV. Norman Whiteside was my hero. But once I’d got to terms with knowing the Northern Ireland team, I turned to other pages. I looked at Uruguay, South Korea, Iraq, Paraguay, Hungary, Brazil, Spain, England, Scotland, West Germany, Denmark, Argentina, Italy, Bulgaria, Morocco, Portugal, Poland, Canada, USSR, Mexico, Italy, France, Algeria. All 24 teams. I was intrigued. 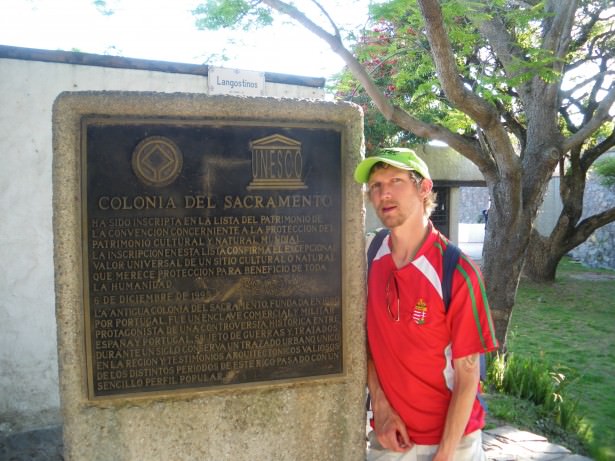 I remember looking at Uruguay and seeing that players were born in Montevideo. They won the first World Cup. I was intrigued. I wanted to go there. After that World Cup, I started looking at the Atlas in the bookshelf at home. Bear in mind it was a very different map to nowadays – USSR and Yugoslavia were countries. East Timor didn’t exist. Nobody had heard of the Faroe Islands. Soon I started to look at all the countries in the world, thinking, hoping and believing one day I could visit some of them. 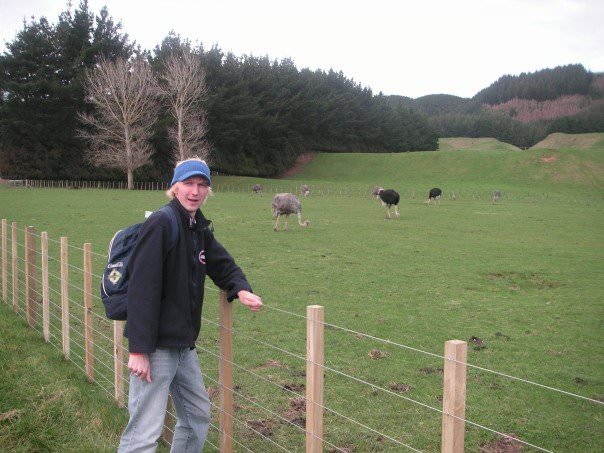 Backpacking in New Zealand in 2007

It took me a while to get into travel, despite being crazy about it now – in my teens I was always into football and music concerts more than travel. Always. I did go on a school trip to the Netherlands though and visited Spain, Greece and France with family, plus the USA for the first time I left Europe. It wasn’t enough though. I may have completed my Mexico 86 sticker album, but my world countries album was still in single figures when the new millennium came into view. Then in 2001 I went to Canada for my cousin’s wedding. 2003 I finally left Northern Ireland and moved to England. 2005 I visited Eastern Europe. 2007 I visited China and Russia for the first time. 2009 I backpacked to Australia. 2010 I made it to Uruguay. 2011 it was Botswana. 2012 it was Laos. 2013 I made it to Iran and Iraq. Plus a load more countries in between. This year I’m off to Brazil again, for the World Cup! And aiming to break the 100 real country mark by the time I turn 35. 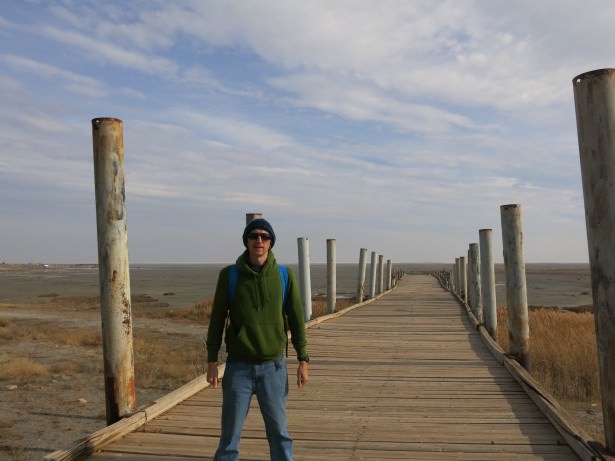 Backpacking in Iran in 2013 – Lake Orumiyeh.

And it all started with the Mexico 86 Panini Sticker Album – yes – that’s where my travel dreams began my friends…I’ll never forget Kim Pyung Suk. As a 6 year old I couldn’t believe a person could actually be called that. 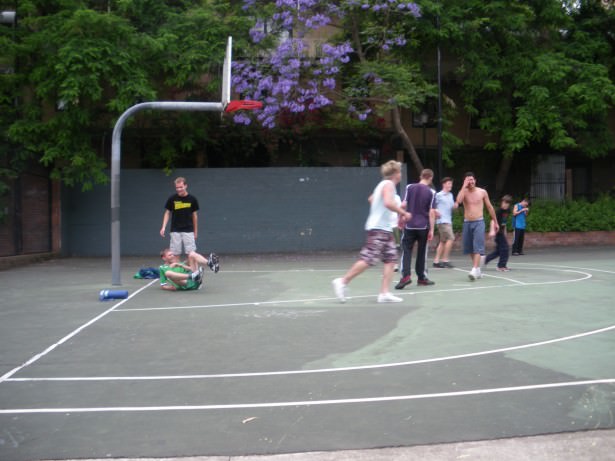 Playing football in Sydney, Australia in 2009.

Life scares the living daylights out of me most times especially when it goes “full circle” on me so often. It was watching Northern Ireland on TV from Mexico in 1986 that got me in love with football, and travel. Northern Ireland lost our last match in that World Cup 3-0 to Brazil. We haven’t qualified since. By total irony I am going to be watching my first ever World Cup match next month. The match will be held in Brazil. I will wear a Northern Ireland shirt. And Brazil will play Mexico. Just after the World Cup ends, I’ll be flying into Mexico City. That’s what I call full circle. Amazing, but that my friends in NOT the final piece in my Mexico 86 jigsaw…

As of July 2014, I will have been to every country that qualified for the Mexico 1986 World Cup except for:
Bulgaria, Algeria, Morocco.
(I’ve been to Germany which includes West Germany and I’ve been to 7 ex-Soviet states)

** Edit – I completed the set in December 2017 when I touched down in Marrakesh, Morocco.

5 thoughts on “Sunday’s Inspiration: Mexico 1986, Norman Whiteside, Kim Pyung Suk and the REAL Reason Why I Travel the World”