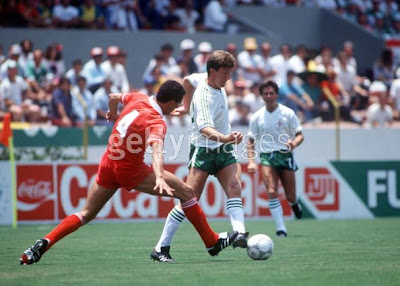 Goodnight Planet Earth, As We Know It (And I Feel Fine)

It was all so surreal like a childhood dream or a Norman Whiteside World Cup goal. Back in 1986 I got the Norman Whiteside World Cup goal. A free kick in an impressive 1-1 draw with Algeria (which we could have won 2-1). That was enough for me in those days. A draw for Northern Ireland with Algeria and a decent performance in the World Cup heat of Mexico both made me proud of my country and made me eager to see places like Spain, Algeria and Brazil. Football was my inspiration to travel. I was fascinated by those foreign names in my old Panini Sticker albums, and I always wondered what places like Ushuaia,  Incheon and Mexico City were like.

But now I was suddenly off to a continent without a football pitch. Antarctica is not even a nation and doesn’t compete in the FIFA World Cup. I had no idea what to expect, but I wasn’t alone. 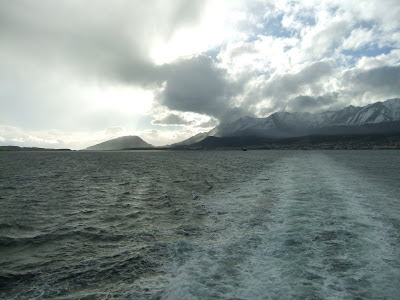 I was on board a boat drifting down the Beagle Channel against a southern Argentine sun which faded into a Chilean sky across a stretch of water that both countries share equally. I was suddenly on board the MS Expedition sailing south south south… 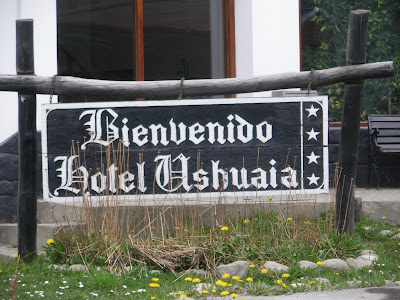 The day started with breakfast in the posh hotel. Not a decent breakfast it must be said. Compared with all the hostel breakfasts I’ve had recently, the breakfast in Hotel Ushuaia (Four star my arse) left a lot to be desired. So for that very reason, I milked it and nicked a few croissants for my lunch, enjoying a hat-trick of cups of tea which they had refused me the day before. If money talks, and customer service is a priority, then Hotel Ushuaia is happy to take the former before neglecting the latter. 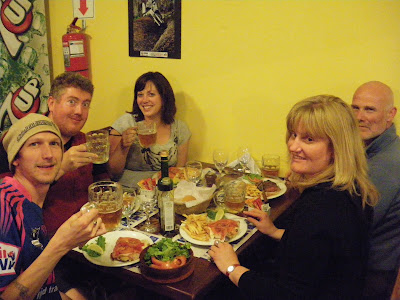 I met a few “Antarctica travel buddies” over breakfast, and we had already had a drink and a meal the night before and were starting to gel and mix stories. From Mark’s travels round Africa, to Russell’s quest to Mount Everest Base Camp, this was a bunch of world enthusiasts. Similarly to me they longed to escape their quiet nothing towns in order to sample the variety of goods and bads from other cultures of this round ball. 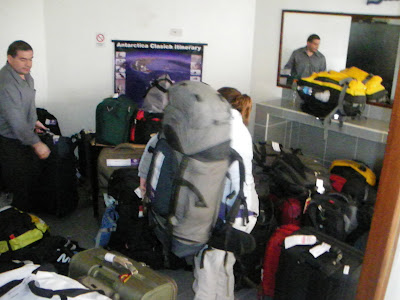 After breakfast it took me 10 minutes to finally pack everything at the hotel. I checked in one bag with the Gap Adventures Staff (my bag would then be transferred to my cabin on board the boat ready for sailing, meaning I didn’t have to carry it round with me all day, before the 4 pm boarding time). 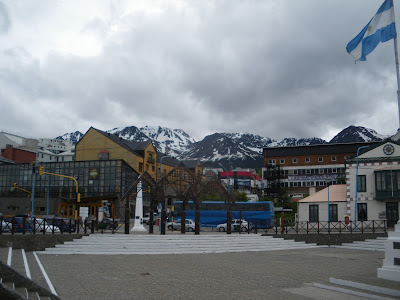 I still had quite a bit to do round the city of Ushuaia before meeting my travel buddies at 4 pm for the departure from Argentina. This meant I kept my small bag with me and had basically a free day in Ushuaia to ponder before leaving “civilisation” for almost 2 weeks. 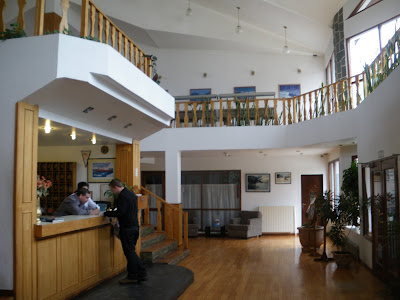 First up, I had struggled to get on the internet for a few weeks since being on my travels again, and they had free Wi-Fi at Hotel Ushuaia. It was slow, intermittent and annoying. But I was in the southernmost city on the planet after all. I managed to send some messages to friends and family via hotmail and facebook. I also managed to upload the text entries from some of my blogs, but not the photos or videos as they took forever to upload and normally crashed. I got a few of my favourite recent photos uploaded onto Facebook before leaving which was a bonus. 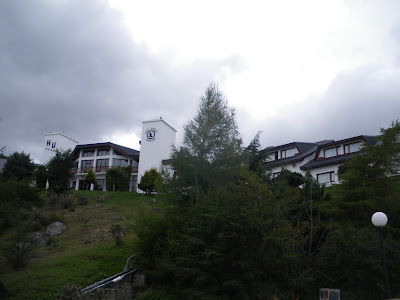 Then I left behind the Hotel Ushuaia, on a raised hill on the edge of the city (hardly a great location for a 4 star hotel) and dandered down the hills into town. I had booked my boots, trousers and coat from a place in the city which does rentals. I felt this was ideal as it was decent enough price ($80 US Dollars) and also meant I didn’t have to wash my gear or cart it round the world with me. Which is a nuisance. 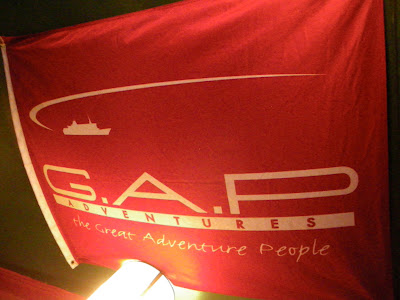 However the night before I had learned from my travel buddies that the company in charge of our trip, Gap Adventures were providing us with the boots on board the ship, so when I called into Jumping (the rental shop) I rented only the coat and the trousers. Both were hefty and most importantly wind and water proof. I was very well equipped for the trip, and with hindsight I took too many clothes to Antarctica… 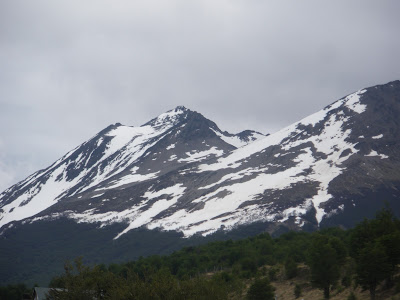 After that I had hoped to get my lavado done (laundry), but I left it too late and also failed to remember the fact that South American countries often have a siesta or a shutdown in the early afternoon. This meant the two laundrettes were closed, and the hostel which can wash your clothes for you couldn’t guarantee them being ready for 3.30 pm. So I had to cart my clothes around with me. It was no problem and in fact they needed washed, but I had easily enough clean clothes to last me the 12 days or so I’d have to go till I was back on dry land. Sure, there were laundry facilities on board the ship, but at a huge cost. They charge per item, with it costing $1 US Dollar to clean a pair of socks!! For $2 US Dollars I could get my entire wardrobe washed! So I decided to walk round the city and wait. 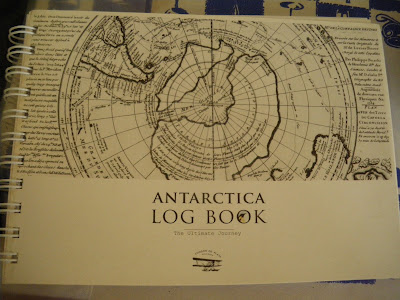 At various points while walking round the city, I had noticed some fellow travellers but didn’t talk much to them. I would have about 2 weeks to meet and chat with everyone on board and in the wilderness of Antarctica. I had wanted a final cup of coffee and to buy a special Antarctica Log Book. This log book would contain all the information I needed for the trip and had all the space for me to fill in my personal account and diary of the trip. It had been recommended by Russell (one of my new best buddies for the next 2 weeks) the night before. And for 80 Pesos I bought it after searching many shops for it. 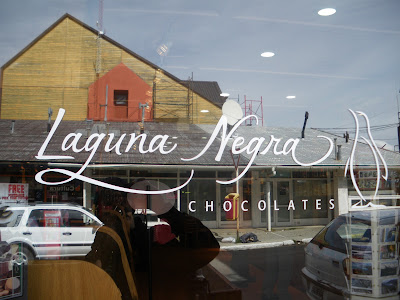 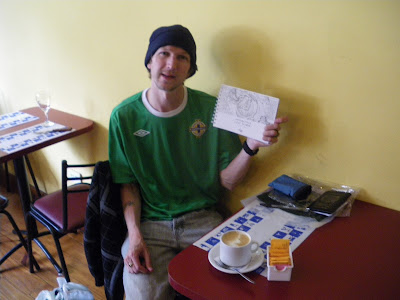 After that it was time for a wee cup of coffee – A Cafe Con Leche in the Darwin Pub on a tilted side street 2 minutes walk from the harbour. That had been the same venue as our meal the night before. I sat on my own in their and completed my notes on Ushuaia. Again they had free Wi-Fi so this was actually my final contact with the real world for 2 weeks. I later tried to send a text message from my phone on the Beagle Channel but it didn’t send. That’s me enjoying my cup of coffee in Darwin Pub. 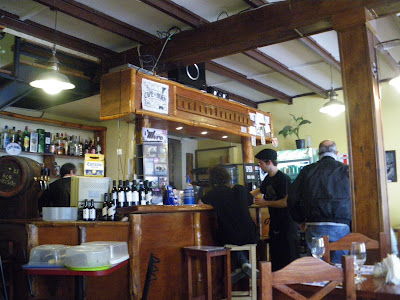 In the Darwin Pub I was served by Mauro, an American guy now living in Ushuaia, who was very friendly and able to speak good Spanish and English. It made me think I seriously needed to learn Spanish on my return to South America in 2 weeks time. 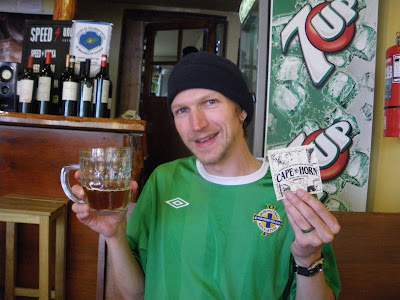 I spied fellow traveller Mark in there on the table opposite, he was also travelling alone and sitting opposite me, so I asked to join him. Mark is a well travelled Australian, now living in Adelaide. He was having a beer, as Aussies do, so I decided to join him for a wee tipple before we would head together to board. 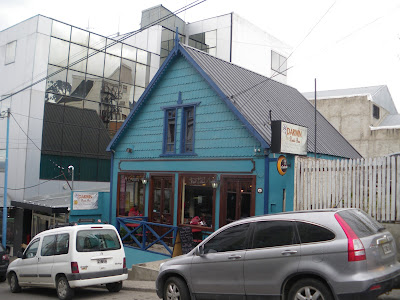 In there was also a Canadian guy on our voyage, Mike from Ottawa, who I would meet properly later on board the boat. 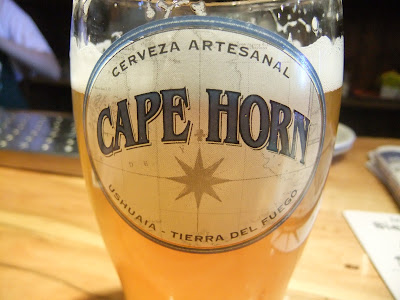 I sipped my final gulps of the Ushuaian beer and walked down to the harbour, where we were escorted to the boat at 4 pm by coach. 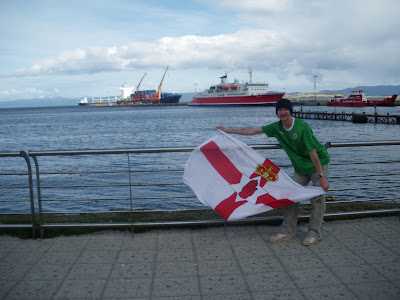 Just before boarding the boat – flying my Northern Ireland flag at the end of the civilised world. 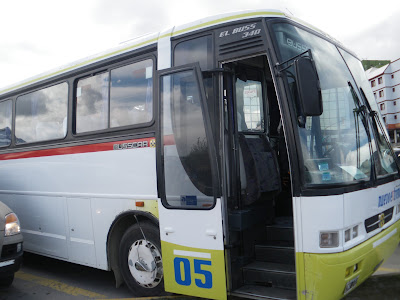 Our bus to the boat (all 400 metres of the journey! – Just to get us through customs!). 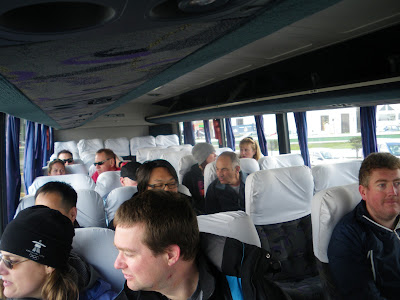 On the bus to Antarctica… 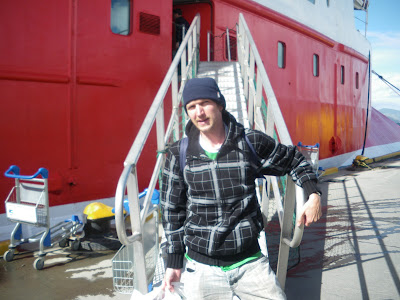 About to board the MS Expedition. 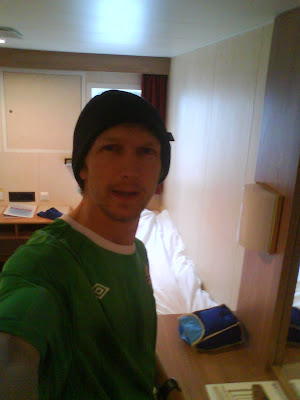 And that was that. I was now onboard my new home, and ready to leave Ushuaia behind in the quest for Antarctica – a magical continent of superlatives.

IN MY ROOM AT HOTEL USHUAIA: