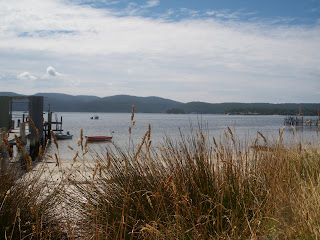 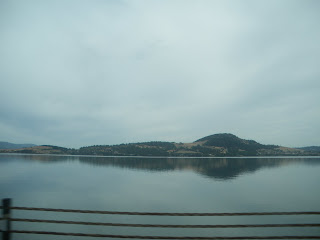 From our hostel, The Pickled Frog on Liverpool Street in Hobart, we drive to the Tasman Devil Peninsula. This time Paul was driving. We drove through Hobart (always very quiet) and onto the famous Tasman bridge. The bridge links over the main river area and Ralph’s Bay, and connects Hobart and Glenorchy (an elaborate suburb of Hobart if you like – think Dundonald as either part of Belfast or also a separate town) to a number of other towns beyond Rosny Park. The bridge is one of the must sees on the island. Its pretty and it is big, but in your boring reality – it’s just another bridge. 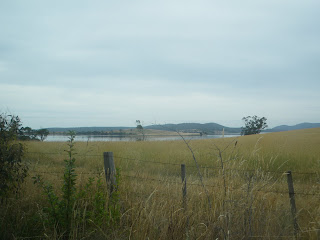 Once on the other side it becomes even more peaceful. The busiest it gets is near a turn off to the airport. The airport in Hobart is the main one on the island of Tasmania, and it is situated by the sea, north of Seven Mile Beach, Lauderdale and Rokeby. Beyond the airport, we reach a long, narrow, low bridge which brings us out at Midway Point. A small un-noticed town called Sorell passes us by. Daniel and I laugh that it could be a relative of Clarke Kent – real name Kal El, going under the moniker of Superman. Its even funnier when we pass a signpost for Bellerive – an in joke – we spent hours of our time in Parramatta watching Smallville, the modern day TV Series following Clarke Kent in his younger days. Bellerive is a mental home for freaks in the series. 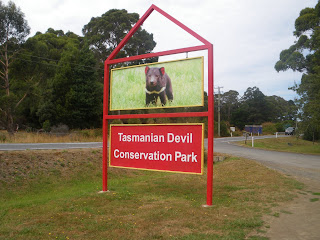 Past Sorell a sign with a funny mural on it for “Bangor” appears – nothing like my Northern Irish home town of the same name. This was literally just a farm disguised as a village I believe. Anyway it gave me a laugh, though I couldn’t grab the camera in time for a photo of it. We then made it onto two separate islands, or peninsulas. The first one was the Forestier Peninsula, the second was the Tasman Peninsula, where we were hoping to see Tasmanian Devils – as they are almost impossible to see in the wild. 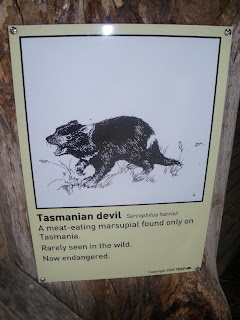 Our first stop was indeed to be Taranna, home of the Tasmanian Devil Conservation Park, where we enjoyed our Tasmanian Devil experience. That deserved a page and post of its own on this blog – so it got one and hopefully you can read about it. At Taranna we paid $18 (which I had bargained for) for all day entry to the Park. It was well worth it, we got to see Tasmanian Devils, Quolls, Kangaroos and other mammals. We saw a live feeding session for the Eastern Quolls, a species of marsupial found ONLY in Tasmania. 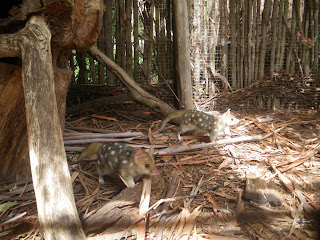 The Quolls are interesting mammals – there were a few of them in a cage in the Park. They are a distant “cousin” of the Tasmanian Devil, although they look nothing alike, and certainly don’t have a big bite! They are meat eaters and they eat lizards, insects, larvae, dead animals, worms. They are not yet an endangered species however and there are NONE of them on the Australia mainland. They are brown in colour with white spots. We saw them being fed on dead shrews (or something like that). At this point there was a gap in events at the Park, so we decided to do a lap of the Tasmanian Devil Peninsula in the car and come back later to the Park for the live Kangaroo hand feeding session and to check out the birds, a video and the wallabies as well. We had a family day ticket so this was fine to come back. 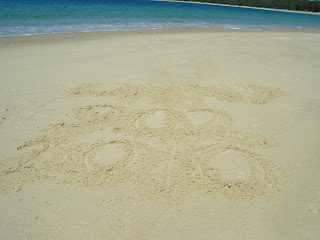 We got back in the car and drove through what was left of Taranna. We headed for Port Arthur, passing by (and getting lost in) a campsite. The road was a loop and we came off at the turning for Remarkable Cave, one of the sights. Much before the cave however was a lay by and a place where the world stood still, apart from for us four British visitors. First up we saw Carnarvon Beach, but decide to stop where there was nobody else about – Safety Cove. 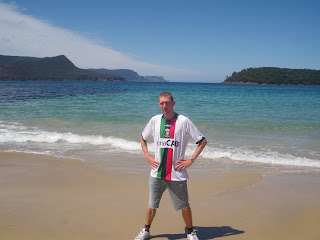 A totally gorgeous empty beach waited for us on the 10 metre walk from the layby. the world stopped. I touched the water, felt the sand and enjoyed the pleasant breeze to downplay the heat of the sun. From Safety Cove Reserve it was on round to what is known as “Remarkable Cave”, which sounded like a dubious title to me, so we prepared ourselves for the worst. We exited the car and saw that it was just a 15 minute walk down to the cave. 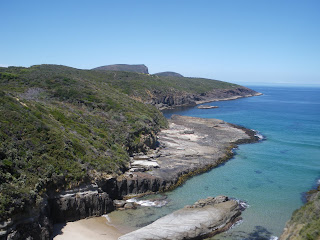 It was actually less than that – down some steps and a wee path. In the end I was actually quite impressed – the cave was quite cool! We climbed down by it for photos and stood at the cave entrance. 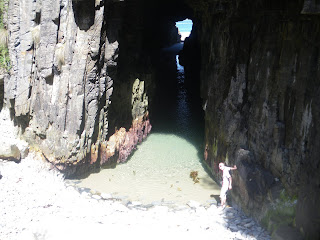 We did contemplate swimming in the water and swimming through to the main beach on the other side. But time was short and we had agreed to go back and feed the Kangarooneys for 2.30 pm. So we did. 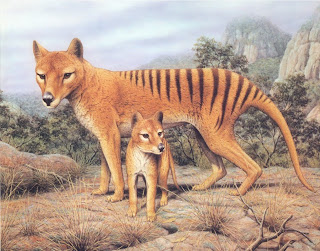 Once back at the Tasmanian Devil Conservation Park, we watched a very interesting documentary about the Tasmanian Devil and the now (presumed) extinct Tasmanian Tiger. The Tasmanian Tiger hasn’t been seen since 1982, and even then that was a very dubious sightsing by a wildlife expert who conveniently “couldn’t reach his camera in time.” After that we saw some birds – a well disguised tree trunk resembling owl which at first was so camouflage I didn’t even notice it. Then we saw some smaller birds and a massive brown falcon on a perch. 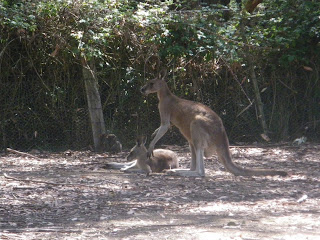 Then it was into the lair of the Kangarooneys. The type of Kangaroos here in Tasmania are Forester Kangaroos, which is the only type of Kangaroo currently habitat in Tasmania. They are a subspecies of the very common Eastern Grey Kangaroo in mainland Australia. They gather in dozens and graze in fields. When the temperature rises they graze in the shade. Tasmanian devils will eat them, dead or alive (though live Kangaroos could easily crush the devils also). 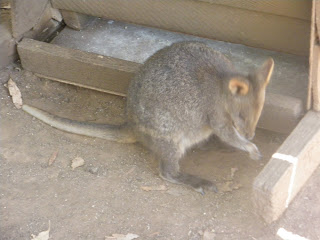 Also in the same lair were Wallabies, which are almost like baby Kangaroos (though not Joeys). They are called Red-Necked Wallabies, even though their necks were clearly not red. I was a bit silly, first I thought one of them was a Possum, and Daniel had to correct me. We were pretty close to the Kangarooneys once inside and they were all huddled in a bunch anticipating food. In came Scholesy again (the zookeeper dude was a dead ringer for Paul Scholes of Manchester United) with buckets of food for his fellow Manchester teammates – the Kangarooneys. 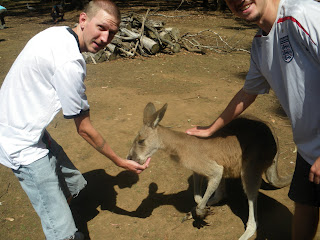 They were small brown pellets in the buckets and straight away I grabbed a handful and went over to the Kangaroo which had been close to us when we came in. He was so friendly. he ate it right off my hands, loving it, loving the attention and enjoying the bit of food. I took another handful and gave him more, before it was somebody else’s turn. 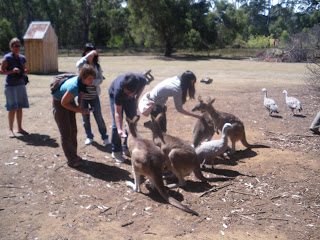 Kangaroo feeding was spontaneous that day – we didn’t even know you could do that at the Tasmanian Devil Conservation Park so it was a pleasant bonus. After feeding the Kangarooneys it was basically a head back to Hobart and off the Tasmanian Devil Peninsula. On the way back we pulled over for petrol and I grabbed an energy drink and an ice lolly – a Banana Monkey. Neil and Daniel bought a fish and chips in the take away shop there. Whic was a bargain for $5. When in Tasmania you must try fish and chips, fishing is a big industry here. And the fish and chips are great!


And we were safely back in Hobart and the trip to the Tasmanian Devil Peninsula was over.

VIDEO OF KANGAROOS PART ONE:

VIDEO OF ME FEEDING KANGAROOS:

THE REAL PAUL SCHOLES, not the Zoo Keeper from Taranna: