It had been a long trip north east of Bogota in Colombia since the previous day and I can’t remember a more dazed or drained experience in my travel history than this particular day and border crossing from Colombia to Venezuela. It was all a bit bizarre and I didn’t really know what was happening to be honest. But after arriving in Venezuela, a guy holding a gun gave me a free glass of orange juice. Here’s a brief overview of the day, as I covered it in detail before… 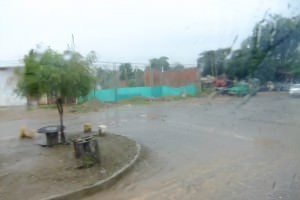 I ended up in dreary Cucuta. You’re lucky I’m sharing such a good photo of it with you!

On arrival in the drab and dreary Colombian border city of Cucuta, I had one intention on my mind. To get into Venezuela. Safely. I also wanted to ensure I would be in Caracas by lunchtime the following day as I had a visa for Suriname to sort and my flight was booked out of Caracas. So I collected my bags off the night bus that had taken me from the town of Sopo through the day and night via Duitama and Tunja up to Cucuta. I then looked at options to cross the border. We were less than 5 kilometres from the border and basically no visas are needed but you can bet your life there would be some stringent security checks between Colombia and Venezuela. Yes of that you can be sure. Guns and drugs are smuggled daily across this border. And everybody knows it. 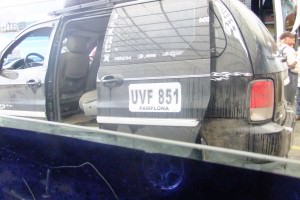 The options were bus or taxi. I’ll be honest and say I didn’t have much money on me. I had ZERO Venezuelan Bolivares. I had tried to get them in Bogota to no avail. I simply wanted the local money on arrival in Venezuela as I had heard about the scandals and money issues within the country. Bus was the cheap option and a bus would take me to the Colombian border checkpoint. I knew that bit would have been easy, but a local guy I met told me I was the only foreigner in town. Except for Venezuelans, he was right. He didn’t advise me to get the bus as he believed it would be dangerous. Again, he was right. I didn’t ask the reasons, nor did I care. I wanted to get across the border. I had over one hundred US Dollars and SOME Colombian Pesos left. In the end I got a bargain with a taxi driver to get in a shared taxi with a few locals and cross the border with them. I know they all paid more than me, but I didn’t have the money and it was crazy enough for them to see a foreigner there anyway. I also assumed I was in a shared taxi from Cucuta to San Antonio Del Tachira. This was also wrong, and though I passed through Del Tachira, this taxi for the bargain price was taking me all the way to San Cristobal! Something I didn’t really know at the time to be honest. I had basically got a 3 hour taxi ride for a few dollars. 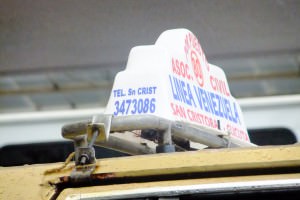 My Linea Venezuela Taxi that I got in Cucuta, Colombia.

So I got in and was joined by 4 others. All Venezuelans returning home. None of them needed to get in or out at immigration as Colombians and Venezuelans don’t need checked and my taxi driver was spot on. I asked him in broken Spanish to stop for me at both border points and he did. Within minutes we had sped out of Cucuta in Colombia and I hopped out, joined a short queue and got my Colombian exit stamp. That much was EASY. 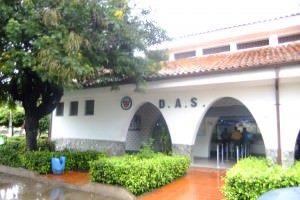 Then we crossed a bridge on the taxi, I saw the Bienvenido de Venezuela signs and we arrived at the Venezuelan immigration point. I had to get out and get my entrance stamp. I agreed with my taxi driver to meet me on the other side of the booth and that I would pretend I only had one big bag with me. My hand luggage/smaller backpack we wouldn’t declare. I didn’t want these guys going through it, as I had an inkling they would. I was right. They wanted to check my big bag, which they did. 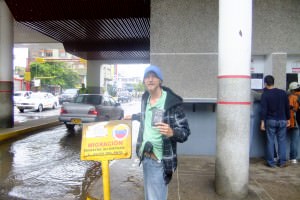 Arrival in Venezuela at San Antonio Del Tachira. All is well so far. Got my passport stamped, but danger is just around the corner…

My memory is hazy and I’m going by my notes (even my previous posts have slightly different details on them). One guy holds a gun at the door, ushers me inside and asks me stuff. I pretend to know less Spanish than I do and answer all of their questions in broken Spanish and part English. After fully checking my bag, I’m let through and reunited with the taxi driver and my fellow passengers who waited for me. They’re a bit angry to be sharing with a foreigner and I can tell, I have held them back at least 20 minutes so far. 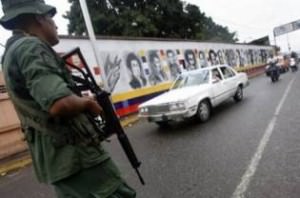 The day a guy holding a gun gave me a free orange juice in Venezuela!

Now we pass through the border town of San Antonio Del Tachira and I reckon I’m safely in Venezuela. But honestly this place is drenched in army and way too much security. Our car and myself are completely singled out for extra attention, because of me. Do I really look that foreign. Traffic is slow at these checkpoints and the police usher me out of the car with guns. They’re curious. 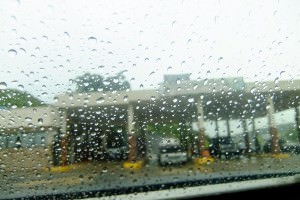 One of many border checkpoints. I also pretended I didnt have a camera.

Why would a globetrotting Northern Irishman be here, crossing into Venezuela? It must be related to guns and drugs right? One of them shouts Belfast at another and they call me in again. I’m dressed like a tramp. Long hair, unshaven and unattractive beard. Plain green polo shirt, dirty shorts and socks and shoes that in all honesty had seen better days. Did they presume I was working undercover for the UVF or IRA? How did they know the innocent “Newtownards” on my passport was near Belfast? I’ll admit it. I looked horrendous. And I hadn’t washed in 2 days. 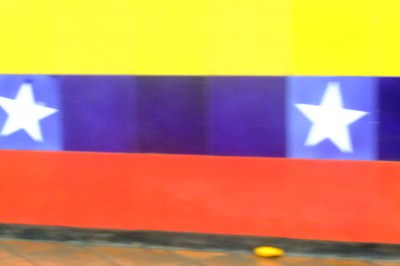 My first glimpse of Venezuela was this flag from the taxi…

I’m just remembering how I hid my small backpack and my valuables in the car and told the others not to sweat. The irony was clear to see. Sweat was dripping down me and I prayed a lot that morning. I thought, for whatever reason they would stitch me up, arrest me, chuck me out of the country or even kill me. Yes it crossed my mind. But honestly I was bouyant. I had crossed into my 50th country that day and thought maybe that’s it – I’ve been to 50 countries. That’s it. I’m out. But I smiled to myself.

Then a tough Venezuelan soldier walks over to me. I must stress at this point that I’m the only foreigner I’ve seen for days (not counting Colombians and Venezuelans) and I was getting singled out. The Venezuelan soldier has a tough face and I stare at him as if to ask him “what’s the fucking problem mate?” I wanted to go nuts. But they all had guns. This guy had a gun in one hand and an orange juice in the other. He hands me the orange juice and says “here mate drink this. You’ll be waiting a while”. (well in Spanish). Did I just see that right?? Yes a guy holding a guy gave me a free glass of orange juice. That won’t ever happen again in my lifetime. Gun in one hand and Sunny Delight in the other. I laughed at him then thought “maybe it’s drugged?”.

Imagination got the better of me, I drank it, the guy chucked my bag over “we got nothing on this eejit, he’s just a travelling Northern Irishman” they shouted in Spanish. Nobody laughed. Back in the car and we’re off again. Relief.

No. 5 minutes later another stop. Everything taken out of my bag and pockets and searched. All passport stamps checked and asked these questions:

Them “what were you doing in Bolivia?” Me “Backpacking in La Paz”

Them “what were you doing in Colombia?” me “Visiting my mate”

Them “what were you doing in Peru?” Me “Backpacking to Machu Picchu”

Them “what were you doing in Australia?” Me “Feeding kangaroos”

Them “what were you doing in Taiwan?” Me “Relaxing on beaches”

Another sweat but released again. My taxi mates were going schitz at this point. I’d held them back at least an hour. Next time I’m back in the taxi I duck down (no idea why this would help, but assumed I looked totally foreign). Even covered myself with my jacket for a while – seemed to work – it was 20 minutes until the next check point. I got through that and within an hour we had veered into the claustrophobic mayhem of San Cristobal.

It was relentless. It was tiring and I was done with it all. I just wanted to lie down and relax or sit with a beer and speak to my family or something. Looking back now it just seems ridiculous that they checked me 5 times. I was going mad but I had to keep sane.

The same day Venezuela had a black market crash. I spent only 4 days in the country in the end. I ignored the option of visiting Merida to see the world’s biggest ice cream shop (couldn’t be arsed with 5 checkpoints just to eat an ice cream) and I gave a by ball to Angel Falls (Salto Angel). After arriving in Caracas and having more mishaps, I finally got a Suriname Visa and got the fuck out. Relaxing in Paramaribo was a God send. I was truly blessed.

I have never heard of anyone else having a bad experience in Venezuela by the way. I have no reason why everything went wrong for me there, but it did and I don’t like the place. I hate it. I don’t recommend solo travellers to go there alone without knowing anybody. In fact I don’t recommend crossing the border from Cucuta to San Antonio del Tachira. It’s dodgy as hell. Maybe I was lucky to get through it all…here’s a never before seen photo (because it’s a crap photo) of me first time I had a beer and smiled again after this! 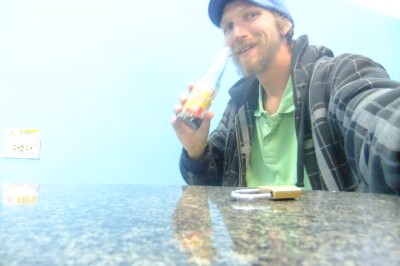 I read recently that Caracas is the third worst city in the world for murders, Cucuta in Colombia appears on the same list.

As ever, and more importantly than normal, SAFE travels.

These videos show a bit of my stress just afterwards, but even my writing on here and in previous posts can’t portray what actually happened that day. It was all so crazy…